Explained: How a Small Atoll Played a Part in the Roller-Coaster Ride in Indian-Maldivian Ties

Uthuru Thilafalhu has a highly strategic setting and for years has been integral to New Delhi and Malé's considerations.

New Delhi: Eight years after the project was first broached, India and Maldives have signed an agreement to develop and maintain a coastguard harbour and dockyard at Uthuru Thilafalhu – a strategically located atoll near the Maldivian capital of Malé.

This standalone agreement remained the biggest development, even though on the last day of his two-day visit, Minister of External Affairs S. Jaishankar announced a line of credit worth $50 million for defence projects.

The Wire analyses why the project assumed importance and grew to prominence. 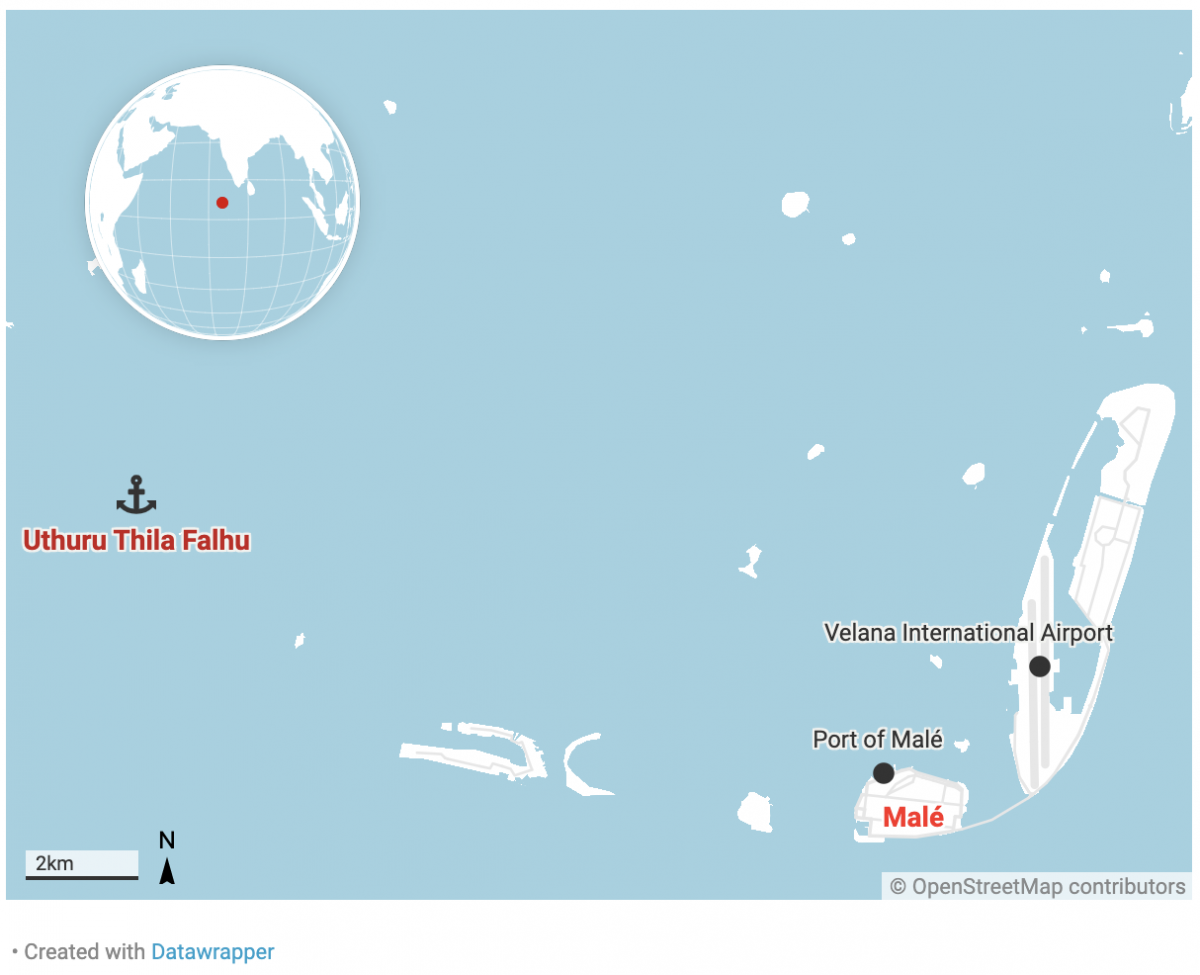 The first reports about the project emerged in early 2013. On a windy day in August that year, then defence minister Mohamed Nazim inaugurated the project with an excavator, symbolically reclaiming soil from the shores of the island.

Maldivian media reported that the first phase of the project, which included a dockyard for coast guard vessels, was to be completed in January 2014. That schedule was clearly ambitious. The foundation stone of the first building on Uthuru Thilafalhu, a mosque, was laid in December 2013.

The construction there, as per a Minivan News report of October 2014, had said that an Maldives National Defence Force-backed welfare society, SIWEC, was involved in the construction, which included “dockyard, slipway, warehouse and bunkering facilities”. Nazim, who continued as defence minister in Abdulla Yameen’s early presidential years before he was jailed, was looking at mixed-use development to “end military dependence for welfare on state budget”.

When did India begin to take an interest?

In February 2014, Indian foreign secretary Sujatha Singh visited Maldives to participate in a SAARC ministerial meeting. On the sidelines, she travelled from the capital to Uthuru Thilafalhu. The project’s importance could be ascertained by the high-powered escort provided for Singh – it comprised not only the chief of Maldives defence forces, but also defence minister Mohamed Nazim himself.

The photographs of the visit depict Maldivian officials showing her the atoll’s strategic location, walking her through the under-construction buildings, and making a presentation on the project. It was not known publicly at the time that Sujatha Singh’s visit came about 10 months after the Maldives government first approached India to take up the project.

After Indian Army chief Bikram Singh visited Maldives in May 2014, there was speculation that India had agreed to participate. However, the Maldives government was not yet ready to go public. A few days after the Indian Army chief’s visit, Nazim told local media that no offer was received from the Indian government to build a dockyard at UTF.

So why did Maldives’s defence pact with India in 2016 include the development of Uthuru Thilafalhu?

With President Yameen in office, it became apparent that despite an avowed ‘India First policy’, he was interested in moving closer to Beijing and seeking a stronger presence in the Indian Ocean region. India had looked on with rising dismay as Maldives moved to embrace China’s Belt and Road project.

Having won a contentious presidential election, Yameen was also looking to quell any domestic opposition with an iron hand. In March 2015, he had arrested principal opposition leader, former President Mohamed Nasheed, and imprisoned his own defence minister Nazim on terror charges. Over the next year, Yameen added another former defence minister, a former prosecutor general and a former vice-president to the prison rolls.

Yameen’s arbitrary actions led the Commonwealth to take an interest in prescribing steps to steer Maldives in a more democratic direction.

In February 2014, the Commonwealth Ministerial Action Group (CMAG), of which India is a member, listed a series of steps that Maldives had to take in order to avoid being put on the formal agenda – which could eventually lead to suspension or expulsion from the multilateral body.

The next meeting was scheduled for April 21. But, just 10 days before the CMAG meeting, Yameen rushed to India to seek “continued support in preventing any unfair, any punitive action by CMAG on the Maldives”.

It was against this backdrop that India got the opportunity to sign the first formal defence agreement with Maldives during Yameen’s visit.

The Action Plan on Defence Cooperation was an umbrella agreement which listed a number of proposals for implementation – ranging from coastal surveillance radars to hydrography survey and capacity building.

Under the category of “Infrastructure Development”, the 2016 Action Plan stated that India shall “partner” with the Maldives at Uthuru Thilafalhu for “setting up dockyard facilities and other facilities for MNDF”. It added, “The Maldives side would enable the use of such infrastructure facilities by Indian Navy/Coast Guard for training, HADR and optional requirements for surveillance of the EEZ”.

Underlining the significance of the coastguard project, the atoll was specifically mentioned by Prime Minister Narendra Modi in his public remarks, with Yameen standing next to him. “India and Maldives will jointly develop port-related facilities at Uthuru Thilafalhu,” he said on April 11, 2016.

At the April meeting in London, CMAG gave a reprieve of five months to Yameen but also recorded its “concern that there was little or no evidence of substantive progress achieved in the areas of concern raised”. India tried to give some space to Yameen, but New Delhi had also not been happy with the Maldivian president.

One of the key points of the Action Plan was to set up a mechanism of a Defence Cooperation dialogue at the defence secretary level. The first meeting was held four months after Yameen’s visit in July 2016. The UTF project was on the agenda. It would be another two years before this was discussed formally again between India and Maldives.

Meanwhile, Indian officials felt that there was a deliberate go-slow from Malé on India’s role in Uthuru Thillafalhu, mainly under Chinese pressure. However, with UTF project included in the framework defence agreement, it would have been difficult for the Yameen government to push out India.

Interestingly, one of the many plans that was in the defence agreement was on continuing assistance in setting up a Coastal Surveillance radar system. One of the ten radars was to have been installed in the island, but the Yameen government had delayed the installation by stopping the technical officials from going to UTF.

How did it change with the new government?

The emphatic victory of the joint opposition candidate in the November 2018 elections meant that there was a friendlier administration in Malé for India. India was quick to move, with Prime Minister Narendra Modi attending Ibrahim Solih’s presidential inauguration and finally making the much-delayed official visit to Maldives.

After the new government took over in January 2019, reports had speculated that UTF project would be turned into an Indian naval base. Maldivian chief of defence forces, Major-General Abdulla Shamaal said that Indian government had indicated that it will provide grant assistance, but there were no plans of any Indian naval base. “I want to be very clear on this point. I take this opportunity to provide assurance there is no plan to allow establishment of a foreign military base in Maldives, whether on a permanent basis, or temporary basis,” he added.

A slew of new projects, including lines of credits and major infrastructure projects, have been announced and implemented since 2019. Under the Action Plan, India was supposed to deliver a Dornier aircraft to Maldives for EEZ surveillance. It was delivered in September 2020.

The opposition alliance, made up of Progressive Party of Maldives (PPM) and the People’s National Congress, had been trying to corner the MDP government by claiming that Maldives was being “sold” to India. There were weekly protests and rallies under an ‘India Out’ campaign.

The arrival of the Dornier aircraft further triggered the opposition parliamentarians, who claimed that Indian military personnel stationed for operating aircraft in Maldives was a violation of sovereignty.

Major General Shamaal noted that “technicians, technical personnel serving humanitarian purposes [and those] aiding us and fulfilling our needs are working in Maldives”.

He described a foreign military presence as “armed officers with ulterior motives,” which was not the case in Maldives.

As reported in local media, Maldives military chief said that foreign personnel are currently operating the helicopters gifted from India, as local pilots were unavailable. Indian officers had also supervising the maintenance and refuelling of the helicopters, as per the bilateral agreement. He had added that Maldivian pilots were being trained to operate the helicopters in the future.

What does the new UTF agreement encompass?

Sources described the agreement signed by the Maldivian defence minister Mariya Didi and external affairs minister Jaishankar as a “breakthrough” in the saga of the UTF project.

The joint statement issued at the end of the visit, for the first time, officially puts on paper that the Maldives had approached India for assistance in the project during the presidency of Mohamed Waheed Hassan in 2013.

Defence minister Nazim had travelled to India on an official visit in April 2013. The political relationship between India and Maldives, at that time, had been under stress and was trying to recover from the setback of the Waheed government unilaterally cancelling the contract for India’s GMR group to develop the Malé international airport.

The joint statement then goes on to say:

“Further, the Agreement is pursuant to the Action Plan for Defence Cooperation signed on 11 April 2016 signed between both countries, and subsequent discussions held during the Defence Cooperation Dialogues in July 2016 and January 2019, and in accordance with the Terms of Reference for the project discussed during the Joint Staff Talks in June 2018, January 2019, and June 2019, and agreed in September 2019.”

The agreement has not been made public, but after the signing of the UTF agreement, MNDF held a press conference.

As per media reports, Maldives vice chief of defence force, Brigadier General Abdul Raheem Abdul Latheef, said that the project was a not a military base but the development of a harbour to dock, maintain and repair MNDF coast guard vessels.

He also stated that “Indian developers are expected to be active at the UTF Coast Guard harbour during phase 1 of development, which is expected to conclude within a period of three years”.

In the second phase, India will provide professionals who will facilitate technical and logistics support to the dockyard for a period of 15 years.

What has been domestic reaction in Maldives?

After the agreement was signed and the press conference was held, there was an immediate negative reaction from the opposition PPM members.

The list of dates about when the project was proposed and discussed in the joint statement was clearly done with an eye to blunt any opposition objection by conveying that the project was conceived and agreed by the previous governments.

A day after the agreement was signed, the opposition moved an emergency motion in parliament to call, among other things, the disclosure of the agreement on Uthuru Thilafalhu.

Moving the motion on Tuesday, PPM member of parliament Ahmed Shiyam claimed that the dockyard project would be for “based is for the actual purpose of basing Indian military personnel at the base”.

He admitted that the project had been floated during President Yameen’s administration, but stated that “the conditions and terms set out by India were not acceptable to the Maldivian government, which had rejected the agreement due to the reason”.

As per Maldivian media outlet Sun, Shiyam asserted that the agreement “included terminology to mislead the public such as rephrasing the designation of Indian military personnel to terms such as technicians and officials to allow them to be based at the location”.

Incidentally, Jaishankar had met with leaders of the opposition coalition during the visit to Maldives, which included former President Mohamed Waheed.