The first fully industrialised war prompted many to draw parallels between human society and the insect world. 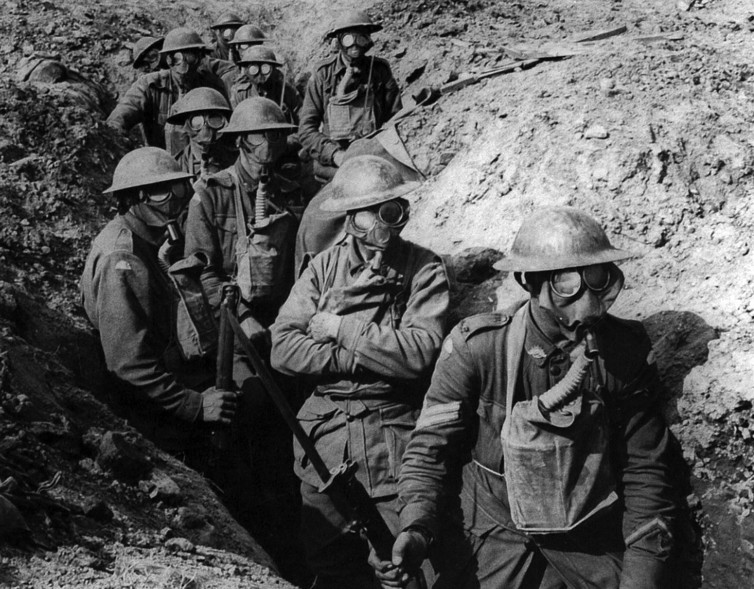 “The soldier is no longer a noble figure,” observed the war poet Siegfried Sassoon while serving on the Western Front. “He is merely a writhing insect among this ghastly folly of destruction.”

It is little surprise that Sassoon turned to insects to express the plight of the World War I soldier. Many did. Bugs – both real and metaphorical – came to shape the way people thought and wrote about the experience of war, and this prompted a surge of popular interest in insects more generally.

This was the first fully industrialised, long-range conflict, in which the enemy was reduced to minute specks. On the front line, soldiers wore bug-like gas masks and camouflage uniforms for the first time, were strapped into new prototypes of military body armour, and crawled through the mud in tanks. The optics of war even caused the modernist writer Wyndham Lewis, who served as an artillery officer, to remark: “These battles are more like ant fights than anything we have done in this way up to now.”

The striking resemblance between humans and insects also stemmed from their close proximity on the battlefield. Lice, mosquitoes and flies thrived in the trenches, quickly becoming one of the main sources of illness and death among soldiers. Faced with the rapid spread of typhus, malaria, and trench fever (spread by lice), the War Office teamed up with entomologists to tackle this enemy within.

This led to a campaign of insect extermination, in which troops were regularly disinfected with chemicals designed to halt the spread of lice. Yet while this was going on, soldiers were also being subjected to poisonous gases from the enemy, some of which had previously been used as insecticides. One Dutch newspaper was quick to notice the parallel treatment of soldiers and insects.

In this satirical illustration from May 1915, the female embodiment of Germany, “Germania”, sprinkles insect powder over a tiny group of soldiers. At first glance, she appears to be delousing them, but she is in fact exterminating them with chlorine.

Yet if the conditions of war reduced human beings to bugs, then it was to these life forms that people turned in search of ways of understanding their predicament.

Perhaps because people felt closer to insects than ever, in the period around World War I a craze for popular entomology developed.

Studies of insect life were in high demand, with more books devoted solely to bugs than ever before. Of particular interest to the British public was the work of French entomologist Jean-Henri Casimir Fabre, whose groundbreaking and often gruesome studies of the behaviour of wasps, beetles, mantises, and flies sold widely in the years surrounding the war. Fabre was a pioneering figure in the life sciences who demonstrated that more could be learnt about insects as living entities observed in their natural habitats than as dead specimens pinned in display cases.

The development of new film technologies also meant that the sophisticated behaviour of insects could be made visible to the human eye. In November 1908, nature documentary maker F. Percy Smith’s The Acrobatic Fly caused a stir when it was screened at a London cinema. Advertised on the front page of The Daily Mirror, the short film consisted of remarkable footage of a fly juggling various miniature items with its front legs.

After the war, the public appetite for bugs on screen continued to grow. From 1922, a series of nature shorts called Secrets of Nature was screened in British cinemas. Many of the films focused on the hidden lives of ants, wasps and beetles.

This popular bug interest was also seen in the more canonical cultural output of the period. The films and popular insect books mentioned above were a source of fascination for modernist writers and thinkers, including Virginia Woolf, D.H. Lawrence, Ezra Pound, Katherine Mansfield, and Marianne Moore, who listed Fabre’s ten-volume collection, Souvenirs entomologiques (Entomological memories), in a list of “great literary works”. The poet William Carlos Williams even remarked: “Henri Fabre has been one of my Gods.”

Some writers were inspired by the remarkable ability of insects to thrive in inhospitable environments. Set during the war, Lawrence’s novella The Ladybird draws on Fabre’s account of the “sacred beetle” (also known as the dung beetle), which sculpts the waste products of larger animals into a home for its offspring. The text highlights the ingenuity of the dung beetle, emphasising its ability to transform death and decay into a source of new life.

Others were drawn to Fabre’s account of the unique ways that insects perceive their surroundings. One of Wyndham Lewis’s characters remarks enviously that “the insect sees a different world to us, and possesses other means of apprehending it”, while in Woolf’s novel To The Lighthouse, artist Lily Briscoe longs to experience the compound vision of ants: “One wanted fifty pairs of eyes to see with.”

The turn to popular entomology in the years surrounding the war was no coincidence. While insects may have come to represent the degraded nature of human existence, studies of bug life helped writers and artists, as well as the public at large, to look beyond the wartime atmosphere of destruction, and to develop new ways of seeing themselves and the world around them.

Rachel Murray is a PhD candidate at the University of Bristol.