Was the early conception of IS a branching-out of the old Baath party? Or was it, as some argue, completely separate with no connection at all? Reality is probably a bit of a mix of both.

Was the early conception of IS a branching-out of the old Baath party? Or was it, as some argue, completely separate with no connection at all? Reality is probably a bit of a mix of both. 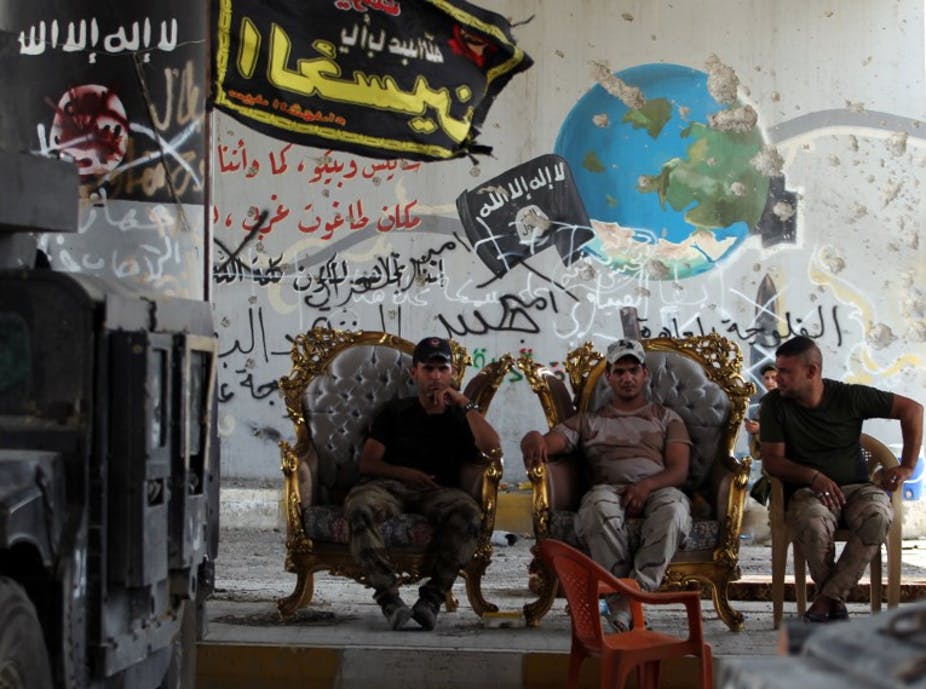 Members of the Iraqi police forces sit outside a building in the city of Fallujah on June 30, 2016 after they’ve recaptured the city from Islamic State (IS) group jihadists. Credit: Reuters

In an interrogation video broadcast by the Syrian Democratic Forces (SDF) on January 10, 2018, French jihadist Thomas Barnouin accused the Islamic State (IS) or Daesh, which he had previously joined, of being the criminal creation of former Baath party members, aided by Western intelligence services.

While his allegations sounded like a familiar conspiracy account and were noticeably the result of manipulation by his Kurdish jailers, they once again revived the old controversy of the ties between Iraq’s former Baathist regime and IS, under scrutiny since at least 2015.

A former colonel in the Iraqi forces who maintained an association with the intelligence, al-Khlifawi was presented by Reuter as the agent of a cynical attempt, through his IS allegiance, to recast the past dictatorship. Meanwhile, a number of IS fighters were killed by the Iraqi government. The coalition often presented them as secret agents of the defunct Iraqi regime. 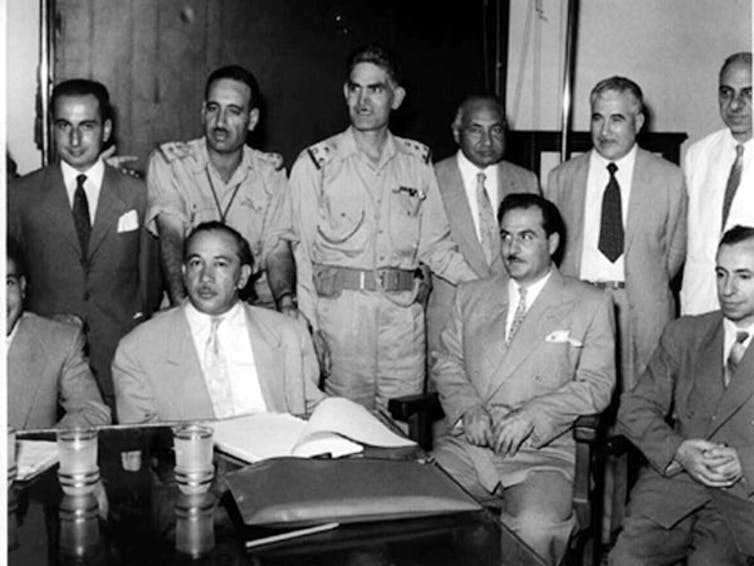 Baathism was originally a revolutionary secular ideology theorised by Syrian nationalists Zaki al-Arsuzi and Michel Aflaq in the early 1940s. It promoted the establishment of a unified Arab state, just like IS and other jihadist movements have advocated its “Islamic” version.

The thesis of a Baath–Islamic State connection has gathered a large audience since Reuter’s publication, many considering IS as the manifestation of the former tyrant’s party. However, the confusion generated by this debate has contributed to projecting a deeply flawed historical and sociological image of IS.

A heated discussion continues, as some scholars refute any such influence of Saddam Hussein’s late order, claiming that IS is primarily the consequence of a decade-long foreign occupation and its dramatic effects. Others, often on ideological grounds, bring forward the opposite view: They claim that even before the US entered the war there was a possible connection between Saddam Hussein’s regime and the newly forming organisation later known as IS. Indeed, many in the late 1990s felt that the Baathist system was coming to an end and were hungry for a new political project.

In 2003, Iraqi officers and soldiers were sacked by the US-led “debaathification” measure. It dissolved the Iraqi regime’s political structures and was so poorly designed and executed that it contributed to the collapse of the state and the rise of radical armed violence.

Concomitantly, the Iraqi army’s dismantlement – at least 250,000 soldiers were dismissed – pushed many to join insurgent cells in the country. However, insofar as these circumstances help shed light on one specific sequence of the Iraqi conflict, they do not prove that Baathist loyalists had colluded with jihadist factions before the war. 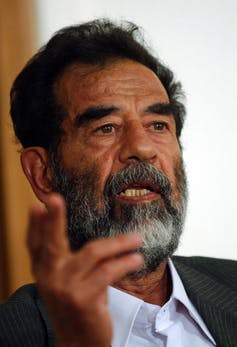 Saddam Hussein during his trial in 2004. Credit: DR/Wikimedia

Even though Saddam Hussein constantly referred to jihad himself – against “external aggression” and “traitors” – no real evidence ever emerged that had planned an uprising before 2003 or initiated contact with transnational jihadist movements. Besides, his relationship with Sunni Islamism had essentially been hostile throughout his reign.

This did not deter hundreds of Iraqi Sunni Arabs – former personnel of the regime and also more ordinary citizens – from joining the insurgency after Hussein’s fall, at a time when the occupation was becoming an everyday fact for the population. These men all headed toward nationalist groups, Salafist factions as well as IS, which was the only one truly promising a political revolution through the establishment of a “caliphate”. By then, only a handful of loyalists were left to save Saddam’s failed order.

In sum, was the early conception of IS an offspring of the old Baath party? Or was it completely separate, with no connection at all? Reality is probably a bit of a mix of both. IS has been influenced by ex-Baath party members but embraced a new ideology, Salafism-Jihadism.

A legacy of violence

All this considered, has IS’s “religiosity” been somewhat overstated by some commentators, leading to downplay its quest for political power aided by former Baathists? Even though the spread of Salafism among Sunni communities in Iraq favoured its hegemonic enterprise, the so-called “religious” propaganda of IS must be considered with caution. One can argue, indeed, that the group’s ostentatious religiosity is not what attracted Baath party members and nationalists. One can also assume that the group’s leaders used an “Islamist cover” to serve their political goals, separately (or not) from their old Baathist belonging.

The propagation of Salafism in Iraq was prior to the embargo of the 1990s and took root in Sunni circles – including the regime’s own military and security personnel – during the war against Iran (1980-1988). At the time, piety gave hope to those who no longer believed in Arab and Iraqi nationalism as a vehicle for restoring the country’s dignity.

Moreover, a deliquescent Baathist ideology – originally secular – paved the way for the expansion of the rigorist Sunni doctrine. If proof were needed, in 1993 Saddam Hussein launched his notorious “national faith campaign” (al-hamla al-wataniyya al-imaniyya) to make Islam a political resource and regain standing and legitimacy in the eyes of his people. This campaign favoured the development of puritan Islam among the Sunni community, its Salafist version in particular.

To date, the former regime has also survived through a legacy of violence and tyranny that IS embodied in its most accomplished form between 2014 and 2017. Thousands of young Iraqi Sunnis – some of whom later turned jihadists – grew up in a world extreme brutality and inherited a totalitarian conception of society.

Like the Baathist ideology in its time, IS’s takfirist discourse, excommunicating Muslims on the basis of their supposed apostasy and promoted by Jordanian jihadist Abu Musab al-Zarqawi and his Iraqi followers, is inseparable from the cycles of civil conflict that have plagued Iraq. It may re-erupt as IS has not been entirely defeated on the ground.