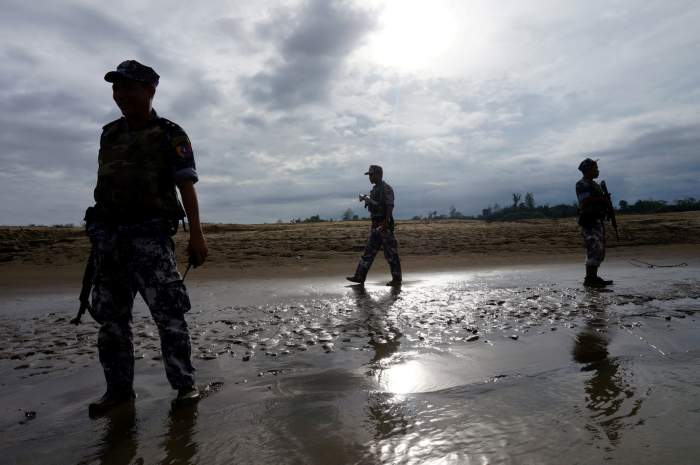 Yangon: Muslim militants in Myanmar staged a coordinated attack on 30 police posts and an army base in Rakhine state on Friday, and at least 59 of the insurgents and 12 members of the security forces were killed, the army and government said.

The fighting – still going on in some areas – marked a major escalation in a simmering conflict in the northwestern state since last October, when similar attacks prompted a big military sweep beset by allegations of serious human rights abuses.

The Arakan Rohingya Salvation Army (ARSA), a group previously known as Harakah al-Yaqin, which instigated the October attacks, claimed responsibility for the early morning offensive, and warned of more.

The treatment of approximately 1.1 million Muslim Rohingya has emerged as majority Buddhist Myanmar‘s most contentious human rights issue as it makes a transition from decades of harsh military rule.

It now appears to have spawned a potent insurgency which has grown in size, observers say.

They worry that the attacks – much larger and better organised than those in October – will spark an even more aggressive army response and trigger communal clashes between Muslims and Buddhist ethnic Rakhines.

A news team affiliated with the office of national leader, Aung San Suu Kyi, said that one soldier, one immigration officer, 10 policemen and 59 insurgents had been killed in the fighting.

“In the early morning at 1 am, the extremist Bengali insurgents started their attack on the police post … with the man-made bombs and small weapons,” said the army in a separate statement, referring to the Rohingya by a derogatory term implying they are interlopers from Bangladesh.

The militants also used sticks and swords and destroyed bridges with explosives, the army said.

The Rohingya are denied citizenship and are seen by many in Myanmar as illegal immigrants from Bangladesh, despite claiming roots in the region that go back centuries, with communities marginalized and occasionally subjected to communal violence.

The military counter-offensive in October resulted in some 87,000 Rohingya fleeing to Bangladesh, where they joined many others who have fled from Myanmar over the past 25 years.

The UN said Myanmar‘s security forces likely committed crimes against humanity in the offensive that began in October. On Friday, the UN condemned the militant attacks and called for all parties to refrain from violence.

The US also condemned the attacks on security forces and it warned the government against indiscriminate reprisals.

“As government and security forces act to prevent further violence and bring those responsible for the attacks to justice, we expect them to do so in a way that is consistent with the rule of law, protects and respects human rights and fundamental freedoms, demonstrates transparency, and avoids inflaming a tense situation,” the US state department said in a statement.

The military said about 150 Rohingya attacked an army base in Taung Bazar village in Buthidaung township.

Among the police posts attacked was a station in the majority-Rakhine village of Kyauk Pandu, 40 km (24 miles) south of the major town of Maungdaw.

Police officer Kyaw Win Tun said the insurgents burned down the post and police had been called to gather at a main station.

Residents were fearful as darkness approached.

“We heard that a lot of Muslim villagers are grouping together, they will make more attacks on us when the sun goes down,” said Maung Maung Chay, a Rakhine villager from the hamlet.

The attack took place hours after a panel led by the former UN chief Kofi Annan advised the government on long-term solutions for the violence-riven state.

Annan condemned the violence on Friday, saying “no cause can justify such brutality and senseless killing”.

‘Running for our lives’

Military sources told Reuters they estimated 1,000 insurgents took part in the offensive and it encompassed both Maungdaw and Buthidaung townships – a much wider area compared with October.

The leader of ARSA, Ata Ullah, has said hundreds of young Rohingya have joined the group, which says it is waging a legitimate defence against the army and for human rights.

“We have been taking our defensive actions against the Burmese marauding forces in more than 25 different places across the region. More soon!” the group said on Twitter.

Chris Lewa of the Rohingya monitoring group, the Arakan Project, said a major concern was what happened to some 700 Rohingya villagers trapped inside their section of Zay Di Pyin village which had been surrounded by Rakhine vigilantes armed with sticks and swords.

“We are running for our lives,” said one of the Zay Di Pyin’s Rohingya villagers reached by telephone, adding that houses had been set on fire. The government said the village had been burned down but blamed the fire on the Rohingya.

Amid rising tension over the past few weeks, more than 1,000 new refugees have fled to Bangladesh, where border guards on Friday pushed back 146 people trying to flee the violence.

Mohammed Shafi, who lives in a Rohingya refugee camp in Bangladesh, said his cousin in Myanmar had told him of the trouble.

“The military is everywhere. People are crying, mourning the dead,” Shafi said.