Voices of Despair From a Refugee Camp in Greece

More than a year after the EU-Turkey deal, the number of asylum seekers arriving in Greece has reduced drastically while those already stuck are suspended in a state of uncertainty.

Other camps such as this one in Cherso, close to Greece’s border with Former Yugoslav Republic of Macedonia. This camp shut earlier this year and refugees were transferred to other reception facilities. Credit: Arjun Claire

In a crumbling warehouse, lost somewhere in an industrial corner of Greece’s second largest city, Thessaloniki, daylight barely makes its way in before it dissolves into the darkness that reigns inside. The warehouse hosts several hundred refugees who live in serried rows of mouldy tents.

One late October morning last year, the warehouse appeared subdued: a middle-aged refugee vendor languidly arranged piles of cigarette packs, a yawning man tottered by, kneading his eyes and a young woman emerged from tent B-27.

“There is so much light during the night”, complains 28-year-old Humaida, pointing to the fluorescent bulbs that fall flat late into the night. “That is why I do not sleep well”. She then sniffs the air. “Doesn’t it still smell of drugs”, more a lamentation than a question. “People are on drugs here and they even go to other tents and shout”.

Mother of three children, Humaida has been living in the warehouse since May 2016, when her hopes to reach Germany were dashed after the Balkan borders shut. She is one of the over 50,000 people who found themselves marooned in Greece, blocked from travelling further into Europe. All those who languished along the border were then dispatched to over 50 camps hastily set up across mainland Greece. Humaida landed in one of the warehouse camps – the worst of the lot, according to several organisations working with refugees in the country.

Humaida was following on the heels of her husband who had made it to Germany a few months earlier. They had got by in Syria – she as a physiotherapist, he as a painter – until the war penetrated their neighbourhood. The house of her next-door friend was bombed; all 16 members of the family died. Humaida recalls how she almost collapsed after seeing her friend at the hospital. That was the day, Humaida says with an emotion-defying expression, the family resolved to find a way out of war-ravaged Syria.

Now after months in Greece, separated from her husband, she hints that the family may never come together. “Husbands are in different countries and there are many divorces”, she confides. “Even boys who are newly engaged do not wait for their fiancées”. Humaida does not have a phone so she has barely spoken to her partner in months.

Other camps such as this one in Cherso, close to Greece’s border with Former Yugoslav Republic of Macedonia. This camp shut earlier this year and refugees were transferred to other reception facilities. Credit: Arjun Claire

Way out of Greece

Humaida and others like her, now stranded in Greece, have limited options to make their way out of the country. They could either apply to reunite with their family members in Europe or hope that they are one of the 66,400 people EU countries have pledged to relocate from Greece. The lucky few who have some money can pay their way out of Greece. “Many people try to leave illegally”, she confirms. “It can cost up to 3,500 euros”.

She says she wouldn’t opt for the EU’s family reunion scheme – which would in principle allow her husband to sponsor his immediate family to join him in Germany. Family reunification often requires tedious paperwork to prove the relationship. But most often people simply don’t have any documents with them and with the state of affairs in their home countries, it is virtually impossible to source it from there. Even when they do have the documents, it can take over a year before families can reunite.

“Relocation would be much easier”, Humaida says. “I just want to leave from here”. 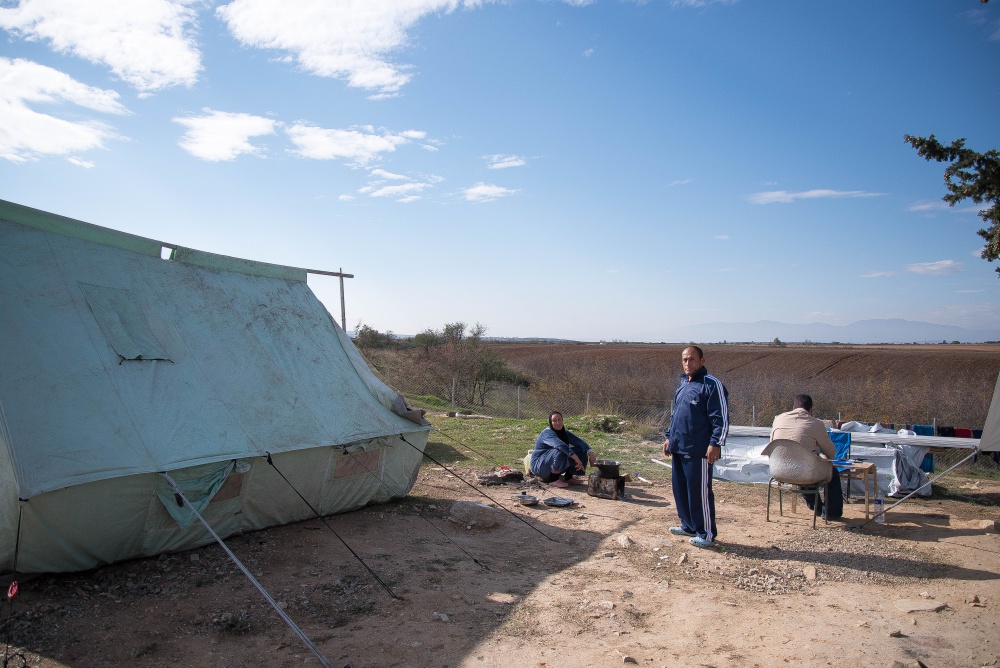 But the EU’s relocation scheme has been hobbled by delays. With only a few months before the programme ends in September 2017, just over 12,000 people have been relocated from Greece so far. Some eastern European countries such as Hungary, Poland or Austria have yet to take in a single person from Greece. At this rate, the pledge to relocate people will remain largely unfulfilled, unless the programme is extended.

Along with a deal EU struck with Turkey in March last year, Greece has become a trap for most who had undertaken the nerve-wracking sea journey to reach Germany and elsewhere. Although through the deal, EU bureaucrats hope to staunch the flow of people from Turkey in exchange for financial incentives, ensuring asylum seekers already in Greece do not cross further into Europe is also vital.

As a result, people now find themselves suspended in space and time that stretches infinitely, where the horizon of hope seems like a mirage that keeps shifting further away. Desperation, fatalism and hope play out in round circles. “People generally have hope for what comes, but for us we have hope for what was in the past”, frets a woman who lives in a camp close to Athens.

On the Islands, where most asylum seekers arrive, the numbers have been gradually increasing, leading to severe overcrowding. Following the EU-Turkey deal, asylum seekers are not allowed to leave the Islands unless they require emergency medical treatment. But more continue to arrive, although in much fewer numbers: over 5,000 have washed on Greek shores until April this year. As of mid-February, there were almost 13,000 asylum seekers on seven Greek Islands, while reception capacity at best does not exceed 9,000.

Lesvos alone hosts around 3,000 asylum seekers, most of whom live in the Moria detention centre. A few kilometres off the main town, Mytilene, Moria is a barbed encampment, slouching on a slope, where a majority of the asylum seekers are young men from South Asia and West Africa. Camping tents pitched randomly spread all around an enclosed area, where asylum interviews take place. Aid workers, asylum officials and security guards bustle with purpose; asylum seekers amble around, listless.

Tensions had been brewing for sometime before the situation dramatically spun out of control in October last year when a group of asylum seekers burnt the asylum office inside the detention centre. Things were to go from bad to worse in January, when poor living conditions in Moria led to the death of three asylum seekers.

A few days before the fire incident, a group of young men lamented that they were being discriminated against. Several had been in Moria for months and grew increasingly bitter as they saw newly-arrived asylum seekers from countries considered at war such as Syrians and Iraqis get preferential treatment in the asylum process. “There is inequality even in clothes distribution”, one said.

Many become so desperate that they resort to increasingly dangerous ways to reach the mainland. When security on ships headed to Athens tightened, so did the stakes. “Around 200 people illegally left for the mainland the other day hiding beneath trucks that were being shipped”, said an asylum seeker in Moria. After having taken enormous risks and spent all they had to reach so far, he said, there was no going back. 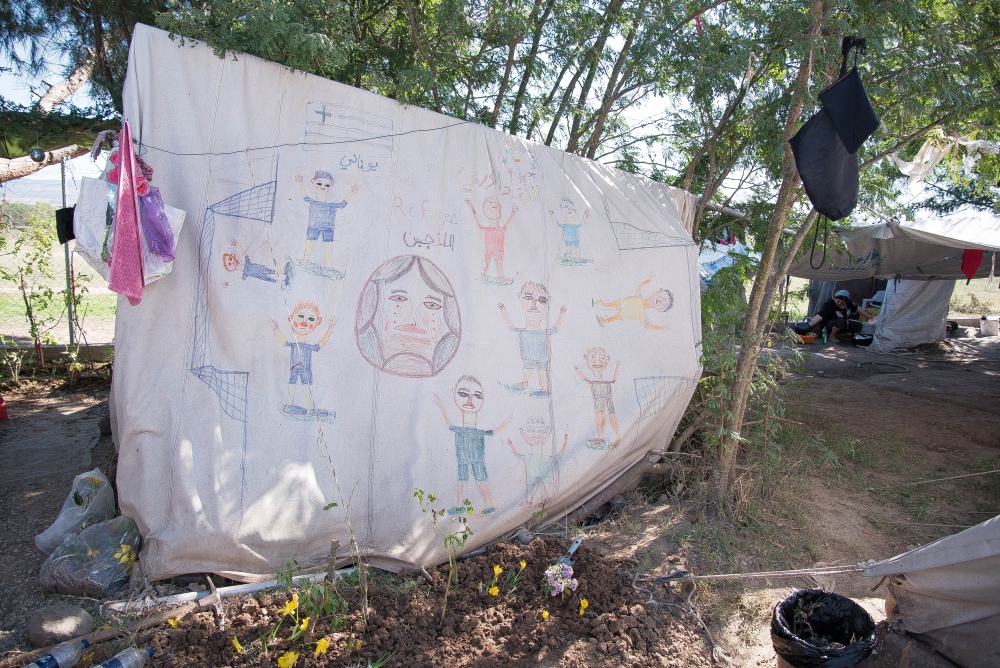 A painting by a Syrian man. Credit: Arjun Claire

“Tomorrow we will work”

Back in the warehouse, Humaida waited for her asylum interview, which was scheduled for November 11 last year, with a mixture of hope and dread. She wished she would be relocated to the UK, having adored the English language since she was a child. “If I reach England and they understand I am a nurse, they will take me”.

“I want to continue to study”, Humaida affirms, as her eyes brighten up. “I would love to work with children or take care of people in old age homes”.

Meanwhile, she says she is worried about her children’s future – they have been without education for a while now. “They have picked up Greek even without going to school. If they were to go to school, they would become smart”.

Lately her son’s pleas to have a bicycle gnaws at her. “It costs around 125 euros”, she sighs. “From where can I get that kind of money”.

Despite adversity, however, Humaida clings on to hope.

“It is ok”, she consoles herself, after a moment. “At least we have food. Tomorrow we will work and we will have money”.

The warehouse was evacuated in January 2017 and most people were either sent to apartments or were being hosted in other camps.

Arjun Claire is a humanitarian aid worker, currently based in Geneva