Despite the growth of radical groups propagating religious intolerance in Indonesia, the government has failed to take a strong stand. 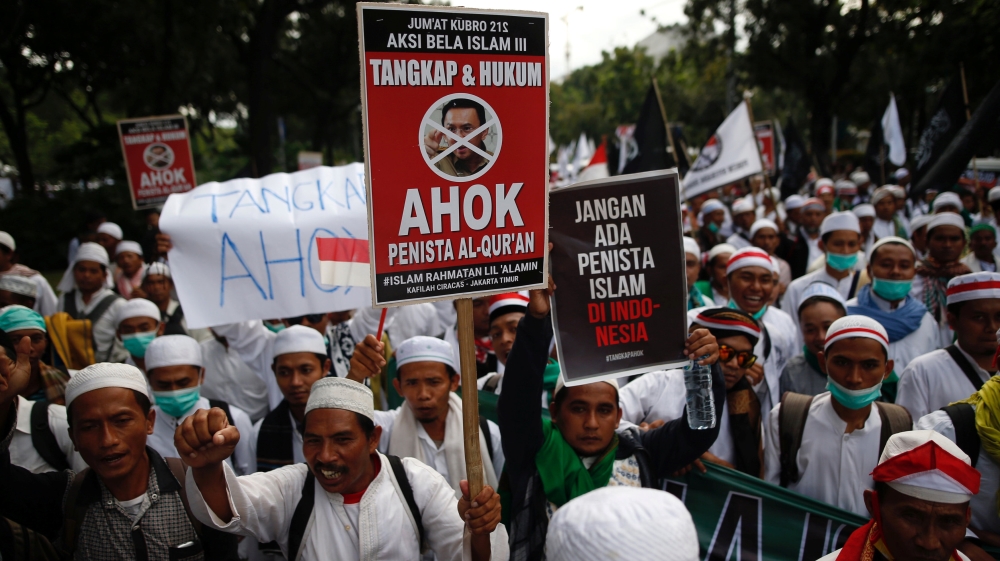 Last month, Jakarta’s governor Basuki Tjahaja Purnama, better known by the moniker Ahok, was sentenced to two years imprisonment for blasphemy against Islam. The sentence came as a shock to  many and was perceived not only as a worrisome message for minorities and moderate Muslims, but also as a fact undermining the country’s democracy, which is still consolidating. Ahok was in fact considered the symbol of Indonesia’s inclusiveness and secularism: he was the first Christian of Chinese descent – that is, a member of two minorities that are often target of prejudice, discrimination and violence – to occupy the important gubernatorial post in the capital of the world’s biggest Muslim country.

There are many reasons to believe that the case was politically contrived by Ahok’s rivals, who played the religious identity card in order to mobilise masses against the governor and get rid of him easily. (According to a controversial article, Donald Trump was also behind the anti-Ahok mass protests.) Yet, apart from the unscrupulousness of certain political personalities – something unsurprising since the elite has remained mostly unchanged since the fall of the dictator Suharto – Ahok’s imprisonment highlights another remarkable social development, that is the alarming and increasing clout of radical Islamic organisations on Indonesian society and politics.

The rise of radical Islam is not a new phenomenon in the Southeast Asian country. Spread peacefully by Sufi preachers coming from India and Persia (and thus generally moderate and pluralistic), since the early 1980s Indonesia’s Islam has been under Saudi Arabia’s conservative influence. The Middle Eastern country began to fund the creation of religious schools and circulate booklets and pamphlets promoting Wahhabism. The most immediate consequence of this was that radical versions of Islam, new in the archipelagic country, started competing with more tolerant versions of the same religion. It is not a coincidence that the Council of Indonesian Ulema (Majelis Ulama Indonesia, MUI), which defines the parameters of religious orthodoxy, took a more conservative stances, maintaining that Indonesia, from a secular state, had to be transformed into an Islamic state. Also more recently, this organ has fomented intolerant and violent behaviour against the religious Other, issuing fatwas forbidding marriages between Muslims and non-Muslims, encouraging the enforcement of sharia or depicting pluralism and liberalism as incompatible with the Islamic civilisation.

It is true the Islam promoted by MUI cannot be considered – at least for the time being – as the expression of the majority of Indonesian Muslims. Moderate organisations like Nahdlatul Ulama or Muhammadiya continue to have millions of members and are very active in condemning ISIS and the most intolerant interpretations of Islam. Nevertheless, it is undeniable that MUI’s propaganda has been fruitful over the years, straining the social fabric. As a matter of fact, radical groups have emerged since the late 1990s. Among these are the Islamic Defenders Front (Front Pembela Islam, FPI), notorious for its intolerance and violence against minorities and moderate Muslims, and al Qaeda-linked terrorist organisations, responsible for the attacks that shook Indonesia in the 2000s, like the terrible Bali bombings in 2002 that killed more than 200 people. Fortunately, today the new terror organisations claiming to be linked to ISIS consist of scattered cells and have proved to have limited capacities, even though this situation might change. According to experts, in fact, the lack of organisation and coordination shown so far could be explained by the fact that these groups, active also outside Indonesia, are focusing on the fight in Syria and Iraq. It is difficult to say what will happen later. However, the persistence of the FPI and other fundamentalist groups is alarming enough: presenting themselves as a sort of moral police, these organisations are very active in running mobilisation campaigns in favour of sharia law, in attacking restaurants, food stalls and cafes during the month of Ramadan, in fomenting hatred against religious minorities – included Shias and Ahmadiyya – going as far as destroying shrines and displacing people from their villages.

What is more, the government has an ambivalent attitude. On the one hand, it takes forceful military action against global terrorism-linked groups, on the other hand it wavers when it comes to adopting concrete measures to limit intolerance and violence against minorities or to loosen discriminatory laws, like the blasphemy one. This is probably because they fear that political consensus could be undermined. This is true also for the current president, Joko Widodo, who on several occasions has appeared cautious about denouncing radical Islam. The groups that are polarising the country along religious lines in the name of Islam are acquiring more and more influence, and their interests are often interwoven with those of unscrupulous politicians. Among such increasingly powerful groups there is undoubtedly the FPI, which played a crucial role in the anti-Ahok movement, adopting an incendiary racist rhetoric which recalled ghosts of the 1998 anti-Chinese riots.

It remains to be seen whether the government’s irresolution to tackle radical Islam will have negative consequences for the government itself and, more importantly, whether it will have repercussions on democracy and on coexistence – already difficult in several areas of the country – between communities. What we can certainly say now is that the signals are not encouraging at all. And this is even scarier if we consider that the radicalisation of Islam can provide fertile ground for the emboldening and proliferation of terrorist groups linked to ISIS, or inspired by them. ISIS which will extending its longa manus over Indonesia as a definite advantage, since besides hosting the world’s largest Muslim population, the country has a very important geo-strategic position.

This article was originally published in Italian in Glitch Magazine.

Elena Valdameri is a PhD in historical studies from the University of Milan.