In Latin America, Mexico Ranks Among Most Dangerous Countries for Journalists

The World Press Freedom Index warns that in Latin America, journalists are persecuted and murdered for investigating issues that affect political leaders. 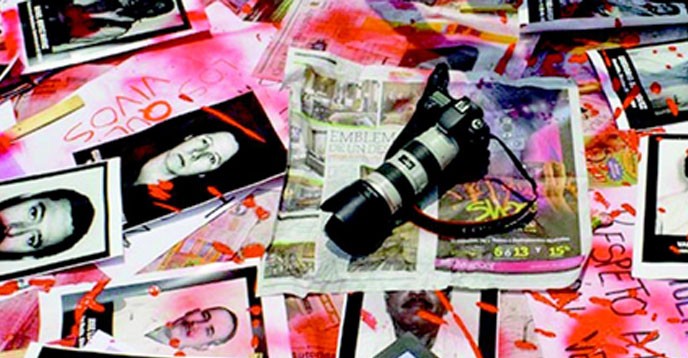 In September 2015 he survived an attempt on his life and because he was deemed at “very high risk” he became a beneficiary of the federal mechanism for protection for human right defenders and journalists created in December 2012.

The protection measures he was assigned consisted basically of police patrols. They offered him a place in a shelter in Mexico City, but he refused.

In October 2016, the protection measures were cancelled; five months later, Pineda Brito became the first journalist murdered in 2017 in the most dangerous country for reporters in Latin America.

Pineda Brito’s March 2 murder was followed by six weeks of terror in which three more journalists were killed and two others survived after being shot, in different parts of this country of 127 million people.

The highest-profile murder was that of Miroslava Breach, on March 26, a veteran journalist who covered political news for the La Jornada newspaper in the northern state of Chihuahua along the US border.

But Pineda Brito’s killing reflected the inefficacy of institutional mechanisms for protecting journalists in the region.

“Last year it became clear that the state’s protection model exported from Colombia to Mexico and recently to Honduras had failed,” said Ricardo González, security and protection officer of the London-based international organisation Article 19, which defends freedom of expression.

“The cases of journalists murdered in Mexico, who were under the protection of different state mechanisms, as well as the Freedom of the Press Foundation’s refusal to take part in the assessment of cases under the Colombian mechanism are things that should be of concern,” he told IPS.

For González, the lack of a functioning justice system and redress makes the model “ineffective, apart from financially unsustainable.”

The numbers in Mexico prove him right: according to Article 19’s latest report, of the 427 assaults on the media and journalists registered in 2016, 99.7% went unpunished.

Meanwhile, the Special Prosecutor’s Office for Crimes Against Freedom of Expression has only managed to secure a conviction in three cases.

Most of the attacks were against journalists who work for small media outlets outside the country’s capital and at least half of them were committed by state agents.

But even though the dangers are growing rather than decreasing, the government and the legislature cancelled the funds available for protection and since January the mechanism has been operating with the remnants of a trust fund whose 9.5 million dollars in reserves will run out in September.

According to Article 19, violence against the press is still one of the main challenges faced in Latin America and something to be reflected on when World Press Freedom Day is celebrated on May 3.

“In addition to Mexico, Honduras, Brazil and Colombia, the situation in Paraguay and Venezuela, in particular, reflects the deterioration of freedom of expression in the region,” said González. 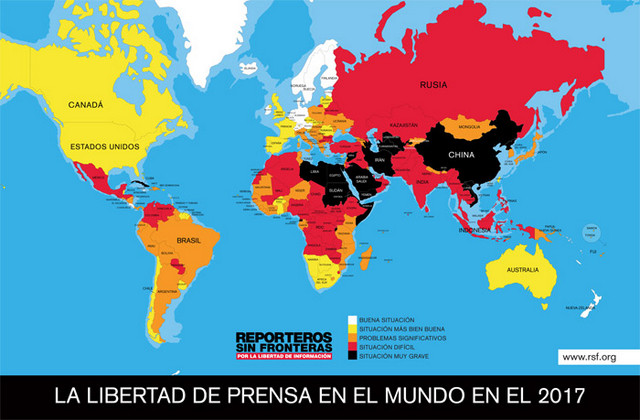 Map of the World Press Freedom Index, released April 26 by Reporters Without Borders, where Cuba (173rd of 180 countries) and Mexico (147th) are the worst positioned in Latin America, while Uruguay (25th) and Chile (33rd) top the regional ranking. Credit: RWB

In the same vein, the 2017 World Press Freedom Index published by Reporters Without Borders on Wednesday, April 26, warns about the political and economic instability seen in several countries of Latin America, where journalists who investigate questions that affect the interests of political leaders or organised crime are attacked, persecuted and murdered.

“RWB regrets the pernicious and continuous deterioration of the situation of freedom of expression in Latin America,” said Emmanuel Colombié, the head of the RWB Latin America desk, presenting the index.

“In the face of a multifaceted threat, journalists often have to practice self-censorship and even go into exile, to survive. This is absolutely unacceptable in democratic countries,” he added.

The RWB report underscores the case of Nicaragua, the country that experienced the largest drop in the index because since the controversial re-election of President Daniel Ortega, the independent and opposition press has suffered numerous cases of censorship, intimidation, harassment and arbitrary arrests. The country fell 17 spots, to 92nd among the 180 countries studied.

The report also describes Mexico as another worrisome case: in 15 years it dropped from 75th to 147th on the index, putting it next to Syria and Afghanistan. Mexico is still torn apart by corruption and the violence of organised crime, says RWB.

In fact, it is the second worst ranked Latin American country, after Cuba, which is 173rd, after dropping two spots.

At a regional level, the countries best-positioned in the ranking are Uruguay (25th, after falling five), Chile (33rd, after dropping two) and Argentina (50th, after going up four).

Despite the threats and risks, independent journalism is making progress in the region. In 2016, the organisation Sembramedia created the first directory of native digital media in Latin America which has listed more than 500 independent platforms.

But at the same time, the means of control of the independent press are getting more sophisticated, said González.

Legal, labour and online harassment, as well as indirect censorship through the control of state advertising are tools that governments and political and economic groups use ever more frequently around the region.

In Mexico, the most emblematic case is that of journalist Carmen Aristegui, who was fired together with her investigative journalism team from the MVS radio station after publishing an investigation about corruption implicating President Enrique Peña Nieto.

But there are even more unbelievable cases, such as a judge’s order for psychological tests for political scientist Sergio Aguayo, after he published well-substantiated information about massacres in the Mexican state of Coahuila, connected to former governor Humberto Moreira.

The organisation FUNDAR Centre for Analysis and Research has documented that this country’s central government and 32 state governments spend an average of 800 million dollars a year on official advertising and announcements in the media.

Another Mexican organisation committed to the defence of digital rights, R3D, reported that various regional governments have bought programmes from Hacking Team, an Italian cybersecurity firm that sells intrusion and surveillance capabilities to governments and companies on websites, social networks and email services.

According to R3D, online intimidation and monitoring have increased in Mexico during the Peña Nieto administration.

This pattern repeats itself in other Latin American countries, where attacks are increasing and presenting new challenges.

“In the last year, we have seen how the risks of violence which in the past were limited to questions such as drug trafficking are now faced by those who cover issues related to migration and human trafficking, the environment or community defense of lands against the extractive industries,” said González.

Another flashpoint is the coverage of border issues. “Donald Trump’s election as president of the United States has had quite a negative effect in terms of freedom of the press, both domestically and internationally, in the entire region,” he said.