Every day, thousands of refugees are seen in long queues at the relief centres near the camps. 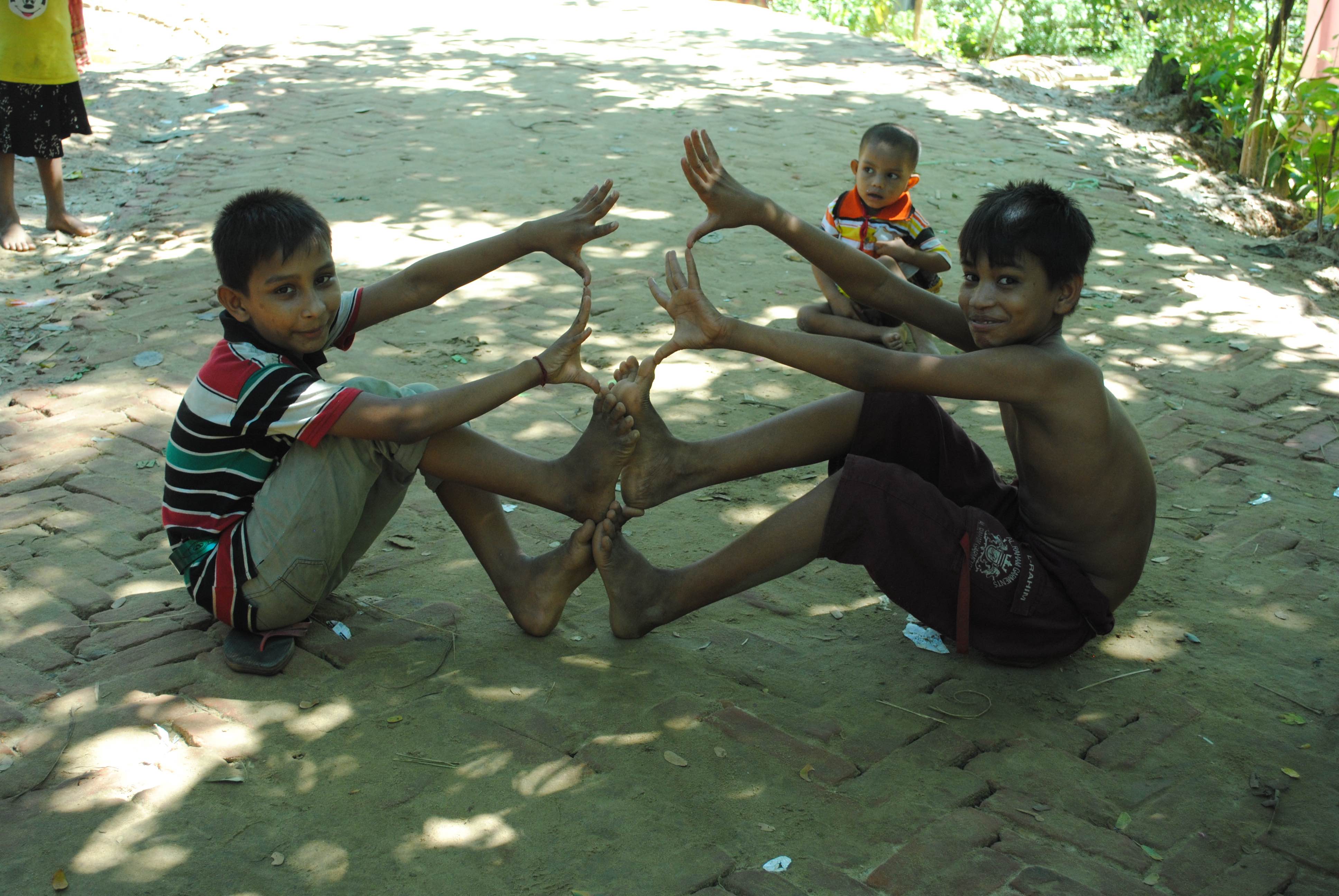 Children playing at a camp of Hindu refugees in Kutupalong.

Thousands of Rohingya Muslims and Hindus from Myanmar, fleeing from their homes in Rakhine state, have been arriving to the coastal district of Cox’s Bazar in Bangladesh since the last two months. The current wave of forced migration from Rakhine is the fourth and undoubtedly, the largest. While the Hindus have taken shelter at Kutupalong, the Muslim refugees have been lodged at several camps in Ukhia and Teknaf. My images are from the camps at Kutupalong, Balukhali and Nayapara.

According to estimates, 600-1000 Hindus have arrived from Rakhine. Women and children have been lodged together at temporary shelters, as huts are being built for every family. 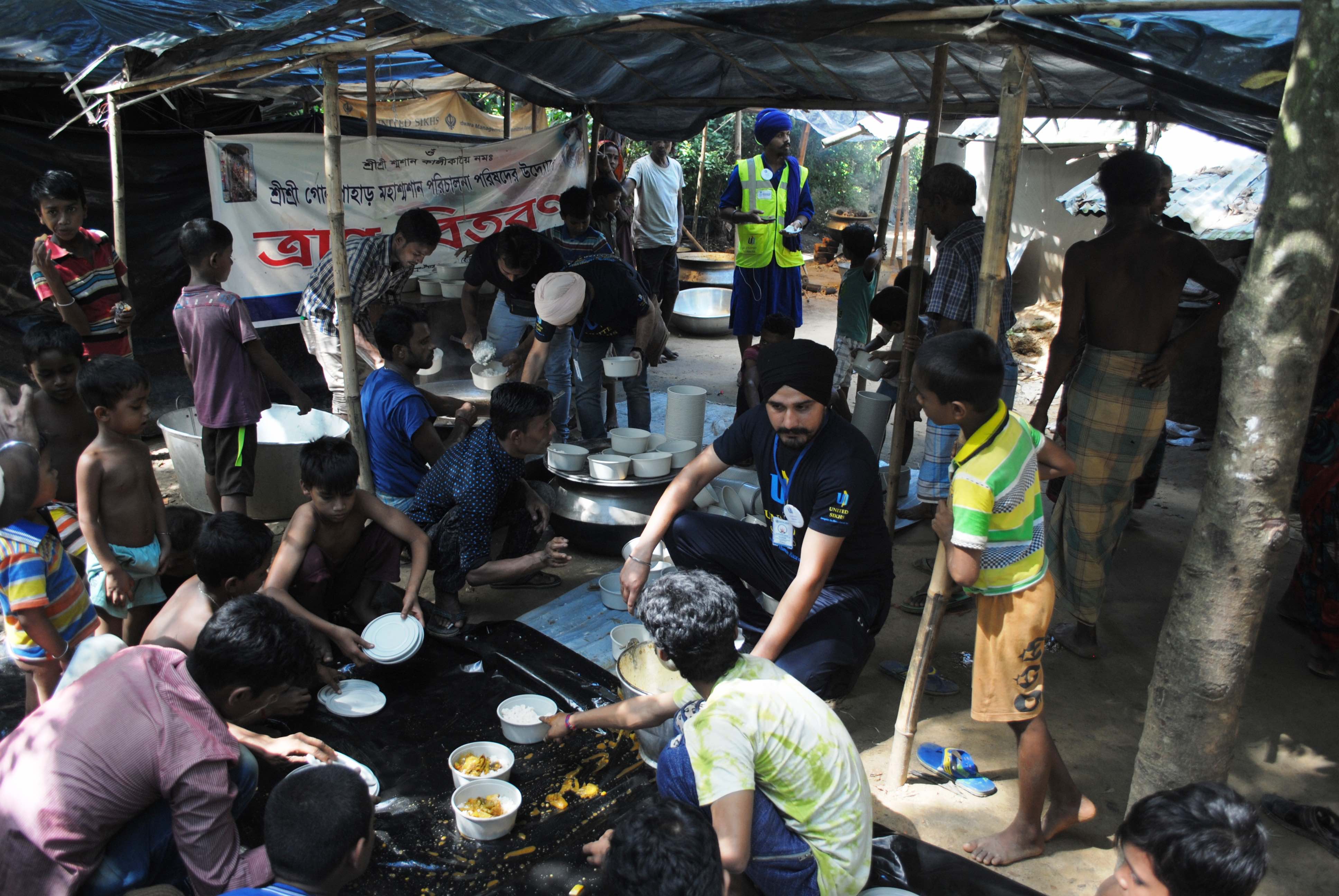 United Sikhs has been providing emergency relief supplies such as plastic sheets, water and food to the Rohingyas and Hindus ever since the crisis erupted. The organisation receives funds from institutions and individuals across the world. Their largest establishment for providing relief to the Rohingya is at Bandarban in Bangladesh. Another voluntary organisation offering relief to the Hindus is Al Furqan, with most of its functionaries arriving from India. 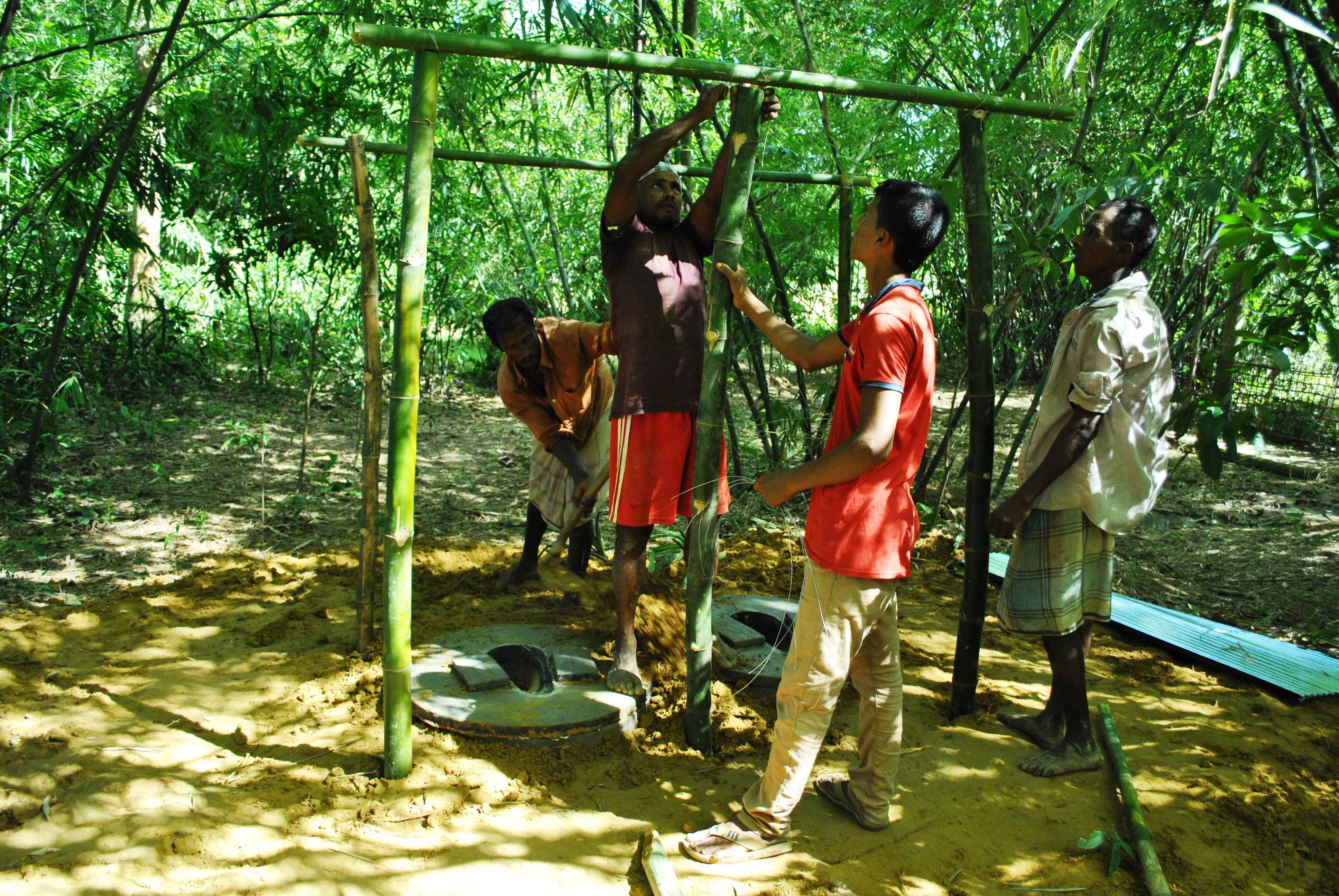 A hut of bamboo and tarpaulin being erected for a Hindu family in Kutupalong.

Plans are underway to provide a hut for every family at the earliest. Besides the relief material provided by the government and voluntary organisations, local Buddhist residents have also pitched in to assist the refugees by providing bamboo and other items for building the huts.

A muddied and swampy pathway through paddy fields leads to a sprawling settlement of thousands of huts where many refugees have been sheltered. Unlike most other camps, the camp in Balukhali is spacious and  plans to erect more huts for accommodating more refugees from Rakhine are underway. 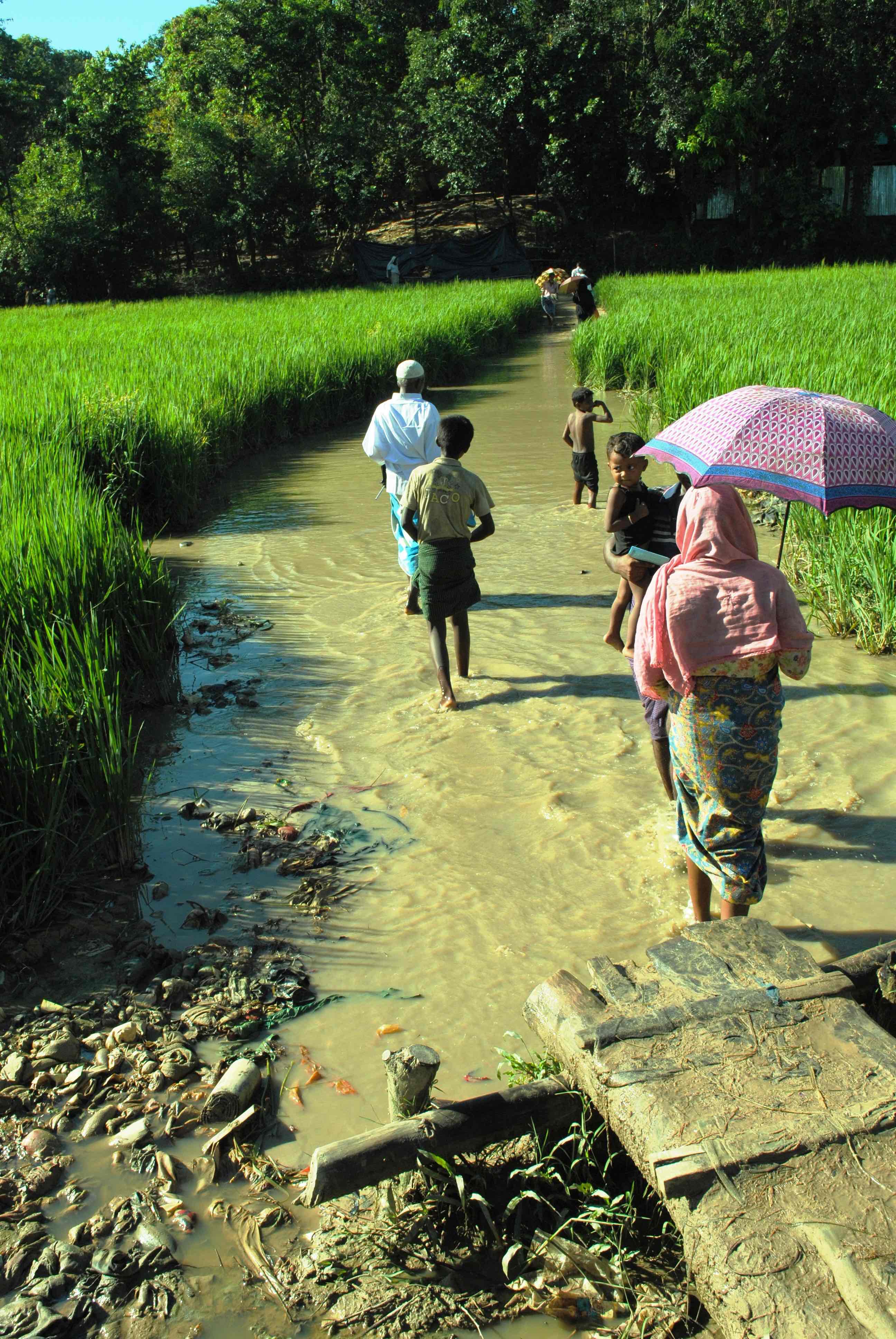 The entrance to a camp at Balukhali where thousands of Muslim refugees have settled. 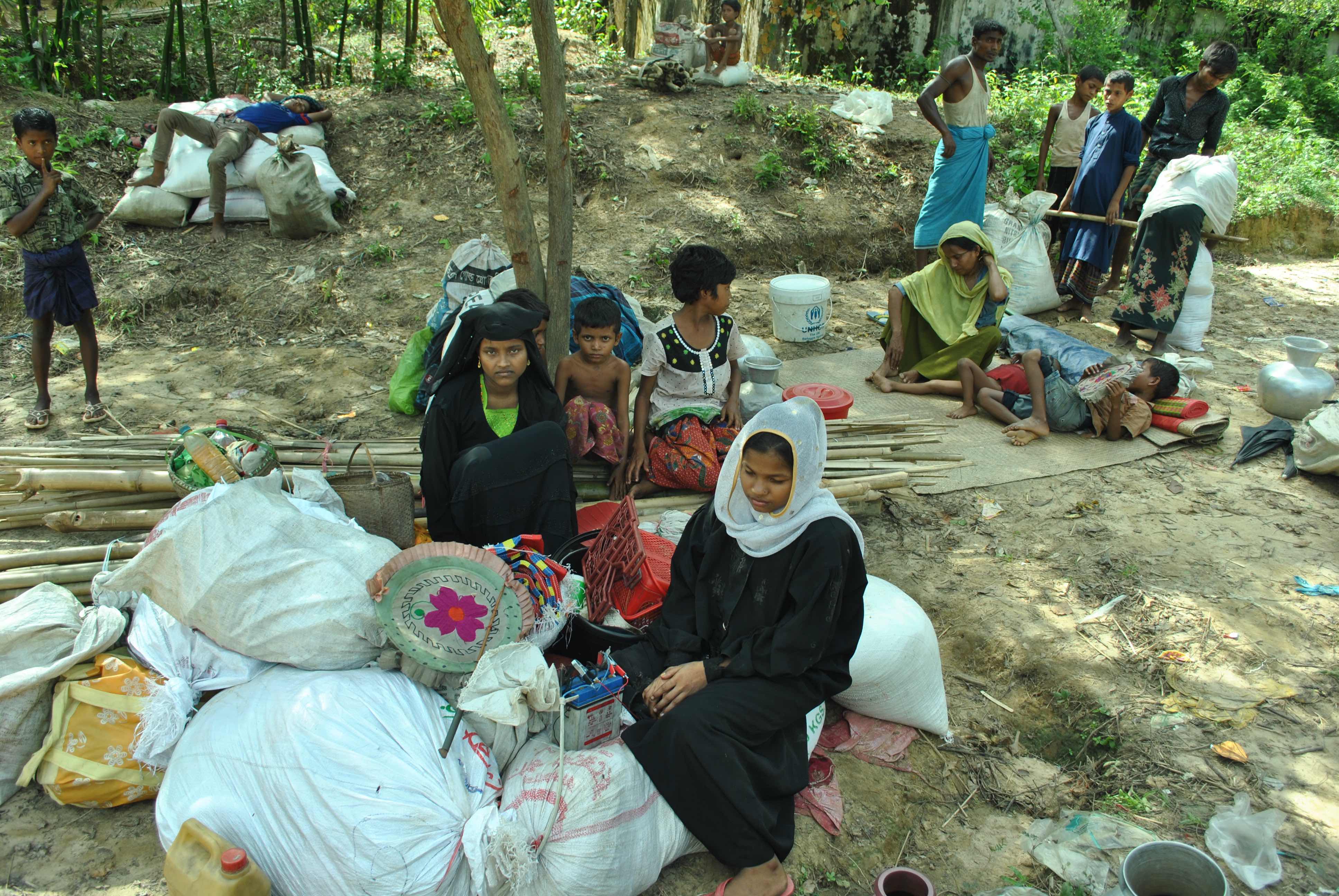 Refugees wait for accommodation at a camp in Kutupalong.

Many people have been arriving by boat from Rakhine at Shah Porir Dip on the Naf river in Teknaf.    While some groups are brought to the camps by vehicles, others walk all the way to these settlements.    Many groups of women and children were seen along the roadside jungle on the banks of the Naf river ahead of the Nayapara camp. 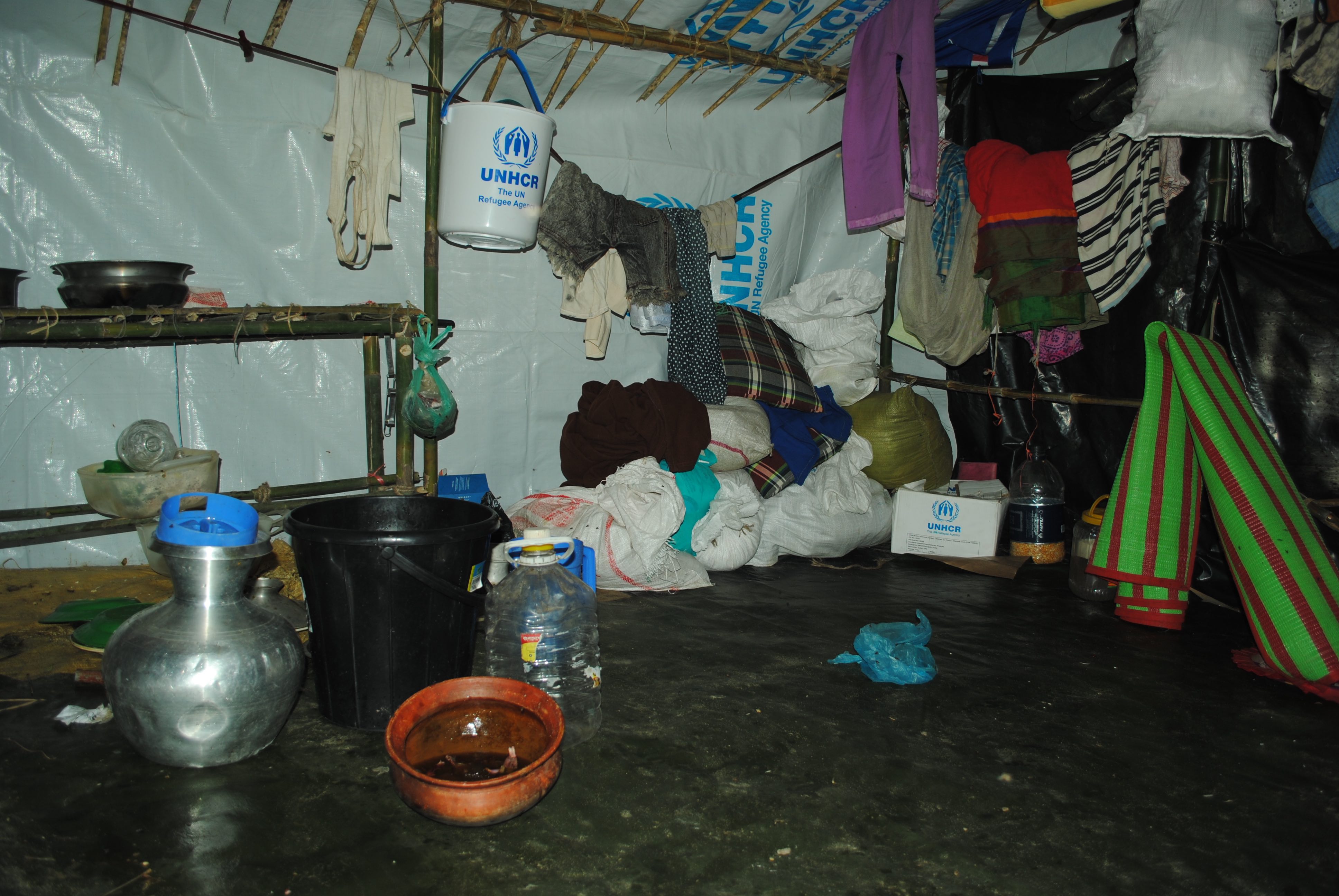 Inside a hut at a camp in Balukhali.

Huts at the settlement in Balukhali were relatively bigger than those in Kutupalong and Nayapara. 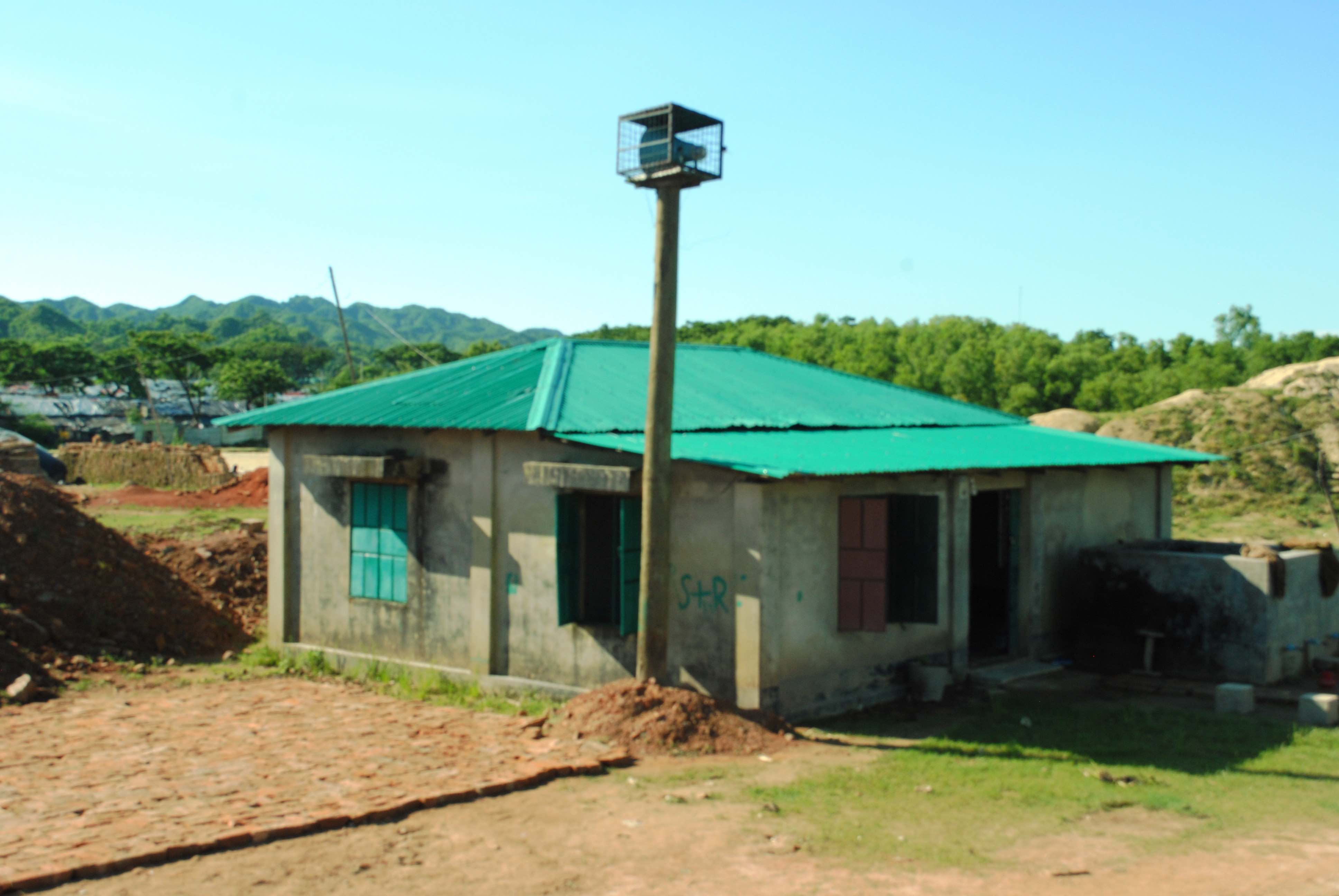 A mosque at the Nayapara Camp.

Hundreds gather for prayers at the mosques in the camp. Clerics command a great deal of influence and support among the populace, and their diktats are hardly disobeyed. Sometimes, they also step in to resolve disputes among the people.

Shops selling a wide range of items including cellular phones and grocery have emerged at the Nayapara camp. However, the shopkeepers complained that business is “below expectation” since many people here are poor. The people at this camp have established sources of income besides the monthly stipend and relief offered by the government and humanitarian agencies. Children watching a Bollywood movie at the Nayapara camp.

Watching Bollywood movies is a favourite pastime among many, especially the children. People gather in large numbers to watch movies at the few shops that have installed television sets. 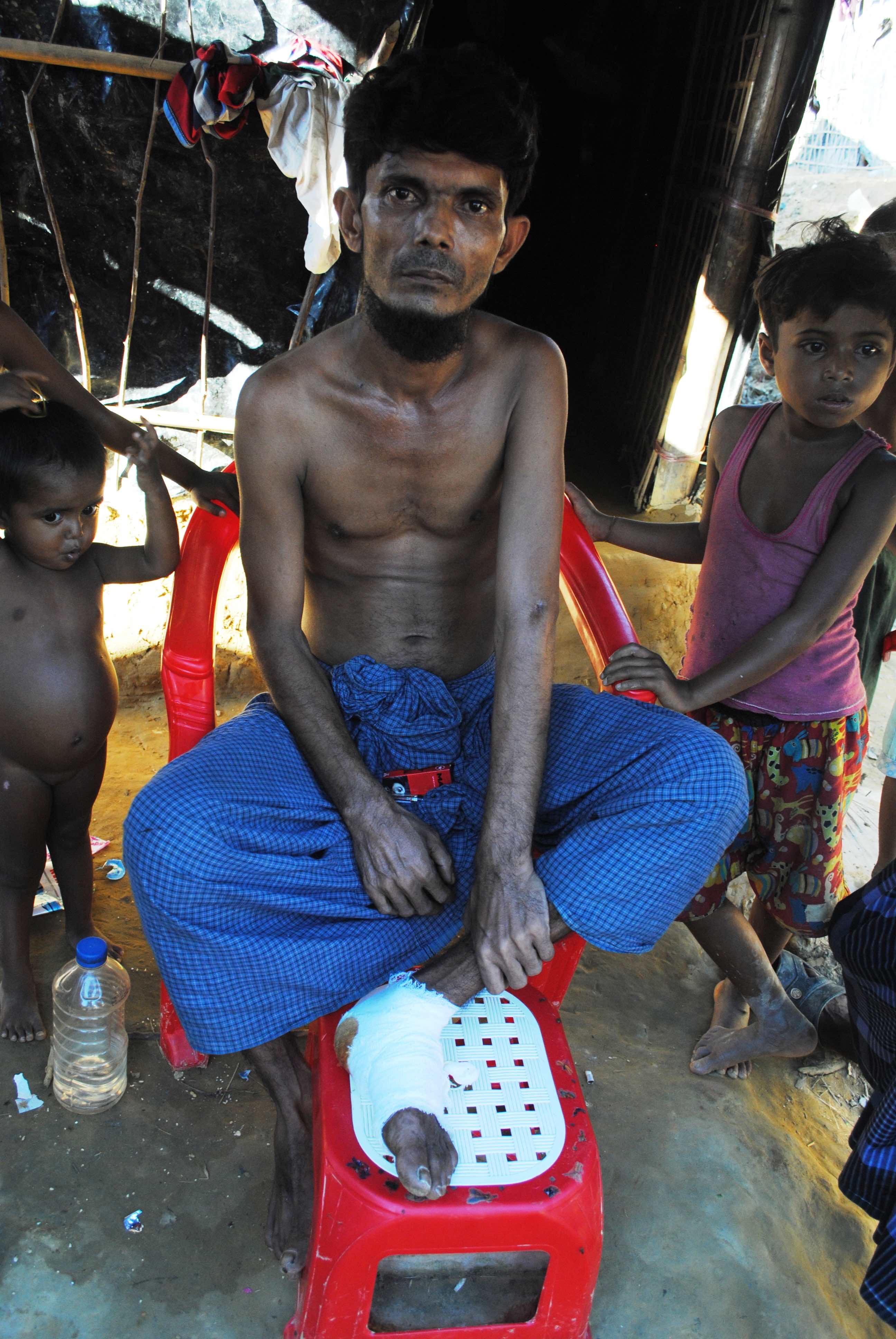 A man in Balukhali camp who was shot twice in Rakhine. The wound on his arm had healed but he complained of severe pain on the ankle which seemed to be getting worse every day.

Every day, thousands of refugees are seen in long queues at the relief centres established near the camps. Sometimes, the daily ration distributed by the government and the humanitarian agencies (like World Food Programme) gets exhausted and the inmates have to wait for hours for the next stock to arrive. On certain occasions, snatching of relief items has also been reported at some locations. 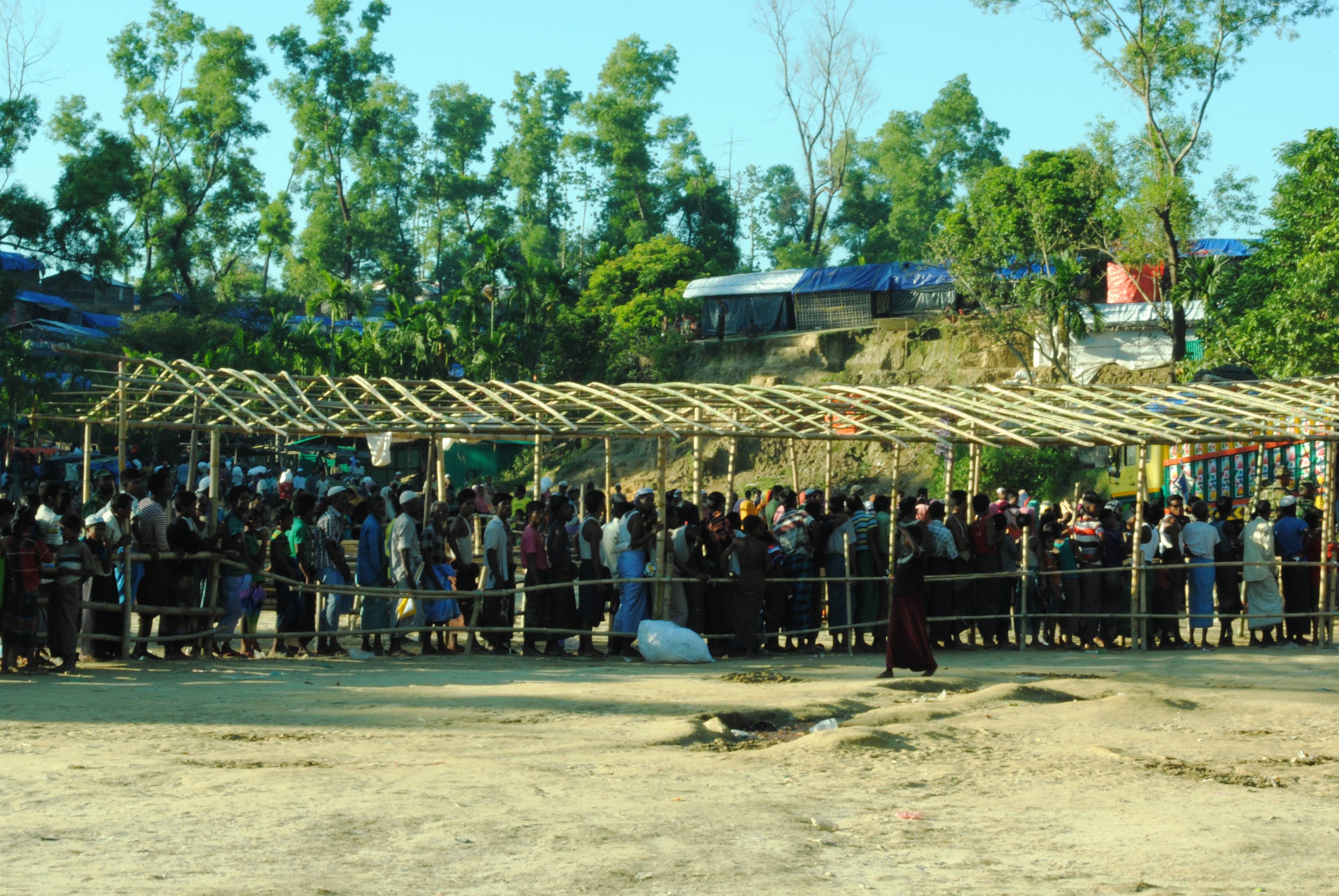 Refugees waiting for relief near a camp at Kutupalong. 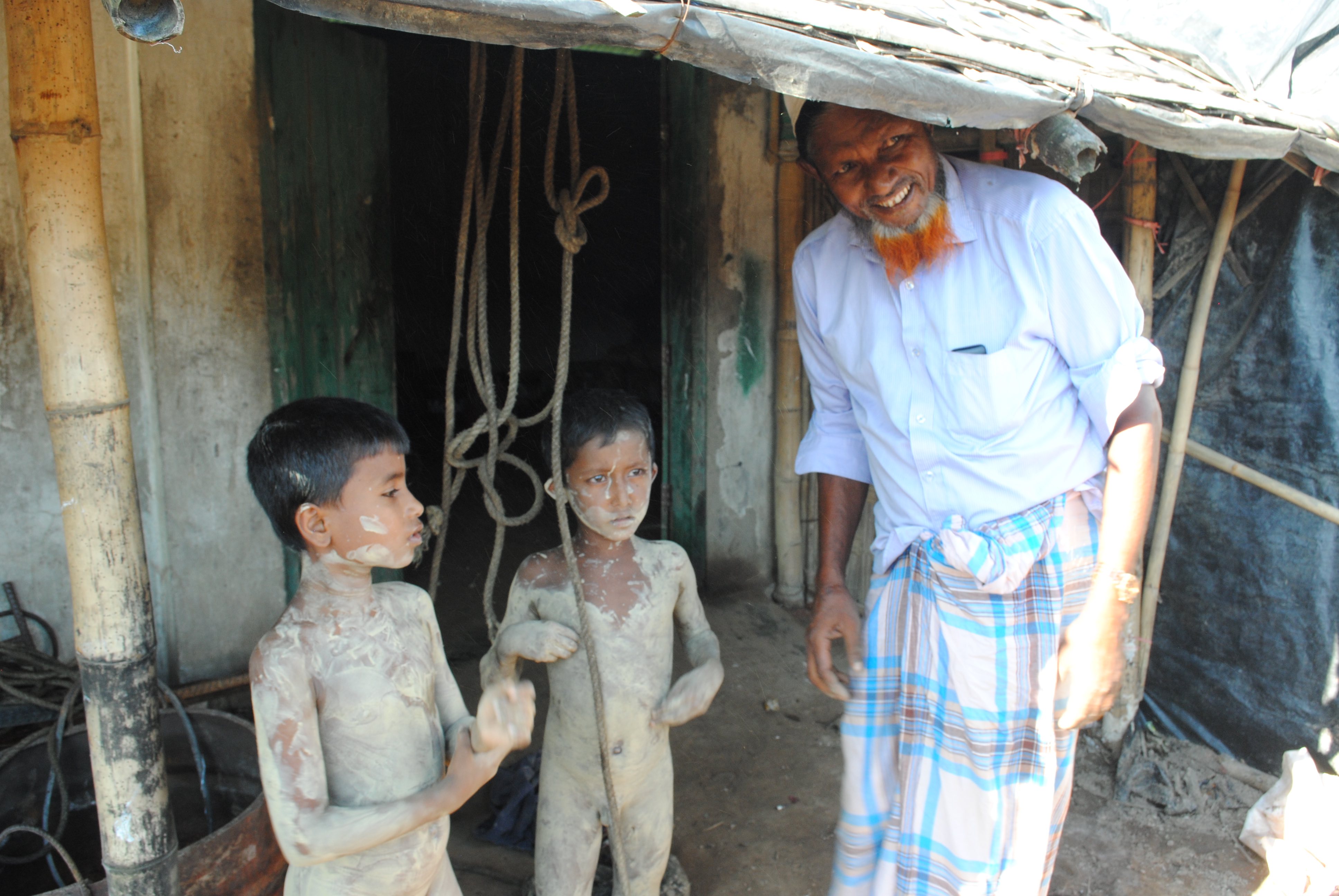 The two children were tied with ropes for two hours after being caught sliding down a small mound into a pit of dirty water at the Nayapara camp. Last year, two children drowned after they plunged deep into the ditch.

All photos by Rajeev Bhattacharyya