“I have said it before and I will say it again. It is not in Pakistan's interest to have our territory used for terrorist attacks outside our country.” Islamabad: Pakistan will wait for the 2019 general elections in India to be over for its current outreach to get a positive response from New Delhi, Prime Minster Imran Khan said on Thursday.

On the 100th day of his term as prime minister, Khan met Indian reporters and took questions ranging from the lack of action on Lashkar chief Hafiz Saeed and 26/11, to Kashmir and India’s response to his diplomatic outreach through the Kartarpur corridor project.

Khan had written a letter to Prime Minister Narendra Modi in September suggesting that the foreign ministers of India and Pakistan meet on the sidelines of the United Nations General Assembly. India cancelled the meeting within a day of approving the plan. The cancellation had been accompanied by a strong statement from India, which was followed by a trenchant response from Pakistan.

“I had such a bad response…it really surprised me,” Khan admitted. “Why would anyone be scared of dialogue? Then there are pre-conditions put on such dialogues…. It is almost as if there is no intention for peace”.

He, however, denied that his tweet at the time “small men occupying big offices who do not have the vision to see the larger picture” was a reference to the Indian prime minister. “It was a general tweet”. 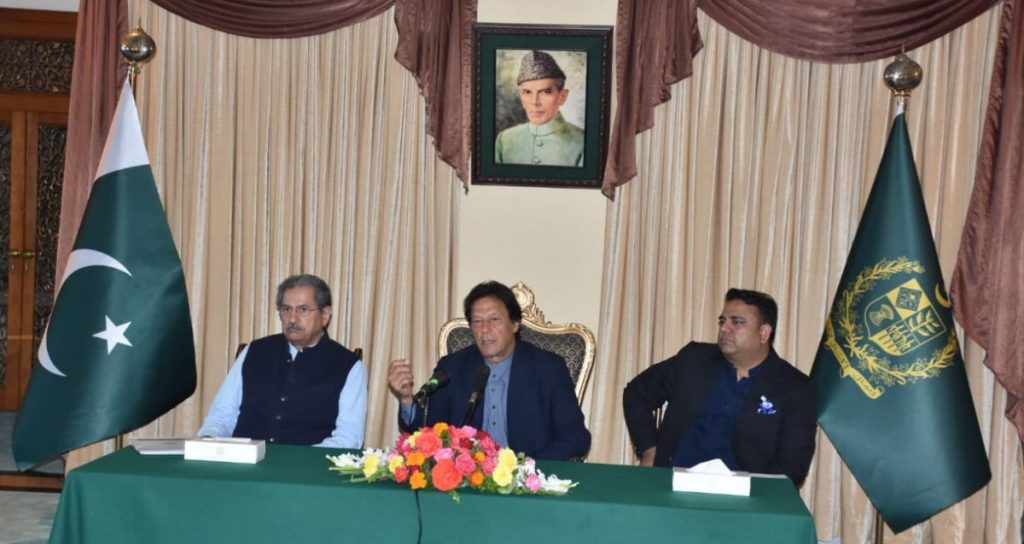 Khan said he would “happily speak” again with the Indian prime minister. “We had a very good conversation… But the rest is history,” he said.

Earlier this week, Pakistan invited external affairs minister Sushma Swaraj to attend the launch of Kartarpur corridor project at Narowal, which is expected to be completed in 11 months before the 550th birth anniversary of Guru Nanak in 2019.

Swaraj declined, citing personal commitments, but nominated two of her ministerial colleagues. She also stated on Wednesday that the Kartarpur project could not lead to the resumption of bliateral dialogue, reiterating the official Indian formula that terror and talks could not go together.

Khan said he felt India’s lack of response to Pakistan’s outreach seemed to be governed by electoral calculations.

“We have also decided that elections are scheduled in India. There are imperatives for elections. Antagonism to Pakistan is often a vote-catcher… We are waiting for elections in April and then we will take it forward,” said Khan.

To a question on whether Pakistan can take action on Hafiz Saeed and Dawood Ibrahim to bridge the trust gap, he said his government could take steps but these had to be reciprocated.

Also watch: India Could Have an Opportunity to Work With Imran Khan

“We can take grand gestures.. but one-sided efforts will not work,” said the former Pakistan national cricket captain. He noted that any unilateral action without India’s response would be political unviable. “We are a politically elected government… I have to face parliament.”

He suggested that India could make a gesture by “doing something for the people of Kashmir”.

After Imran Khan’s speech at Kartarpur, the Indian ministry of external affairs had taken umbrage at his mention of Kashmir as the sole issue for Pakistan.

When asked for his reaction to the Indian criticism, Khan clarified, “Kashmir ki baat na karo (if we can’t talk about Kashmir), then there are no issues (to discuss). I was saying that in this context.” The “core issue” of Kashmir can be resolved with a decisive government on both sides, he said. “That issue is keeping us from moving ahead. If we move forward, something or the other happens in Kashmir and we are back to square one.”

While India’s response to the Kartarpur corridor project was not enthusiastic, Khan insisted that there was a “big impact” within Pakistan.

“A consensus has developed in Pakistan, don’t please confuse this with desperation for peace. It is just [the] consensus of a people across the board that the only way forward is peace and moving forward,” he added.

To a question on whether India could ‘trust’ Pakistan after terror attacks following previous outreach efforts, Khan said, “I can’t answer for the past… I can say that when we do agreements, then we will talk if things break down.”

Khan added that he will not say that while “I was with you, but the army is not”.

“All are on the same page,” he asserted.

Since the 10th anniversary of the 26/11 Mumbai terror attacks was marked this week, there were several questions on Pakistan’s attitude towards LeT supremo Hafiz Saeed.

“There are UN sanctions of 1267 (resolution) on Hafiz Saeed. There is already a clampdown, and sanctions are very severe,” he said.

About the 26/11 cases to prosecute the perpetrators, Khan said these were ‘sub judice’. “We have inherited these cases.”

When asked whether Pakistan could reiterate its 2004 statement on not allowing its soil to be used for terror attack against India, he said, “I have said it before and I will say it again. It is not in Pakistan’s interest to have our territory used for terrorist attacks outside our country.”