A story of a sad and gentle man’s resilience against malice, his undying optimism to win back his ancestral land, and with it a war that was lost long ago. 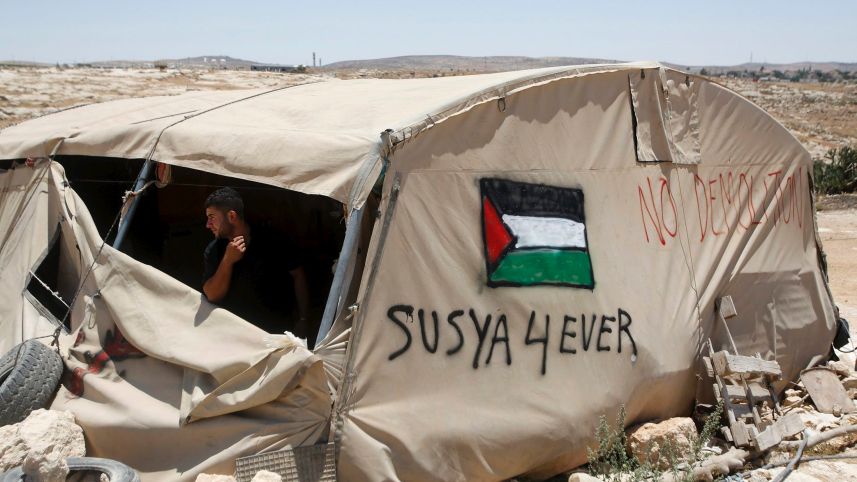 It’s hot in the South Hebron Hills. Hot with desert sunlight, hot with human malice, red-hot greed and searing lies. We leave Jerusalem at 6 am, when the air is still cool. By 7 am we’re at Umm al-Ara’is. We spend the early hours with Na’il and his goats and sheep.

As always, Na’il – a happy man – is upbeat. What does he have except the herd? He’s unmarried and lives with his father. The soldiers are already there and they have marked the boundary beyond which he is forbidden.

We’ve known him for about four years. He greets us with generous words of welcome and I ask him how things are going. “Good,” he says, “a hundred percent.”

How good can they be? I guess it depends on what you need for a good life – the sun, wind, water, thorns and thistles for the goats, a little rough bread and cheese for you and friends. That should suffice. I tell him I’ll come visit him at home next time and maybe some day I’ll stay awhile in the tents at Simri and live life like the way Marcus Aurelius says one should: “Stop jumbling yourself up. Make yourself simple.”

I’ve been away for some months. In March the Supreme Court ruled against the Sa’id and the ‘Awad family in their effort to get back the lands in the wadi, in the hills and the other wadi behind the settlement of Mitzpe Yair, the lands stolen by settlers with active help from the state.

More precisely, the Supreme Court ruled that it was not going to interfere with the professional judgment of the civil administration and its expert bureaucrats who said that the court knew what they were doing down there.

What this means, in effect, is that the fate of the ‘Awad lands is now in the hands of the same army bureaucrats who let the settlers take whatever they wanted to in the first place.

Along with that, the three-year Turkish land law that is still in force in occupied Palestine will operate. According to the rule, a field that is not farmed for three consecutive years “reverts” to the state.

So what about the fields that the owners cannot access because the settlers have stolen them? After three years, they too become state property. First, you let the settlers take them, then you hold the rightful owners at gunpoint and then you tell the owners that because they haven’t farmed these lands for three years, they can no longer claim them. As you can see it’s a useful law if you happen to be a thief.

For some time it looked like things were going well for Sa’id. They were able to plow, sow and harvest a small patch of fertile land in the wadi – maybe 20 dunams – that by no means is a small achievement. They also got access to a piece of the other wadi.

I thought there was a good chance that they would get back most of what they had lost. Now, however, no one can say. Even to farm those 20 dunams they have to coordinate with the army, thus implicitly recognising its authority over them.

Sa’id, however, remains optimistic, gentle and humane. He’s one of the finest men that I have known. We have a long talk while walking the length of the wadi and this is what he says:

“We won’t despair, we cannot despair and we won’t give up. The settlers came 16 years ago. Maybe it will take 16 more years to get back the land. In the end we’ll get it. I inherited the land from my father, who got it from my grandfather, who had from his father and his father’s father and so on stretching back for generations. If I don’t live to reclaim it – I’m 45 years old – my sons or grandsons will win it back by peaceful means. I’m interested only in one thing, in regaining my land. I won’t let anything else distract me and I don’t care about the politics. In the end, what is right and just will win.

“Arabs and Jews can live together here without problems. We speak to one another, we drink coffee together, and we can get along. But the Occupation must end, and it will end. What the Occupation does is wrong, utterly unjust. Politicians on both sides incite their people and foster hate. When the Occupation goes, we will have peace. You can’t predict when it will happen, but we know it will. Good people on both sides will come together. When the officer from the civil administration first came here, she had the hardest heart we’d ever seen. She set up a long red ribbon the length of our fields and said, ‘Beyond this point you cannot move.’ She threatened us. But she’s changed. We work with her. I can talk with her. She called me on the festival day to wish me well. Peace will come, it has to come and it will be a feast for all of us. The soldiers don’t need to come here with their guns. They should put them away. What are they good for anyway?”

Some of the kids have borrowed Qianyi’s green umbrella, which offers some relief from the mid-morning sun. They play with it – a miraculous new toy. They open it and close it over and over. They wave it above their heads and they huddle under it. We watch them bobbing up and down the hill like Mary Poppins, all the way through the rocks and thorns to Simri and back.

Sa’id’s wife lights a fire and prepares tea. White sunlight burns into our skin as the soldiers stroll past. No confrontations today. Sa’id says with unassuming, un-innocent irony that it almost feels like what peace will feel like some day.

But at Susya, which is just down the road, things are looking bad. On Monday morning the Supreme Court will consider the Susya case again. We have asked them for a stay order on the house demolitions that the army has been threatening to carry out since last year, and the year before that, and so on back into the depths of time. There’s no chance the court will issue the order.

The court has also been asked to rule on why the master plan for development that the Susya Palestinians prepared was rejected (as if we didn’t know why; the committee that sits in judgment on such plans is run by settlers).

It’s unlikely the court will have anything new to say on this critical question. The judges will let things take their desolate course. You have to remember that there are demolition orders on nearly all the standing structures of the village. You have to remember that behind all this is the naked attempt to liquidate Susya and get rid of its inhabitants. So will the army send in the bulldozers on Monday afternoon or on Tuesday morning? Maybe. Only international pressure can stop them like it did a year ago.

While we are sitting in Susya, news comes in from the Jordan Valley. The security officer of the Rotem settlement took out his pistol and without a warning shot a Palestinian family’s cow in the leg in the presence of its owner. Guy and Amir rush off to the site that is a two-hour drive away to take the owner of the cow to the police station to file a complaint. The cow survived.

As I said, it’s hot today. Maybe the security officer, too, was feeling hot. The malice inside him reached its boiling point and the cow paid the price.

On a day like today I ask myself if wickedness, greed, bloodlust and mendacity are ingrained in us as a species and are naturally selected by evolution to enable us to survive. If so, then what are we doing trying to oppose these inner forces as we struggle for momentary rear-guard victories in a war that was lost long ago?

But then again, there’s Sa’id.