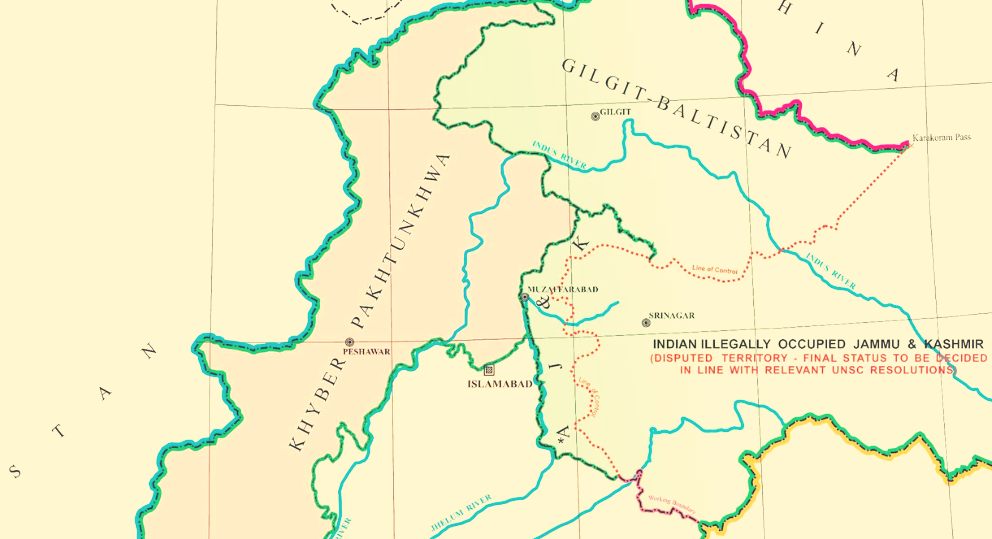 A portion of the new Pakistan political map, which shows the Indian Union Territories of Jammu and Kashmir and Ladakh as part of Pakistan. Photo: Dawn

New Delhi: On the eve of the first anniversary of the revocation of Kashmir’s constitutional autonomy by India, the Pakistan government claimed to have unveiled a ‘new political map’, an act which India has called an “exercise in political absurdity”. While Islamabad claimed that the inclusion of the Indian Union Territories of Jammu and Kashmir and Ladakh was a new move, comparisons with previous versions do not mark any major changes.

As reported by Pakistani media, Prime Minister Imran Khan unveiled the map after it was approved by the cabinet.

The map shows a part of Jammu and Kashmir and Ladakh, with the lines emblazoned on it stating, “Indian illegally occupied Jammu and Kashmir”. Just below it, the text in parentheses reads, “Disputed Territory – Final Status will be decided in line with the relevant UNSC resolutions”. Junagadh in Gujarat is also shown as part of Pakistan. Junagadh was a Hindu majority princely state whose Muslim ruler opted to join Pakistan in 1947 but whose Hindu subjects said they wanted to join India.

Pakistani foreign minister S.M. Qureshi claimed that this was the first time that “a map reflected the aspirations of the people”.

Asserting that this was a “historical day,” Qureshi stated, “Our destination is Srinagar”.

Dawn reported Qureshi as having said that the changes in the map  “clearly showed occupied Kashmir as a disputed territory and the only solution to the issue would be through the UNSC resolutions and as per the aspirations of the people”.

Qureshi also stated that map included the Siachen glacier, which is under Indian control. “ [Through the map] we are challenging their illegal occupation and claiming our right to the area,” he said.

Within a few hours, India’s Ministry of External Affairs said that it had noted the “so-called “political map” of Pakistan that has been released by Prime Minister Imran Khan”.

“This is an exercise in political absurdity, laying untenable claims to territories in the Indian State of Gujarat and our Union Territories of Jammu & Kashmir and of Ladakh,” said the statement.

Stating that these “ridiculous assertions” have neither legal validity nor international credibility, the MEA press note added, “In fact, this new effort only confirms reality of Pakistan’s obsession with territorial aggrandisement supported by cross-border terrorism”.

Pakistan government’s latest move mirrors the step taken by Nepal cabinet to introduce a new political map which incorporated territories claimed by India. The Nepal parliament had subsequently changed the country’s constitution to update the contours of the map in the national coat of arms.

However, in the case of Pakistan, it does not seem that there has been any change in the territorial outlines of the map, compared to the previous official version.

The Survey of Pakistan’s webpage does not have a copy of the official map right now. But, the archived snapshot of the website dated April 10 showed that the website did have a separate section described as “Pakistan maps”, which has since been removed.

This section previously had links to two maps – an “official map” and another map “with border lengths”.

The archived link to the second map, which was a 2017 edition, allowed for download of an Adobe document which was the official one used till it was replaced on August 4. As a side by side comparison shows, the outline of two Pakistan maps has not changed at all, with Ladakh and Junagadh also depicted as part of their claimed territorial lines. 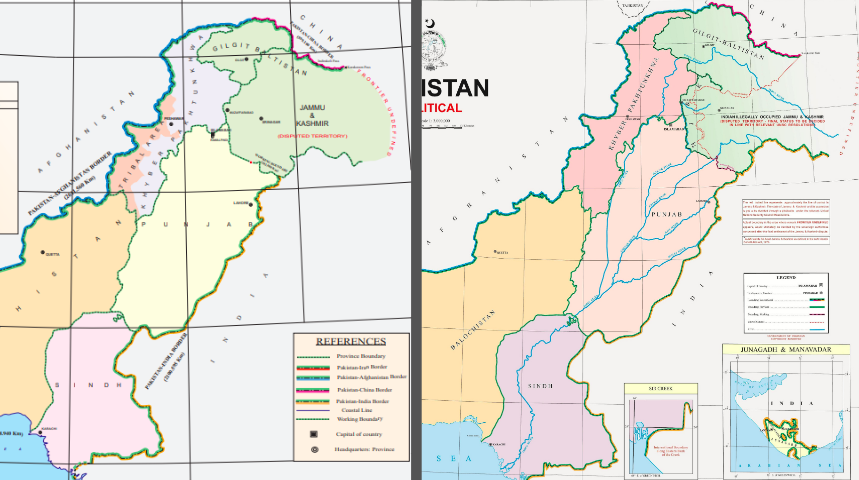 Both the maps also read “frontier undefined” in the top eastern part of the map, adjacent to Ladakh.

The only difference is the amount of text added to Jammu and Kashmir. The earlier one only had “disputed territory” in red. The latest map adds a reference to UNSC resolutions, which has been Pakistan’s official position on Kashmir since 1947.

There are further three text boxes in map which stated that the red dotted line signifies the Line of Control, adding that “accession” of Jammu and Kashmir has yet to be decided by a plebiscite and UNSC resolutions.

Besides, the map also states that the “frontier undefined” portion will be defined by “sovereign authorities concerned after the final settlement of the Jammu and Kashmir dispute”.

However, as this blog post from October 2019 by a doctorate student of University of Nottingham observes, Pakistan has been depicting Kashmir with eastern boundary undefined – and Junagadh in Gujarat – in early maps going back to 1950s.

Indian government sources confirmed that there is no territorial difference in the claims made by Pakistan in the new map, asserting that it was largely a publicity exercise.

Opposition Pakistan Muslim League (Nawaz)’s secretary general and a former minister Ahsan Iqbal also tweeted that Kashmir had always been shown as a part of Pakistan. “If you want to do something, call an Islamic summit,” Iqbal posted.