The Worrying Trend of Violent Crimes Against Children in Pakistan's Kasur

While the rape and murder of a seven year old has brought the public to the streets, the law and order situation has been far from perfect in the past. 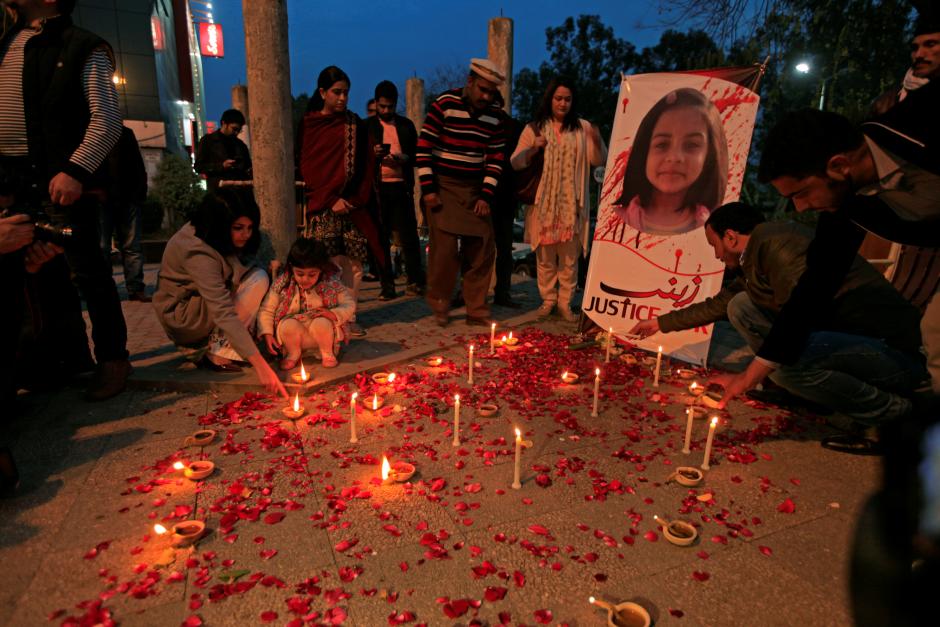 Members of civil society light candles and earthen lamps to condemn the rape and murder of 7-year-old girl Zainab Ansari in Kasur, during a candlelight vigil in Islamabad, Pakistan January 11, 2018. Credit: Reuters/Faisal Mahmood

Lahore: Kasur, the city of sufi saint Bulleh Shah, seems to have developed a notorious reputation over the past few years, especially regarding violent crime.

In the most recent incident, when the raped and mutilated body of seven-year-old Zainab Ansari was found ruthlessly thrown in a garbage dump, it seemed as if the public could not hold it in any longer.

Hit partly by the tragedy of the incident, which unravelled their anger and resentment at the local police, and also because Zainab belonged to the dominant Ansari clan of the city, mob violence broke out and people began pelting stones and breaking car windows. Vehicles were set on fire and things only worsened when the police opened fire on the protestors, killing two.

A history of violence

Kasur has been building up its aura of particularly gruesome crimes since November 2014, when two brick kiln labourers Shama and Shahzad Masih were accused of blasphemy and burnt alive by a mob. Then in 2015, a child pornography ring was exposed where minors of various ages belonging to one specific village were being forced by a gang to pose for porn. The ring was also found to be patronised by a local member of the Punjab assembly belonging the the ruling Pakistan Muslim League (Nawaz). Though the member of provincial assembly was off the hook, the ring leader was nabbed and jailed, and eventually the issue faded away.

But the situation worsened after news of child murders surfaced once again, especially in 2017.

According to Sahil, a child rights organisation, in 2017, a total of 129 cases of child assault were reported from Kasur alone. Of these, 34 were abductions, 23 were rapes and four were abduction and gangrapes. In the last three years, a total of 720 incidents have been reported from Kasur. Zainab’s was the 12th such case that was reported within a two-km radius in the past year.

Mamtaz Gohar, senior programme coordinator at Sahil, says that there was also an increase in the number of murders that have taken place after child sexual assault. For example, in Kasur in 2015 and 2016, four children were found raped and murdered in both years, but in 2017 there were 11 such incidents. “And all these incidents are reported, which means there are so many more incidents either covered up or unreported,” he says. “The 2-3% increase is a worrying trend to see.”

But none of the other districts are exactly safe zones for children either. As the Zainab case shocked the nation, the body of 15-year-old Sajida – raped and murdered – was found in a field in the outskirts of Sargodha. The same week, a molested body of 11-year-old Shariq was also found in Kasur, in a field. In November 2017, ten-year-old Ali Raza had also been sexually assaulted and murdered in a similar way in the same police station’s jurisdiction. According to legal experts, while sexual abuse is common in several parts of the country, it is the criminal justice system which often either lets criminals go scot free, or the police investigation which ends up with a weak prosecution.

“The overall conviction rate in Pakistan is less than 10% when it comes to crimes,” says lawyer Ahmer Majid. “At the same time, we have no studies to determine whether it [the rising crime rate] is actually a rise in crime itself or the reporting of crimes.” He adds that most violent crimes occur in Punjab.

Child rights activist Iftikhar Mubarik, who has been urging the Punjab government to form a special Child Rights Commission which would look after all issues concerning the rights of children, agrees to these statistics, saying that Punjab’s rural areas have the highest reported crime incidents.

“The more urbanised a city is, the more disconnected the people living in a neighbourhood are with each other. But in a small town or a rural area, they would even know what’s being cooked for dinner in the other house. How can they cover up a crime then?” he asks.

Usually, a victim of child sexual abuse is familiar with the perpetrator, and because of this the matter is covered up and the incident treated as taboo. In cases of this kind, the matter never reaches court and is settled outside. But much of the problem lies with the police and their ineptitude – first during the crime scene investigation and the later during the follow-up investigation. As a result, the medico-legal officer hardly ever receives any forensic evidence to send to the chemical examiners, and therefore the prosecution is weakened. But what is perhaps another worrying trend is the way some prime suspects in child sexual abuse cases have been killed in police encounters. Around four months ago, one alleged rapist-killer was killed in an encounter in Bhalwal, Sargodha, while a second was killed on Wednesday night in Sheikhupura.

“Shahbaz Sharif has always been inclined towards police encounters,” says a lawyer, on the condition of anonymity. “But this new trend is not just raising moral questions – such as how do we even know the man was a proven rapist-killer – but encounters also raise the issue of the police showing its aggression. Are they trying to fool people by showing how quickly they have brought ‘justice’ to the forefront?”

Encounter or not, the public in Kasur lives with a mixture of fear and anger.

“If the police admits to a killer being at large since 2015, and it could not catch him, which was bad enough, why did it make no efforts to at least educate the public about the dangers? Could it not have at least done DNA sampling of the previous bodies?” the lawyer continued.

DNA samples taken from Zainab’s body point out that at she was raped least six times by the same man. The Lahore high court has given the police 36 hours to find the killer and reveal who he is.

“We want a public hanging to make an example of this man,” says one man.

“Today they will hang a rapist, tomorrow it could be anyone. There are laws out there and a legal procedure must be followed,” says Majid, who works on child abuse cases.

In the mean time, the presence of Rangers means the protests have been forcibly quelled. On the third day, a small rally started in the morning but backed off quickly seeing the Rangers’ vehicles.

“It’s not as if such a case has taken place for the first time,” says Mubarik. “But its intensity followed by the protests have jolted the nation, and now we are looking more consciously at the problem of child abuse.”

The chief minister of Punjab has promised many things in the aftermath of the murder, but many see these as only knee-jerk responses. “If we tackled the issue on a permanent basis, it would be automatic prevention of something else happening,” adds Mubarik. “But this is the way our government always reacts.”

But Dr Ali Madeeh Hashmi, a prominent psychiatrist in Lahore, sees a darker future. He questions why the girl was allowed to leave in the first place (Zainab had reportedly gone to attend Quran classes in the neighbourhood, after which when she was allegedly abducted. CCTV footage shows the girl walking with a stranger and holding his hand).

“These issues are intertwined with poverty and lack of education as well as placing too much trust in the people around them,” he says, adding that there seems to be “serious laxity of law”, too. “Everyone can’t just approach a child there (Quran classes) because serious checking is done.”

What Pakistan does need, Hashmi says, is a radical reorganisation of society along progressive lines – but that is a long-term plan. In the short term it’s a law and order situation, and with Kasur being a border town, it is extra sensitive so police must also be well trained, he says.

Hashmi adds that the ‘mentally ill’ and those who indulge in criminal acts are two different things and this differentiation is important. “All we know about the rapist-killer is speculation, but let me tell you, it is the so-called mentally fit people who commit more such crimes than the mentally ill. Labelling every offender mentally ill is further stigmatising those who suffer from real mental health issues.”

Xari Jalil is veteran journalist who reports from Karachi and Lahore. Her areas of interest include crime, society and art. She tweets at @xarijalil