The October Revolution Is Now a Historical Footnote in Russia

Most Russians are simply indifferent to the 1917 revolution as a topic of interest and as a political event worthy of commemoration. 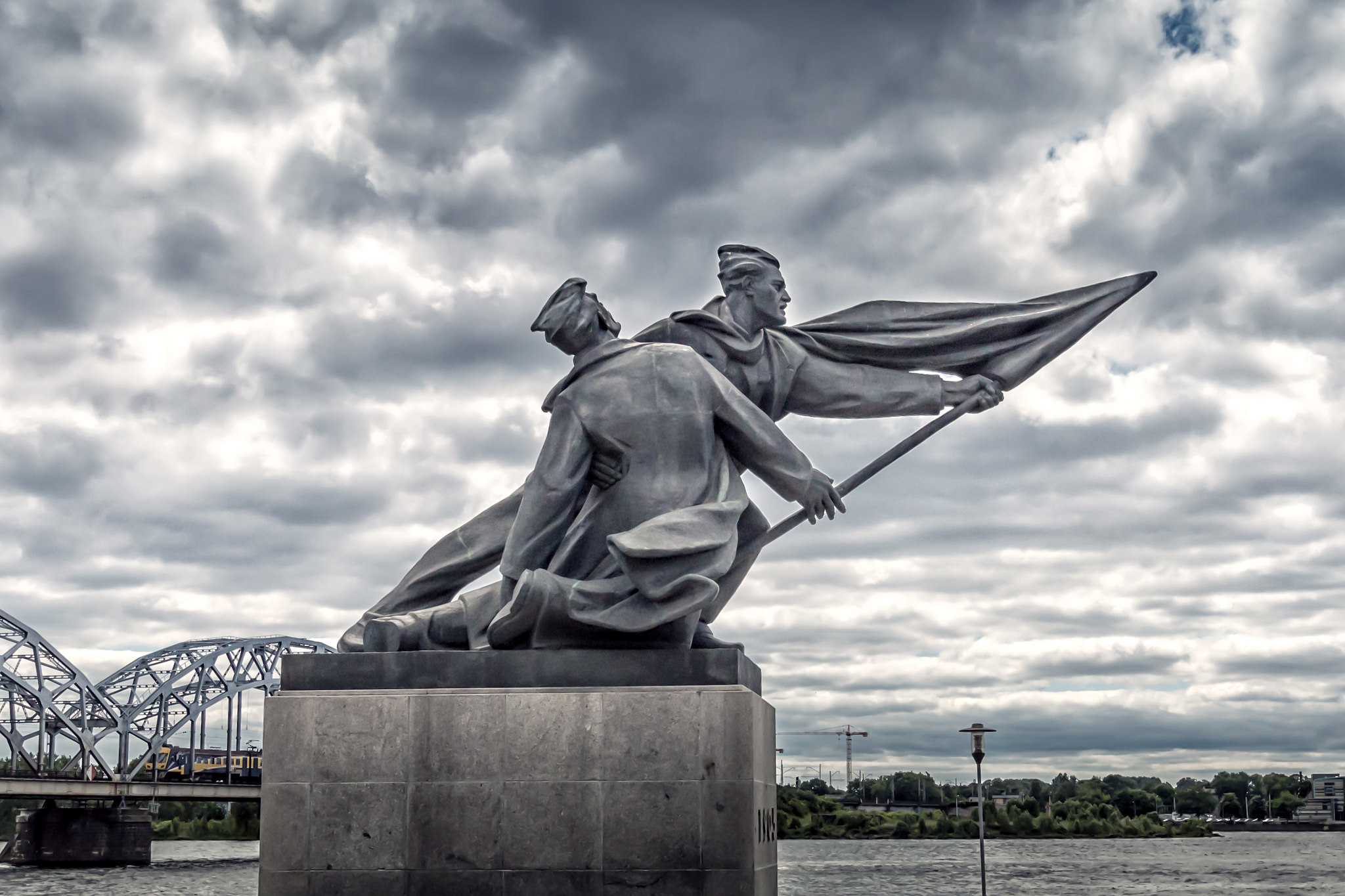 Monument of the to mark the Russian Revolution in 1905 at the Daugava in Riga, Latvia. Credit: Jutta M. Jenning/Flickr CC BY-NC-ND 2.0

In Russia, there will be no official commemoration of the centenary of the most significant political event of the 20th century – the October Revolution (October 25 in the Julian calendar and November 7 in the Gregorian calendar). An official centennial celebration would imply and require a consensual understanding of the significance of the event. Such a consensus remains elusive, however, as the history and collective memory of the communist past remain highly contested. An official commemoration could be read as an endorsement of the event and would be at odds with the very complex and ambivalent relationship that Russians have with respect to the events of October 1917.

The political holiday of November 7 was abolished in 1996 and there has been no official commemoration of the revolution since. Russians had ostensibly closed that chapter of history and needed no reminders of it. However, given the current regime’s proclivity for cherry-picking episodes of Soviet political history to underpin national identity, speculation was rife about whether the centenary year would be different. Would Russia under Vladimir Putin decide to acknowledge the historical significance of the revolution in its 100th year? In an announcement last year, Putin declared that there would be a year-long series of events in which academics would discuss and debate the revolution. It was to be a scholarly preoccupation but the state would not officially mark the centenary. Various announcements by ministers in the government have suggested that a state-organised commemoration of this disputed event would deepen existing divisions in society. The chasm between those who saw it as benefitting Russia and those who saw it as an aberration that ruined their inevitable course towards Western-style modernity would only grow if there was to be official fanfare around the event.

The social and political divisions that Putin refers to stem from long enduring battles about how to read the meaning of the revolution and how to assess its impact on Russian and then Soviet society. In Russia, which became the Soviet Union in 1922, the story of the October Revolution was the foundation tale that legitimised 70-odd years of communist rule. The process of becoming a foundation tale, though, was long and convoluted. Like all foundation myths and narratives, it involved years of debates and discussion within the Soviet state about how to interpret and frame the October Revolution. 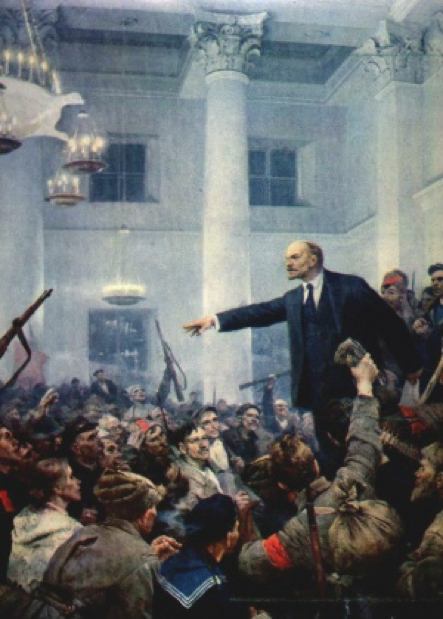 In the initial post-revolutionary years, the new state found that people’s participation in the commemoration of the revolution left a lot to be desired; workers complained that celebrations were long-winded and many simply stayed away to indulge in a bout of drinking. Realising that the revolution could only be consolidated in this vast country through a constant narration and reiteration of why it had been so essential, the Bolsheviks set about working on their ‘story’. In order to create a memory archive of the revolution and in order to write its own history, the early Bolshevik state set up Istpart, a committee for documenting the history of the revolution, in 1920. Istpart had as its task the collecting of eyewitness accounts of the way the events unfolded, what people remembered and their own role in it. Such a documentation of witness accounts could have made for a wonderfully rich and plural account of 1917. Instead, these wide ranging personal narratives of the October Revolution were written down, edited by the Istpart members and fed into a grand, centralising narrative that would ensure no inner contradictions in the tale of the revolution. Istpart’s work was only part of a large project to document and narrate the revolution. The output was tremendous; called ‘histories of the revolution’, they were mostly in the genre of pamphlets and memoirs but vital to the crystallisation of the foundation tale. Writing in the Journal of Modern History in 1930, Michael Karpovich wrote of 6,296 titles dedicated to Vladimir Lenin and the revolution in the year 1925 alone.

The centralising narrative the Bolsheviks eventually arrived upon, first under Stalin and then revised under Nikita Khrushchev, promoted the legend of the single Bolshevik party united under Lenin leading the charge in October 1917. In this myth, the February Revolution is a secondary event, simply a prelude to the more significant development in October. A Bolshevik and Lenin-centric myth also had no place for other political parties like the Mensheviks and Socialist Revolutionaries and their role in the politics of the time. Members of these parties, after all, also found themselves languishing as the earliest political prisoners of the Soviet state. 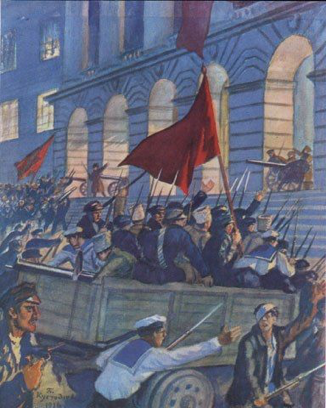 A painting depicting “The storming of the winter palace” . Credit: Wikimedia Commons

However, all foundation tales, while embodying the intent to create uniform allegiance to a state and nation, must grapple with popular strategies of resistance or alternative scenarios that cast doubt on the official narrative. The Soviet Union was no exception. The narrative of the revolution as Bolshevik-centric, Lenin-centric and Petrograd-centric was complemented (or challenged) by many new historical accounts, particularly after the death of Stalin in 1953. Some Soviet historians looked at the active participation of workers outside the capitals, which was also at odds with the more capital-centred account of the foundational tale. Others considered the role of non-proletarian political parties to see the revolution as a broad-based, popular phenomenon. Historian Khanan Astrakhan, like his American counterpart Alexander Rabinowitch (my supervisor and mentor), wrote of the multiple political views within the Bolshevik fold. New perspectives like these disrupted the myth of the Bolsheviks as a homogeneous group where dissent was disallowed and political views were unanimous. These histories are an important reminder of the challenges to the official historical account as early as the 1960s, well before the revisionist works of the perestroika years. They rendered the story of the revolution in more complex narratives that eschewed the simplicity of the prescribed histories of the event.

Since the fall of the revolution, the Russian state has reclaimed select historical episodes to suit the politics of the moment; it is unclear where the revolution fits in this repertoire of histories. Boris Kolonitskii writes that in 2008, during a congress at the Russian State University of the Humanities, government representatives spoke of the damage and destruction that the revolution wrought.The foundation tale of the October Revolution did not serve its purpose anymore for a post-Soviet state with imperial pretensions. Yet, Putin said more recently as he oversaw proceedings about drafting a new history textbook for schools in 2014, that the revolution (no matter how we perceived it) was undoubtedly an event students must study and understand. The new historical narrative, according to scholars like Joseph Zajda, is one that portrays the revolution in less dramatic terms than the Soviet foundation tale. The storming of the winter palace, a common expression used to describe the Bolshevik takeover, is instead the quiet, bloodless coup of a small group of revolutionaries, while the army stood by dispirited and disengaged.

Recent academic conferences in Russia on 1917 reveal a productive academic scene despite official ambivalence. Rabinowitch communicated in a private email that leading historians in Russia today are not in the business of myth-making. “Many are conducting valuable, archival based research on important, understudied aspects of the revolutionary era. Increasingly, they view the February and October Revolutions as key stages in a complex multi-year political, economic, and social process that they now frequently refer to as The Great Russian Revolution.” Such a shift in framing implies multiple actors and recasts the revolution as ‘process’ rather than singular event. It brings with it the promise of new histories of the revolution, characterised by a diverse set of protagonists and told in original ways. 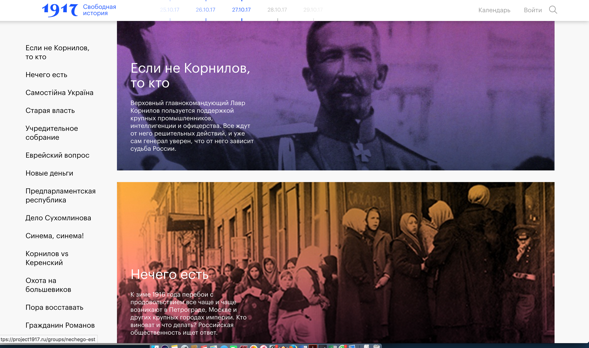 But this academic engagement is hardly matched by widespread public interest in the subject. Russia, mostly, is witness to conspiracy theories about the event, not very different from those that circulated right after the revolution. In these popular theories, the February and October revolutions were the handiwork of German and British agents. Mikhail Zygar, editor-in-chief of Dozhd’ (Russia’s independent news station), calls the revolution the most important and the most forgotten event of Russian history in a recent article in The Calvert Journal. To familiarise young people with Russia’s history, Zygar has started ‘Project 1917’ – a digital initiative managed by a network of young historians and other young professionals. These volunteers have been gathering primary sources in order to revisit the revolution and tell its tale in a popular and accessible manner on a digital platform.

Such instances notwithstanding, most Russians are simply indifferent  to the 1917 revolution as a topic of interest and as a political event worthy of commemoration. This indifference dovetails with the state’s own counter-revolutionary discourse that sees all opposition as disruptive to national unity and an impediment to national reconciliation. Although Putin acknowledges the revolution’s general historical importance, the more suitable histories for his brand of nation building are Prince Vladimir’s baptism in the Crimea (discursively binding the region to Russia), the founding of the Romanov dynasty, the victory in the Second World War and the modernisation project under Stalin (eschewing his terror). Alexander Etkind calls this the multihistoricism of contemporary Russian society: Russians are choosing different histories to fall back on and are unconcerned that these may not be reconcilable pasts.

Losing out to other Russian histories more appropriate to the state’s antipathy to radical change, the revolution, so influential at home and abroad, has been relegated to a footnote in the historiographies and collective memory of Putin’s Russia.

Sudha Rajagopalan is Assistant Professor of European Studies  at University of Amsterdam.