Washington could make it clear that increased military cooperation is off the table indefinitely and that bilateral ties are directly related to progress pertaining to the UN Human Rights Council resolution. 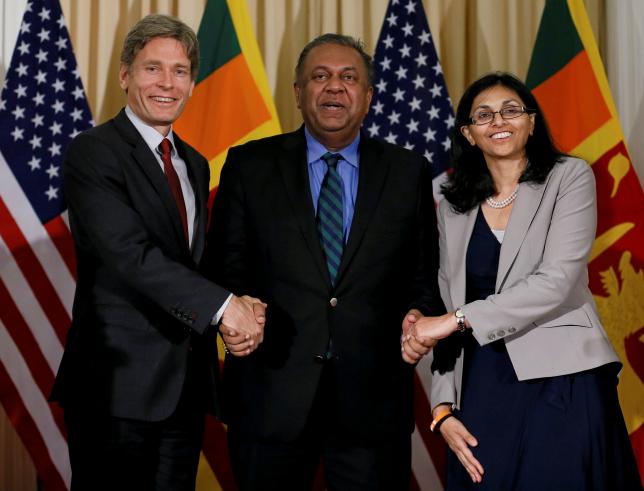 Sri Lanka’s compliance with a recent UN Human Rights Council (HRC) resolution on Sri Lanka was discussed in detail on June 29, during the HRC’s 32nd session. Significantly, the resolution – designed to heal the wounds of decades of war – was co-sponsored by Colombo last October.

Since longtime autocrat Mahinda Rajapaksa unexpectedly lost a presidential election in January 2015, the new government has assiduously worked to repair relations with a host of Western nations, especially the United States. And, while over the past 18 months some progress has been made, caution remains the order of the day.

Sri Lanka’s new government has taken the country in a less authoritarian direction. The passage of the 19th amendment to the constitution trimmed presidential powers that had been expanded on Rajapaksa’s watch. In June, a Right to Information bill was passed.

On the metric of rights, then, the new government is definitely better than the previous one. On the other hand, while Colombo now has a massive reform agenda, it’s not clear how much of it will ever be implemented. For example, corruption was a key reason why Rajapaksa lost the presidency. However, ongoing investigations still have not resulted in convictions or even many indictments. And, while Colombo is purportedly committed to transitional justice, those issues are not even being explained to the general public. Furthermore, people residing in the Tamil-majority Northern and Eastern Provinces still face a host of problems pertaining to militarisation, human rights violations and socioeconomic troubles. Colombo appears to be most invested in the possibility of a new constitution; whether such a document would satisfy the aspirations of the Tamil community remains an open question. In short, there are reasons to be worried that President Maithripala Sirisena’s legacy may be one of incremental change, not deeper reform.

UN high commissioner for human rights Zeid Ra’ad Al Hussein delivered a diplomatic and thorough oral update on Colombo’s progress. Frankly, the high commissioner’s language could have been stronger and more critical. That being said, his remarks should leave no doubt that most of the resolution’s prescriptions – pertaining to national reconciliation, accountability for war time abuses, institutional reform and human rights – have yet to be implemented.

US Ambassador to the HRC Keith Harper spoke briefly about Sri Lanka.

“We thank the high commissioner for his interim report requested last September detailing the progress Sri Lanka has made, and the important work that remains. We look forward to receiving the full report next March. In the interim we encourage the government of Sri Lanka to make continued tangible steps in fulfilling their commitments reflected in resolution 30/1 and elsewhere to credible justice, accountability, and reconciliation mechanisms.”

Unfortunately, that’s all Harper had to say. A range of other nations came with stronger words, including Canada, Ghana and several European countries.

Let’s keep in mind that diplomatic pressure on Sri Lanka over the past several years (at the HRC and beyond) was largely due to efforts led by Washington. With what appeared to be moral clarity and a vision for lasting peace in a war-torn nation, the US spearheaded three resolutions on Sri Lanka at the HRC from 2012 to 2014. Admittedly, the US is not a member of the HRC this year; nevertheless, a stronger statement would have been welcomed.

Mangala Samaraweera, Sri Lanka’s foreign minister, also spoke on June 29. He did what he usually does, painting a wildly optimistic picture of the new government’s performance thus far.

Tellingly, on June 28, US ambassador to Sri Lanka and the Maldives, Atul Keshap delivered a speech at the Ceylon Chamber of Commerce in Colombo. Keshap was unsurprisingly upbeat about America’s evolving bilateral relationship with Sri Lanka.

Here’s part of his prepared remarks:

“Today, ladies and gentlemen, it pleases me to report that American relations with Sri Lanka are at an historic high. As President Sirisena and Prime Minister Wickremesinghe lead their government in moving ahead with needed constitutional reform, national reconciliation, and fulfilling their United Nations commitments, the United States will remain steadfast in our support of efforts to rebuild the economy, advance good governance, and ensure that all Sri Lankans can enjoy equal rights, equal opportunities and the full benefits of post-conflict development and prosperity, regardless of their ethnicity or origins.”

The timing of Keshap’s speech, just a day before Colombo would go under the microscope of the Geneva-based HRC, will remind observers about a development that’s become increasingly clear since January 2015: human rights and accountability for alleged wartime abuses – matters which the US used to care deeply about – are no longer the priorities they once were for Washington. Keshap used similar language in a July 4th  message (to mark US independence day). “As fellow democracies bound by shared beliefs in universal freedoms, US-Sri Lankan relations are at a historic high,” he said.

Trade, aid, security cooperation and investment will probably shape the bilateral relationship in the months ahead. We’ll likely hear about how the difficult war-related matters will take time and that skepticism regarding Colombo’s plans is both unwarranted and unwise. We’ll almost certainly be reminded that the new government needs time and space to implement its ambitious agenda, but that more positive changes are sure to come. We may hear that there’s no need to worry that most of the reform agenda – from anticorruption efforts to transitional justice – still hasn’t been implemented. In essence, we’ll be asked to wholeheartedly agree with the Obama administration’s roseate assessment of the current state of affairs in Sri Lanka – and double down on an approach that’s based principally upon hope and naiveté, rather than an appreciation for the realities on the ground.

The visit would be an auspicious time for the Obama administration to be open and honest about difficult war-related issues, including accountability and the broader transitional justice process. Instead of praising the Lankan government, Washington could make it clear that increased military cooperation is off the table indefinitely and that bilateral ties are directly related to progress pertaining to the HRC resolution. Unfortunately, Biswal and Malinowski are unlikely to be conveying messages of this nature.

Taylor Dibbert is a New Leader at the Carnegie Council for Ethics in International Affairs, New York. The views expressed here are his own.