Washington and Seoul need to engage with Pyongyang, Beijing and Moscow to explore how a deal can be worked out.

It may be too late to reverse North Korea’s nuclear status. Credit: Reuters

Anyone who claims to have an answer to North Korea’s nuclear problem has been misinformed. A premeditated nuclear attack is unlikely from any side. Rather, the risk of war lies in the possibility of miscommunication, misperception and miscalculation that could see the cycle of provocation and escalation spin out of control.

The Korean War ended in 1953 with a ceasefire but not peace agreement. The 38th parallel is heavily militarised, barbed wire-fenced, mined and patrolled. Over six decades of demonising, isolating and sanctioning, the Kim dynasty-led regime has perpetuated a stalemate at escalating levels of insecurity. North Korea conducts another nuclear test, possibly more powerful than before. Or a longer-range missile test. US and UN impose additional or tougher sanctions. US and North Korea exchange more threats. The stalemate continues, but with heightened sense of insecurity on all sides.

North Korea’s ambition to acquire an intercontinental nuclearised capability has had four components, three of which have been realised. First, it has been making bombs. According to revised US intelligence assessments, it may have as many as 60 bombs. Second, tests in 2017 proved it has acquired intercontinental ballistic missiles (ICBMs), to put all of mainland US within range. Third, it has successfully miniaturised warheads to fit them on the nose cone of missiles. But further work is needed for another year or two to make warheads robust enough to withstand the rigours of re-entry into Earth’s atmosphere like extreme temperatures and vibrations.

All this  is a direct challenge to US President Donald Trump’s insistence that a nuclear North Korea is unacceptable to America. The exchange of inflammatory rhetoric  have shown both Trump and Kim Jong-un to be bombasts, posing  a clear and present danger to world peace. Between 62-75% of the world’s people believe that Trump is dangerous, arrogant, intolerant and unfit to be president, and yet his power to use nuclear weapons goes virtually unchecked. The existing protocol has been designed for speed and efficiency, not deliberation, and permits the president to launch nuclear weapons with a single verbal order.

It may be too late to reverse North Korea’s nuclear status. Sanctions are ineffectual as a tool of compellence. They generally do more harm than good. They are even less useful against North Korea which is already completely isolated and cut off.

Also read: What Is the Endgame of North Korea’s Nuclear Programme?

Military strikes are a non-starter, despite the “pattern of comments that indicate a preference for a military response to North Korea.” The US simply lacks the required degree of certainty to identify, locate and destroy all three categories of nuclear targets: warheads, the bomb production infrastructure and delivery vehicles. North Korea also has a formidable conventional artillery capability. For decades, North Korea has lived with hair-trigger sensitivity to a surprise US attack. According to a recent US Congressional research service study, between 30,000 to 300,000 people would die in South Korea in the first days of a new war resulting from the use of the North’s conventional artillery.

If North Korea used nuclear, biological and chemical weapons, the casualty level would escalate dramatically. If China joined the war, the casualties would jump and the theatre would expand beyond the peninsula. A protracted conflict could expand to Japan and US territories in the region. The report concludes that “an escalation of a military conflict on the peninsula could affect upwards of 25 million people on either side of the border, including at least 100,000 US citizens (some estimates range as high as 500,000).”

The harrowing thought for South Korea and Japan is that in the brutal logic of Trump’s ‘America First’ policy, millions of Japanese and Korean deaths are an acceptable price for taking out North Korea’s nuclear capability now, before they pose a threat to major US population centres. This would be a deeply immoral calculus, but Trump’s capacity for moral reasoning is limited. On August 15, a worried South Korean President Moon Jae-in warned publicly that any action against the North would require his consent. Would it? 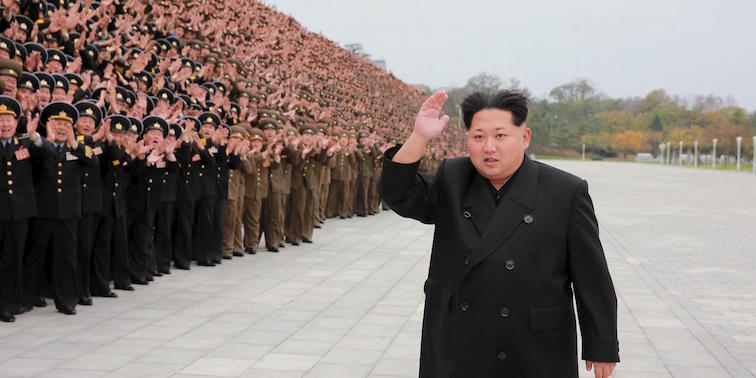 Against the backdrop of the strategic, military, economic and demographic imbalances in the peninsula, denuclearisation would leave North Korea in a state of extreme insecurity. Credit: Reuters

Each new tweet and step does further damage to the US’s responsible global leadership reputation while boosting China’s profile and prestige. It also helps to obscure China’s own past culpability in enabling North Korea’s (and Pakistan’s) nuclear program while underlining the history of US forcible regime change as the main driver of Pyongyang’s nuclear ambition. Any retaliatory trade measures against China would cause substantial damage to the US economy and also to US allies in global supply chains that run increasingly through China.

Chinese President Xi Jinping has urged restraint on both sides and called for a phased program to reduce tension. Stability and conflict-avoidance in the Korean Peninsula remains a vital national interest for China in order not to distract the country from development as its top priority. Its leverage over Pyongyang is limited. Any further weakening of Pyongyang’s links with Beijing and Moscow will feed Kim’s security paranoia and reliance on nuclear weapons as the only assured guarantee of regime and personal survival. US threats also stir memories of how the Chinese were treated in the early years of China’s own nuclear program. Nor have the Chinese forgotten their 200,000 soldiers who died in the Korean War.

In Beijing’s eyes, the US provokes a crisis with threats, war games and aggressive military exercises, holds China responsible for solving it but summarily dismisses Beijing’s proposals. In China’s calculation, on balance, the unpalatable status quo of a nuclearised North Korea is preferable to the upheaval that would result from military strikes or regime collapse.

Also read: Assumptions We Make About North Korea Which Are Wrong

Belligerent US rhetoric is also self-defeating in that it deepens North Korean attachment to the bomb. North Korean officials confirm their biggest lesson from the fates of Slobodan Milosevic (Serbia), Saddam Hussein (Iraq) and Muammar Gaddafi (Libya) was to get nuclear weapons to neutralise US regime-change tactics. The Kim dynasty has outwitted the US with greater tenacity, resourcefulness and single-minded determination.

North Korea is not simply a proliferation problem but a complex security challenge. Against the backdrop of the strategic, military, economic and demographic imbalances in the peninsula, denuclearisation would leave North Korea in a state of extreme insecurity. This is why Washington and Seoul need to engage with Pyongyang, Beijing and Moscow to explore which of the five elements of a deal that North Korea is seeking might be feasible: a peace treaty, comprehensive sanctions relief, end to US-South Korea joint military exercises, diplomatic recognition, acceptance of North Korean space activities and nuclear energy assistance.

Seoul is reported to have requested a postponement of joint US military exercises until the PyeongChang Winter Olympics are over on March 18, in order to reduce the chances of North Korean provocative actions during the games. The US will likely agree.

Hitherto Washington has insisted that talks can begin only after Pyongyang has shown it was serious about giving up nuclear weapons. On December 12, Secretary of State Rex Tillerson said the US is ready to begin talks “without preconditions,” albeit only after a “period of quiet” with no nuclear or missile tests. Meanwhile, China is reported to be building a network of refugee camps along the 1,400 km border for an exodus if the regime collapses or conflict breaks out.

The non-proliferation train left Pyongyang Central in 2006 with the first of six nuclear tests. Within two to three years, North Korea will either be an atomic wasteland, the likes of which we have not seen before, an active war zone, or a de facto nuclear-armed state. Learning to live grudgingly with that reality would be the worst outcome, except for all the alternatives.