If India and China are deepening their economic cooperation by setting aside their geo-strategic concerns, why can't the two countries cooperate on Nepal as well? 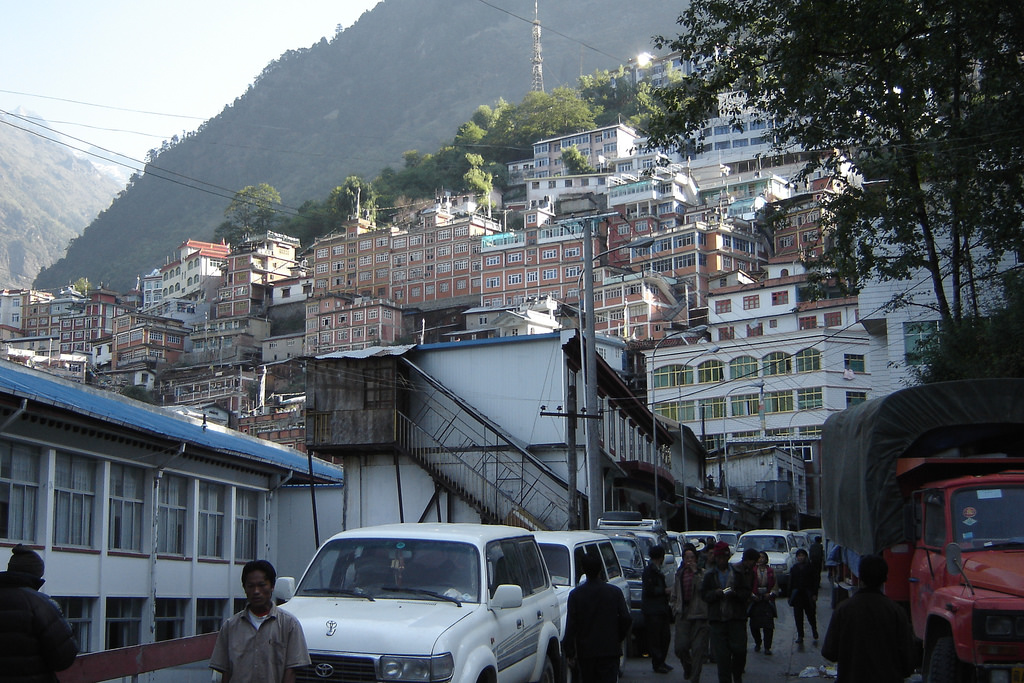 Zhangmu in Tibet, across the border from the Nepali crossing point of Tatopani. Credit: Bob Witlox/Flickr CC By-NC-ND 2.0

Kathmandu: Nepali prime minister K.P. Oli has just finished a week-long state visit to China, in what was his second state visit after his recent India trip.

While in Beijing, Oli signed a number of bilateral agreements, most notably one on transit facilities through China, thereby ending India’s monopoly over Nepal’s third-country trade. This is being seen in Kathmandu as meaningful as the common perception thus far was that given Nepal’s precarious geopolitical position, it had no option but to rely on India – its unpredictable ‘big brother’ next-door. This limiting belief made Nepali interlocutors defensive in their dealings with their Indian counterparts right from the start.

There have been other important agreements between Nepal and China during Prime Minister Oli’s visit. According to the joint Nepal-China statement issued on March 23, China has agreed to upgrade two road links between Nepal and Tibet, pledged financial support to build an international airport at the tourist hub of Pokhara, agreed to extend the Chinese railway to Kathmandu and then to Lumbini, and given its nod to a long-term commercial oil deal. Up until now Nepal has imported all its fuel from India.

All there are indications, in the eyes of the security hawks in New Delhi, of how China is checkmating India in Nepal. But is that really the case?

One of the reasons India decided to go along with the four-month-long blockade on Nepal was because it felt the Kathmandu establishment was ignoring its concerns, especially on the issue of Madhesi rights. New Delhi felt that while its concerns were being ignored, those of China were amply accommodated in the new charter that was promulgated on September 20, 2015.

But paradoxically the blockade, as we see, has brought Nepal and China even closer.

At this point, it bears reiterating that Oli, in keeping with the Nepali tradition, chose, upon becoming PM, to go to India first. In doing so, he wanted to assure New Delhi that he was keenly aware of the traditionally strong Nepal-India relationship, and that Nepal’s recent overtures to China are not in any way inimical to Indian interests. Oli, moreover, understands that no prime minister in Nepal can stay in office for any length of time by alienating India. And it’s not just Oli who thinks like that.

Even as India remains paranoid about Chinese inroads into Nepal, nearly all top government officials in Kathmandu this journalist has spoken to in recent times maintain that China wants Nepal to always be on good terms with India. Beijing, they say, understands its geopolitical limits in Nepal. Even during Oli’s China trip, the Nepali delegation was clearly told that in the long run Nepal has no option but to have good relations with India.

Given this realisation on Beijing’s part, it is hard for them to understand India’s recent policies.

This is why many people in Kathmandu believe that the four-month-long blockade is the best thing that could have happened to Nepal. They see this as the perfect opportunity to end the state of Nepal’s near total dependence on India. For them, Nepal is a sovereign and independent country and must engage with the rest of the world, just like any other independent country would.

A common line of reasoning heard in the security establishment in New Delhi is that since the Himalayas cannot be shifted, it is useless of Kathmandu to try to play the ‘China card’.  “Now, we are not in the comparison business”, India’s external affairs ministry spokesman said on March 22, 2016 when asked about the significance of Oli’s visit to China. “And even if you are, do ask yourself, is there any other country in the world which can have the kind of relationship that Nepal has with India?” If only Indian officials cared to look at developments in Nepal over the past few months they would see that the Nepal Army has been working tirelessly to open new tracks to Tibet. China has also now pledged to build all-weather, multi-lane cross-border roads. If these road projects come through, and when the Chinese railway comes to the Nepal border (and beyond), there will be no need for Nepal to play the proverbial China card against India. The greater presence of the Chinese in Nepal will, in that case, be a reality that India will have to live with.

Alternately, some in New Delhi believe that even though Nepal is keen on deepening its links with China, the Chinese are reluctant as greater engagement with Nepal will mean more traffic, of both people and goods, with Tibet. China apparently doesn’t want that since the border could then serve as a new conduit for Free Tibet activists. This is true, up to a point. This is the reason China has been reluctant to reopen the Tatopani border – heretofore the main trade hub between Nepal and China – that was blocked after the earthquakes in Nepal last year. It feels Tatopani has been misused by Free Tibet activists.

But belying this perception is the new agreement on upgrading of the existing roads in Nepal leading up to the Chinese border and the new rail agreement connecting Tibet with the main cities in Nepal. The Chinese seem to realise that sooner or later they will have to open up Tibet to the outside world; it’s not a matter of if but when.

Of course, all these developments are not at all a bad thing for India. If Nepal starts trading more with China and other countries, it will not have to rely on India so much. This in turn will help reduce anti-Indian sentiments in Nepal, which is at an all-time high following the blockade. India will also get to see that China, its biggest trade partner, has no great designs on Nepal, where, all signs suggest, China accepts India’s sway.

If India and China are deepening their economic cooperation by setting aside their geo-strategic concerns, why can’t the two countries cooperate on Nepal as well? At least China seems comfortable with the idea. Chinese President Xi Jinping broached the topic of making Nepal an economic ‘bridge’ between India and China during his recent meeting with Prime Minister Oli. It’s a wonderful idea, a win-win for all three sides.

For instance there are now proposals for India and China to work together on key hydro projects in Nepal like Arun III, the PDA for which was signed between Nepal and India during Prime Minister Narendra Modi’s Nepal visit in 2014. Chinese expertise could be used to expedite the on-again, off-again project. When it comes through, Nepal can then sell the generated power, as indented, to India.

But for this kind of trilateral cooperation to materialise, the Indian establishment has to be more comfortable with the idea of Nepal’s greater engagement with the rest of the world. India must accept that the old Nehruvian idea of an exclusive ‘sphere of influence’ is outdated. It must realise that the only way India can improve its relations with its small neighbours is through greater economic cooperation – by allowing the free movement of goods and people across the region, and not blocking their natural flow.