As political parties refuse to come to an understanding weeks after Nepal's historic election results were declared, there is still no trace of a new government. 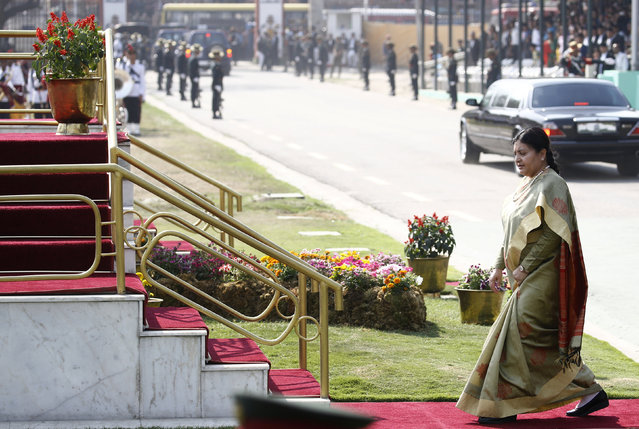 Kathmandu: The communist coalition’s landslide win in Nepal’s recent elections set off tremors within and without but several weeks have since gone by without the new government in sight. The elections were meant to mark the final phase in the country’s long political transition from the abolition of the monarchy to the establishment of an inclusive, federal republic. The fact that they haven’t is as much a reflection of old political habits as it is of last minute constitutional and administrative wrinkles.

The first reason for the delay in the formation of the national assembly was President Bidya Devi Bhandari’s decision to sit on an ordinance on the federal upper house for two months even though she had no legal authority to do so.  Bhandari – who was elected as the (nominal) head of state on the recommendation of the Communist Party of Nepal-Unified Marxists Leninists (CPN-UML) – is angling for another term as president, and was acting on the instruction of her mother party, the UML, which has emerged as the single biggest political entity after the recently-completed elections for three tiers of governments: local, provincial and federal. The UML reigned supreme on each tier. Together with its alliance partner, the Communist Party of Nepal (Maoist Centre), the UML will now have an absolute majority in the 275-member federal lower house and it will also get to form the government, in an alliance with the Maoists again, in six of the seven federal provinces.

But while the election to the lower house is based on universal adult franchise, the upper house is to be elected based on electoral colleges comprised of elected representatives at the local and provincial levels. The ordinance on the upper house, that was forwarded by the current (Nepal Congress-led) caretaker government of Sher Bahadur Deuba to the president, had proposed that election to the upper house be based on ‘single transferable vote’. This method would ensure some presence of the ruling Nepali Congress as well as of other smaller parties in the upper chamber.

But UML opposed the system. Following its sweeping victory in the local elections, the first of the three elections, UML wanted a majoritarian system of election to the upper house to help it get the most seats. It thus lobbied for the upper house to be elected based on ‘block votes’, which, given the new electoral map of Nepal, would have meant that nearly all of the 59-member national assembly would be filled by UML and Maoist appointees.

Interestingly, the original ordinance had also proposed a block-vote system, which the ruling Congress changed when it became clear that this system would not suit it. This is why President Bhandari was under UML pressure to not approve the ordinance. Prime Minister Deuba, meanwhile, insisted that he would not step down before the formation of the upper house on the basis of single-transferable vote. The UML-Maoist left alliance and its leader KP Sharma Oli appeared as rigid on block votes.

Thus the impasse over the formation of new government dragged on for a fortnight after the publication of the final results of the first-past-the-post (FPTP) component of the combined provincial and federal elections. But with Oli itching to become prime minster again, and with seemingly no other way to remove Deuba, the UML leader was forced to give his tacit nod to the ordinance.

Thus, after holding on to the ordinance for two months since the Deuba government first forwarded it, President Bhandari gave it her blessing on December 30. Theoretically, this cleared the way for the formation of the new government.

But the new government may still take more time to fashion. Completing the complicated process of electing the upper house is expected to take around a month and a half. Before that, the government will have to appoint governors of all seven provinces as well as fix the temporary headquarters of the provinces. Both of these tasks will entail a great deal of controversy. For instance, Deuba wants to appoint governors before leaving office; UML and Maoist leaders insist that their provincial cabinets will not take oath under Deuba’s appointees.

The task of fixing temporary provincial headquarters is no less dicey. People want the headquarters to be close to their homes so that they don’t have to travel long distances for official duties. There have predictably been protests and counter-protests against some proposed temporary headquarters. The locals of the eastern hill town of Dhankuta, for example, want the headquarter of Province 1 for themselves, even though the old industrial town of Biratnagar in the Tarai plains is the most natural contender. People fear that setting up of temporary headquarters somewhere else will be tantamount to completely giving up their claim. Province-level politicians are under tremendous pressure to establish these headquarters close to home.

Then there is the issue of the appointment of women in parliament. According to the new constitution, there should be at least 33% women in the national parliament. But only six out of 165 lawmakers (or under 4%) who were elected in the federal parliament under FPTP system are women. The remaining quota must be filled up through the proportional representation (PR) component. The Election Commission thus has to clearly vet the list of PR names submitted by the political parties to ensure women’s adequate representation. It will likewise have to vet the parties’ lists for mandatory representation of other marginalised communities, again as provided in the new constitution. All this will take time.

This is why the left alliance has been constantly lobbying with the election commission to shorten this lengthy process. It argues that since the alliance already has enough seats to form the government, there is no legal hurdle in replacing Deuba as prime minister. But Congress argues that a new government can be formed only after both the upper and lower houses of federal parliament come into being.

Doing it with grace

In the best-case scenario, the new government could be formed some time in mid-February. It will not be at all surprising for the process to be held up if there are mass demonstrations against some of the proposed administrative headquarters or because a legal case is filed against a government decision impacting the formation of the new federal setup. Deuba could also look to hang on by using every trick in his well-thumbed political book. The recent news of a rift between Oli and Maoist chairman Pushpa Kamal Dahal ‘Prachanda’ will further encourage Deuba’s Congress.

Yet the left alliance is unlikely to implode. Both Oli and Prachanda know that they need each other. Oli will not be able to become prime minister without Prachanda’s help; Prachanda’s own ambition to return to power will be thwarted if he moves away from Oli now. The best way to ensure the longevity of the alliance would be for Oli and Prachanda to agree to become prime minister for two-and-a-half years each in a five-year term. Whether such an arrangement will be in Nepal’s interest is a different question altogether.

Nonetheless, with UML conceding the Nepali Congress’s demand for a single-transferable vote on election of the upper house, Deuba and his Congress party will be under moral pressure to reciprocate this gesture of goodwill and plan for a graceful exit.

Biswas Baral is a Kathmandu-based journalist and tweets at @biswasktm