India has maintained that its map is correct and that no borders have been revised. 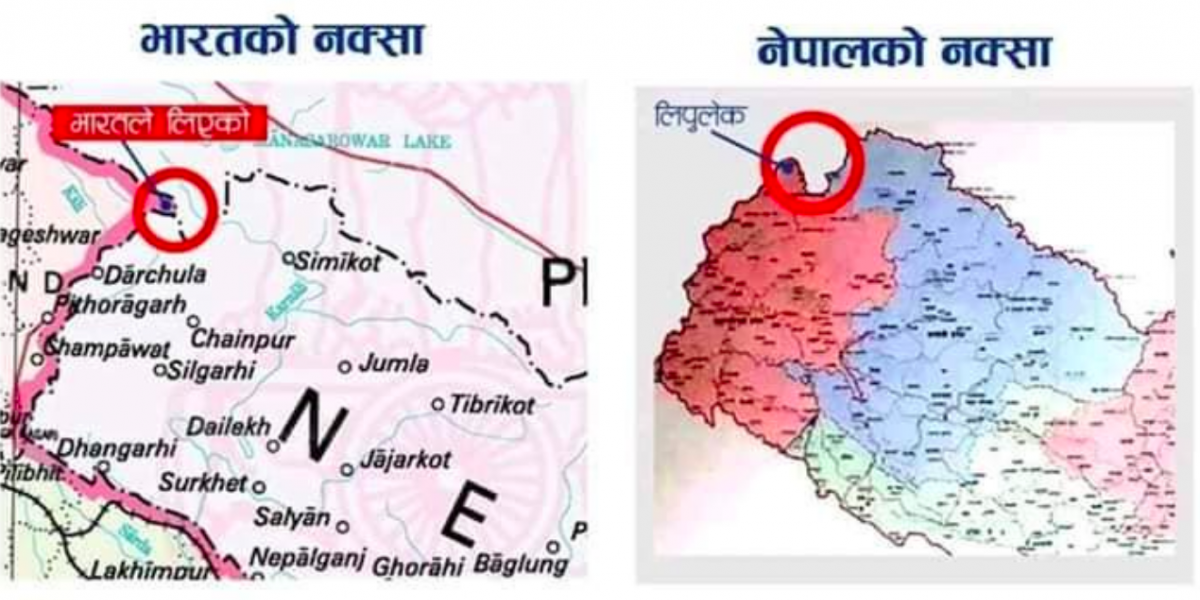 One of the visuals doing the rounds on Twitter, showing purported 'misrepresentations' of the Indian border in the map. Photo: Twitter

Kathmandu: Nepal’s government, political brass and people have been up in arms against the new political roadmap released by India which places Kalapani, a territory claimed by Nepal, within Indian borders. India, however, has maintained its innocence.

In a public statement issued in Nepali, the Ministry of Foreign Affairs has said, “The Nepal government is very clear that Kalapani is a Nepali territory and any unilateral move to alter the border demarcation is not acceptable.”

‘Nepal govt is clear that Kalapani area belongs to us’

The statement further states that the Nepali government is fully committed towards protecting its international borders.

The statement by the Nepali foreign ministry – which has not been yet put up on the official website and has been posted on the official Twitter handle – is understood to have arrived after much domestic pressure on the government to make its position clear on the new map.

The Prime Minister’s Foreign Affairs Adviser, Rajan Bhattarai, spoke with mediapersons on Wednesday, reiterating that Kalapani is Nepali territory. Foreign Minister Pradeep Gyawali, however, has not spoken on the issue publicly yet.

Nor has the ruling Nepal Communist Party (NCP). However, sister organisations of the ruling party mainly students’ and youth unions have taken to the streets in protest. Social media too is being flooded with criticisms of India, along with the demand that India correct the map.

Nepal’s main opposition, the Nepali Congress, and other fringe parties have also spoken against the new political map. However, Madhes-based parties have not been openly critical about it.

Meanwhile, MEA spokesperson Raveesh Kumar has said that the map is accurate in its depiction of the sovereign territory of India. “The new map has in no manner revised our boundary with Nepal. The boundary delineation exercise with Nepal is ongoing under the existing mechanism. We reiterate our commitment to find a solution through dialogue in the spirit of our close and friendly bilateral relations.  At the same time, both countries should guard against vested interests trying to create differences between our two countries,” he has added.

Raveesh Kumar, Ministry of External Affairs (MEA) on reports of Nepal’s objection to inclusion of Kalapani as part of India in the new maps of J-K, & Ladakh: Our map accurately depicts the sovereign territory of India. The new map has in no manner revised our boundary with Nepal. pic.twitter.com/rAfLXkFRbx

In addition to tussle over minor issues such as management and maintenance of the pillars at the border, Nepal and India have had longstanding disputes over two major border points at Kalapani and Susta. There is also further need for construction and repair of boundary pillars. The no man’s land, too, has been encroached upon. A joint boundary group of both countries have been finalising the technical modalities in solving the issues, but progress has been slow.

On March 8, 2017, the border issue received prominence when India’s Border Security Forces killed one Govinda Gautam in Nepal’s Kanchanpur district. Nepali leaders met with Indian leaders in the aftermath of the incident and the Indian side had promised an investigation. However, no such reports have been made public yet.

As far as the border disputes of Kalapani and Susta are concerned, they remain a major agenda of every bilateral engagement but there has not been substantial progress in the matter. The latest efforts were made in 2014 when Nepal and India held a joint commission meeting led by the foreign ministers of both countries, after a hiatus of 23 years.

The commission instructed the foreign secretaries of both countries to resolve the issues but no subsequent meetings took place to address them.

In 2016, Nepal and India formed the Eminent Persons Group in order to look after the gamut of bilateral issues, including the border dispute and the Peace and Friendship Treaty of 1950.

The EPG has conducted a detailed study about the border issues between the two countries but the report which was finalised in 2018 is gathering dust.