While the army will likely continue to use the judiciary as a pawn and wield power from behind the scenes, it remains to be seen if any other leader can stand up to it. 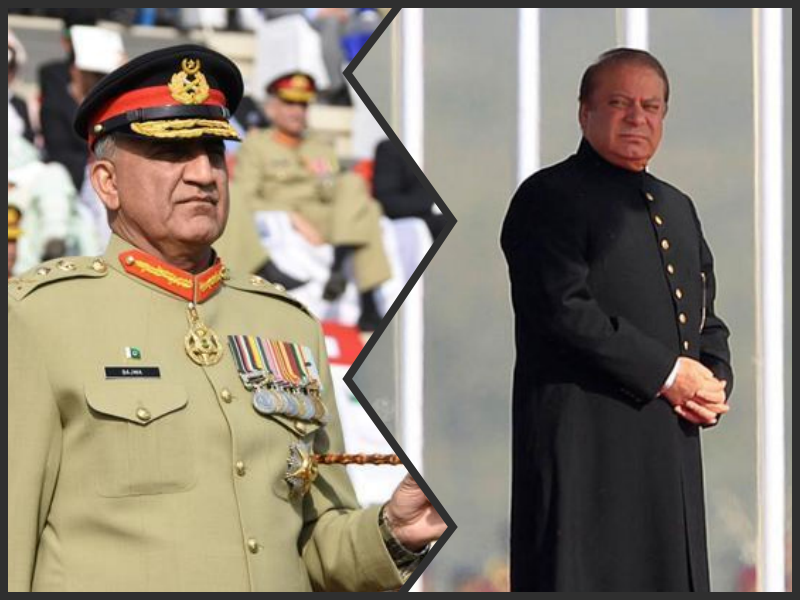 The Supreme Court of Pakistan sent the country’s elected prime minister Nawaz Sharif packing last week on a flimsy charge of failing to disclose potential wages from a ceremonial position he had once held in his son’s UAE-based company. The non-disclosure was used by the court to invoke a moral turpitude clause that had been inserted in the constitution by a former military dictator, General Zia-ul-Haq, to serve as a tripwire against the parliamentarians. With the exception of Zulfikar Ali Bhutto, who came close to completing a five-year term, none of Pakistan’s 15 prime ministers have been able to serve their entire terms in office. The Supreme Court has a long history of collaborating with the Pakistan army against civilian rulers, including sending Bhutto to the gallows. And it is no different in Nawaz’s case.

Simmering tensions with the army

The court seems to have used the gavel to conduct a hatchet job on behalf of the army, which has been on a ‘Get Nawaz’ mission since the prime minister took office in 2013. Nawaz’s third stint as prime minister – he was first dismissed by the president on the army’s behest and ousted in a coup the second time around – had been marred by simmering tensions with the Pakistan army. He started off by vowing to bring to justice former dictator General Pervez Musharraf who had toppled his government in the infamous 1999 coup d’état. The brass took this not just as an attempt to bring to book a general who had committed high treason but also as an effort by Nawaz to tame the whole army and secure civilian supremacy over it.

The army, through former and serving Inter-Services Intelligence (ISI) chiefs, prodded one of Nawaz’s key rivals, Imran Khan, to mobilise the street against him on the pretext of an alleged rigging in the 2013 elections. Khan and his Pakistan Tehreek-e-Insaf (PTI) launched a dharna in 2014, holding the capital Islamabad hostage for months on end. The PTI numbers on the street were not enough, however, to force Nawaz to step down. The matter ultimately ended up in the courts, which failed to find any evidence of rigging. Nawaz enlisted help from the fellow parliamentarians who closed ranks to stare down Khan whose hordes had threatened and planned an assault on the parliament. The dharna fizzled out but the army had succeeded in squeezing Nawaz enough that he had to back down from actively prosecuting Musharraf. When the ever-pliable judiciary allowed the tin-pot dictator to leave the country, he immediately fled and remains an absconder till date.

Judiciary, a pawn in military’s hands

The intrigue, however, did not die down as the army remained irked with Nawaz for his peace overtures to their arch-rival India, especially his visit for Prime Minister Narendra Modi’s inauguration and a reciprocal visit by Modi to Nawaz’s ranch near Lahore. While taking any concrete steps towards building peace with India remained clearly outside Nawaz’s purview, even the talk of normalisation was taken as an affront by then army chief, General Raheel Sharif. The so-called Panama Papers, in which Nawaz’s family members were named for their offshore holdings, provided another opportunity for Khan and his military backers to lunge at Nawaz. Khan started mobilising the street again, and Nawaz blinked this time and agreed to an inquiry by the Supreme Court, effectively waiving his constitutional right to legal due process involving trial courts first.

The Supreme Court was only too eager to arbitrate what effectively was a civil-military tiff and a political feud. That the Supreme Court had a rather malicious agenda became clear during the prolonged proceeds during which judges, chock-full of moral certitude, pontificated against Nawaz from the bench. One judge went as far as to compare him to a fictional mafia boss, The Godfather.

The joint inquiry team commissioned by the court included an ISI nominee, something that Nawaz did not challenge, to his peril. That a counter-intelligence service man was sitting in an inquiry against an elected office holder for a white collar crime, smacked of the political nature of the whole court drama. Judges and generals seemed to have ganged up to stack the deck against Nawaz. Despite the inquiry team churning out reams and reams of alleged evidence against Nawaz’s financial scruples, the Supreme Court nailed him on a nondisclosure of a paltry amount, which he was entitled to, but never actually received.

In an abjectly perverted manner, the court has disqualified the prime minister but has ordered a further inquiry and action by the National Accountability Bureau into the findings of its investigation team. Whether or not Nawaz is guilty of financial impropriety, he sure as hell was not convicted of that in the court decision. That the court has shot the man first and intends to ask questions later indicates that it was a malicious, political decision delivered in an unholy haste to appease the military brass. The army has exacted its pound of flesh.

Attempts to back down failed to soften the army

Ironically, despite his desire to assert himself as the elected chief executive, Nawaz did attempt to assuage the army’s apprehensions, almost appeasing the junta. He totally abdicated the country’s foreign policy to the military to the extent that he could not get his nominees appointed ambassadors to certain western capitals. He did not have any say in the army’s handling of the Afghan policy and did not even pretend to interfere in that longest running, unmitigated disaster.

After beating a retreat on the India policy, Nawaz did not make any overt noise about normalising relations with New Delhi. On the domestic side, he let the army handle the jihadist terrorism issue, which meant that the military continued to nurture India- and Afghanistan-oriented jihadists, while neutralising the ones targeting Pakistan. Nawaz let General Raheel run the whole show and corps commanders presided over unconstitutional bodies called apex committees in each province. He conceded the army’s demand for establishing draconian military courts and got the parliament to give them a constitutional cover. Nawaz did not utter a word about the army’s dirty war in Balochistan, where it continues to abduct, torture, kill, mutilate and dump the secular Baloch separatists. Similarly, the army demanded a free reign in Karachi to crackdown on the ethno-linguistic party Muttahida Qaumi Movement (MQM) and Nawaz obliged without a whimper. The army unleashed illegal detentions and torture of MQM cadres loyal to the party’s founder Altaf Hussain. Clearly, none of these measures could allay the military’s mistrust of Nawaz. Clearly, feeding the crocodile, hoping it will eat him last did not work out for Nawaz.

Turning over and playing dead sure bought Nawaz some time but the outcome was inevitable. Could a more overt confrontation with the military have helped his position vis-à-vis the junta? Perhaps yes, but it would have needed a robust narrative building, public awareness, voter and agitator readiness, and above all, reliance on and reactivation of the parliament, something that Nawaz failed to do. There is no shortcut to good old-fashioned political mobilisation both within the parliament and in the constituencies. He ignored the parliament at his peril and went on to play on the opponents’ chosen pitch.

The issue, however, is that ousting an elected prime minister arbitrarily and on such flimsy grounds has never strengthened any democracy and this instance is no different. If a leader of Nawaz’s stature, who drew his political power from Pakistan’s most populous province, Punjab, had to acquiesce to the army on so many issues, would any other Pakistani leader be able to stand up to the junta? In the foreseeable future, the army will continue to wield power from behind the scenes, a tutelary role that it has perfected since the 2008 restoration of democracy in Pakistan. The army will further consolidate its chokehold over the national security and foreign policies, meaning that an unabated jihadist intervention in Afghanistan will continue. Similarly, the relationship with India will remain rancorous and the future civilian dispensations are unlikely to touch this hot potato. On the domestic side, one can expect to see machinations to carve up the Pakistan Muslim League (Nawaz) by way of defections. The party is expected to elect Nawaz’s younger brother Shehbaz Sharif as prime minister in 45 days. Shehbaz is perceived as non-confrontational towards the army but that may not be enough to keep it from undermining the party.

Parliament will continue to grow weaker, especially if the 2018 elections produce a fractured mandate and/or a hung national assembly. Nawaz, however, has been the comeback kid of Pakistani politics, returning to power after his two previous ousters; pulling it off again would take a herculean effort to organise, energise and mobilise his base.