Modi, however, did not use the word ‘Rohingya’, in line with Myanmar’s claim that the term is a fictional construct. Nor was there any discussion on the refugee crisis that has been triggered. 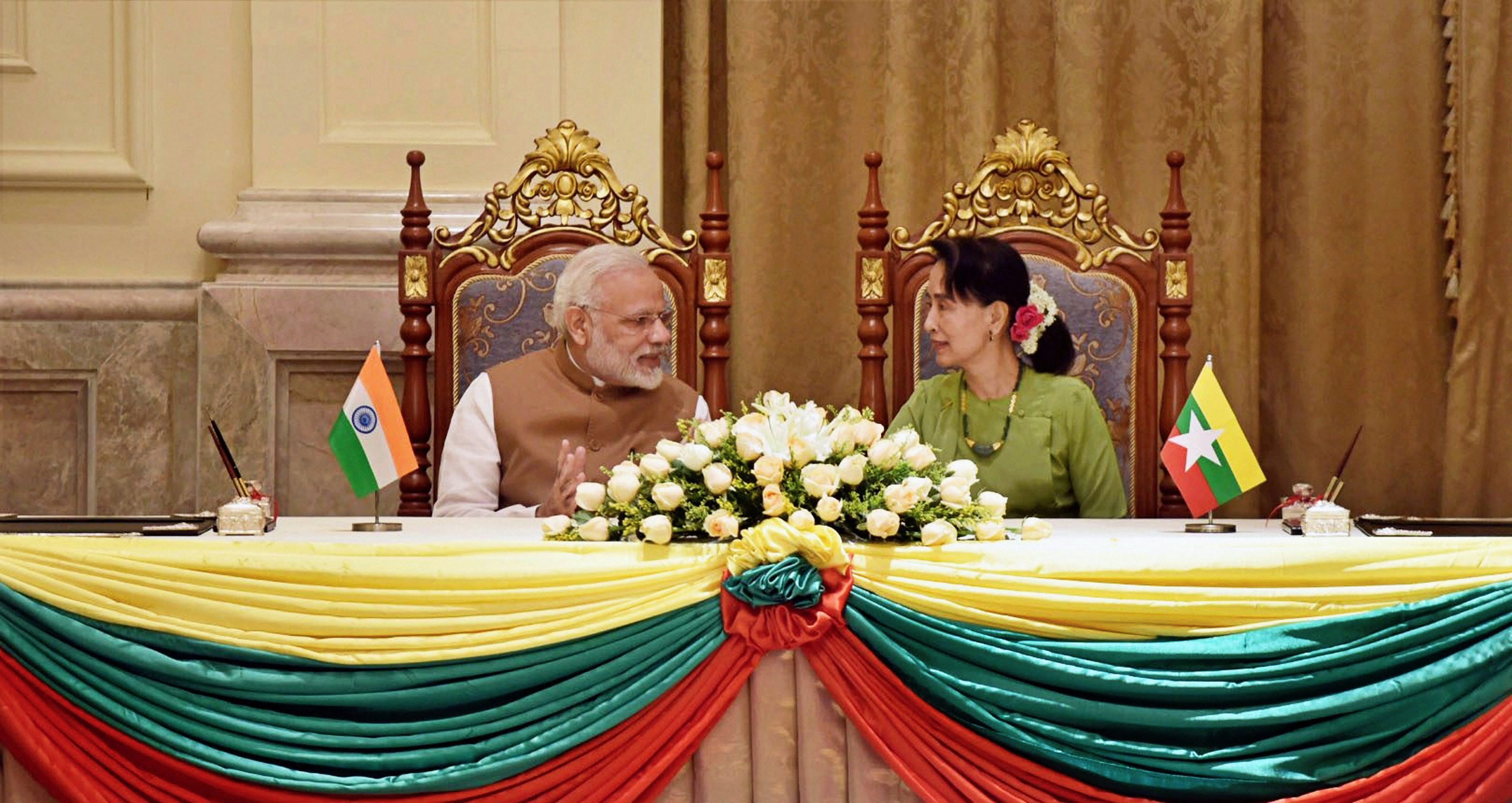 New Delhi: As the world continues to focus its spotlight on the unfolding Rohingya refugee crisis, Prime Minister Narendra Modi shared “concern” with the Myanmar government on “extremist violence” in Rakhine province.

“We are partners in your concerns over the loss of lives of security forces and innocent people due to the extremist violence in Rakhine State” he said.

As per long-standing Indian tradition, Modi did not use the word ‘Rohingya’ in his remarks, in line with Myanmar’s objection that the term is a fictional construct, despite living there for generations. The Myanmar government claims that Rohingya are illegal immigrants from Bangaldesh and only refer to them as ‘Bengalis’.

In her brief statement, Suu Kyi acknowledged Indian support. “We would like to thank India particularly for its strong stand that it has taken with regard to terrorist threat that came to our country a couple of weeks ago,” she said, adding, “We believe that together we can work to make sure that terrorism is not allowed to take root on our soil.”

Modi’s visit and the verbal support comes amidst almost universal criticism of the Myanmar government – and especially Suu Kyi – for the security crackdown after the August 25 attack by Rohingya terrorists on security personnel in Rakhine.

According to the UN, nearly 150,000 people have streamed into Bangladesh, while several others have died on the way, drowning from capsised boats.

UN secretary general Antonio Guterres said that the “grievances and unresolved plight of the Rohingya have festered for far too long and are becoming an undeniable factor in regional destabilization”.

He warned that “this will only further increase radicalization.”

India had reacted to August 25 attack with a statement condemning the violence against security personnel. But there was no mention of the consequent crackdown or the refugee crisis. New Delhi has consistently support Myanmar over the years against criticism on multilateral fora on the handling of its Rohingya crisis.

The Indian government had earlier this month indicated that it was ready to deport over 14,000 Rohingya refugees – though it is not clear where they will be sent.

In a petition against this move, Supreme Court had asked for an explanation for this proposal.

At media briefing on Tuesday, minister of state for home affairs Kiren Rijiju bristled against criticism by human rights organisations on the proposal to deport Rohingya refugees.

“I want to tell the international organisations whether the Rohingya are registered under the United Nations Human Rights Commission or not. They are illegal immigrants in India and as per law they stand to be deported,” he said.

“Be it a large peace process or be it to resolve a specific problem, we hope that all the stakeholders together can work together in the direction to find such a solution that will ensure peace, justice and dignity for all by respecting the unity and territorial integrity of Myanmar,” he said.

He noted that the it was important for India and Myanmar to “work together to ensure the stability of our long territorial and coastal borders”.

On the connectivity front, the Indian prime minister said that work has completed on the Sittwe port and Paletwa inland waterways terminal in the Kaladan project, while work has started on the road component.

He also mentioned that India has started to supply high speed diesel to Myanmar.

In total, 11 agreements were signed between India and Myanmar, which include pa pact to share white shipping information to improve data sharing on non-classified merchant navy ships or cargo ships.