The statement dropped an explicit reference to the South China Sea, even as both sides made an indirect criticism of China’s Belt and Road Initiative. 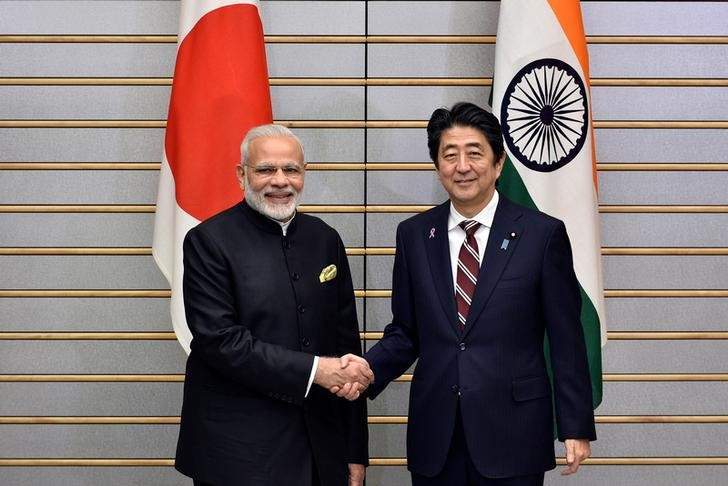 New Delhi: Even as Indian Prime Minister Narendra Modi laid out the red carpet for his Japanese counterpart, the joint statement released after their talks dropped an explicit reference to the South China Sea, even as both sides made an indirect criticism of China’s Belt and Road Initiative (BRI). With North Korea having recently conducted missile and nuclear tests, there was a strong call for “maximising pressure” against the hermit state.

Shinzo Abe and his wife got a taste of Gujarat’s culture on Wednesday, but on Thursday, they got down to the substantive part of their visit.

They laid the foundation for the first bullet train project in Ahmedabad and then held delegation-level talks.

The 2017 joint statement laid emphasis on a strategy for a “Free, Open and Prosperous Indo-Pacific”, with underlining of safeguarding and strengthening “rules based order”.

While the presence of China always hangs over India-Japan talks, there seems to be a bit of roll back from the 2016 joint statement.

This time, the prime ministers of India and Japan did reaffirm the importance of peaceful resolution of disputes, especially in accordance with the United Nations Convention on the Law of the Sea (UNCLOS).

The two prime ministers reaffirmed the importance of the freedom of navigation, overflight and unimpeded lawful commerce in accordance with international laws. They also highlighted the importance of peaceful resolution of disputes, full respect for legal and diplomatic processes, without resorting to the threat or use of force, and in accordance with the universally recognised principles of international law, notably the UNCLOS. The two prime ministers also reiterated their desire and determination to work together to maintain and promote peace, stability, and development in the Indo-Pacific region.

While a reference to UNCLOS is a coded mention of the South China Sea, the joint statement did not explicitly mention the international maritime dispute, unlike last year:

Regarding the South China Sea, the two prime ministers stressed the importance of resolving the disputes by peaceful means, in accordance with universally recognised principles of international law including the UNCLOS. [2016 joint statement]

When asked about the omission, foreign secretary S. Jaishankar claimed that since Indo-Pacific was mentioned, the South China Sea dispute was part of it. “If you mention full sets, sub-sets are covered,” he said. India’s top diplomat said that it was a principled position taken by India and not limited to a specific geography.

The India-Japan summit took place after the Dolkam stand-off between India and China came to an end, when Tokyo was the only country to publicly support New Delhi. However, Jaishankar said that Doklam issue was “not specifically mentioned” during the talks.

At the same time, there was an implicit criticism of China’s BRI, with the language used which harks back to India’s statement issued when it boycotted the BRI summit in Beijing in May.

The two prime ministers also underlined the importance of all countries ensuring the development and use of connectivity infrastructure in an open, transparent and non-exclusive manner based on international standards and responsible debt financing practices, while ensuring respect for sovereignty and territorial integrity, the rule of law and the environment. They also reaffirmed the importance of “quality infrastructure” which, among others, ensures alignment with local economic and development strategies, safety, resilience, social and environmental impacts, and job creation, as well as capacity building for the local communities.

Nearly all the above points were mentioned in the Indian spokesperson’s remarks on May 13:

“We are of firm belief that connectivity initiatives must be based on universally recognised international norms, good governance, rule of law, openness, transparency and equality. Connectivity initiatives must follow principles of financial responsibility to avoid projects that would create unsustainable debt burden for communities; balanced ecological and environmental protection and preservation standards; transparent assessment of project costs; and skill and technology transfer to help long term running and maintenance of the assets created by local communities. Connectivity projects must be pursued in a manner that respects sovereignty and territorial integrity.

Incidentally, while India had boycotted the BRI summit, Japan had taken part in the Beijing event. In fact, Abe had indicated in June that Japan was ready to take part in OBOR initiative, if certain conditions were met. 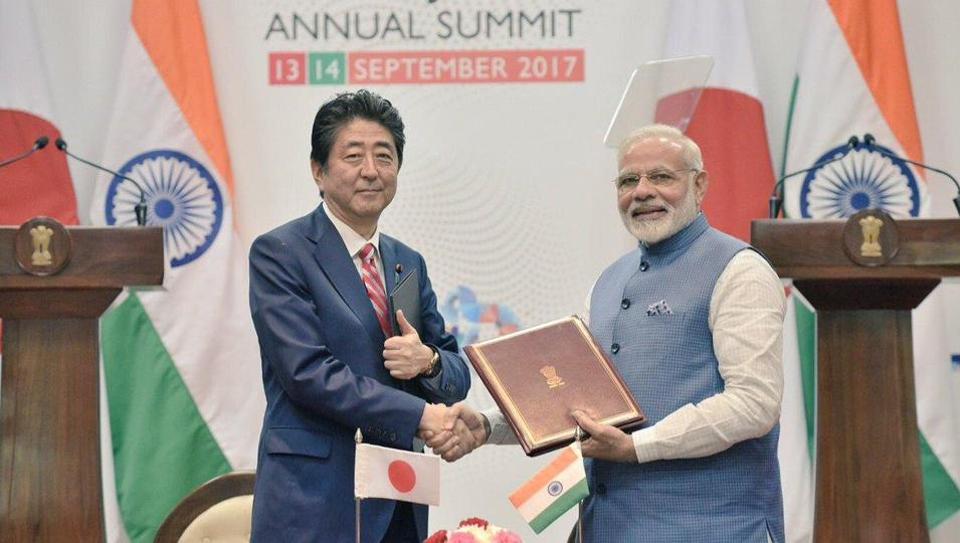 In connectivity, there was a focus on Africa, again – with both countries welcoming efforts to explore development of industrial corridors and industrial network for the growth of Asia and Africa. However, despite expectations, there was no formal launch of the ‘Asia Africa Growth Corridor’ during this visit.

A new India-Japan Act East Forum has been set up for Japanese investment in the north-eastern region of India. “The intent this time is to take it (cooperation in north-east) to a higher level… work within India and synchronise our cooperation in countries that border our north east, so that Act East policy benefits from that synchronisation,” he said.

Japan’s cooperation with India in the north-eastern region is a sensitive point for China, as large parts of the state of Arunachal Pradesh is claimed by Beijing.

On the defence front, while the two leaders noted recent progress on defence equipment and technology, there was no breakthrough in the sale of US-2 amphibian aircraft to India.

“Japan’s readiness to provide its state-of-the-art US-2 amphibian aircraft was appreciated as symbolising the high degree of trust between the two countries. The two governments decided to continue their discussions in this regard,” said the joint statement.

The bilateral documents also spoke about the “importance of bilateral cooperation in maritime security by strengthening and enhancing exchanges in expanding maritime domain awareness (MDA) in the Indo-Pacific region”.

There was specific mention of “close cooperation” between the navies in the anti-submarine aspects.

Compared to previous statements, both sides dwelled a lot on the Korean peninsula.

“There was a lot of discussion on North Korea. There was complete meeting of minds,” Jaishankar said.

The prime ministers pledged to work together to deal with the current serious situation and called on the international community to rigorously and fully implement relevant UNSC resolutions to maximise pressure on North Korea. They stressed the importance of holding accountable all parties that have supported North Korea’s nuclear and missile programmes. They also urged North Korea to address at the earliest the abductions issue.

Earlier this month, India had participated in the BRICS summit in Xiamen, which had also made a strong statement on North Korea. “We express deep concern over the ongoing tension and prolonged nuclear issue on the Korean Peninsula, and emphasise that it should only be settled through peaceful means and direct dialogue of all the parties concerned,” said the Xiamen Declaration of the ninth BRICS summit.

However, while India had endorsed the BRICS statement which called for a dialogue, there was no just mention of a peaceful resolution in Thursday’s bilateral document.

Instead, both India and Japan made it clear that Pakistan and China should also be held “accountable” for having supported North Korea’s nuclear program.

“We have long had concerns about proliferation networks which have had direct impact on our security in the past, perhaps, the world did not see that point of view… Often the feeling was that if it is our problem, it is our problem, if it is their problem, then it is everybody’s problem….The fact that the north Korean program has come under a sharper closer scrutiny then warrants some examination of its backward linkages,” said Jaishankar.

As usual, there was also a paragraph on terrorism – the difference from previous statements being that terror groups like Jaish-e-Mohammad, Lashkar-e-Taiba were named.