'Mischievous, Biased': India on Reports About Its Role in Deliberations on Myanmar in UNSC

The Indian Embassy pointed out that the UNSC is 'seized of the matter' and urged patience to await the outcome of the process in New York. 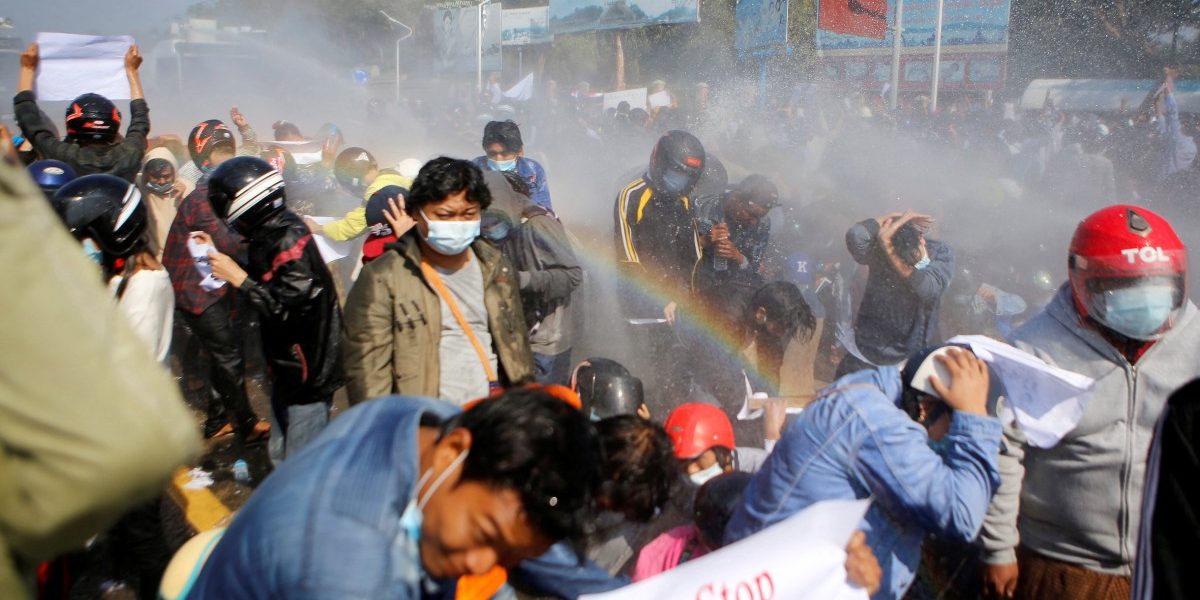 Police fire a water cannon at protesters rallying against the military coup and to demand the release of elected leader Aung San Suu Kyi, in Naypyitaw, Myanmar, February 9, 2021. Photo: Reuters/Stringer

New Delhi: After a news agency report led to angry social media posts about India’s role in negotiations for a United Nations Security Council (UNSC) resolution, Indian Embassy in Myanmar had to issue a statement asserting that these were “mischievous and biased” and urged patience to await the outcome of the process in New York.

Last Friday, the United Kingdom had introduced a draft text for a more robust action from the Security Council on Myanmar, where the military had effectively conducted a coup against the elected government on February 1. The Council had in February issued a press statement expressing deep concern. Since then, street rallies had snowballed, with over 60 protesters killed by security forces and more than 1,500 arrested.

In a post on official Facebook and Twitter accounts, the Indian Embassy in Yangon wrote, “We have seen reports on social media about India’s role in deliberations on Myanmar in the UNSC. These reports are mischievous and biased.”

It pointed out that the UNSC is “seized of the matter and let us wait for the outcome”. “India’s position on the issue is well-known and has been clearly articulated,” added the embassy.

The social media posts in Myanmar seem to have been triggered by a report by Reuters that noted that the Council failed to agree on a statement on Myanmar on Tuesday.

“During an initial bid to finalise the text, China, Russia, India and Vietnam all suggested amendments late on Tuesday to a British draft, diplomats said, including removal of the reference to a coup and the threat to consider further action,” said the report.

This led human rights activists to brand India along with China, Russia and Vietnam as “villains” for stopping a UNSC action, which had caused a barrage of angry messages from Myanmarese, especially on the Embassy’s Facebook page.

The people of #Burma should know that when it comes to UN Security Council inaction on #Myanmar's military coup — these are the villains stopping any action. Russia, China, India, & Vietnam. @mfa_russia @MFA_China @PMOIndia @MOFAVietNam #SaveMyanmar https://t.co/KENhtu3rvP

In Myanmar, social media, especially Facebook, is a highly popular medium widely used by the government and pro-democracy protestors.

Earlier on Wednesday, ‘#ProtestSrilanka’ had trended among Twitterati in Myanmar after a letter was leaked that Sri Lanka, as chairman of BIMSTEC, had invited the foreign minister of the new military government to a ministerial meeting in Colombo.

The sharp response led the Sri Lankan foreign secretary to clarify that his country had invited Myanmar because it was a member nation of BIMSTEC and had not been removed or suspended. “That doesn’t mean we have accepted the Myanmar military government. We have not taken a position on that,” foreign secretary Jayantha Colombage said.

Since the start of the protests, China has been a target, with the popular perception being that the military junta is not bothered by international criticism due to strong backing from Beijing. There had also been a rising call to boycott Chinese firms and goods.

Myanmar news organisation, The Irrawaddy reported that two foreign ministry officials were detained over a “leaked document about an emergency meeting with the Chinese government representatives”. At the meeting, Chinese officials asked the junta to boost the security for Chinese development projects and pressure the media to help reduce scepticism towards China, said the news report.

While China and Russia had supported the UNSC press statement last month, they have publicly said at the general assembly that developments were an internal matter of Myanmar.

India’s position was again articulated on Wednesday by the minister of state for external affairs V. Muraleedharan in a written answer to Lok Sabha.

He stated that India had a direct stake in the developments in Myanmar, with whom it shared land and maritime boundary.

“The recent developments in Myanmar are therefore of deep concern. India has urged that the rule of law and democratic process be upheld and called upon the Myanmar leadership to work together to resolve their differences in a peaceful and constructive manner,” said the Indian minister in parliament.

He stated that India will closely monitor the situation in Myanmar and “remain in discussion with the international community, including at the UNSC on this issue”.

Meanwhile, the Indian Embassy issued an advisory to all Indian citizens to exercise “utmost caution in view of the complex ground situation.

It suggested seven measures for citizens:

“There are often disturbances at locality level and security forces are dispersing gatherings. Clashes have the risk of affecting local residents and passers-by. Therefore, Indian citizens are advised to avoid areas of conflicts/clashes or where crowds might be gathering,” said the advisory.

The Indian Embassy also permitted Indian citizens “who are concerned about the situation” to avail of the Vande Bharat mission flights that were being operated due to pandemic restrictions.