Militant Buddhism Is on the March in South-East Asia – Where Did It Come From?

Ten years after the Saffron Revolution in Myanmar, some Theravāda Buddhist monks are now preaching violence against Muslim or Hindu minorities in the name of "holy war". 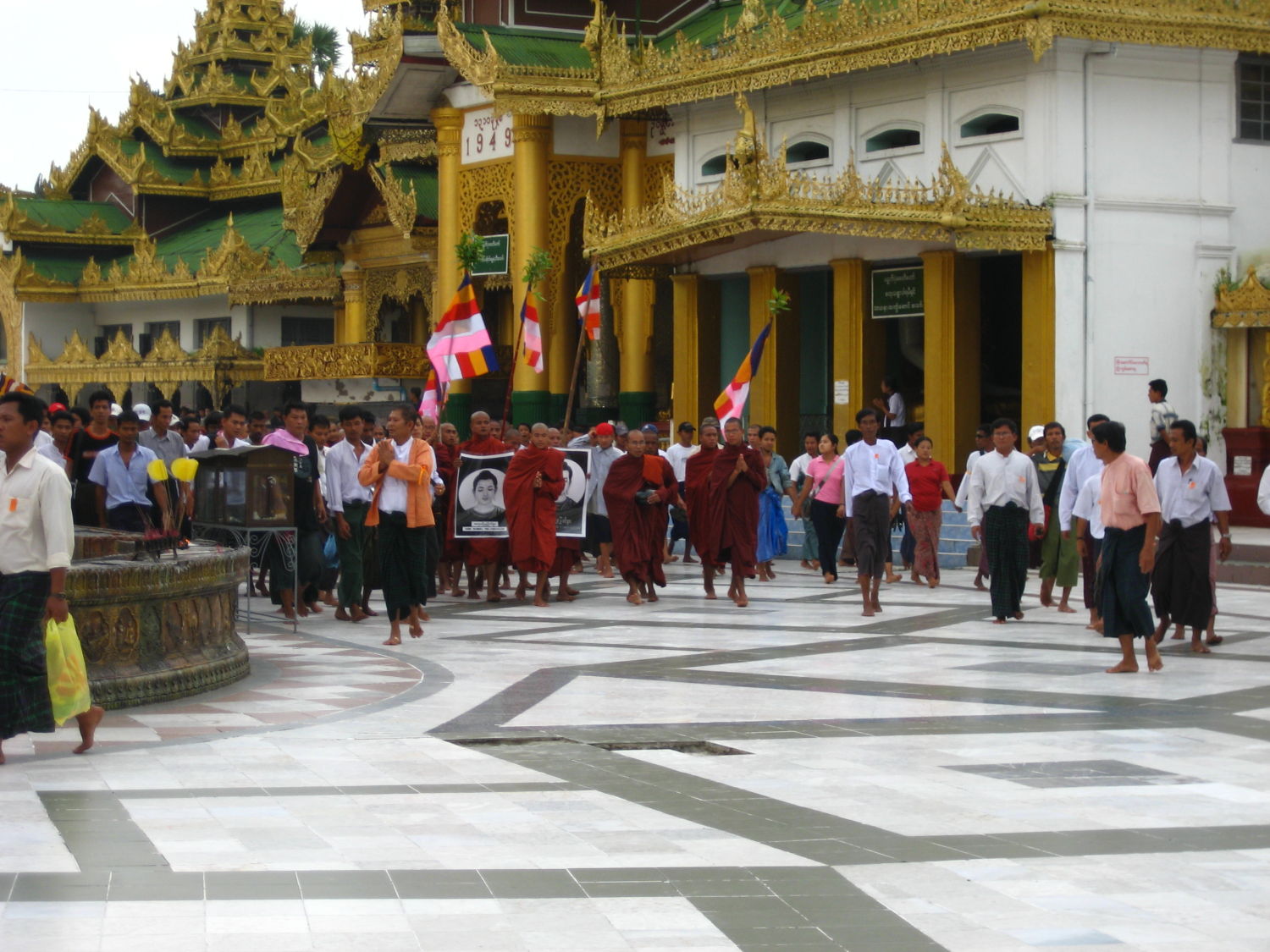 Even ten years on, the first mental image that comes to mind with regard to Theravāda Buddhism is that of Myanmar’s Saffron Revolution of August-September 2007: thousands of Buddhist monks peacefully demonstrating in the streets of Yangon, Mandalay, Pakokku, Sittwe and other towns against the ruling military junta. These peaceful monks still exist, although many of them went into hiding, or fled abroad. But the Burmese monks in the headlines today are preaching violence instead of peace, and “firm action” instead of meditation.

It’s not just in Myanmar that this militant Buddhism is on the rise: it’s also surfacing in the other two leading Theravādin countries: Sri Lanka and Thailand. In all three countries, Buddhists make up the vast majority of the population: 70% in Sri Lanka, 88% in Myanmar, and 93% in Thailand. One could be excused for thinking that there is nothing to worry about: with such towering demographic majorities, Buddhists are surely to some extent safe and secure in their respective countries.

This is not how the militant monks see things. They are convinced that Buddhism is under siege, and in grave danger of being wiped out. To explain this, they point out that while Muslims or Hindu Tamils (in the case of Sri Lanka) are in the minority in these countries, they enjoy significant support from beyond their national borders.

In Sri Lanka and Myanmar, the notion that a non-Buddhist minority is the vanguard of an imminent invasion is very strong indeed. It is believed that firm action has to be taken to prevent “them” from taking over Buddhist lands and eradicating Buddhism. Basically, the militant monks see their communities as targets of a relentless “holy war”, and see it as their duty, to respond in kind with their own variant of “holy war”.

The conviction that Buddhism is under threat also allows these leaders to justify the use of violence. Militant monks usually start their argumentation by pointing out that even the Buddha himself showed some understanding for the wars conducted by his benefactor King Pasenadi instead of condemning them. He did still warn him that “killing, you gain your killer, conquering, you gain the one who will conquer you” – the message being that violence begets violence. Even for the Buddha, then, nonviolence was not necessarily an absolute value – a point seized on by many of today’s militant monks. Although they readily concede that an offensive use of violence should never be allowed, they point out that peaceful and nonviolent Buddhist communities still have the right to defend themselves, especially if and when the survival of the religion as such is at stake.

This point of view is dated. As soon as Buddhist-majority states came into being, the monkhood had to find ways to justify violence, including war, especially that perpetrated by their virtuous sovereign against an opponent. Indeed it was by the monarch’s benevolence, and under the law and order he created, that the monastic order was able to survive. 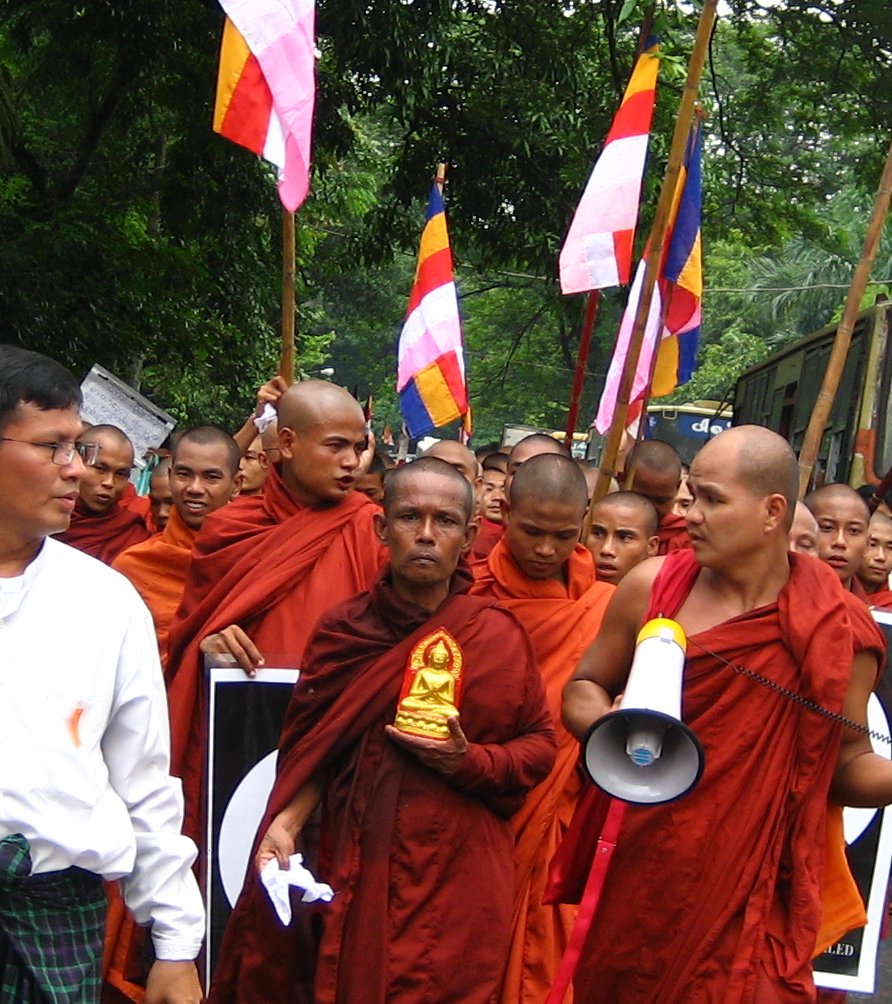 Militant monks are convinced that Buddhism is under siege, and in grave danger of being wiped out. Credit: Wikimedia Commons

An early example of such a justification comes from the Sinhalese Mahāvamsa (the Great Chronicle): After a battle against a Hindu-Tamil army, Buddhist King Dutugāmunu felt remorse for all the deaths he had caused, and asked senior monks for advice. They basically told him not to worry since he had caused the deaths of only one and a half persons – one who had just converted to Buddhism, and another who had been a Buddhist lay follower. All the rest had just been “unbelievers and men of evil life […], not more to be esteemed than beasts”.

This notable verdict implies that killing is excusable as long as the intention behind it is in the defence of the religion. Not surprisingly, this quote still is used to condone the use of violence – most recently by the Sitagu Sayadaw, an esteemed Burmese monastic leader, in order to justify the current persecution of perceived enemies of both state and religion – in this case, the Rohingya.

Sanctioning the violent actions of one’s ruler or one’s government is one thing; actively inciting lay-followers to commit such acts in defence of the religion is something completely different. Compared to “preachers of hate” from Abrahamic religions, today’s militant monks have a difficult tightrope to walk, since incitement to murder constitutes one of Buddhism’s four disrobing offences (pārājikas) – offences resulting in the automatic expulsion from the monkhood. In September for example, a Thai monk was forced to disrobe because he had publicly demanded that for each monk killed in Thailand’s deep south, a mosque should be torched.

Most militant monks are therefore very careful in avoiding open calls to violence – instead, they attend mass rallies and demonstrations to stoke anti-Muslim sentiments and to preach “passive resistance” or “pro-Buddhist affirmative action”: not buying from Muslims, not selling to Muslims, not fraternising with Muslims, not allowing one’s children to marry Muslims. They leave it to their followers, especially those organised in pro-state vigilante groups or Buddhist militias, to draw the right conclusions.

Although there is anecdotal evidence of armed monks actively taking part in violence, the majority of militant monks shy away from directly becoming involved: again, this would be a grave violation of the monastic code. Ashin Wirathu, a monk and leader of the Burmese anti-Muslim movement, describes this passive role very eloquently: “I am only warning people about Muslims. Consider it like if you had a dog, that would bark at strangers coming to your house – it is to warn you. I am like that dog. I bark.”

The rise of this strain of militant Theravāda Buddhism can be explained in ethnic, social and economic terms, but from the perspective of the militant monks themselves, it’s about religion. It’s not about the control of resources or worldly goods, but a defensive “holy war” or “Dhamma Yudhaya” in response to a perceived aggressive “jihad” against Buddhism that has been waged for centuries, from the destruction of the Buddhist library in Nalanda/Bihar at the end of the 12th century, to the destruction of the famous Bamiyan Buddhas in March 2001.

This somewhat simplistic reading of history, reminiscent of Samuel P. Huntington’s “clash of civilisations” thesis, reinforces the militant monks’ belief that now is the time not for peaceful meditation, but for firm action. The Buddha’s warning that violence begets violence seems to have fallen on deaf ears for the time being.

Peter Lehr is a Lecturer in Terrorism Studies at the University of St Andrews.