'Lawfare' Against Lula? Jail for Former President May Throw Brazil Into Chaos

As an appeals court upheld Lula’s conviction for corruption, throwing his candidacy for the presidency in doubt, international experts have expressed shock over the state of Brazilian democracy. Sao Paulo: The line dividing a vibrant democracy and a banana republic is rather thin, especially in South America. With a shameful history of countless coups, that line has been crossed several times in this part of the world. Brazil, in the eyes of many at home and abroad, seems to be on the verge of crossing that line all over again.

Wednesday was not an ordinary day in the history of this nascent democracy. On trial was not just one man’s fate but the future of democracy in this country. In a way, the verdict in the corruption case involving Brazil’s former president Lula da Silva was a foregone conclusion: for his opponents, he was guilty as sin; for his supporters, the trial was nothing but a farce, a political witch-hunt against a former president who had rocked the country’s elite and their backers in North America with his pro-poor policies and independent foreign policy during his eight years (2003-2010) as president. Lula, his supporters say, is being hunted as he is heading back to the presidential palace.

By Wednesday afternoon, with more than 100,000 Lula supporters  jamming the city centre in Porto Alegre, where an appeals court was hearing his plea against his conviction by a trial court in last July, the verdict was out. The three-judge bench not only upheld Lula’s conviction for corruption and money laundering, it also increased his sentence from 9.5 years to 12 years. Though Lula is not going to jail anytime soon, the judges have definitely thrown a spanner in his plans to run for a third term. Through the day on Wednesday, legal experts here were analysing if Lula is still eligible to stand in October’s presidential election and what further legal options are available to him.

Lula, who has been leading in all opinion polls for October’s presidential election, was defiant. “We will be back,” the Workers Party leader told a gathering of hundreds of thousands of supporters in Sao Paulo. With more than a million people out on the streets in his support across the country, there is little doubt that the most popular leader in Brazil’s history will not give up without a tough fight despite his conviction in the corruption case in a trial court and rejection of his appeal by a federal appeals court.

In July 2017, Lula was found guilty of receiving about US $755,000 in bribes from a construction company in the form of a seaside triplex apartment. Though the prosecutors alleged that the company paid nearly $28.42m in bribes for contracts at a state-run oil company Petrobras as part of a scandal that the Workers Party benefited from, nothing in the form of concrete evidence was produced against Lula. With the prosecutors and trial judge Sergio Moro openly talking against Lula in interviews and at other platforms, the defence became sceptical about a fair trial. In a strongly-worded statement on Wednesday, Lula’s lawyers Cristiano Zanin Martins and Valeska Teixeira said: “President Lula has been subjected to a political prosecution and conviction.  The verdict is not safe and is a miscarriage of justice and we will continue to fight this political conviction. One campaigning judge decided to investigate, prosecute and convict on no evidence. Today, three judges have chosen to ignore evidence of innocence and the rule of law. In doing so, they have triggered a crisis of confidence in the rule of law.” 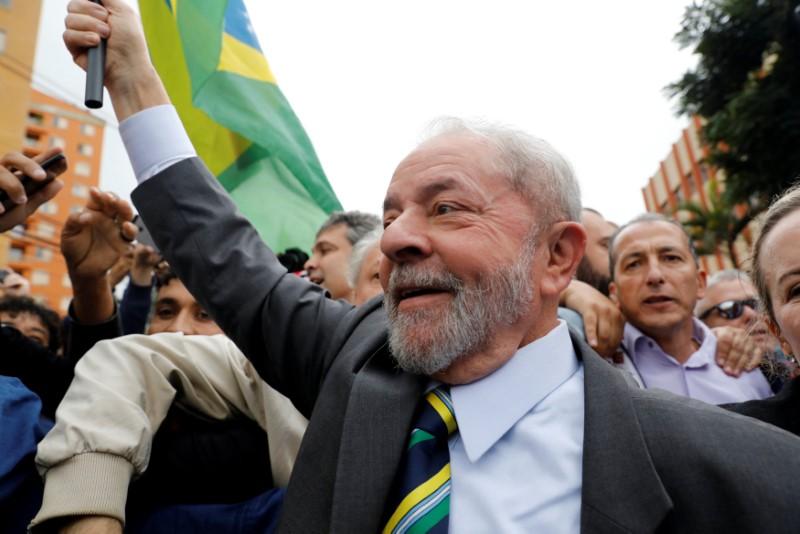 “Today’s verdict has a bigger consequence than just one man – this affects all Brazilians. The actions of the judiciary have damaged our country and shames Brazil within the international community. It is a sad day for those who defend democracy and the rule of law. We will continue to fight this political conviction. And we will win this fight, not just for Lula but for all Brazilians who believe that the rule of law and democracy must prevail,” the lawyers said in a statement.

Lula’s lawyers are not the only ones calling it a political trial. Geoffrey Roberston, a renowned British jurist who has worked with the United Nations, has strongly criticised the whole Brazilian judicial process, especially the role of trial judge Sergio Moro, whom he called a “campaigner and not a judge”.

In a hard-hitting interview, Roberston, who was in Brazil on Wednesday, questioned the appeals court chief’s decision to applaud the trial court verdict as “impeccable” even before he had read it. “What sort of banana republic is this? Brazil will become a joke if these judges are allowed to behave like this. That is my concern. Judges must be independent and impartial. And in this case, they are not,” Roberston, who is taking Lula’s case to the UN, told an independent journalists’ group.

Members of the Brazilian judiciary mostly come from the white, conservative and elite section that has traditionally been hostile to the Workers Party and Lula. Also, the lack of any jury system and a culture of forced plea deals give immense power to judges and prosecutors.

As Lula’s conviction was mostly based on statements – and not evidence – obtained in plea deals, many see it a political trial. In a letter to the Guardian this week, some of the world’s top intellectuals and activists called Lula a victim of “lawfare”.

“The speed with which his appeal came to court suggests that the Brazilian judiciary may have their eyes on candidate registration deadlines rather than law. Investigations in the original trial were unable to find evidence of any connections between fraudulent contracts signed by the state oil company, Petrobras, and Lula’s action. Yet he was convicted…There were several flaws in Lula’s trial such as lack of impartiality, being convicted on charges different from those presented by prosecutors and, more importantly, no evidence. That is also why we believe he is a victim of lawfare. The Brazilian judicial system is being used for political purposes,” said the letter signed by Susan Grey, Chris Williamson, MP, Alfredo Saad Filho and Francisco Dominguez among others.

The deadline for candidates to register themselves for the upcoming presidential election is August 15. According to Brazilian law, a person who is convicted by a court cannot run for office, but it also enables convicted candidates to appeal and potentially overturn their ineligibility. So theoretically, Lula has a little over six months take his appeal to the Supreme Court and get his name cleared. He also has the option of registering his candidacy without obtaining an injunction from a court.

With Lula’s supporters convinced that his trial is a sham, the Workers Party announced on Wednesday (soon after the verdict against him) that the former president will be their official candidate and he will continue to campaign.

Lula has been attracting people in hordes across the country, especially in the poorer states in northeast of the country. But with memories of the impeachment of President Dilma Rousseff on very flimsy grounds in 2016 still fresh in people’s mind, many Brazilians suspect that the “coup” that toppled Rousseff is still going on and may end up barring Lula from running for president in October.

Lula’s conviction on the basis of shaky evidence has made many suspicious about the future of democracy in a country that suffered a brutal dictatorship for 21 years (1964-85) before democracy was restored. This week, just ahead of the verdict by the appeals court, the well-known US public intellectual, Noam Chomsky, issued an appeal through video, asking for Lula to be allowed to contest the election. “With everything indicating that Lula is the most popular figure in Brazil and could possibly be elected in fair votes, it is at least appropriate that he be allowed to apply so that the Brazilian people can make their own judgment on Lula’s candidacy,” said Chomsky, adding that Lula is represents a major player in a battle to create a “world of justice and peace”.

If Lula fails in his appeals and is not allowed to register as a candidate, it may throw Brazil into chaos. With the government of Michel Temer, who became president after Rousseff’s impeachment, failing on all fronts, anger has been on the rise. Also the popularity of Lula, who led Brazil in its boom years, has spiked in recent months.

The possibility of Lula not being on the ballot has already created a movement on social media asking for the “boycott” of any election without Lula. In a country where voting in elections in mandatory and a candidate must poll more than 50% votes to get elected, a massive boycott of the elections may create a constitutional crisis. With Lula polling at 40% in the first round, according to opinion polls, there is little doubt he will win the presidential election if held today.

Come October and Lula may or may not finally win. But if he is denied the right to contest, it will put a big question mark on the Brazil’s hard-won democracy.

Shobhan Saxena is an independent journalist based in Sao Paulo.