In his oft-quoted August interaction, Blinken had stated that a Biden presidency would give “very high priority” to strengthening and deepening relationships with India." 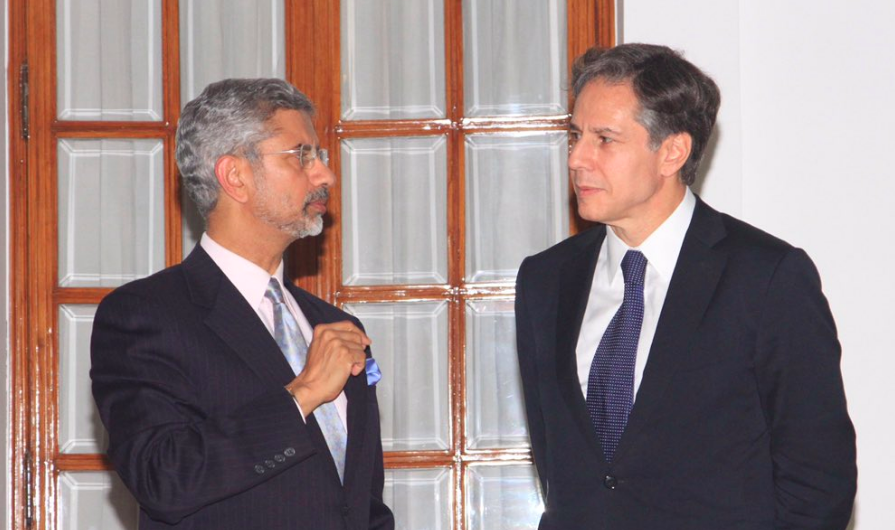 New Delhi: The next US Secretary of State Anthony Blinken is seen by South Block as a known quantity. A pragmatist who established credentials during his last State department term, he is expected to first look at putting a healing touch on treaty allies in Europe and Asia, before turning towards India and the rest of the world.

When Washington Post profiled Blinken in 2013, it described him as the US Capitol’s “consummate staffer”. For decades, he had remain in key, but lower profile posts, in Clinton and Obama administrations.

His senior thesis in Harvard University that was later published, was on how 1982 sanctions by Reagan administration stopped the construction of the Bratstvo pipeline by Soviet Union. This had also extended to a stop on European firms providing technology, and had harmed the western alliance, he had said.

The parallels to the current international scenario is striking – with Trump having lost no time in feuding with allies after becoming president in 2016.

Also read: What a Biden Administration Could Do – Or Not Do – for India’s Key Priorities

Indian officials point out that the clues to the priorities of the incoming administration – and Secretary of State Blinken – were in plain sight from the sequence of foreign congratulatory phone calls made by President-elect Biden.

He started with Canada, before moving across the Atlantic to Europe, then going on to treaty allies in Asia, before speaking with Israel and India. The Indian Prime Minister was likely the 12th to be called by the next US president.

He first became part of the White House team when he joined the National Security Council in the Clinton administration, and eventually became chief foreign policy speechwriter to Bill Clinton.

Blinken has been part of the rather unique American phenomenon of foreign policy professionals who have been in and out of the government systems with stints in the private sector.

He came into the Obama administration through Biden, having worked in his presidential campaign of 2008. In the first term, he was national security advisor to then Vice President Biden and moved up to deputy secretary of state in the last two years of the Obama presidency.

With the post of deputy secretary of state being equivalent to that of the Indian foreign secretary, Blinken had worked closely his counterpart in Delhi, who was then S. Jaishankar. Even when Jaishankar had been Indian ambassador to Washington, both of them would have moved in each other’s orbits. Now they are in top cabinet posts in their respective governments.

Glad to have Indian FS Jaishankar back in DC today to discuss regional security and global cooperation. pic.twitter.com/Poawb9G3Tg

When he had travelled to India in 2015, officials remember that Jaishankar had spoken highly of his counterpart to his colleagues as one of the “smartest US diplomats that he had met”.

Blinken was the foreign policy adviser to the Biden campaign – and crafted much of its platform. As The Wire had analysed after Joe Biden’s declaration of victory, the incoming Democratic administration will continue to follow through on the importance of the Indo-Pacific and provide a more predictable strategic environment around India.

In his oft-quoted August interaction with Hudson Institute, Blinken had stated that a Biden Presidency would give “very high priority” to strengthening and deepening relationship[s] with India.”

Indian officials told The Wire that the COVID-19 pandemic and the economic fallout is likely to “take out the oxygen” from the new Biden administration. But, when it eventually looks abroad, the initial “healing touch” would be towards Europe, they acknowledge.

At an online interview with US Global Leadership Coalition after the election victory, Blinken stated that the Biden administration would do “three big things” to put the “globe back into axis” – “leadership, cooperation and democracy”.

With the elite consensus in Washington, irrespective of ideology, having bracketed China as the villain, Indian officials do not see much impending change in policy direction – except in the tone and language. In fact, with relations with allies papered over, New Delhi expects any US action against China to be more effective. “European leaders like Germany Chancellor Angela Merkel have already indicated that they will be on the same page as US on China,” he said.

During a campaign outreach event to Indian-Americans earlier this year, Blinken had said that India had to be a partner in the new administration’s effort to rebalance engagement with China so that United States was occupying a “position of strength” in the relationship.

On both Iran and Afghanistan, India is expecting that there will not be an ‘all guns blazing’ approach, which had compromised Indian strategic space with both countries.

Especially in Afghanistan, Indian officials hope that Washington will not be as eager to cut down troops and turn a blind eye to the continuing violence. With the prevailing belief being that US President Donald Trump had been the solo driver for the drastic withdrawal of troops, the anticipation is that the new administration will largely follow the imperatives laid down in proposal put forward by Trump’s second national security advisor, General H.R. McMaster to bolster troop levels in Afghanistan.

There is also a similar optimism that the Biden administration will not push India to soften its stance on Pakistan. The sanguinity in South Block on that front stems from the fact that Blinken and his aides are veterans of the Obama administration, when relationship between US and Pakistan had reached its nadir. “They know Pakistan for a long time. There are no illusions about them,” observed a senior Indian government official.

With democracy being the third pillar of Biden’s foreign policy outreach, Blinken has said that it would be a key priority with many countries going through a “democratic recession”.

Indian officials, however, anticipate that the US administration will not do any public rebukes of the Indian government on human rights issues, as widely commented. “At the most, they may say something during a (closed door) meeting about some of the NGOs,” claimed sources.