Analysing the recent uprising by working-class Iran in the context of a battle for democracy which has spanned longer than a century. 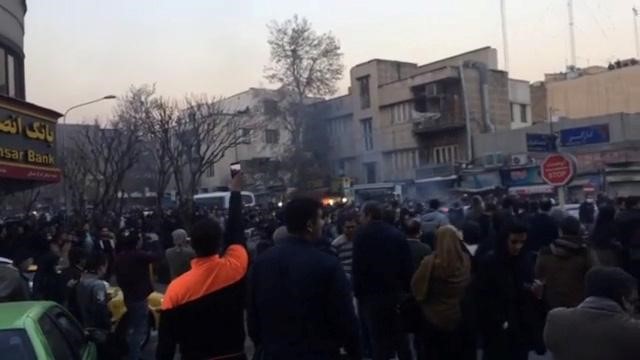 People protest in Tehran, Iran December 30, 2017 in this still image from a video obtained by Reuters.

The ongoing demonstrations in Iran, spreading like wildfire around the country and raising slogans that are totally different from those of the last uprising in 2009, have caught almost everyone by surprise.

What do they signify? What ignited them? And where are they heading?

Opinions diverge widely, depending on how much those who offer them support the current regime. But very few analyses attempt to understand the protests against the background of previous struggles for democracy. These protests represent a return to the agenda of a democratic revolution, which has been fought for and then defeated on at least three previous occasions by imperialist and right-wing counterrevolutions.

The Iranian struggle for democracy goes back more than a century. The 1905 revolution, which resulted in the Constitution of 1906 establishing a parliament (Majlis), was essentially against the absolute power of the monarchy as well as British and Russian imperialism. However the first Majlis was dissolved in 1908 after being attacked by the Shah (king), and the second Majlis of 1909 was dissolved in 1911 when Russian and British imperialism re-established control over the country. 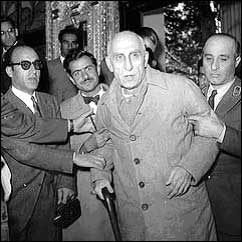 Mossadegh being tried for treason by a military tribunal in 1953. Credit: Wikipedia

The second democratic revolution occurred when Mohammad Mossadegh was elected prime minister in 1951 and established a secular, democratic government. Soon afterwards, he nationalised the oil industry, most of which was foreign-owned. In August 1953, the Central Intelligence Agency (CIA) and British MI6 orchestrated a coup that overthrew his government and inaugurated a brutal dictatorship by the Shah. This much is well known.

What is less well known is that the domestic agents of this coup were Islamists who were rabidly opposed to Mossadegh’s secular, democratic anti-imperialism, and that Ayatollah Khomeini approved of the coup.

The third attempt was the revolution of 1979. It is commonly described as an Islamic Revolution, but in fact was a broad-based democratic revolution. According to Fred Halliday, one of the world’s leading Middle East scholars, at the forefront of the uprising were writers, lawyers and opposition politicians demanding the restoration of civil and constitutional liberties; the bulk of the demonstrators consisted of the urban poor, although they were supported by merchants close to the clerical establishment. As Assef Bayat points out, a major contribution to the revolution was made by oil workers, critical to the Iranian economy and foreign exchange earnings. Their demands included ending martial law, the release of political prisoners, and nationalisation of the oil industry.

However, when Ruhollah Khomeini, who had been in exile during the Shah’s rule, returned on February 1, 1979, he began working for his version of an Islamic theocracy, the velayat-e faqih or rule of the jurist, and formed the Islamic Republican Party for this purpose. Despite his efforts, the period between February 1979 and June 1981 was still not, strictly speaking, Islamic rule, as Mansoor Hekmat argues:

“It was a period of relative open political activity, which the state was incapable of suppressing on a widespread scale, despite the existence of thugs and Islamicism… Political parties were flourishing; books of Marx and Lenin were sold everywhere; Communist organisations published papers; labour councils were established; various women’s organisations were formed and the wave of protests continued to escalate.”

“They attacked and executed 300 to 500 people a day in Evin prison and all over the country; they closed down newspapers and crushed the opposition… They poured onto the streets and arrested anyone who did not look like a Muslim… They arrested anyone who had recited a poem, who was known to be a Socialist or supporter of women’s rights, anyone who was not veiled and anyone who looked Left wing and executed them that same night… This was one of the greatest crimes of the 20th Century… They attacked, suppressed, killed and buried in unmarked graves, innumerable people.’

Initially, the Moscow-linked Tudeh Party was protected because its leaders had offered support to Khomeini on account of his anti-imperialist rhetoric, but from February 1983 onward, they too were butchered. This was, in other words, an Islamic counterrevolution.

In 1979, when the provisional government prepared a draft republican constitution and recommended a popularly-elected constitutional assembly to finalise it, Khomeini instead called on people to vote for an ‘Assembly of Experts’ drawn mainly from the clergy. This smaller body retained much of the original draft, but superimposed on it Khomeini’s vision of an Islamic state. 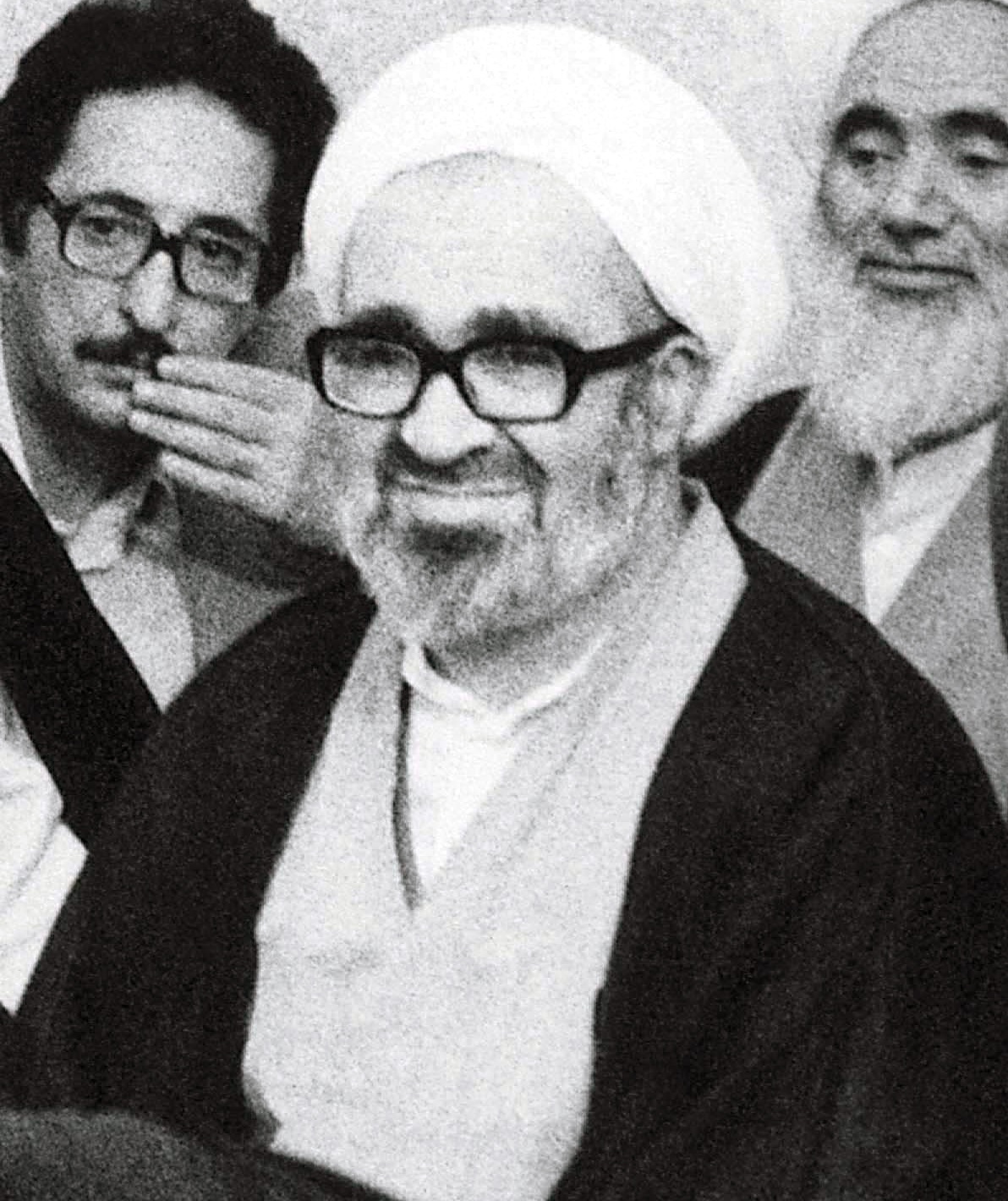 Khomeini meeting members of the Assembly of Experts on the constitution on July 24, 1979. Credit: Wikimedia Commons

Thus in the Constitution finalised by the Assembly of Experts, supreme authority is vested in a just and pious jurist (velayat-e faqih). His duties and powers include appointing jurists to the Guardian Council, the chief judges, the joint chief of staff and commanders of the army, navy and air force, the commander of the Islamic Revolutionary Guard Corps (IRGC), and the head of the radio and television network; and dismissing a president (Article 110). An elected president has a great deal of power, subordinate only to the Supreme Leader (Article 6). The constitution also allows for elections to the Islamic Consultative Assembly (parliament) by secret ballot (Article 62) and to the Assembly of Experts, which selects a new Supreme Leader when the old one dies; but nominations to all elected posts are subject to the approval of the (unelected) Guardian Council (Article 99).

This is thus a two-tier state, with an elected government (president and parliament) at the bottom, and an unelected regime (Supreme Leader, Guardian Council, judiciary, armed forces and IRGC) above it. The regime decides who may or may not be nominated to stand for election, and can overrule these elected representatives if they stray too far from the extreme right-wing agenda of the regime.

The Preamble makes it clear that:

“The Constitution provides the necessary basis for ensuring the continuation of the Revolution at home and abroad… Accordingly, the Army of the Islamic Republic of Iran and the Islamic Revolutionary Guards Corps are to be organised in conformity with this goal, and they will be responsible not only for guarding and preserving the frontiers of the country, but also for fulfilling the ideological mission of jihad in God’s way; that is, extending the sovereignty of God’s law throughout the world.”

Thus the goal of extending Iran’s theocracy to other countries receives constitutional sanction, and was evident from its early years. For example, in 1982–1984 it assisted Lebanese Islamists to form Hezbollah, and has channelled money and arms to it ever since. Also in 1982, the Iranian armed forces succeeded in liberating parts of Iran that had been occupied by Saddam Hussein after he invaded in 1980; according to Ephraim Karsh, the war could have ended then because Saddam was ready to accept a ceasefire. Instead, it carried on for six more years as Iran tried to conquer Iraq. On that occasion it failed but, ironically, the Bush-Blair invasion of Iraq in 2003 fulfilled Khomeini’s dream by overthrowing Saddam and handing over power to Iran-supported Islamists. A third example is Syria, where, in the words of Iranian, Syrian and Lebanese activists in the campaign group Naame Shaam, Iran progressed from being an ally of the regime to being an occupying force.

The spark that ignited the ongoing uprising 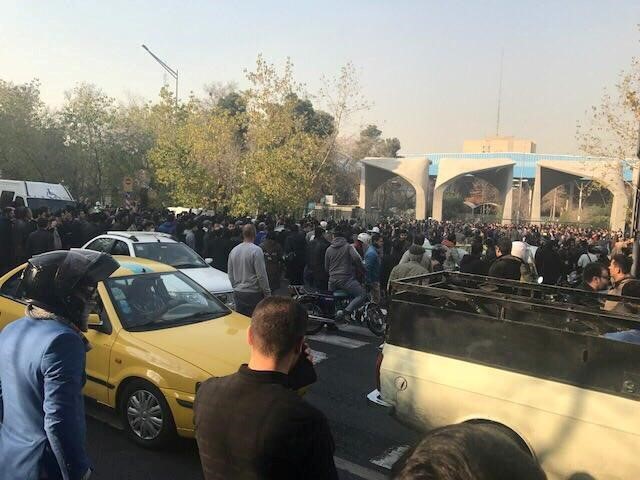 People protest near the university of Tehran on December 30, 2017, in this picture obtained from social media. Credit: Reuters

Politicians in Iran are commonly divided into far-right ‘principlists’, the Shiite equivalent of Sunni Salafis; conservative moderates like Hassan Rouhani; and reformists (who supported Rouhani in the last two elections). What unites them is their acceptance of the velayat-e faqih. This is why the huge Reformist-led Green Movement, launched in 2009 to protest against a rigged election, does not qualify as a democratic revolution, because it was, as Azadeh Moaveni put it, ‘challenging the Islamic system within its very confines’.

However, this does not rule out sharp differences between them. The right-wing clerics, including Ayatollah Khamenei, have accumulated vast quantities of wealth and property through their religious foundations; and the IRGC, which is allied to them, gained a stranglehold over the economy during Ahmadinejad’s presidency, including the extremely lucrative ‘black’ import business.

One can characterise them as a clerical-military bourgeoisie currently controlling Iran’s economy. Most of them opposed the nuclear deal, because they feared that the lifting of sanctions would open up Iran to the rest of the world both economically and politically. This puts them at odds with Rouhani, who has annoyed them further by suggesting that their imports of cheap Chinese goods are sabotaging Iranian industry, and with the government, which is asking why their massive incomes should not be taxed. They were not happy with the announcement that ‘bad hijabi’ women in Tehran would no longer be arrested, and the last straw was Rouhani’s speech to parliament on December 10, 2017, about his proposed budget bill, revealing for the first time the enormous handouts to clerical establishments and the IRGC that were previously kept hidden from the public.

Just days after Rouhani’s budget was announced, an IRGC-run TV channel was set up to broadcast criticisms of his economic policies, and on December 28 in Mashhad – the hometown of Ebrahim Raisi, Rouhani’s principlist rival in the presidential elections – demonstrations were launched calling for “Death to Rouhani!”

What these right-wingers had not reckoned with was the simmering anger of large segments of the population suffering from poverty, unemployment, inflation, fraudulent financial institutions that robbed investors of their savings and, on top of everything, threatened cuts in subsidies for the poor even while handouts to the rich increased. Their move backfired spectacularly. Predominantly young working-class protestors joined the demonstrations, which spread rapidly to 72 towns and cities in Iran; their slogans were far more radical: “Death to the dictator (Khamenei)! We have no jobs! Bread, shelter, freedom! Capitalist mullah, give us our money! Free political prisoners!”

There were slogans against the IRGC and Iran’s military interventions in neighbouring countries. The image of a bare-headed young woman standing on a box and waving her headscarf like a flag went viral, symbolising demands for women’s rights.

The regime responded swiftly, blocking access to Instagram and Telegram, arresting more than 2,000 people and launching attacks on the demonstrations; at least 22 people were killed, two of them in custody. Khamenei and the IRGC denounced the demonstrations as being orchestrated by Iran’s foreign enemies, even as Rouhani affirmed the right of people to protest peacefully. Huge counter-demonstrations were organised in support of the regime.

The demonstrations may decline in the face of the massive crackdown, but the grievances that exploded during the protests still remain. Efforts are on to articulate them more coherently and link them to demands, for example: slash handouts to the rich and restore subsidies to the poor; tax corporations, including IRGC ones, to fund a welfare state; end foreign military interventions and invest in an employment creation programme instead; free political prisoners; uphold the rights to freedom of expression, association and peaceful assembly; uphold workers’ rights, women’s rights, and the rights of ethnic, religious and sexual minorities; abolish the velayat-e faqih.

It would also be good if protesters against Iran’s wars would express solidarity with their victims, as Iranian students and activists have already done. Iran’s democratic revolution still has a way to go, but it will surely succeed.