At least four people died, including one woman who was shot by a police officer, and 52 were arrested amid the protests and rioting. 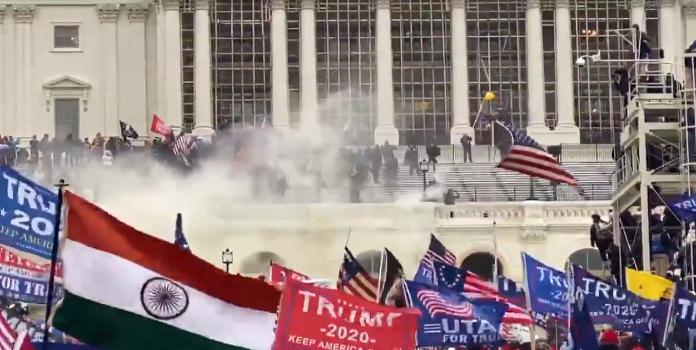 A screengrab from the viral video. Photo: Twitter@aletweetsnews

New Delhi: A viral social media post of an unidentified person waving an Indian flag among American flags during the US Capitol Hill clashes has enraged some twitter users including politicians, raising questions over its presence during the protests.

BJP Lok Sabha MP Varun Gandhi posted the video and questioned why the Indian flag was outside the Capitol building.

Why is there an Indian flag there??? This is one fight we definitely don’t need to participate in… pic.twitter.com/1dP2KtgHvf

Reacting to Varun Gandhi’s tweet, an Indian-American twitter user said that the number of NRIs supporting Trump is pretty huge and raised concerns over the overwhelming support by Indian-Americans for Trump.

This is either naive or disingenuous. The chunk of Modi loving NRIs who support Trump is pretty huge. I've heard of several bhakts who traveled to DC for this. This is your ideology. Own it. I am your age so I remember your Trumpish bloodthirsty inciting from the dais, Varun. https://t.co/mWY46RTNtq

According to most surveys, majority of Indian-Americans have always leaned towards the Democratic Party. There had, however, been anecdotal indication that certain sections among Indian-Americans were getting attracted to Trump over his term.

However, pre-election survey had shown that among Asian Americans, Indian community had the strongest support for Democratic candidate Joe Biden. According to data released in the 2020 Asian American Voter Survey last September, around 65% of Indian-Americans had said that they would vote for Biden. This was more than the overall percentage of 54% among Asian Americans.

Another pre-election survey by Carnegie Endowment had put an even higher number for Democratic support among Indian-Americans – 72% for Biden and just 22% for Trump. The report had analysed that US born Indian-Americans had a more pronounced tilt towards the Democratic Party compared to naturalised citizens.

Journalist Arun Venugopal, who covers race and immigration, posted a screenshot of a message shared by one of his sources, an Indian-American businessman, who participated in the protests.

Lest you think this was an all-white mob, there are Indian-American supporters of the president who took part — like my source Hemant, a businessman from Iselin, New Jersey. He sounded ecstatic about today’s events. pic.twitter.com/kQETsVzBNo

“Not the place where we’d like to see our Indian flag,” tweeted a user who was among the first to notice it, reported NDTV.

Not the place where we'd like to see our Indian flag 🙂🙂 https://t.co/Abtbth5j8K

“Every large crowd is not a cricket match,” advised comedian Vir Das to the flag bearer, in his post.

Dear random Indian dude waving Indian flag at the #CapitolRiots
Every large crowd IS NOT A CRICKET MATCH!

The US capital of Washington D.C. on Thursday (according to Indian Standard Time) saw unprecedented scenes of President Donald Trump’s supporters storming the Capitol to stop Congress from certifying President-elect Joe Biden’s election victory. At least four people died, including one woman who was shot by a police officer, and 52 were arrested amid the protests and rioting. Trump’s social media accounts were also subjected to temporary bans.

On Thursday morning, Prime Minister Narendra Modi had joined other world leaders in calling for a peaceful transition of power and described the storming of the Capitol as “unlawful protests”.