A friendly Saudi royalty can be ensured only via investment red carpets. The lack of it could lead to unsustainable diplomatic pressures and worrying noises on oil export to India. 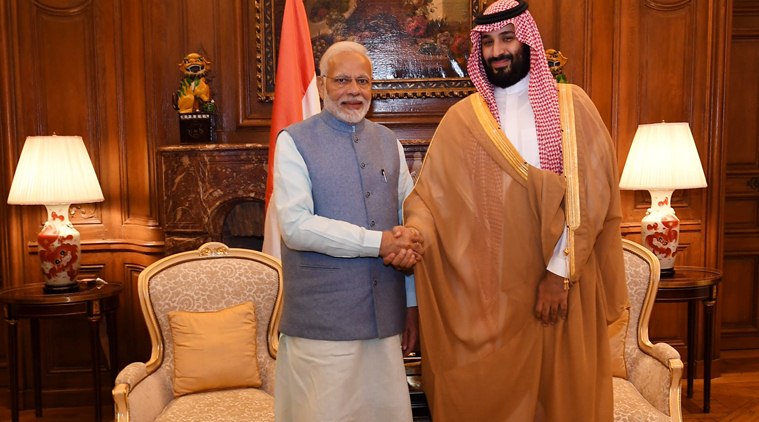 Tremendous strides have been made in India’s relations with the Kingdom of Saudi Arabia (KSA) in the past few years.

The relationship has indeed progressed “from a purely buyer-seller relationship” toward a “closer strategic partnership that will include Saudi investments in downstream oil and gas projects.”

However, the delay in welcoming Saudi money and recent events in India regarding Kashmir and CAA have made the relationship tenuous.

To get an idea of the already existing scale of the India-Saudi bilateral relations, let’s examine some facts and figures.

India imports 200,000 tons of LPG every month from the Kingdom. The 2.6 million (as of August 2019) strong Indian community in Saudi Arabia is the largest expatriate community in the Kingdom.

The Haj pilgrimage is another important component of bilateral relations. Nearly 7,00,000 Indians also visit the Kingdom to perform Hajj or Umra every year. The Hajj quota was increased by 24, 975 in 2019, enabling 2,00, 000 Indians performing Hajj in 2019.

This determines that until now the bilateral relationship has been defined by religious travel, migrant workers, remittances and oil trade. However, the scope to go above and beyond this towards more meaningful investment has been tapped by both the governments. In its largest ever push to bilateral relations, Saudi Arabia is believed to be looking to invest US $100 billion in India, in areas of energy, refining, petrochemicals, infrastructure, agriculture and mining.

Oil giant Saudi Aramco has two major investment plans in the country: strategic investment in the greenfield petroleum refinery in Maharashtra and a $15 billion worth 20% stake acquisition in the refining and petrochemicals business of Reliance Industries (RIL).

The proposed Maharashtra project is the largest greenfield refinery in India and will involve investments from Saudi Arabia’s Aramco, the United Arab Emirates’ ADNOC and Indian public-sector oil companies. Ratnagiri Refinery and Petrochemicals Ltd (RRPCL) which is implementing this project is a joint venture between the Indian Oil Corporation (IOCl), Bharat Petroleum Corporation (BPCL) and Hindustan Petroleum Corporation (HPCL). Saudi Arabian Oil Company – Saudi Aramco and the Abu Dhabi National Oil Company (ADNOC) are also partners for this project and own 50 % stake in the mammoth project.

Also read: Why It Was Wrong to Expect the Saudi Prince to Take India’s Cue on Pakistan

The 1.2 million barrels a day refinery and associated petrochemical project has been projected as one of the biggest projects in the country that will bring large foreign direct investment (FDI).

Recent reports indicate that the benchmark value has been raised from $44 billion to $70 billion for the project. This would require Indian PSUs to raise their investment from $22 billion to $35 billion, an increase of Rs 1 lakh crore, financing plans for which are not yet public, and are the object of much discussion, given the weakened cash flows of Indian PSUs and public finances.

Earlier the project was proposed to come up in Nanar village in Ratnagiri district some 400 kms South of Mumbai. Due to opposition from the locals the project was relocated to neighbouring Raigad, 100 km south of the financial capital. Of course, there would legitimate concerns of the locals, but it is beyond belief that an agreement of this scale was made without providing adequate assurances to the original owners of the land or making them partners in this huge investment.

Apart from land acquisition issues now there are reports that India is looking at cutting capacity at this oil refinery to match lower fuel demand projections and contain costs which jumped to $70 billion due to stringent environment norms and relocation of the site.

Supreme Court has mandated that you cannot sell petroleum coke and so to produce fuel without any such residue requires use of best in class technology and will cost more.

Also, the cost of land acquisition should have been calculated when plans of the project of such size were being made. The mega project was anticipated to be commissioned by 2022, however incessant delays have pushed the deadline to 2025.

India also needs Saudi support to build its planned emergency crude reserves as a buffer against volatility. India has at present 5.3 million tons of underground reserves in 3 locations Vizag, Mangalore and Padur which can meet about 10 days of the country’s oil needs.

New Delhi plans two new reserves with a combined capacity of 6.5 million tons enough to cover for an additional 12 days. Indian Strategic Petroleum Reserve Ltd (ISPRL) has signed an agreement with Aramco to lease part of the 2.5 million tone Padur storage in Karnataka.

Cooperation and investment from Saudi Arabia cannot be left to errors if India wants to achieve emergency crude reserves of its seven (another 6.5 mt facility at Padur in Karnataka, Chandikhole in Odisha, at Bikaner in Rajasthan and Rajkot in Gujarat) Strategic Petroleum Reserves facilities which would together hold about 128 million barrels of oil.

Riyadh has become more amenable to India’s concerns on radicalisation and terrorism. Cooperation in the fields of anti-piracy operations and CT has been an important part of India’s ties. The extradition agreement between the two countries has greatly aided the cause of India’s ﬁght against terrorism with Riyadh handing over individuals wanted in India.

Saudi Arabia has also been extremely obliging in its position on Kashmir, providing subtle support to GoI’s policy.

Closer relations with the custodian of the Muslim holy shrines assists in appeasing and validating the Indians government’s actions among sections of the Muslim community.

When the Saudi Crown Prince Md Bin Salman expressed understanding about India’s approach and actions in Jammu and Kashmir, it was a significant accomplishment for the Modi government and a definite snub to Pakistan.

However, the blowback over the vociferous criticism of India’s policies vis-à-vis CAA-NRC led by a bloc of Muslim countries (Pakistan, Malaysia and Turkey) will eventually affect India’s foreign relations with all the Gulf nations especially with the KSA.

Within the Organisation of Islamic Countries (OIC), the pressure is beginning to show on Saudi Arabia and UAE. It is only a matter of time before the Kingdom and self-professed leader of the Sunni Muslim world, succumbs to the negative propaganda by Pakistan wrapped around a Hindu-Muslim narrative, and withdraws its subtle support to India over Kashmir.

In fact, the negative repercussions have already come in the form of Saudi Arabia agreeing to convene a special Foreign Ministers’ meeting of the OIC devoted to Kashmir. Although this is being touted as quid pro quo to Islamabad for giving a pass to the Islamic Summit in Kuala Lumpur, the fact remains that this recompense to appease Pakistan is at the expense of India’s foreign policy interests.

Projected to become the world’s third largest economy Saudi Arabia is contemplating large scale investment in India. The fact that India has the world’s third largest Muslim population is certainly a consideration in Saudi Arabia’s Asian portfolio. Commencing work on the refinery would have opened the doors to Saudi investment in other sectors such as agriculture and infrastructure which PM Modi himself has touted as an “opportunity multiplier.”

However, with blisters in the very first trial it is doubtful that the Saudis would want to further scald themselves on purpose. In any case a slowdown in the economy as well as a shift towards EVs has affected fuel demand.

Aramco, which raised $25.6 billion by selling 1.5% shares in the world’s biggest initial public offering recently, has also been expected to participate in the proposed sale of public sector oil marketing and refining company BPCL. The participation of Aramco in the sale programme through the disinvestment of BPCL and other state assets is crucial for bridging the huge fiscal deficit that India faces currently.

The current India-Saudi relationship is a machine with multiple moving parts, many at the same time.

Saudi’s plans to invest in Ratnagiri or BPCL RIL appear to be options, of which only one will be exercised. Recent news of GoI approaching the Delhi high court to stall the investment in RIL, leaves only Ratnagiri and 8PCL as the two options.

Growing pressure from non-Wahabbi Muslim nations on Saudi Arabia with regard to Kashmir and CAA requires close monitoring by the MEA. If that support snaps, then UAE may follow and OIC , hither to quiet, may become belligerent.

A friendly Saudi royalty can be ensured only via investment red carpets. The lack of it could lead to unsustainable diplomatic pressures and worrying noises on oil export to India. The only relationship that will continue is of NRIs continuing to work in Saudi Arabia and remit nearly $10 billion per year.