"There has been an argument in Indian public opinion on the boundary question, which worries me," said Sun Wiedong. 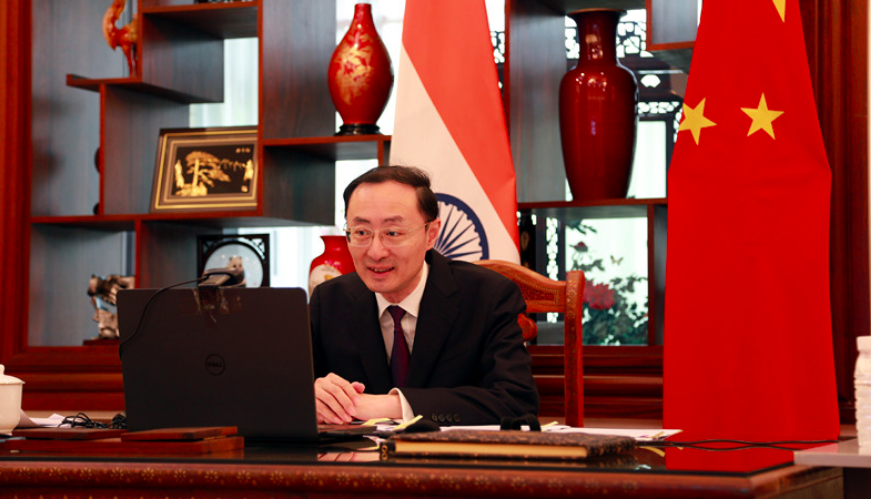 New Delhi: Even as he called for a “correct understanding” of both India’s and China’s strategic intentions, Chinese ambassador to India Sun Weidong said on Thursday that he was concerned about a call from quarters within India for New Delhi to change its ‘One China’ policy in order to pressurise Beijing.

The senior Chinese diplomat was speaking at a webinar organised by the Institute of Chinese Studies on the topic titled, ‘India China Relations: The Way Forward.’

In his opening remarks, Ambassador Sun indicated that he was aware of the debate generated by some opinion makers that India should have a stronger position on issues that put China on the mat, in the light of the ongoing stand-off at the border.

“There has been an argument in Indian public opinion on the boundary question, which worries me, suggesting the Indian government adjust its policy towards China, and change its stance on issues related to Taiwan, Xizang, Hong Kong and the South China Sea to put pressure on China,” he said. Xizang is the Chinese name for Tibet.

India’s ‘One-China’ policy does not recognise Taiwan and refers to Tibet as part of the Chinese government. New Delhi’s stance on South China Sea has not significantly changed, except that it is now being being articulated a bit more frequently. During the last session of the UN human rights council, India had for the first time asked for China to listen to concerns of various stakeholders on Hong Kong, where Beijing has promulgated a draconian Public Security law.

“I want to point out emphatically that Taiwan, Hong Kong, Xinjiang, and Xizang affairs are totally China’s internal affairs and bear on China’s sovereignty and security. While China doesn’t interfere in other country’s domestic affairs, it allows no external interference and never trades its core interests either,” said Ambassador Sun.

Following the Galwan valley clash, there have multiple rounds of diplomatic and military talks on implementing a plan for phase disengagement of troops. However, the process is still going on, with the Chinese ambassador making it clear that Beijing continues to assert its claim on Galwan.

“One fact is that China has never claimed any land outside its own territory. The label of “expansionist” cannot be pinned on China,” he said.

Later, he reiterated this point about the most problematic stand-off point at Pangong Tso lake, where China has intruded much deeper into Indian territory. “In the northern bank of Pangong Lake, China’s traditional customary boundary line is in accordance with the LAC.”

Earlier, ICS director Ashok Kanth had pointed out that there was “profound anxiety and even anger” in India over recent developments. The former Indian ambassador to China noted that there was “serious talk here that India-China relations are at a turning point”.

“Even experienced Indian diplomats who are deeply invested in this relationship are speaking of the need for a reset in ties,” he added.

In his remarks, Sun admitted that some scholars from Indian think tanks believe that Galwan valley clash “will be ‘turning point’ to change or even reverse China-India relations”. “Honestly speaking, I have different idea on this,” he stated.

He called on both sides to “correctly analyse and view view each other’s strategic intentions, and prevent misinterpretation and miscalculation in a positive, open and inclusive attitude”.

“When I see people wearing masks on the streets and doctors and nurses in protective suits, I really feel that the invisible virus, rather than China, is the “threat” facing India…It is undoubtedly short-sighted and harmful to deny the long history of peaceful co-existence between China and India and to portray our friendly neighbour for thousands of years as an “opponent” or a “strategic threat” due to temporary differences and difficulties”.

Sun said that the response to the challenges on the boundary should be a strengthening of dialogue and communication.

“Over the past decades, the two sides have managed differences through dialogue and negotiation, established various mechanisms such as the special representatives’ meeting on the boundary question, reached a series of agreements to maintain peace and tranquility in the border areas, and kept the channels of military and diplomatic communication open. These good practices must continue,” he stated.

The Chinese ambassador stated that Chinese and Indian economies are inter-woven, reeling off numbers to show that Indian industry is dependent on Chinese components. “Globalisation has deepened the interconnection between countries into the “capillaries”. Whether you want it or not, the trend is difficult to reverse”

He claimed that a “German friend working in India” told him recently due to India’s restrictions on import of Chinese auto components “the production of German automakers in India had been greatly affected”. The Chinese ambassador observed “forced decoupling of the Chinese and Indian economies is against the trend and will only lead to a ‘lose-lose’ outcome”.

“It fully demonstrates that self-protection, non-tariff barriers and restrictive measures violate market laws and WTO rules. It will only be harmful to oneself, to others as well as to the world”.

He pointed out that Indian government had announced it will provide favourable investment environment for foreign companies, “which should include Chinese companies”.

To a question on why China does not clarify the Line Of Actual Control with the exchange of maps, he indicated that Beijing is still not keen to restart this process, which halted in 2002.

“The purpose of clarification of LAC is to maintain peace and tranquility. When we look back into history, if one side has unilaterally put its own perception on the LAC during the negotiations, that will lead to disputes. That’s why, this process cannot be move on. I think that this is a departure of original purpose,” he stated.

Pending the final settlement, he said that main issue is for India and China to maintain peace and tranquility on the border areas in line with the 1993 and 1996 agreements and various confidence building measures.

“The important thing is that we must follow those agreement and continue our discussion and consultation along the diplomatic channels and also among corps commanders, also find out a way to de-escalate the situation and restore peace and tranquility,” he said.