They weren't demanding India change its laws but when 27 foreign missions in Delhi issue a statement reaffirming their countries’ "commitment to equal rights for lesbian, gay, bisexual, transgender and intersex citizens”, the message is clear. 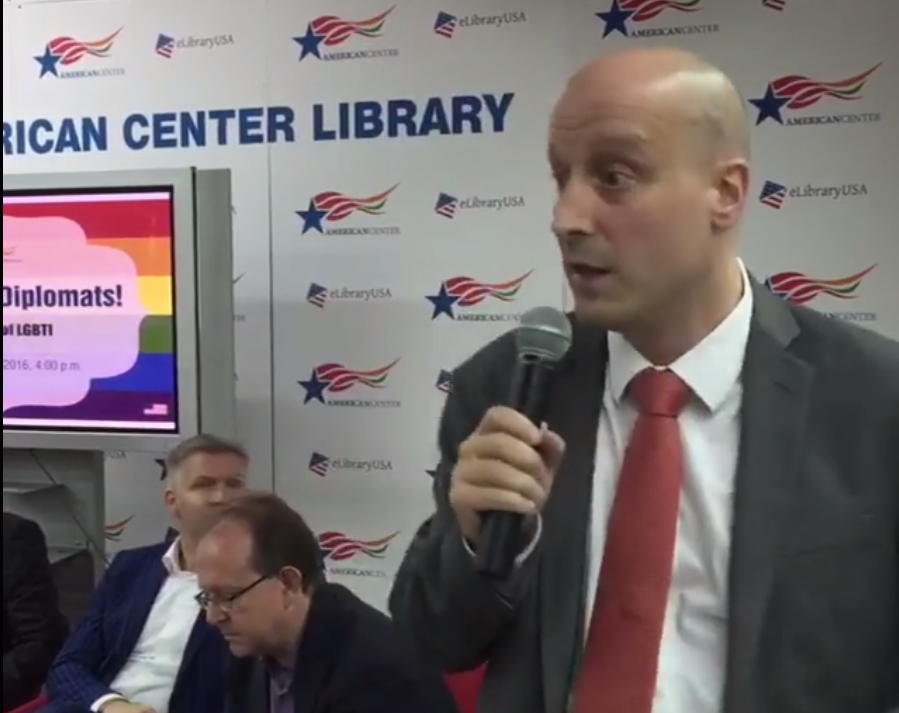 Alexander Evans of the British high commission speaking at the American Library in Delhi on Friday at an event on LGBTI rights. Credit: Facebook

New Delhi: How do diplomats advocate equal rights for the Lesbian, Gay, Bisexual, Trans and/or Intersex (LGBTI)  community in a country where homosexuality is a criminal act? Rather delicately.

On Friday evening, senior diplomats from eight countries sat down for a rather unusual ‘chat’ at the American Library in Delhi. It was not a tête-à-tête but a public event with a large audience sitting on every available chair placed along the length of the hall.

June is marked as ‘Gay and Lesbian pride month’ by the United States government to commemorate the Stonewall riots – with US embassies around the world organising special events on LGBTI equality. The US embassy in Delhi has been similarly busy, but this year the intensity has been notched up a bit with the other diplomatic missions joining in for the first time.

In tandem with US embassy, 27 other foreign missions in Delhi – all Western or Latin American with Japan the only Asian nation among them – also issued a joint statement on Friday to “reaffirm our countries’ commitment to equal rights for lesbian, gay, bisexual, transgender and intersex (LGBTI) citizens”, with an ‘annexe’ of important milestones in legal rights for the community in various countries.

The statement, just like most of the two-hour discussion on Friday, did not directly mention India’s controversial Section 377 which criminalises homosexual love – but the context is clear. Both the written statement and the conversation made it a point to acknowledge that India has been more progressive on the rights of the transgender community.

The killing of 50 people at a gay nightclub in Orlando also hung heavily on everybody’s mind at the discussion, which which was attended by senior diplomats from the embassies concerned.

The US embassy’s deputy chief of mission, Michael Pelletier, said that preparations for the ‘chat with diplomats’ on LGBTI rights had been in the planning for weeks, but the tragedy in Orlando starkly brought to the fore the need for such an event.

“As Canadians, we were outraged. It was an attack on all of us,” said Canada’s deputy high commissioner, Jess Dutton. He commended the US embassy for its “leadership in the last month” in organising LGBTI events, which he stressed was “very, very important in a country like India”.

Thibault Devanlay, the EU delegation’s political counsellor, used his personal example of having received institutional backing for harassment by a superior over his orientation as how the “practice” of equal laws can play out.

When asked if foreign governments had a regular dialogue with New Delhi on LGBT rights, Devanlay admitted candidly that it wasn’t easy. “I won’t hide the fact that this is difficult with the Indian government,” he said.

The EU has a human rights dialogue with India, but this is not the top-most item on the agenda. “I would not say that LGBT (issues) are prominent in the dialogue, but it is increasing,” he said.

Of course, he added, New Delhi also ensures that the dialogue is ‘balanced’. “It is not just us finger-pointing. The finger points to us easily too. There are valid questions that India raises with us also”. Devanlay didn’t mention India’s complaint to EU during the public event – but it is public knowledge that New Delhi has not been happy with European immigration policies.

An interlocutor at the annual India-EU human rights dialogue had described it as “to tell India that we know and for the Indians to signal that they know, we know”. Incidentally, India only has a separate bilateral channel on human rights with EU.

Just like Norway, the EU diplomat said that he had “instructions” to hold events on May 17, the International Day against Homophobia, Biphobia and Transphobia. “We also have instructions wherever possible to raise the rainbow flag,” he added. But, this last one has not happened  yet in Delhi. The roadblock, though in a typical EU way, is due to certain technical guidelines which require taking into account how many other member states are also waving the flag.

He noted that earlier diplomatic events relating to gay rights used to take place “in a small room in the embassy”, but now it is “more and more public”.

He also added that there  should not be undue expectations from foreign capitals to fuel the change, as the heavy lifting will have to be done by Indian civil society.

“We need to have pressure from Indian society… From inside… From elected officials,” said Devalany. Foreign diplomats do have contacts with civil society and Indian MPs, but it is mainly to understand the situation, he noted.

Pelletier was similarly careful about choosing his words, when a question was asked by an audience member on whether there was “any ray of hope” for the Indian LGBTI community.

“The many examples have shown us that every country advances at its own pace and own time. For change to be long-lasting, resilient, it has to come from within society. One of your huge strengths is free speech, civil society. I am sure that there will be enough debate about this,” said the US diplomat.

Citing the example of the UK foreign service,  British deputy high commissioner Alexander Evans noted that “significant legal and cultural change can happen in a lifetime”.

He pointed out that the guidance for LGBT diplomats was only changed fully just 12 years ago. “Now there are many openly gay UK ambassadors. Even in the case of a small country, we had a fully gay mission. It was not due to social engineering or the UK trying to make a point. But that they were the right persons for the job. They were appointed sequentially and then it turned out to be a fully gay mission,” said Evans.

In India, postings for foreign diplomatic same-sex couples poses complexities at the time of visa application. “There are no rules, so it is very ad-hoc. The only thing that we have seen is that it depends on the state of bilateral relations,” a diplomat from a western country told The Wire. So, in the case of Italy and Denmark in Europe, with whom there have been tensions in the past, denying visas for diplomatic same-sex spouses was another way to express India’s unhappiness, he noted.

During the 2013 Devyani Khobragade  controversy, in which the US arrested and strip-searched an Indian diplomat, senior BJP leader and former foreign minister Yashwant Sinha had demanded that the government arrest same-sex companions of US diplomats in India for violating Section 377 of the Indian Penal Code.

There are several same-sex diplomatic couples posted in Delhi. “I have not heard that they have faced many problems working here. But, then we in the diplomatic community live in our own bubble,” said another European diplomat.

If the diplomat’s partner is given a spouse visa, it eases living in India. “When they go to the bank, they hardly can make out if the other spouse is male or female. That is not a problem. The issue becomes a bit of a problem if the partner is given a ‘dependent’ visa, which is a different category with different privileges,” he said.

At Friday’s event, several diplomats provided accounts of how homosexuality was decriminalised in their own country to an attentive audience – but kept firmly away from commenting directly on the Indian situation.

Swedish deputy envoy Daniel Wolvén mentioned that the church had a leading role in improving the rights for gays by approving matrimony.

German embassy’s Björn Grözinger said that he was wearing two hats – one as a German diplomat, another as a representative of the LGBT community.

Noting that the German criminal code listed homosexual acts as a crime till 1994, Grözinger pointed out that there had been a strong public debate over gay rights since the 1970s. “1986 was another milestone, when the first gay kiss was broadcast in a German soap opera. Maybe in the discussion later on, we can talk of when the first gay kiss in Bollywood will happen,” he said.

Spain under the long Franco dictatorship had also criminalised homosexuality (though homosexulaity was decriminalised in the 19th century) with the law changing finally in 1979. While the legal situation had vastly improved, there are still lingering issues. The Spanish embassy’s political counsellor, Beatriz Lorenzo noted that bullying in schools was a serious concern.

Dutton noted that it was the current Canadian prime minister, Justin Trudeau’s father, Pierre Trudeau who had decriminalised same-sex sexual acts in 1969 as justice minister.

But since the discussion was being held in India, the legal reality of the country was the elephant in the room. Summing up the discussion, Pelletier noted that this was “perhaps the best way” to hold such events related to LGBTI rights. “Instead of hectoring… we are only sharing the progress made in our own countries”.