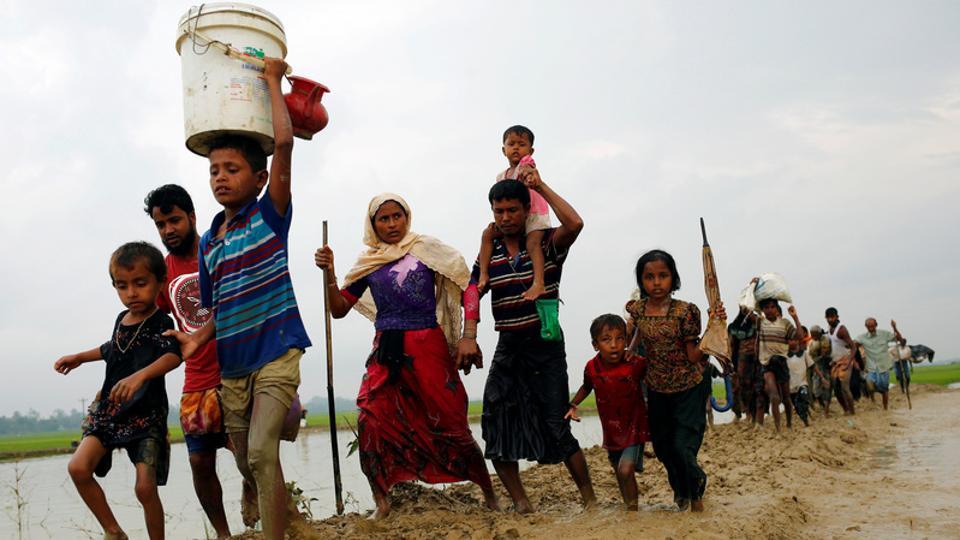 New Delhi: Hindus from Myanmar have joined streams of Muslim Rohingyas to seek refuge in Bangladesh after the killing of 86 people from their community in ethnic violence in their own country.

“In a Hindu village a mile north-west of Kutupalong, Hindu Rohingya from Rakhine are sheltering having also fled there through the mountains,” reported the Observer.

UN officials estimate some 90,000 people have fled to Bangladesh from Myanmar in the past ten days and thousands more were trapped on borders without basic food and medicines.

“A total of 414 Hindus from (Myanmar’s) Rakhine state took refuge at a Hindu village in Cox’s Bazar,” a Bangladeshi official told PTI on condition of anonymity.

However, Bangladesh Hindu-Buddhist-Christian Unity Council President Rana Dasgupta, who visited the village, said the figure of Hindu refugees was 510 while the Observer counted about 200 people, mostly women, children and the elderly, crammed into a wooden barn.

“According to the Hindu refugees, unidentified masked people in black attires attacked their homes killing 86 people on August 27 and 28 at different places in Myanmars Mangdu district,” he said.

“The attack on Myanmar Hindus should be investigated to bring the perpetrators to justice,” he added.

According to the latest official census in Myanmar, Hindus constitute 0.5% of the country’s population while Muslims constitute about 4.3%.

The latest spate of violence erupted in Rakhine state on August 25 after alleged Rohingya insurgents attacked several police posts, triggering a counter-offensive by the military that resulted in the death of at least 400 people.

Rakhine, the poorest region in Myanmar, is home to more than a million Rohingya. They have faced decades of persecution in the Buddhist-majority country, where they are not considered citizens.

Soldiers and armed residents have been accused of carrying out a killing spree against Rohingya Muslim men, women, and children.

Reports said Myanmar blocked all UN aid agencies from delivering vital supplies of food, water and medicine to thousands of desperate civilians at the centre of the bloody military campaign in Myanmar.

Dhaka had urged Myanmar to take steps to protect innocent civilians to prevent the mass exodus and then proposed a joint security clampdown.

Bangladesh also alleged that Myanmar military helicopters violated its airspace repeatedly on August 27, 28 and September 1, prompting its air force and navy to intensify their security alertness.

“These instances of incursion into Bangladesh air space by Myanmar helicopters run contrary to the good neighbourly relations and could lead to unwarranted situation,” Bangladesh foreign office said in a statement two days ago.