Hafiz Saeed's Arrest is Good News, But Pakistan Faces a Tough Road Ahead

Pakistan may be trying to rectify its past mistakes and improve its international image but it won't be easy undoing the support Hafiz Saeed's Jamaat-ud-Dawa has built by aiding citizens in need whom the government has failed.

Hafiz Saeed, chief of the Jamat-ud-Dawa, speaks with the media before being put under house arrest in Lahore, Pakistan. Credit: Reuters 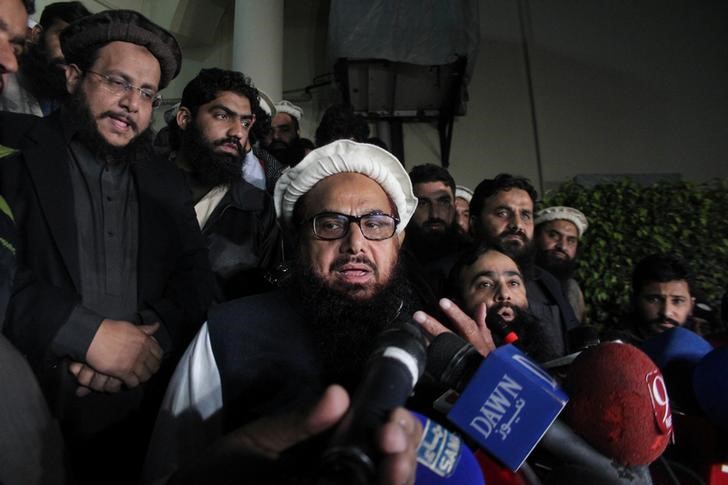 Hafiz Saeed, chief of the Jamat-ud-Dawa, speaks with the media before being put under house arrest in Lahore, Pakistan. Credit: Reuters

Lahore: I woke up last Monday morning to learn that the infamous Hafiz Saeed had been put under house arrest by the Pakistani state. Saeed, the leader of Jamaat-ud-Dawa (JuD) – which is popularly understood to be the whitewashed version of Lashkar-e-Tayyaba (LeT), responsible for the 2008 Mumbai attacks and other violent acts in India – has been long declared a terrorist by India and the United Nations. In Pakistan, however, Saeed has been roaming freely, organising rallies, fundraising for his campaigns and offering boisterous speeches as guest of honour at various public platforms. Both the Supreme Court and the Lahore high court have previously stated that they do not have enough evidence against Saeed to charge him; he should hence be treated as any other citizen of Pakistan: free to do as he wills, wherever he wills.

In 2016, Saeed used the killing of the Kashmiri militant Burhan Wani to once again present himself as a focal stakeholder in the Kashmir conflict, trying to hijack the spontaneous protests in the Valley as something inspired by him and his lashkars. He and his party workers held a series of rallies across Pakistan and Pakistan-administered Kashmir, chanting anti-India slogans. He encouraged his workers to set up relief camps to “collect donations for Kashmiri brothers and sisters oppressed by the repressive Indian regime”. It was declared that JuD would buy food and medicines from the donations and send them across the LoC. The question of how they would channel the aid to the other side went unasked and unanswered.

This was not the first time that Saeed and his colleagues had used the pretext of relief to raise funds. As Pakistan joined hands with the West in the war on terror in the months following 9/11, the establishment began to crack down on militant outfits operating in the country. Many armed groups in Kashmir bore the brunt of the shifting policies of the Islamic Republic. Increasingly, at the turn of the century, the space for overt militancy was shrinking. Pressure from the US government, coupled with political instability, sectarian conflict and the proliferation of terrorist groups targeting Pakistani cities and towns, meant that a change in strategy was essential not only for Pakistan but also for groups like the LeT, if they were to survive.

The 2005 earthquake created the perfect opportunity for these organisations to rebrand themselves as relief agencies and continue their operations under the garb of ‘welfare’. The earthquake – in which over 75,000 people were killed, most of whom were on the Pakistani side of the LoC in Jammu and Kashmir – wreaked havoc in the country. While international and local donations poured in and the state stepped up its relief efforts, it was JuD that surfaced as the focal humanitarian agency in the Valley. JuD’s outreach and efforts were unmatched; they provided medics, emergency treatment, ambulances, mobile X-ray machines and kitchens. They were everywhere the government wasn’t. Inevitably, thousands of Kashmiris began to see them as the most effective philanthropic network in the region. One Kashmiri told me, “They were there when the government wasn’t. They are always there for us. Where would we be without them?” 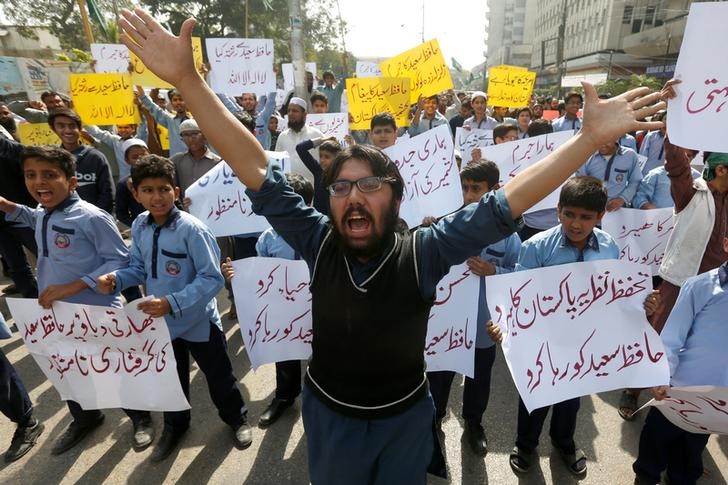 Student supporters of Jamaat-ud-Dawa carry signs and chant slogans to condemn the house arrest of Hafiz Saeed during a protest demonstration in Karachi, Pakistan. Credit: Reuters

When another earthquake struck Pakistan in October 2015, JuD was at the forefront of relief work again. According to Dawn, three hours after the 2015 earthquake, a single Lahore-based JuD worker had already raised 1,000,000 Pakistani rupees (approximately $10,000) for relief supplies. For ordinary civilians and recipients of aid, such organisations have become the face of rescue operations. They are their only hope amidst disaster. For militant-linked organisations, such natural catastrophes can provide the perfect opportunity to cash in on the grievances of locals. Relief camps become breeding ground to regroup volunteers and raise funds for militancy both in and out of Kashmir.

With Pakistan’s civilian government taking action against Saeed, newspapers are full of speculation regarding what prompted the state to arrest him. Some claim that Pakistan is under pressure from the Trump establishment in the US. With citizens of seven Muslim countries banned from entering the United States, in an order that has now been temporarily reversed by a US federal court, Pakistan may fear it could be next on the list. Others assert that the pressure has come from China. As the economic giant invests in the China Pakistan Economic Coordinator (CPEC), it cannot afford to risk the possibility that terrorist acts in the region could prompt wider instability. It is their hope, the argument goes, that arresting Saeed will pacify the Narendra Modi government in India for the time being.

Whether the arrest comes in the wake of external pressure or internal insight, Saeed’s detention is a positive move. What is perhaps ironic then is the reaction from some segments of the Pakistani population. US and Indian flags have been burnt in various cities of Pakistan and Pakistan-administered Kashmir; JuD workers and their supporters are denouncing the government, abusing them for listening to ‘enemy’ states and taking action against a so-called pious and righteous welfare worker. They claim that he is the true representative of Kashmiris. But it is not only JuD workers who seem to be protesting the arrest. Popular Pakistani actor and self-proclaimed political commentator Hamza Abbasi also came out in support of Saeed on social media, with thousands liking his post about Saeed’s ‘high character’. Meanwhile there are media reports of Hindus from Tharparkar, Sindh, also having joined in the protest. They say that while Saeed may be a terrorist for Americans and Indians, he is a philanthropist for the community. Saeed and his men have led relief efforts in the poverty-stricken district of Thar, where a significant Hindu population resides.

How significant or deeply felt these expressions of solidarity are remains to be seen. What is clear, however, is that Saeed’s party has been effective in usurping the vacuum left by the state, meeting citizens’ needs where the government has been both unable and unwilling to do so. While the Pakistani state seems to be trying to rectify its mistakes and curb such actors in order to improve its international status, it does not help that the frustrated and deprived citizens of Pakistan have started to find relief in the very elements responsible for creating havoc and instability in the country in the first place. Countering the influence of Saeed will require not just state action against all manifestations of militancy, including those who target India, but also the augmenting of the Pakistani state’s capacity to provide proper services to citizens.