Once the Guatemala's Congress approves, the emergency measures will be in effect for 30 days, allowing the army to increase the number of soldiers fighting. 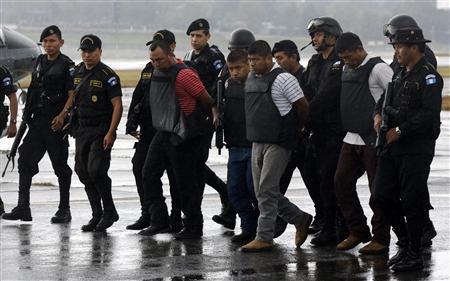 The drug trafficking trade has plunged the Guatemala into a spiral of violence waged by cartels and criminal gangs. Credit: Reuters/Daniel LeClair

Guatemala City: Guatemala‘s government has declared a state of emergency in two municipalities bordering Mexico, and will send troops to fight drug-trafficking groups that have proliferated in the region.

Residents of the Ixchiguan and Tajumulco municipalities in the department of San Marcos have been living in fear due to a bloody conflict among criminal gangs backed by Mexican cartels to control drug-trafficking routes, the Interior Ministry said.

“The situation there is critical. Last night there was a battle between two criminal groups and they attacked each other with rifles and grenades,” said army spokesman William Garcia.

Guatemala‘s Congress has three days to approve the emergency measures, which were announced on Thursday. Once approved the measures will be in effect for 30 days, allowing the army to triple the number of soldiers fighting the criminal gangs to 450.

“There are signs Mexican citizens are participating. Poppy is produced, harvested and cultivated here … it is [then] transported to Mexico where it is processed and then sent to the United States,” said Guatemala‘s interior minister Francisco Rivas.

Guatemalan police have faced heavy gunfire and have been unable to enter the conflict area and children have been kept home from school, the ministry said.

In Mexico, the military is fighting against surging heroin production, much of which feeds demand in the United States. The rise of smaller gangs disputing lawless areas planted with ever-stronger poppy strains has also complicated their efforts.

Some see a direct link between a US heroin epidemic, that killed nearly 13,000 people in 2015, and the drug-related violence which has engulfed large swaths of Mexico.

Guatemala, much like its central American neighbours Honduras and El Salvador, serves as a key transit point for traffickers shipping illegal drugs from South America to the United States. The trade has plunged the region into a spiral of violence waged by cartels and criminal gangs.