'No Troops Missing' Says India, No Denial Yet of Reports of Capture and Return of Soldiers

Meanwhile, the discussion on whether the soldiers who clashed with Chinese troops were armed took a political turn with external affairs minister S. Jaishankar taking on Congress leader Rahul Gandhi. 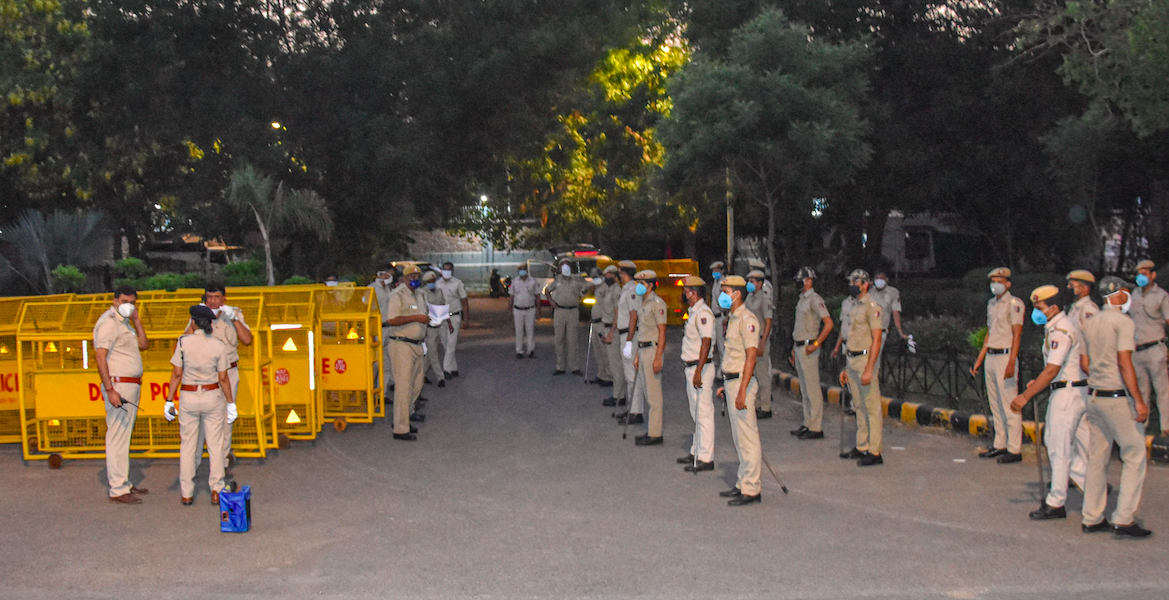 Security outside the Chinese embassy in Delhi. Photo: PTI

New Delhi: In the face of unconfirmed media reports of some Indian soldiers having been taken captive in the aftermath of the June 15 violent face-off with Chinese soldiers at the Galwan valley in Ladakh, the Indian government said on Thursday that “there are no Indian troops missing in action” and that the two sides are in discussions to activate an institutional mechanism on closing gaps in communication at the border.

The Indian clarification – first from the Indian Army and then the Ministry of External Affairs – was carefully worded, the use of present tense and the assertion that none are “missing in action” leaving open the possibility that some soldiers had been taken prisoner prior to being released.

Indeed, The Hindu has quoted an unidentified “security source” as saying a total of 10 soldiers “including  a lieutenant colonel and three majors” had been in Chinese custody since the clash on the night May 15/16 and were all released around 5 pm on Thursday following an agreement reached by both armies in their de-escalation talks on Wednesday evening.

Twenty Indian soldiers were killed during the clash in the upper reaches of Galwan valley, when Indian troops had gone to inspect the de-escalation process agreed upon by the two sides.

According to various media reports, the Chinese came armed with clubs spiked with nails, beat the Indian soldiers and pushed them to their death into the raging waters of the Galwan river. Besides the 20 dead, 76 soldiers were injured, with 18 said to have received serious injuries.

Also on Thursday, external affairs minister S. Jaishankar waded into the political battlefield with the opposition Congress leader Rahul Gandhi over the protocol followed by Indian soldiers during their encounter with the Chinese troops.

Rahul Gandhi posted a tweet with the video interview of a former senior army officer – Lt Gen H.S. Panag – questioning why Indian soldiers did not carry arms while meeting with the Chinese at the border.

“How dare China kill our unarmed soldiers? Why were our soldiers sent unarmed to martyrdom?” tweeted Gandhi.

Jaishankar replied to him on Twitter that the Indian troops at Galwan on June 15 were carrying arms, but were restrained by the rules of engagement that have been drawn up based on bilateral border agreements.

Let us get the facts straight.

All troops on border duty always carry arms, especially when leaving post. Those at Galwan on 15 June did so. Long-standing practice (as per 1996 & 2005 agreements) not to use firearms during faceoffs. https://t.co/VrAq0LmADp

Jaishankar was referring to clauses in the agreements which curb the use of firepower within two kilometres of the Line of Actual Control.

During the foreign ministry briefing in Beijing on Thursday, spokesperson Zhao Lijian dodged a question on the reports of Chinese soldiers carrying spiked rods and reiterated the narrative that Indian soldiers had crossed the Line of Actual Control.

In New Delhi, the MEA spokesperson repeated India’s accusation made the day earlier that China had taken “premeditated and planned action that was directly responsible for the resulting violence and casualties suffered by both sides”.

He added that given India’s “responsible approach to border management”, all Indian activities “are always within the Indian side of the LAC”. “We expect the Chinese side to also confine its activities to its side of the LAC,” said Srivastava.

After the violent clash, the Chinese government had claimed that the entire Galwan valley was their territory – a public assertion that came as a surprise to the Indian side. The Indian government refuted the claim, noting that such a an “exaggerated and untenable” territorial declaration was contrary to the understanding reached by the two sides on June 6.

The MEA spokesperson said that the Indian external affairs minister had told his Chinese counterpart Wang Yi on Wednesday that “the need of the hour was for the Chinese side to reassess its actions and take corrective steps”.

“They should strictly respect and observe the Line of Actual Control and not take any unilateral action to alter it. It was agreed that both sides would implement the dis-engagement understanding of 6th June sincerely.  Neither side would take any action to escalate matters and instead, ensure peace and tranquillity as per bilateral agreements and protocols,” the MEA spokesperson told reporters.

He added that New Delhi was convinced of the need to maintain peace and tranquillity at the border, but was also “strongly committed to ensuring India’s sovereignty and territorial integrity”.

Both the Indian and Chinese foreign ministries noted that the two sides are in regular touch at diplomatic and military level.

Srivastava also revealed that the two sides were discussing the possibility of activating the platform of the Working Mechanism for Consultation and Coordination on Border Affairs (WMCC).

Meanwhile, India and China held major general-level talks for the third straight day to defuse the situation and continue the process of disengagement as agreed by the corps commanders on June 6. It lasted for over six hours, with another meeting scheduled for Friday.