Debate: Galwan Is a Chapter in China's Tireless Pursuit of 'Lost' Territory

Since the beginning of this decade, there is little in China’s approach towards its territorial disputes to suggest that China has a limited, rather than a maximalist, approach to recovering what it considers to be its lost territories. Prem Shankar Jha’s piece in The Wire and the subsequent interview with Happymon Jacob on the Galwan standoff displayed a nuanced understanding of the India-China border issue but a troubling reading of China’s approach to territorial disputes.

Jha’s views do have the increasingly elusive quality of rising above party politics to define India’s national interest.

With regard to the Ladakh crisis he unequivocally identifies not rushing into war with China as India’s primary interest. Given that jingoism has hijacked policy and popular narratives, this suggestion is not misplaced.

However, the flaw in Jha’s perception of the situation is that he believes that:

(a) China has limited interests in Ladakh,
(b) it is India’s sole responsibility to create conditions for peace with China, and
(c) China’s asymmetric power leaves India with little military or diplomatic manoeuvrability in the present crisis.

While the last conclusion might be debatable, it leads to the wishful conclusion that once India recognises Chinese dominance as a fait accompli, then there is a real chance for a peaceful border in Ladakh. He advocates that India should appreciate China’s concerns in Ladakh vis-a-vis protection of the CPEC corridor that runs very close to rapidly developing Indian military infrastructure in the region.

For China, CPEC opens up a dependable alternate route to gulf oil supplies incase the US blockades the China’s eastern seaboard in the South China Sea. Jha argues that if India gets comfortable with the CPEC running through the disputed territory and doesn’t harden its position on the ground especially in Daulat Beg Oldi, and then the border dispute in the eastern Ladakh will actually lose its significance for China.

Jha’s assumptions of Chinese strategy are informed by an outdated understanding of Chinese foreign policy behaviour between 1980-2000 that prioritised stability as a primary objective in its relations with its neighbours and major powers.

Since the beginning of this decade, there is, however, little in China’s approach towards its territorial disputes to suggest that China has a limited, rather than a maximalist approach to recovering what it considers to be its lost territories. Chinese approach in the South China Sea (SCS) is instructive in this regard.

In the SCS, China has moved in a span of 30 years from a declared policy of ‘shelving territorial disputes for joint development of marine resources’ to now claiming the entire SCS as its own sovereign territory, including the corresponding airspace. The trajectory of this approach is similar to India-China relations since the 1990s.

Through the 1990s, China focused on economic growth, consistently followed a policy of ‘good neighbourliness’ putting territorial disputes on the back-burner. In the SCS, this translated to a low-intensity low-cost creeping occupation of marine features while increasing economic cooperation ASEAN nations.

Similarly, in the 1990s India and China concluded landmark agreements of 1993 and 1996 facilitated by the Chinese policy of avoiding conflict with neighbours. Since 1993, the major gain of the bilateral negotiations with China has been  the stability on the border and an exponentially improved but skewed economic relationship.

However, like in SCS, the long interlude of stability did not build trust to enable political negotiations on competing territorial claims. Despite several rounds of Special Representative talks and the working groups, India and China have not yet exchanged maps of the western and eastern sectors of the disputed border.

Now, it would seem that China has got a jump on India by pushing its claims in Galwan at the cost of the stability maintained on the border through carefully crafted CBMs.

Why has China risked decades of stable border management?

Since the beginning of this decade, China’s approach towards territorial disputes has undergone a shift. China now seeks to alter the status quo to force a solution in China’s favour. This irredentism arises, not from specific calculations of particular disputes, but from a shift from the Dengist principle of ‘bide your time and hide your capabilities’ to the present assertive policy of ‘achieving national greatness’.

Since the mid-2000, veteran foreign policy officials like Ambassador Wu Jianmin associated with the Dengist policy of building partnerships with neighbouring countries were seen in China as obstructing China’s rise. China now viewed itself  not as rising but as returning power, i.e., returning to claim its rightful place at the top of the regional and global hierarchy.

This shift is initially perceptible in Hu Jintao’s 2004 ‘New Historic Missions of the PLA’ that envisaged consolidating China’s  threatened territories from a position of strength. Under Xi Jinping, both policy and public opinion is visibly in favour of a muscular approach with use of force in territorial disputes not just a legitimate but preferred option.

Here, China has all but abandoned its pursuit of the image of a responsible power that it sought till the last decade, except in defence of the global capitalist system. In this decade China has already altered the ground situation SCS, East China Sea and most recently in Hong Kong.

In the SCS, since 2012, China has adopted highly visible incremental actions, often in the teeth of regional and US displeasure, to enforce its expanded claims. In 2012, China established Sansha city on Woody Island in the Paracel archipelago, claiming to nearly two million square kilometres of the SCS. Sansha, a brand new city of less than 2,000 people, is nearly 400 kms  away from Hainan, China’s southernmost province. Similarly, in Mischief Reef, off the coast of Philippines, China has created artificial islands by dredging the sea floor. These islands now have an air strip capable of landing fighter jets, advanced radars and SAMs.  It took China less than five years to create this capability. China  is now in a formidable position to defend its sea lanes of communication through Malacca Straits and deny freedom of navigation to other littoral countries as well as the US ships in the region.

The Chinese push into Doklam and Galwan is a part of the same  access-denial strategy. Galwan may have local triggers of India’s increased military infrastructure in Ladakh but it is following a pre-determined playbook of aggressively  staking claims on the ground, raising the costs of conflict to unacceptable levels for its neighbours, to force a solution in China’s favour.

Jha seems quite unconcerned with the Chinese asserting hegemony over the South China Sea and makes no noticeable link between the Chinese approach in SCS and in the Himalayas, except to flag China’s anxieties.

He argues that India must not see Chinese actions in Galwan as aggression but as a strong signal of China’s displeasure with India’s recent policies, including developing a strategic partnership with the US.

I would argue Galwan is not only a signalling exercise. China has changed the ground situation. If a diplomatic solution is not forthcoming, India will be forced to recalibrate either its political position on the LAC or undertake a costly military response to restore status quo ante.

Jha disagrees with the dominant view that PM’s Modi’s June 19 statement has weakened India’s territorial claims in Ladakh. He instead calls it an accurate depiction of the ground reality as there is no mutual agreement on the border and only contending claims lines in a ‘grey zone’.

The Galwan incident, Jha asserts, took place in the disputed territory and not in Indian territory, therefore Modi’s statement that no one entered Indian territory is factually correct. This is a nuanced bit of sophistry, advancing a bad fact.

While the LAC is not mutually agreed upon, however that does not imply that there is no mutual operational understanding of where the LAC runs. If that were the case, the border management agreements of 1993, 1996, 2005 and 2013 would have been impossible to negotiate and implement. In fact one of the key component of these agreements is to resolve the competing claims of the LAC at specific points, which China has consistently refused to do. 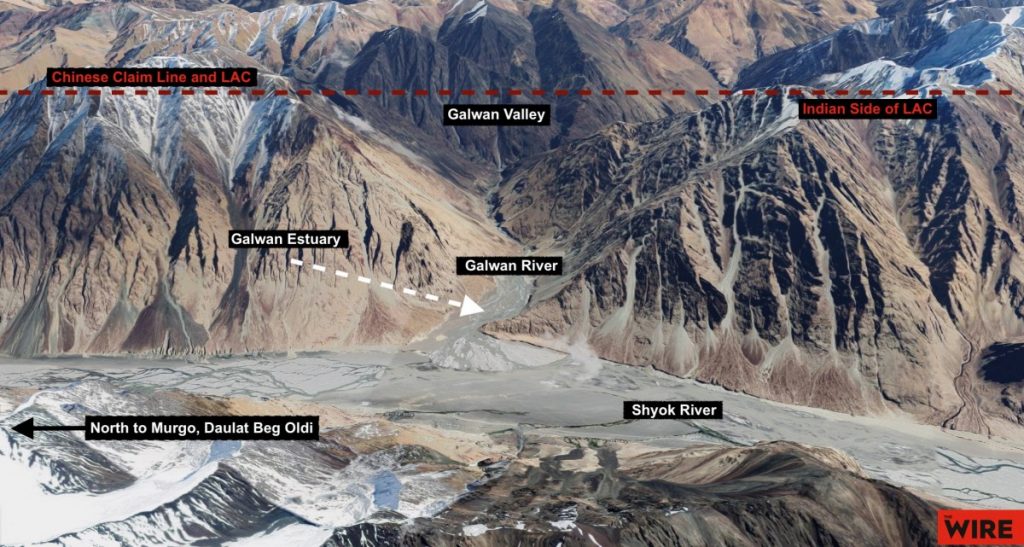 Satellite view of the Galwan valley and Shyok river. Image: The Wire/Google Maps

With Galwan, China has unilaterally abandoned the political commitment to maintaining a stable border.  While the border was unresolved, mutual faith in a stable border did make cooperation possible between India and China despite the increasing frequency of incursions/incidents.

For example, before the pandemic hit, the environment ministers of eight Himalayan nations, including India and China were scheduled to meet in Kathmandu to discuss a concerted approach to environmental governance of the Himalayas. That is clearly not a possibility anymore, till trust is restored on the heights.

Unfortunately, the most detrimental impact of this crisis will be on the fragile Himalayan ecology already reeling under militarisation on both sides of the border. Lamentably, Chinese actions have ensured that an Indian response hardening its defences all along the LAC, leading to further militarisation. Again, this is the same trajectory that we observe in the SCS, with Chinese dredging causing destabilisation of the seabed ecology followed by increased deployment and military activity by littoral nations.

Jha’s arguments are based on his long held view that the 1962 war was provoked by India’s ill-advised forward policy.  He is right in suggesting that since the 1962 debacle, political and popular narratives of Chinese betrayal have clouded Indian perceptions often demonising Chinese actions across the board without much appreciation for context.

He fears that the June 15 Galwan incident should not become another chapter in this history leading to an unnecessary clash.

However, one must also not be clouded by expectation of pacifist/limited behaviour from China that is increasingly comfortable with deploying military force both internally and externally.

In the past 70 years, PRC has occupied Tibet and is now posing a major threat to choking off the water resources of South Asia through its dam projects. India is not merely defending a territory where ‘not a blade of grass grows’ but its ability to be a governing partner in the Himalayas.