EU to India: Hope CAB Is in Line with High Standards of Indian Constitution

Speaking to reporters, ambassador Ugo Astuto refused to be drawn into further questions about the Bill. 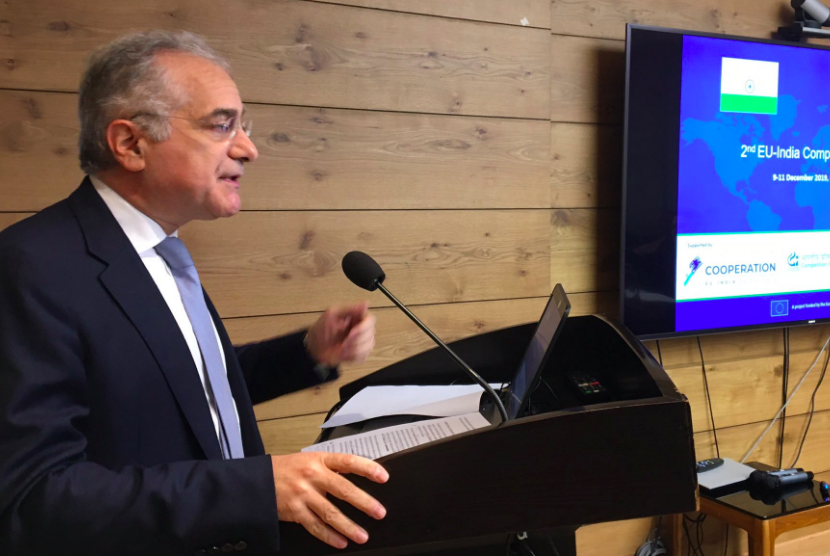 New Delhi: European Union ambassador to India Ugo Astuto on Tuesday expressed hope that the final shape of the Citizenship (Amendment) Bill will be in line with the “high standards” of the Indian constitution.

The EU envoy’s remarks came on the morning after the Lok Sabha passed the Bill that will only allow persecuted non-Muslim minorities from Pakistan, Bangladesh and Afghanistan a chance at Indian citizenship.

Speaking to reporters, Astuto said that he had read the minutes of the discussions in parliament. “The Indian constitution guarantees equality before law, and forbids all forms of discrimination. These are the principles that we share,” he said.

The senior European diplomat said he hoped that the final CAB, once it is passed by parliament, will uphold these principles.

“I trust that the outcome of the discussion would be in line with the high standards set by the Indian constitution,” said the head of the EU delegation to India.

Astuto refused to be drawn into further questions about CAB, asserting that the EU’s position was clear in his statement.

The EU’s response to CAB comes after a US federal commission and the house foreign affairs committee have issued critical statements. The ministry of external affairs has reacted to the statement from US Commission for International Religious Freedom, terming the call for sanctions against home minister Amit Shah as “unwarranted” and “inaccurate”.

So far, diplomatic sources have said that the Indian government has not indicated that they will conduct a briefing for foreign ambassadors on the CAB.

Meanwhile, the European diplomat, who had previously been posted as Italy’s deputy chief of mission in Delhi, stated that EU continues to hold the same position that was expressed after India had moved to remove Jammu and Kashmir’s constitutional autonomy and bifurcate the state.

“On Kashmir, our position has not been changed since August-September when the high representative had talked with the [Indian] external affairs minister on a couple of occasions. What EU has underlined is the importance of avoiding increasing regional tensions, and we have stressed that dialogue between India and Pakistan through diplomatic channels is crucial. We, as European Union, are concerned about the situation on the ground. Specifically on the restrictions on fundamental freedoms and it’s crucial that freedom of movement and lines of communication are not stalled,” said Astuto.

In September, Prime Minister Narendra Modi had met a group of 27 Members of European parliament, who were also allowed unprecedented access to Kashmir. Astuto reiterated that it was not an official visit, but was part of a private visit by those parliamentarians.

He added that India has been urged to “take steps to restore normalcy in the region and the freedom of all population”, while also understanding India’s security preoccupations in Kashmir.

Astuto also stated that there has been strengthened cooperation on political and security issues between India and the EU.

According to sources, India’s trust levels with Brussels increased after it indicated earlier this year that it was ready to go ahead with EU’s sanctions against Jaish-e-Mohammed chief Masood Azhar if the Security Council did not blacklist the terror leader. In May, UNSC’s 1267 committee eventually blacklisted Azhar, after China did not press forward its veto.

When asked about the status of the EU-India free trade agreement, Astuto did not give a specific reply, but noted that technical level talks are continuing, which are pursuing a positive agenda. He described the ongoing negotiations as “difficult”, but added that free trade agreement talks are usually complex all over the world. The EU envoy said that the differences between the two sides encompass labour standards to issues about tariffs and non-tariff barriers.

Currently, there are around 6,000 European companies in India, with EU being India’s top trading partner.