As China Kicks Off Party Congress, All Eyes on Xi Jinping

In the last five years, Xi has established unprecedented control over the party and the government. But this also means his mistakes and missteps have been magnified.

The Communist Party of China (CPC) has begun its 19th Congress in Beijing today (October 18). On Monday, the 18th Congress came to an end following its seventh plenary session, the communique of which indicated that there could be surprises in store in terms of the selection of the top leaders. It focused on the achievements of the anti-corruption fight, indicating that this key instrumentality will continue to be used ruthlessly by President Xi Jinping in the coming period and will probably get a fresh endorsement by the 19th Congress.

We will learn little about what is really happening in the week thereafter. Though Xi will present his work report on the very first day, which will list the achievements of the last five years and outline the roadmap for the future. It will give us a fairly good idea about the direction China will be headed in the coming years.

By October 24, we may get another important signal – indicators about how the party constitution is being amended to reflect Xi’s theoretical contributions. The wording of the amendment will signal Xi’s stature. So far there has been a great deal of speculation as to whether the contributions are inserted in his name, or merely put in without reference to him. If they are termed as ‘Xi Jinping Theory’, it would place him at the level of Deng Xiaoping, and if they are termed ‘Xi Jinping Thought’, that would bring him even to the level of Mao, though Xi would hesitate to go so far.

As of now, it must be pointed out that though Xi has accumulated much more power than any Chinese leader since Deng, the leadership is still seen as a collective one even though he was designated “the core” of the Central Committee (CC) by the sixth plenum of the 18th Congress in 2016.

By October 24, the day the Congress ends, we will know the lineup of the new central committee. The presence or absence of some of the leaders will indicate the lineup of the apex leadership – the politburo (PB) and its all powerful standing committee (PBSC) – which will be known on October 25. 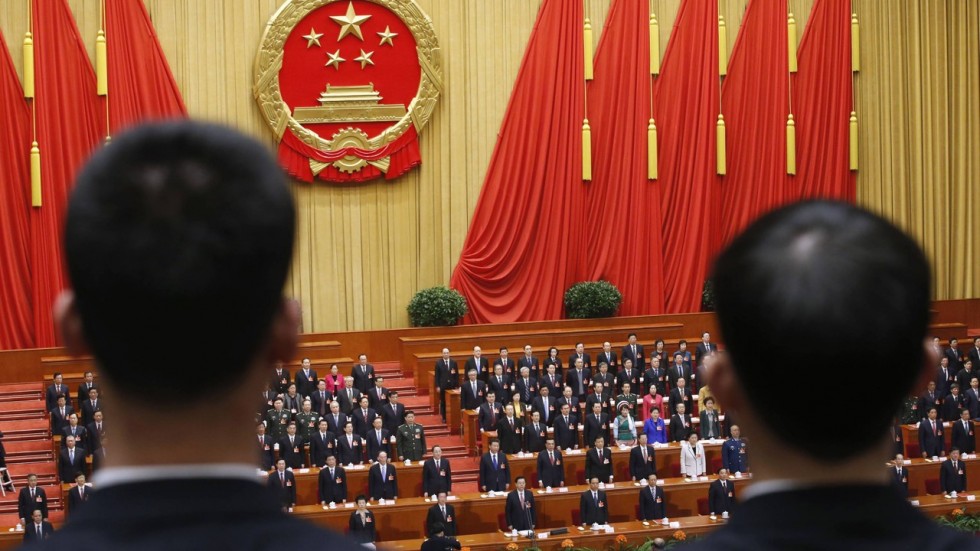 The 19th party congress will see the selection of new members of key bodies. Credit: Reuters

We already know who the new general secretary will be unless, improbably, he emerges even more powerful than he is expected to be and moves up one notch higher to the rank of chairman.

What Xi’s five-year term, which began in 2012, has seen is an unprecedented effort to consolidate his powers through multiple means – an anti-corruption campaign to defang rivals, creating new networks of loyalty within the CPC and the government, neutralising existing patronage networks not beholden to him such as the Communist Youth League and restructuring the People’s Liberation Army (PLA) higher command to enhance his own authority as the chairman of the Central Military Commission (CMC).

Xi has been hugely successful. Not only has he whipped the CPC into line, but also the PLA, which had developed dangerous notions of autonomy and had become thoroughly corrupt at the top levels. As many as 23 of the 31 provincial party secretaries have been turned over since 2016 and an unusually large number of retirements in the military and political hierarchy will help Xi to install his own team in the CC, PB, PBSC and the CMC.

Xi began his term pushing for market reforms. The third plenum of the CPC’s 18th Congress called for giving a decisive role to the market. However, this has not happened. Instead, the emphasis appears to be towards a steady re-assertion of the political power of the CPC across the board in Chinese society.

This has involved a systematic crackdown on human rights activists and civil society institutions, as well as generally tightening of CPC control over society through new national security legislation and rules to narrow the limit of freedom available in China’s controlled cyber space.

Clearly, the emphasis now is on the necessity of the CPC to maintain control over the country and its institutions, rather than taking the next step and opening up the economy to the outside world. Indeed, the pressure on China’s private sector is to become more like the state-owned enterprises by instituting CPC committees at all levels. In other words, ensuring that their key decisions are taken through party channels. China’s ambitious vision encapsulated in the ‘Made in China 2025 plan‘ envisages state-owned giants and the controlled private sector seeking global pre-eminence in areas like robotics, semi-conductors and electric vehicles.

All this prevents the reforms that are needed to keep the economy going, such as tackling the debt-burdened state-owned enterprises. In addition, restrictions on capital export have dampened the internationalisation of China’s economy. Experts say that the Chinese economy, which is still growing at a handsome rate, still depends on investment and credit, instead of transiting to one based on consumption. Though the CPC is making efforts to reform, such as promoting “rule by law,” the weakening of civil society institutions and freer press hampers good governance rather than aiding it.

As the CPC goes into its 19th Congress, China would like to present the vision of the rejuvenation of the Chinese nation through the Chinese Dream, built up by the Belt Road Initiative through a newly energised CPC, a restructured PLA with an all-powerful leader at its head.

In the last five years, Xi has established unprecedented control over the CPC and the government system. Which means, his mistakes and missteps can have a dramatically magnified impact. And this does not take into account issues over which China would have little or no control such as geopolitical developments in China’s periphery, developments on North Korea, or a global economic crisis.