China Warns India to "Remember the Lessons of History" 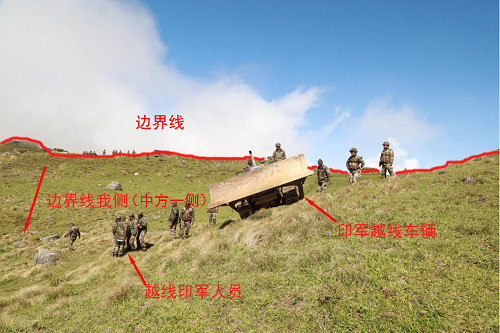 Pictures released by the Chinese government which claim to show Indian ‘incursion’ into China at the Sikkim section. Credit: Ministry of Foreign Affairs of China website

New Delhi: The rhetoric from China following the border-stand off is showing no sign of relenting. On Thursday, the Chinese army warned India to remember the “lessons of history”, while the Chinese foreign ministry displayed a photograph of what it said was an Indian ‘incursion’.

Chief of Army Staff General Bipin Rawat had said that the Indian Army was “fully ready for a two and a half front war”. But, he had added that India had effective mechanisms to defuse any adverse situation. Rawat had also pointed  to Prime Minister Narendra Modi’s statement that “not even a single bullet has been fired on the Indo-China border” in the last 40 years.

However, the question put to the PLA spokesperson was  based only  on the sentence about India’s readiness for a “two and half front war”. “We hope that the Indian army can learn the lessons of history,” the spokesman replied. 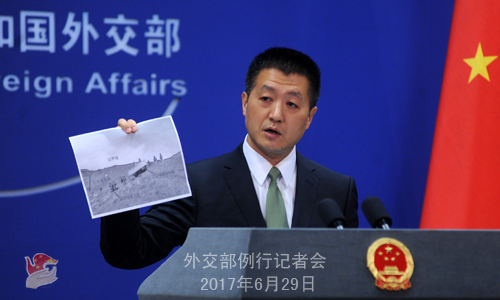 In another unprecedented move, the Chinese foreign ministry spokesperson, Lu Kang, on Thursday displayed a black and white copy of a photograph which he said showed the “trespass of the Indian border troops at the Sikkim section”.

China has claimed that Indian troops had entered into Chinese territory to stop road construction activities. Thereafter, Chinese soldiers also demolished a bunker of the Indian army. After the Indian army chief said that there was no incursion by the Chinese into India, Lu responded that this  showed that previous reports in the Indian media were wrong.

“Truth may be concealed for a while, but not forever. We once again urge the Indian side to abide by the existing boundary convention, respect China’s territorial sovereignty, and immediately bring the border troops that have crossed into China back to the Indian side of the boundary, so as not to worsen the situation and land itself in a more passive position.”

The Chinese spokesperson, however, did not answer directly if Bhutan had issued a demarche to stop the road construction in the Doklam area. He reiterated China’s stand that Doklam was within its jurisdiction. Later, the Bhutanese government released its demarche online –it demands that the status quo be maintained in Doklam.

“Doklam has been a part of China since ancient times,” the Chinese spokesperson insisted. “That is an indisputable fact supported by historical and jurisprudential evidence, and the ground situation. China’s activities in Doklam are acts of sovereignty on its own territory. It is completely justified and lawful,” he added.

The Chinese foreign ministry added that withdrawal of Indian troops was essential to even start a dialogue. “We urge the Indian side to immediately pull back the border troops to the Indian side of the boundary. That is the precondition for any meaningful talks between the two sides aiming at resolving the issue,” said Lu.