The Legacy of Bangladesh's Liberation Is Under Grave Threat

Dissenting voices in Bangladesh are being hemmed in from both sides, fearing attacks by militant groups and retribution by state forces for speaking up. 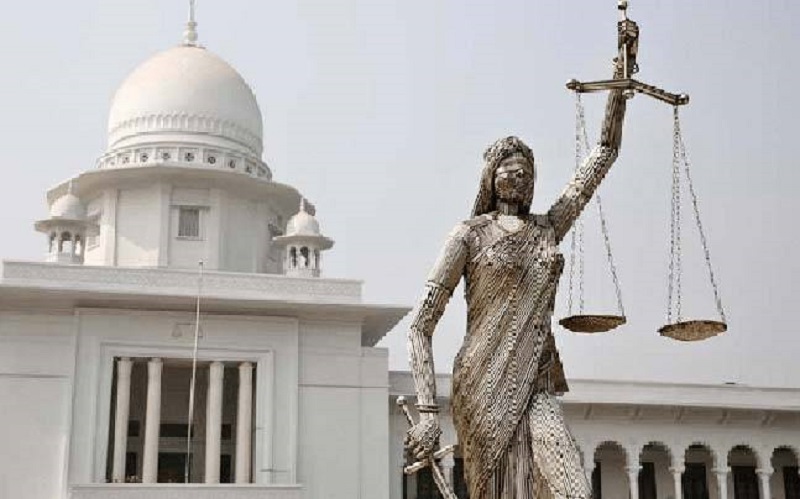 A statue of lady justice, outside the Bangladesh Supreme Court, now removed by the government after extremist groups said the sculpture was 'unIslamic'. Credit: Reuters

After a prolonged tussle, Prime Minister Sheikh Hasina’s capitulation to Islamic fringe elements demanding the removal of the statue of ‘Lady Justice’ – borrowed from a Greek goddess, albeit one wearing the traditional sari – that was installed outside its Supreme Court premises, has given a fresh lease of life to the propaganda of banned militant groups.

Coming in the wake of repeated attempts, in recent times, to stifle the independence of the judiciary and the people’s expression of dissent, the move becomes an augury of the future of a country that is now riven by sharp cleavages between militants and fringe Islamists at one end and a secular civil society at the other, with a mercurial and increasingly brutal security state serving as arbiter.

The contention of Hefazat-e-Islam – the radical fringe organisation lobbying for the removal of the statue – was that Islam does not believe in idols. However, this pales in front of the real blow that has been struck at the carefully crafted fabric of secularism and cultural interspersion that Lady Justice –with her Bengali attire standing for the modern ideal of justice achieved through the varied history of liberalism – symbolised.

Note that Hefazat-e-Islam is the very same organisation which engineered bloody clashes on May 5, 2013 in order to coerce the government to give in to their regressive ’13-point’ agenda. A total of 83 cases were lodged, with as many as 3,416 people, including leaders and activists of Hefazat, Jamaat-e-Islami and the conservative opposition BNP, being charged for the carnage.

And yet, suddenly, the government is no longer taking interest in persecuting the guilty members of Hefajat-e-Islam, even as investigators await further instruction from the government to take action.

The reality is that Hefazat has made deep inroads in Bangladeshi politics, despite being one of the major culprits that spearheaded the attacks on secular activists and atheists. For all practical purposes, it is a strong political  force, but refuses to become a formal party, ostensibly, because it does not want its activities hindered by the rule of law. Damningly, Hefajat’s members include people from various political parties and officials from bodies like the Election Commission.

When cases arising out of that violence could be kept remain in a limbo by the Awami League government, it is not surprising that Hefazat’s demand for the removal of the statue was weakly agreed to.

The fact that the government has responded with brutality and suppression towards students who protested at Dhaka University against the removal of the statue, further cements the lines along which the ‘secular’ Awami League-led state is changing – in the name of protecting citizens’ rights, it is empowering the security agencies and becoming an inadvertent catalyst for the accelerating the activities of banned militant groups.

The real empowerment is that of the security state

This can be seen in that Bangladesh’s vow to crack down on terror in the wake of sustained attacks on secular bloggers and activists has acquired a life of its own, over the last few months. Ironically, the community of bloggers and activists whose murders the state machinery set out to avenge by cracking down on Islamic extremism have instead now become the victims of that machinery, as the country’s brutal military, Rapid Action Battalion (RAB), and, the Counter Terrorism and Transnational Crime (CTTC) have ruthlessly pursued activists, staged suspect encounters and unleashed an everyday regime of application of brute force.

Over the past several months, Bangladesh’s vow to crack down on terror in the wake of sustained attacks against secular bloggers and activists has acquired a life of its own. Ironically, those whose murders the state machinery set out to avenge have now become its victims as the country’s brutal military, the Rapid Action Battalion (RAB) and the Counter Terrorism and Transnational Crime (CTTC) have ruthlessly pursued activists, staged suspect encounters and unleashed an everyday application of brute force.

The brutal torture and custodial death of activist Romel Chakma, who was from a religious minority group, followed by the disappearance of yet another activist, Jony Jamaddar, does not set a very reassuring precedent on the part of the state. Dissenting voices being are hemmed in from both sides, fearing attacks by the banned militant groups and retribution by state forces for speaking up. At a more sinister level, there is a growing collusion between the ‘secular’ ruling Awami League and radical religious forces, which threatens to destroy the legacy of 1971 liberation war, dismantle constitutional ideals and suppress expression.

Snowballing out of control

Under the prevailing conditions in Bangladesh, there is a very real danger that the security apparatus of various agencies will soon function independent of the civilian government, swallowing up the government and the opposition parties too, thereby dismembering any alternative, secular ideology. If this were to happen, there would be no guarantee that collusion between the army, the police and the secret anti-terror squads will not lead the country down the dark path of an authoritarian military regime like that of Pakistan.

A particularly disturbing proposition is the move to strengthen the Bangladeshi police by giving it jurisdiction all over the country as the ‘police anti-terrorism unit’. Since the existing counter-terrorism police units like the CTTC and the Dhaka Metropolitan Police (DMP) have to take permission in other jurisdictions, this will now be dispensed with. This may be an important institutional step in cracking down on growing militancy, but the fact that the CTTC was set up last year while the RAB was also recently established shows that the civilian government is too easily ceding critical control to unaccountable security agencies. While this is right now confined to the area of internal security, the transition of this control to key areas of foreign policy is demarcated by a very thin line.

From what is emerging in Bangladesh, it seems clear that the secret security state is tracking its citizens’ every movement. Arrests of suspected terrorists or members of banned outfits are taking place on nearly a daily basis, with many of those held belonging to the youth community. Similarly, in the last month alone, there have been more than three crackdowns on ‘terrorist dens’. This can only mean that either the state is very adept and skilled at cracking down on select terrorists or that terrorism has reached incredible heights in the country forcing daily clampdowns. Meanwhile, widespread arrests of suspected homosexual people and migrant Rohingya Muslims continue.

While all this may be being done to curb the threat of rising religious militancy in the country, the possibility of a thriving security apparatus snowballing out of the control of the civilian government remains very real. This is because of the changing behaviour of the Sheikh Hasina government, which seems to have an agenda of its own, with elections due any time between November 2018 and January 2019.

By no means can the changing pattern of behaviour of the Awami League-led government be described as adhering to the ideals of secularism and liberty to which it has often paid service. While the opposition Bangladesh Nationalist Party (BNP), led by Khaleda Zia, has obvious conservative credentials and has, over the years, amassed many radical extremist leaders within its ranks, even garnering the support of banned outfits, the same was not true of the Awami League. The government, over the last three years, sought to undertake reform in critical areas like secularising education, despite heavy opposition from extremist groups. 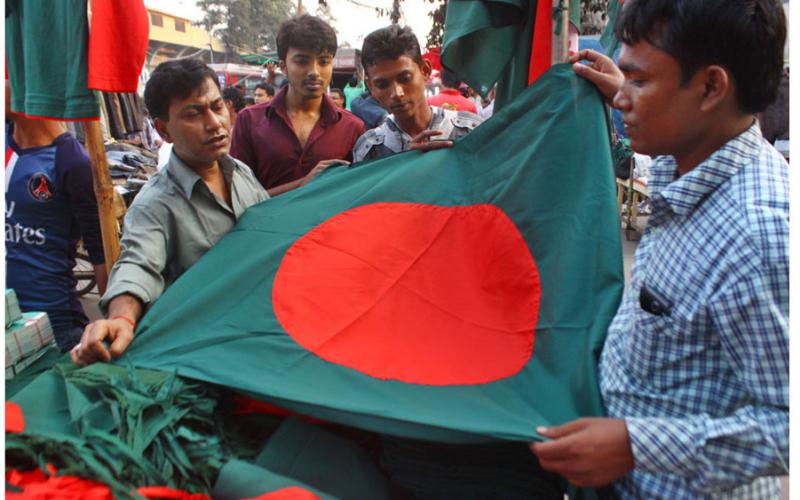 However, with elections around the corner, even the Awami League seems to be succumbing to conservative pressures. It is consistently appeasing conservative youth in a bid to strengthen its hand in rural constituencies and has even allegedly embarked on a project to build 500 mosques in the country, with $1 billion in funding from Saudi Arabia. Even though the Kingdom subsequently denied any such funding – perhaps due to linkages being made to sponsoring the radical religious agenda at a time when Bangladesh is battling militancy – the government stood exposed. The last time Saudi Arabia funded the Bangladesh government, when BNP was in power, the government ended up recruiting members of a banned Islamic outfit within its ranks.

On the civil front, there has been mounting tension between the government and the judiciary, and various charges of the government trying to stifle opposition parties by preventing them from holding rallies and protests. The most damning charge has come from chief justice S.K. Sinha about the government not allowing the lower courts to function independently and now even trying to control the Supreme Court.

The unfortunate irony is that all this is happening in a country whose liberation struggle in 1971 was founded on the very principles of reaffirming parliamentary democracy (which became a trigger for the war), whose constitution has valued democracy and justice, and whose national anthem was written by Rabindranath Tagore. Over the last few years, this legacy has been targeted by radical militant outfits, with even daily events reflecting serious contestations over the rule of law, democracy and freedom, and the basic right to life of Bangladesh’s citizens.

At this critical juncture, this basic right to life is being hemmed in by both sides – the government and the militants. The former is playing a particularly dangerous game of double-speak. On the one hand, it has unleashed an independent, powerful and brutal security state apparatus, which has, within two years, transited from ‘protecting’ to the transgression of basic rights, especially of minorities and hill tribes. On the other hand, under the ostensible garb of secularism, the government is playing a dangerous game of appeasement and stifling of basic freedoms – which may give it short-term leverage, but has the potential of radically disrupting and changing the country’s constitutional system. Both are mutually contradictory motives and sooner or later, the government will succumb to these contradictions, taking even the people down with it.

Garima Maheswari is currently with the Institute of Peace and Conflict Studies, New Delhi, and is pursuing a PhD at Jawaharlal Nehru University.