Asghar Khan: From Air Marshal to Dogged Opponent of Military Rule in Pakistan

He firmly believed Pakistan does not face an offensive threat from India and has nothing to fear on its eastern front unless it keeps provoking its giant neighbour. 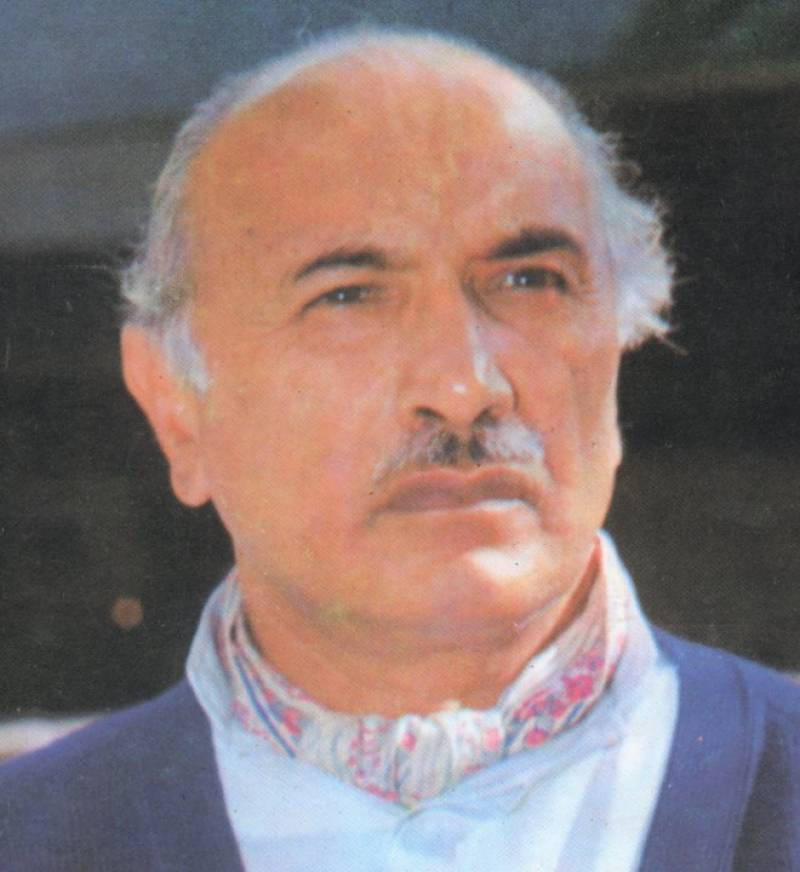 I was walking towards the School of Physical Fitness (SPF), Peshawar run by the Pakistan Air Force (PAF), along with my uncle who coached the PAF hockey team there when I saw a tall man coming out of his car. The man was Air Marshal Asghar Khan, who, true to his famous punctuality, had arrived for a prize distribution ceremony where I also got to meet him. The air marshal had retired several years ago but according to my uncle, “he arrives a good 15 minutes before any event he is invited to”. A few years later, Asghar Khan was to snap at the leaders of the Pakistan National Alliance (PNA) in a letter to the Jamat-e-Islami (JI) leader Professor Ghafoor Ahmed, chastising them for their tardiness and lamenting the fact that he has to unnecessarily wait for them for hours for the PNA meetings to start. The air marshal breathed his last on January 5. He was the subcontinent’s first jet pilot, the first native head of the Pakistan Air Force and one of the last political stalwarts of his country.

Asghar Khan belonged to the Malikdin clan of the Pashtun Afridi tribe from Tirah but was born in Jammu where his father, an army officer, was stationed. He later went to the Prince of Wales Royal Indian Military College (RIMC), Dehradun. Asghar Khan first got his commission in the British Indian Army but then moved to the Royal Indian Air Force (IAF) and was commissioned as a pilot officer. His first posting was at the Peshawar base. He was later a flight commandant against the Japanese on the Burmese front and then had the unique distinction of soaring as the subcontinent’s first jet pilot in a Gloster aircraft. He met Sukarno of Indonesia who invited him to join their fight against the Dutch colonisers. Asghar Khan seriously considered the option and asked Muhammad Ali Jinnah for counsel. Jinnah advised him to work for the anticipated new country, Pakistan. When the subcontinent was partitioned he was stationed at Ambala as chief flight instructor. As fate would have it, his replacement, Wing Commander Nair, asked the PAF’s first chief Air Vice Marshal Allan Perry-Keene to have Asghar Khan and his family evacuated to Pakistan in the air chief’s plane. Perry-Keene obliged. Asghar Khan later said that the train he and his family were originally supposed to board for Pakistan from Ambala was attacked during the partition riots and there were no survivors. 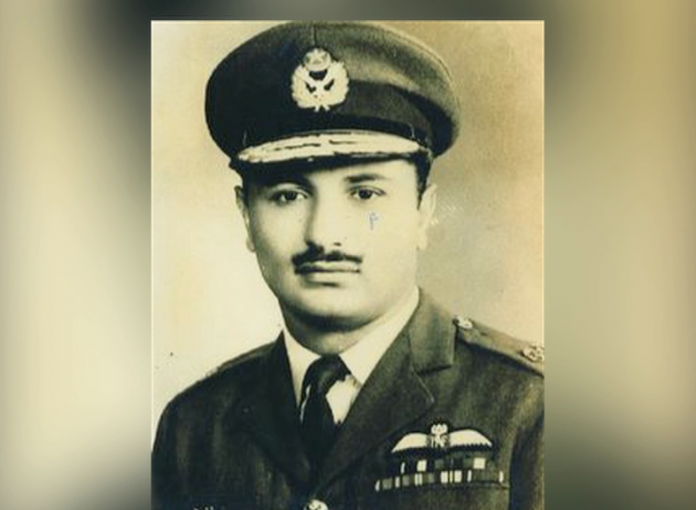 In Pakistan, Wing Commander Asghar Khan commanded the PAF training school Risalpur, where he was host to the country’s founder Mohammad Ali Jinnah, the day the latter made his famous speech:” a nation without an air force is at the mercy of its enemies … PAF should be second to none”. Asghar Khan considered this to be his mandate. He became the first native air chief of the PAF and, at age 37, the youngest ever to lead it. He served two tenures as the air chief and retired a few months before the 1965 war with India. The PAF Academy Risalpur now bears his name. He later served as chief of Pakistan International Airlines (PIA), from where he retired in 1968.

Asghar Khan was the air chief at the time of the March 1965 Indo-Pak army skirmish in the Rann of Kutch. When he came to know about the battle, he immediately realised that the PAF’s closest base, Maripur (now Masroor), would be barely able to support an air effort in the Rann of Kutch. Asghar Khan picked up the phone and called his old batch-mate, Arjan Singh, who was serving as the IAF chief and convinced him to keep both the air forces out of the war. Asghar Khan told the Indian air chief that should the IAF get involved, the PAF would be compelled to respond elsewhere, thus broadening the theatre of war.  Singh consulted with Prime Minister Lal Bahadur Shastri and agreed with Asghar Khan’s suggestion. Both air chiefs took flak at home but ended up averting a disaster, though not for long.

Asghar Khan used to lament the fact that the Pakistan army not only initiated every single one of the four wars with India but also kept the PAF in the dark about each one. In fact, after getting a whiff of General Ayub Khan’s misadventure in Kashmir, Asghar Khan tried to dissuade him by correctly advising that a provoked India is likely to respond along the border in an all-out war. But Ayub Khan, advised by his foreign minister Zulfikar Ali Bhutto, pursued the intervention in Kashmir which precipitated the 1965 Indo-Pak war.

Asghar Khan firmly believed that Pakistan does not face an offensive threat from India. His view was that for millennia, the subcontinent has been geopolitically introvert, not expansionist and that Pakistan has nothing to fear from India unless it keeps provoking its giant neighbour.

From the air to politics

Asghar Khan formally threw his hat into the political ring in November 1968 when he openly declared his opposition to the military dictator Ayub Khan.

He was immensely popular among the urban classes when he led the anti-Ayub Khan campaign in both West and the then East Pakistan. He was considered a viable alternative first to Ayub Khan and later to Bhutto. When General Yahya Khan replaced Ayub Khan and imposed his own martial law, Asghar Khan opposed the military dictatorship again, this time returning his national awards Hilal-e-Pakistan and Hilal- Quaid-e-Azam, in protest.

Ironically, his nemesis and the ostensible democrat, Bhutto served as a minister under both of those martial law regimes. In fact, Asghar Khan – a soldier to boot – had the unique distinction of opposing four martial regimes viz. Generals Ayub Khan, Yahya Khan, Zia-ul-Haq and Pervez Musharraf. He was one of the few West Pakistani politicians to travel to Dhaka to meet Sheikh Mujib-ur-Rehman to find a solution to the East Pakistan crisis. 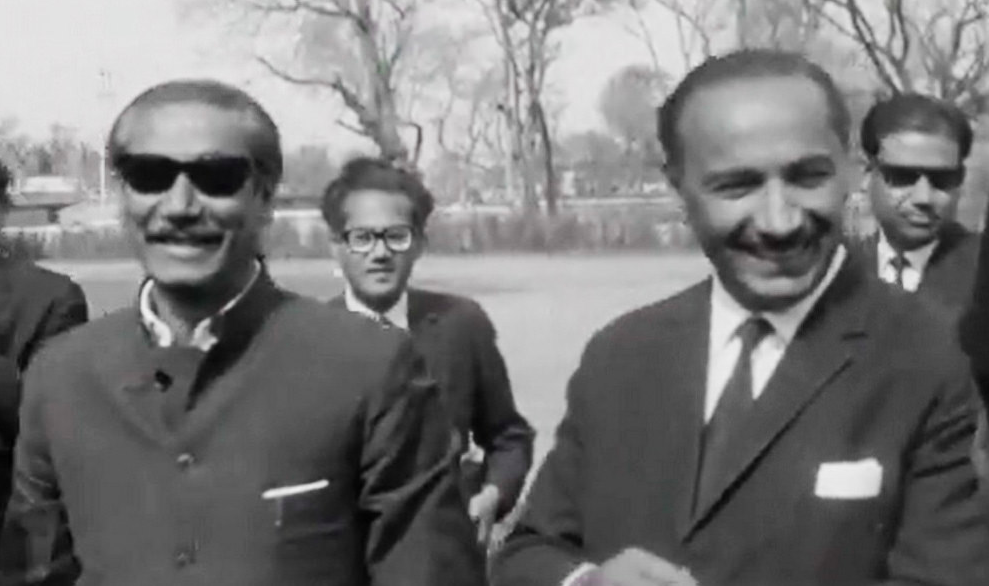 In March 1969, he announced the formation of his Justice Party  at the residence of his friend and fellow RIMCian, the secular Baloch leader Sardar Sherbaz Khan Mazari. The Justice Party was later merged with several outfits to form the Pakistan Democratic Party but the merger did not work out due to the shenanigans of Nawabzada Nasrullah Khan. Asghar Khan later founded the Tehrik-e-Istaqlal (TI) but contested the 1970 elections as an independent and lost from Rawalpindi to the Pakistan Peoples Party (PPP). The honourable man that he was, he conceded his defeat instantly and wholeheartedly. However, when the PPP government blatantly rigged the 1977 elections, Asghar Khan protested along with the other PNA leaders like Maulana Mufti Mahmud, Sardar Sherbaz Khan Mazari and Begum Nasim Wali Khan, and became Bhutto’s worst nightmare. The Bhutto regime targeted Asghar Khan, his family and his party viciously. In addition to several arrests and house arrests, his Abbottabad residence was mysteriously burnt to the ground during those days, his brother-in-law was charged with treason and his party’s rallies were physically attacked by PPP goons.

Bhutto to Zia and after

The air marshal was wrongly maligned for inviting Zia-ul-Haq’s martial law by way of a letter, which he had written to the armed forces asking them to disobey any illegal orders of the junta and the Bhutto regime. The fact is that it was Bhutto himself who brought General Zia-ul-Haq to one of the final meetings with the PNA on July 1977, to dissuade them from asking for the army’s withdrawal from Balochistan and disbanding of the infamous Hyderabad tribunal under which he had incarcerated the nationalist Baloch and Pashtun leaders of the National Awami Party (NAP). Bhutto relied on the then ISI chief ,General Ghulam Jilani Khan, and used to call the corps commanders directly and frequently, to lobby them. While several of the PNA parties joined Zia-ul-Haq’s civilian cabinet, Asghar Khan’s TI kept away from the regime.

After General Zia-ul-Haq toppled Bhutto, he threatened Asghar Khan that he would try him for sedition over that same letter that is maliciously cited even today as his ostensible support to the military. Ironically, Bhutto, who is considered the first elected prime minister of what remained of Pakistan after 1971, imposed an emergency one day after the country adopted its 1973 constitution, and suspended the very fundamental rights guaranteed by it. He organised a paramilitary force called the Federal Security Force (FSF) that was answerable only to him and was deployed to hound his political opponents. He imposed governor’s rule in Balochistan after dismissing the NAP’s elected government. He later incarcerated the NAP leaders on trumped up charges and eventually banned the party through a Supreme Court reference. Some charge Asghar Khan with calling for Bhutto’s hanging in a public rally at Attock. Be that as it may, there is no evidence whatsoever that he connived to have his nemesis physically eliminated. Asghar Khan was known for a stubborn streak and somewhat short temper but vengeance was not one his traits.

Asghar Khan’s TI was one of the founding parties – along with the PPP led by Bhutto’s widow Begum Nusrat Bhutto and Sardar Sherbaz Khan Mazari – of the Movement for the Restoration of Democracy (MRD), launched against Zia-ul-Haq’s iron rule. At the height of Zia’s power, Asghar Khan defied him and traveled to Kabul to meet Afghanistan’s communist president Mohammed Najibullah. Upon his return, he wrote a series of articles lambasting the so-called jihad that Zia had unleashed and warned against its blowback for Pakistan. Asghar Khan contested the 1990 elections under the People’s Democratic Alliance, in partnership with Benazir Bhutto’s PPP. The famous Asghar Khan case against the former army chief Mirza Aslam Beg for interfering with the 1990 elections through distributing money illegally to favourite politicians, was yet another battle in his constant fight against the role of generals in politics.

I had the good fortune of meeting the air marshal at the TI’s provincial offices in Sukarno Square, Peshawar, then managed by his vice president, Inamullah Khan. I last met him at a 2007 rally against General Pervez Musharraf’s regime in Islamabad, where I also got to share the stage with him. In his usual firm tone, terse tenor and husky voice, Asghar Khan chastised the other politicians that if they really wanted to do something against Musharraf they should be criss-crossing the country to run a proper movement, instead of all congregating in Islamabad.

Asghar Khan was an odd man in the wheeling-dealing political crowd of Pakistan. Many Pakistani leaders, including the three-time prime minister Mian Nawaz Sharif, started their career in the TI. Asghar Khan believed in sticking to his political ideals and in continuous action to achieve them even if an electoral victory remained elusive. His only election win came in the later-annulled 1977 elections but he remained a towering figure throughout his air force and political career, inspiring many with his upright stance and unblemished character. He used to say that electoral victory does not matter to him as his job is to tell the truth and the masses want to hear that truth. He will be fondly remembered for being a stellar officer and a gentleman politician.

Mohammad Taqi is a Pakistani-American columnist; he tweets at @mazdaki