At Russia-Led Regional Talks, Afghanistan Says Talks With Taliban Can Only Be Held on Its Soil

Afghanistan has said that it seeks peace through direct talks with the “authoritative leadership” of the Taliban. 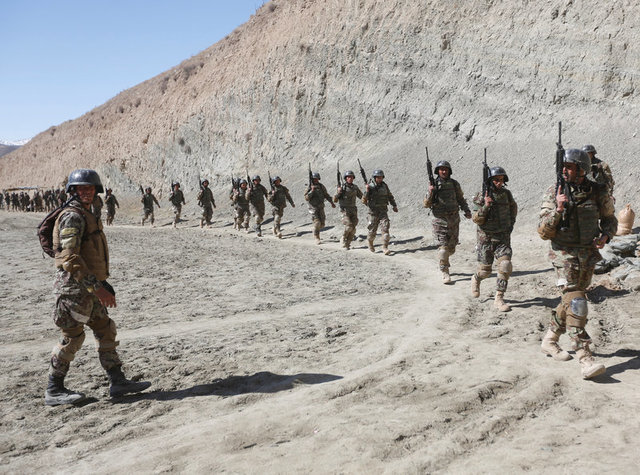 New Delhi: Even as Russia offered to host talks between Afghan government and Taliban, Afghanistan on Friday said that “best venue” for direct peace talks was on Afghan soil – and pointedly indicated to Moscow that separate outreach to the Taliban will not be helpful in the success of the regional process.

This message was conveyed by a senior Afghan official who was leading his country’s delegation at the 11-nation regional talks held in Moscow on Friday. This is the third time that Russia has hosted regional talks, with the first held in December 2016 with only China and Pakistan.

At the second meeting on February 15, India was invited for the talks, along with Afghanistan and Iran for the first time – making it a six-nation conference. The talks have now expanded with the addition of five Central Asian nations. Deepak Mittal, head of the external affairs ministry’s Afghanistan-Pakistan-Iran division, represented India at the meeting to coordinate regional efforts to kick-start the stalled reconciliation process.

Despite the expansion of the talks, the missing stakeholders continue to be US and western countries who have troops stationed on Afghanistan. Washington’s preeminent role in Afghanistan was underscored starkly just a day before the regional consultations, when US military dropped its most powerful non-nuclear bomb over the tunnel complex being used by ISIS officials in eastern Afghanistan’s Achin district.

According to sources, M. Ashraf Haidari, Afghan foreign ministry’s director general for policy and strategy, told the gathering of senior officials that Taliban had to made to realise that could not win militarily.

The message from the Afghan government was that it sought peace through direct talks with the “authoritative leadership” of the Taliban. Haidari also added that the “best venue” for “face-to-face” talks was on Afghan soil, The Wire has learnt.

Previously, the Afghan Taliban had also indicated that it would prefer to hold talks in another country.

Afghanistan has repeatedly accused Pakistan of continuing to nurture ‘safe havens’. In turn, Islamabad has also accused Kabul of giving sanctuary to the TTP. After a blast at a sufi shrine in Sindh, Pakistan had closed down the Torkham border for 32 days.

While he said that “regional consensus” was emerging on the importance of long-term stability of Afghanistan, it had to translate into “concrete steps” to be taken by each international stakeholders to support an ‘Afghan-led and Afghan-owned peace process’.

At the last meeting, Haidari had pointed out that the failure of the Quadrilateral Contact Group (QCG) – China, Pakistan, US and Afghanistan – to bring the Taliban to the table was due to the members not fulfilling their commitments.

Afghan President Ashraf Ghani’s disenchantment with Pakistan had begun with the revelation in 2015 that Taliban leader Mullah Omar had been dead for over two years. In effect, Islamabad had committed as part of QCG’s distribution of responsibilities to bring a dead man to the negotiating table.

During the consultations, Haidari also reminded the hosts that Moscow should not have independent outreach with Taliban, side-stepping Kabul. According to sources, the Afghan diplomat had noted that there was “no substitute for state-to-state cooperation” – which he said was the foundation for the latest regional process to help Afghan government enter peace talks with Taliban.

He was referring to Afghan government’s accusation that Moscow has been surreptitiously providing assistance to the Taliban to fight armed groups under the ISIS banner. This was also raised by a top US general at a Senate hearing last month, and then strenuously denied by Russia.

Incidentally, the Taliban had also issued a statement on Friday, which denied that the Russian government was providing it any support. “The Islamic Emirate has not receive any form of military or logistical support from Russia,” said the statement.

However, the statement did not rule out that it was in contact with the Russians, asserting that “political dialogue” with regional powers was an “indispensable tool” for furthering its interests.

The US had been invited to attend the 11-nation talks – but gave it a pass.

On the eve of the talks, US state department acting spokesperson Mark Toner seemed to describe the talks as a Russian vanity project. “…we just felt that these talks – it was unclear to us what the purpose was. It seemed to be a unilateral Russian attempt to assert influence in the region that we felt wasn’t constructive at this time,” said Toner.

India and Afghanistan had both strongly supported inviting the US to the regional talks in the February meeting. Pakistan has also stated that Washington’s participation was a key ingredient to ensure success.

New Delhi has misgivings about the sustainability of the Russia-led regional process without the active involvement of the countries who have boots on the ground in Afghanistan.

India also conveyed to Russia that although the regional initiative was a good start, international contribution could not be ignored. Apparently, China may have also conveyed a similar message to Russia – with Beijing especially worried about a vacuum in Afghanistan if foreign troops were pulled out completely and how it would allow a fertile launching pad for Uyghur militants..

Unlike Russia, China has never publically called for the withdrawal of soldiers from Afghanistan, as it is not entirely convinced about the ability of Afghan security forces – or even Pakistan – to reign in terrorists in the region.

As per India’s assessment, Russia’s increased visibility in Afghanistan was partly to needle the Americans, but also to create a “bargaining chip” by creating a larger role for itself in the region. Moscow is also worried more about the spread of ISIS in Afghanistan, rather than Taliban – convinced that this was a ploy by the US to keep it tied in Central Asia. Both, Afghanistan and India believe that most of the ISIS groups in Afghanistan are mainly TTP militants – and many of them still maintain their links to the Pakistan establishment.

Moscow’s determination to play broker in Afghanistan faces a major stumbling block – it does not enjoy equal levels of confidence from both sides of the Afghan conflict. While Russia largely sees the Ghani government as directly under Washington’s thumb, there is also no love lost in Kabul for the Putin regime. “Russia can’t find a bigger role till both the Afghan government and Taliban find them acceptable,” sources explained to The Wire.

Russia’s efforts to carve out its place had rubbed India the wrong way when it began to court Pakistan aggressively, including with weapons sales. Moscow had to roll back an announcement to hold joint military exercise with Pakistan in Gilgit-Baltistan, after India made a strong protest.

After Indian officials voiced their concerns, Russia told New Delhi that they were going into it with their eyes open, aware of Pakistan’s games in the region, diplomatic sources said. But, at the same time, Russia also feels that that the proposal to start peace talks with the Taliban requires glad-handing Islamabad.

But the ‘moderate’ Taliban, who will have the authority to hold talks with the Afghan government and reach an acceptable resolution to end the civil war, is an elusive creature that many stakeholders are trying to identify.

A Taliban commander who senses that a military victory is not possible will be deemed as ‘moderate’. Then comes the issue comes of how much influence they wield to be able to be part of a formal peace process.

“We believe that it is the call of Afghan government on who to talk to (among the Taliban), rather than any other country pushing forward a certain interlocutor,” said a senior Indian official.

The Afghan government had complained that whenever they began to send feelers to certain ‘moderate’ Taliban leaders based in Pakistan, most disappeared or were killed.

Indian officials claim that as part of the regional consultations, New Delhi has been amplifying the Afghan government’s view that it was not just important to talk about how to get the Taliban to the table, but that the first step has to be a reduction in violence. “Among regional countries, we are the strongest voice on this outside Afghanistan,” he said. This is, of course, tied with India’s avowal on various international platforms that Pakistan had to be pressured to dismantle the terror infrastructure.

At the last meeting, India and Afghanistan had together pushed for all parties to reiterate their commitment to the so-called ‘red lines’ for engagement with the Taliban – which include giving up violence, abiding by Afghan constitution and cutting ties with al Qaeda.