If Tesfaye still had that phone, the phone that Teddy borrowed and never returned, he would have his contacts. If he had his contacts, he would still have his home. 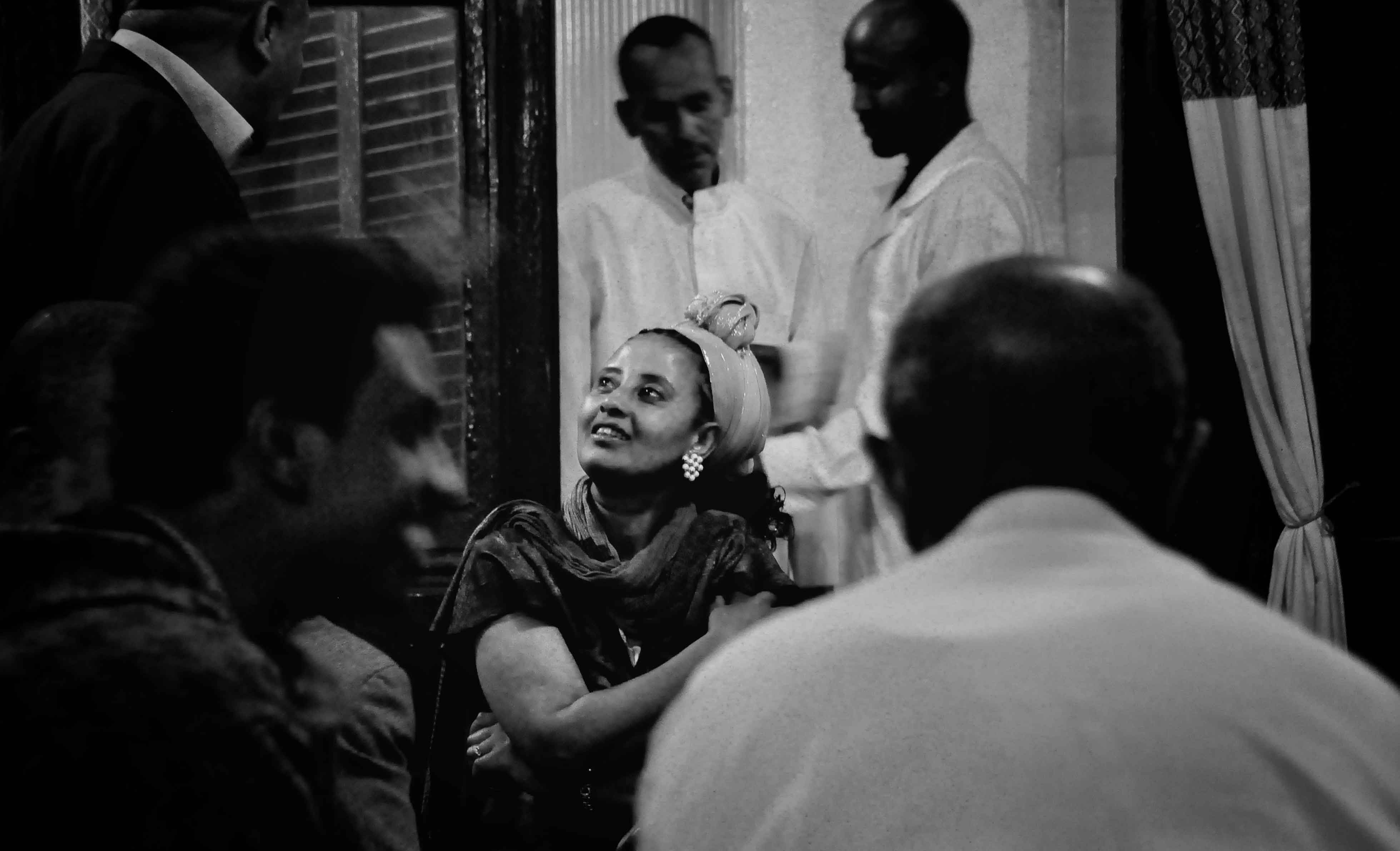 Years later, the forger of documents would pause mid-sentence – mouth full of qat, lungs full of cigarette smoke – to consider the loss of his Nokia 1800 at the hands of one of Ethiopia’s biggest pop stars. “Have you ever met Teddy Afro? Please tell him about my phone and what he did to me.”

If Tesfaye (name changed) still had that phone, the phone that Teddy borrowed and never returned, he would have his contacts. If he had his contacts, he would still have his home. “When I lost my property, everything gets dark on me and I go back to this fucking business.”

Tesfaye warily sipped his coffee. “The merkana is killing me,” he muttered, referring to the qat-high accelerated by caffeine. Tesfaye is short and fidgety, with cropped hair, a neat goatee, and an oversized leather jacket that he wears with an air of melancholic dignity.

He was enjoying himself just a minute ago, spinning a rollicking yarn of how he once smuggled a ride on a merchant vessel all the way to Bulgaria and was deported to Djibouti (it ended with him riding the train from Djibouti back to Addis), but then sunk into a funk at the recollection of his misfortune.

It was his wife’s house – a “G plus 2”, Addis-speak for a three-storey property, – on the outskirts of town. A proper building in a zoned residential area, not a chereka biet, or ‘Moon House’, assembled by squatters and knocked down in a day by the government.

“What ruined my life right now is because I lent my office – my phone – to someone. One month before I get free from prison. One month and five days.” The cityscape of Addis Ababa, literally translated as New Flower, radiates in concentric whorls down from the Palace on the hill, Emperor Menelik’s abode that is now the home and office of the Prime Minister of Ethiopia, out towards city neighbourhoods like Urael, St. George’s Church in Piazza, and Ras Biru near Meskel Square, that were once camps administered by the nobility.

The peasantry was settled on the farmlands between these camps, and with time, the informal city melded with the formal to weave the distinctive patchwork pattern of modern day Addis Ababa, where the wealthy live amidst the poor and many streets still have the whimsy of walking trails rather than the grid-pattern favoured by urban planners.

We sit at a coffee shop by La Gare, the train station at one end of the historic Addis-Djibouti rail line. The last train to Djibouti left sometime in 2008-09, but the Ethiopian government has since pledged to restart the line and lay 2000 km of track by 2016.The BRIC countries have jumped at the contracts to refurbish the train system, but Tesfaye is dismissive of the ‘Chinese virus’.

China’s push into Africa has affected him personally, “For all the things I’ve lost, I wish to be a Senator one day.” One Monday not so long ago, he sold a stack of cellular pre-paid vouchers to a line of souks near the national stadium. When he returned to collect his payment that Wednesday, a Chinese construction contractor had ripped up the street to install pylons for the city’s light rail project. The shops were gone, and so was his money.

At least eight different master plans, including one by Le Corbusier, have failed to impose a pattern on Addis since Emperor Melenik established the city in the late 19th Century. “Addis was not established as a city – it was established as a military camp,” explained an official at the Ethiopian Institute of Architecture Building and Construction, “The form of the colonial city is the formal is in the centre and the informal is on the periphery.” In Addis, a city that was occupied but never colonized, the periphery swamped the centre. “All the in-between became slum areas.”

In 1974, when Haile Selassie, the last emperor, was overthrown by a section of the army, the incoming Derg regime abolished private ownership of land. Owners of multiple homes were asked to choose one, the remaining houses were confiscated and the tenants paid rent to the government.

Each of Addis Ababa’s mud homes was painstakingly registered, numbered, and organized into kebeles, or neighbourhood communities. These confiscated ‘Kebele houses’ were never upgraded because the government hoped to tear them down and rebuild them, but never did. Kebele offices were set up in each locality collect rents, but soon became surveillance outposts for the Derg’s feared secret service.

The current regime, led by the Ethiopian Peoples’ Revolutionary Democratic Front (EPRDF), toppled the Derg in 1991 but retained the kebele system of collecting rent and information. Since 2002, the EPRDF has sought to replace the kebele shantytowns with multi-story condominium housing to free up inner city real estate.

The plan’s most recent iteration, as the Addis Ababa and the Surrounding Oromia Special Zone Integrated Development Plan, is perhaps its most controversial as strikes at the heart of the grand federal compromise that undergirds the Ethiopian State that guarantees extraordinary rights to each of the country’s nine ethnic regions. Addis Ababa lies in the heart of Oromo country – Ethiopia’s largest ethnic group that has been historically marginalized by the Amhara kings, and then by the ruling EPRDF, which is dominated by the Tigrayans from the North through the Tigrayan Peoples’ Liberation Front.

The new city plan aims to integrate 8 surrounding Oromo settlements into Addis Ababa, and thereby wrest control of these lands from the Oromo state administration and bring them under the control of the federal government. When it was announced, Oromo students took to the streets in protest, only to be gunned down by the federal police.

Capital cities – be it Delhi or Addis Ababa – are apparently too important to be left in control of their residents.

Tesfaye and his wife once lived in kebele housing in the centre of town, but were offered a plot on the outskirts when the house was torn down in a road-widening project.

The year was 2007, 2000 if you followed the orthodox Coptic calendar, the Golden Millennium if you lived in Ethiopia. Tesfaye was awaiting trial for alleged possession of marijuana; Teddy Afro was in for killing a homeless boy who came in the way of his BMW.

Tesfaye said he was punished for complaining about a policeman who broke his arm in an unrelated argument. Teddy Afro’s fans said the pop star was being persecuted for singing songs critical of the government. His song, ‘Jah Yasteseryal’ or ‘Redemption’, had become a protest anthem after the parliamentary elections in 2005 when the opposition said the results were rigged, took the streets to protest, and were gunned down.

Two hundred people were killed and thousands imprisoned when security forces partisan to the ruling EPRDF opened fire on protestors. (In the 2010 elections, the EPRF won a 99.6 percent majority in parliament; a result that was, the party insisted, in line with the wishes of the people of Ethiopia. This year when Ethiopia went to polls once more; the EPRDF won a 100 percent of the seats.)

So there they were, Teddy and Tefaye, crammed in with the petty thieves, errant drivers, journalists, Muslim Clerics and opposition activists that make up Addis Ababa’s prison populace.

“The stink was so bad that when I got a chance, I insulted the judge. He got angry and sentenced me to a year and five days.” Teddy Afro pleaded not guilty and got six years. On the way from court to prison, Teddy begged for a phone to call his family.“ No one had credit but me.” Teddy borrowed the phone and vanished in the crowd of policemen and prisoners.

Paroled nine months later, Tesfaye learnt his wife had been swindled out their home. She was duped into signing away her power of attorney to a friend who sold the house and decamped with the cash. He tried to sue, but didn’t have the money. He thought of borrowing money from his friends in the diaspora but the phone (now lost forever) – why, Teddy, why? – had all his contacts. So Tesfaye began forging documents for a living, a skill that had held in good stead since the time he forged his university mark sheet.

“Making forgery, it’s the worst drug,” Tesfaye said, as he whisked qat leaves from the pockets of his leather jacket into his mouth, “Injected drugs are harmful to the person, and making forgery? It makes you blind. All you can see is forgery, nothing else.”

Making forgeries may limit the imagination of the forger, but it certainly expands the possibilities of the client. Here, for instance, is one my favourite Addis jokes from the year and a half I spent in Addis:

There was once a prizefight between an Ethiopian cat and an American cat. Everyone feared for the slender and unassuming Ethiopian cat pitted against the swaggering, steroidal, American beast.

“What’s the secret of your success?” harrumphed the disbelieving reporter from the BBC. “My secret?” the Ethiopian whispered, “I’m not really a cat. I’m a tiger.”

The Ethiopian cat reminded me of the jokes popular in the newly liberalized India of the 1990s. There was one about the Indian, the Russian and the American who set out to build a space shuttle: the American built the shuttle, the Russian fashioned the engine, the Indian worked secretly by himself until just before the launch, when he revealed the fruits of his labour: a sticker that said “Made in India”.

In Ethiopia, much like in India, the jokes puncture the global ambitions of our elites and acknowledge that success always has its secrets and there is no such thing as a fair contest. Most of Tesfaye’s clients ask him to forge letters of recommendation or prior employment. Government statistics estimate total urban unemployment at 17.5 percent, but a 2012 study by the International Growth Centre at the London School of Economics indicated that almost a quarter of urban youth under 30 were unemployed and more than half were under-employed.

With such a paucity of jobs, employers can afford to be picky about who they hire, and so Tesfaye prepares detailed, and entirely fictitious, work histories for young people seeking work. For those seeking jobs abroad, he forges them Eritrean citizenship papers to make it easier for his clients to seek political asylum.

He has an archive of letterheads, stamps and seals, and claims he is prized for not just his attention to detail, but also his knowledge of government documentation.

“There are white peoples who need to have that thing – custom papers, license of business. I give them my own advice – don’t use such kind of documents,” he said, “There is a crosscheck and if a crosscheck comes, you’ll be in the prison, then I’ll be next.”

Of late, Tesfaye has tired of a life of deception and has his heart set on setting up business to make cooking charcoal from domestic waste. He attended a few charcoal making workshops organized by his local kebele and is convinced all he needs is about 50,000 birr ($2500) to start up. He could ask friends abroad to wire him the money, but then there is that small problem of the missing cellphone that has his all his contacts.

Teddy Afro’s six-year sentence was eventually reduced on appeal and he was released after 18 months. “I would like to express my respect to all the people of our country,” Teddy said on state television, “I was able to meet many good people in prison, from the lowest-ranking policemen to the highest administrator. I had a nice time.”

Teddy made no mention of the phone though, it is probably still in the drawer of some prison administrator’s desk.

“My phone is imprisoned for six years,” Tesfaye lights a cigarette and orders another macchiato, “The owner got only 9 months but still my mobile is in prison.”