How a Pakistani Newspaper Stood Up for Itself Against Government, Military

The editors stood by the journalist, who also stood up staunchly and refused to reveal sources for the news, protecting freedom of expression. 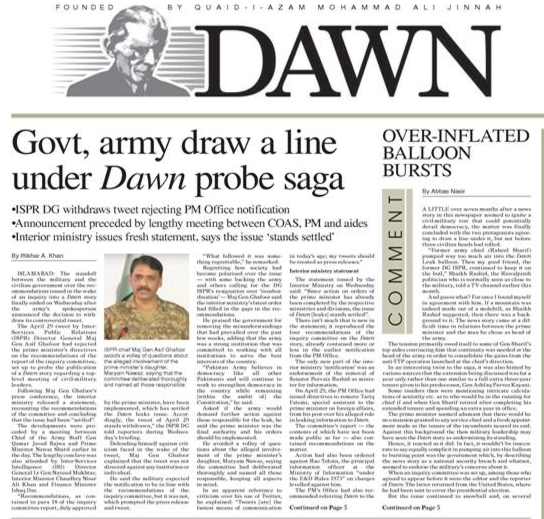 Screenshot of Dawn's e-paper on May 11th, 2017 reporting on the Dawn Leaks inquiry.

For the last eight months, an explosive news story with anonymous sources about a confrontation between Pakistan’s prime minister and the country’s top intelligence chief has resulted in several government officials losing their jobs and a newspaper being intimidated, revealing Pakistani state and military officials’ limited regard for press freedom.

Soon after the story was published in Dawn, the country’s oldest and most respected English daily, Pakistan’s information minister was fired from his job. Both the civilian government and the military believed his job was to “prevent” the news article from being published.

State officials soon began pressuring the newspaper to reveal its sources. But eight months on, the newspaper has stood its ground, sparking a conversation in the country about the rights of journalists to protect their sources, especially when it comes to “national security” concerns.

In October of last year, journalist Cyril Almeida published a front-page scoop revealing a confrontation between the prime minister and the military’s now former Inter-Services Intelligence chief, Rizwan Akhtar. The story revealed that at a top-secret meeting, members of the civilian government complained to the Akhtar that when their law-enforcement agencies took action against armed groups, his “security establishment … worked behind the scenes to set the arrested free.”

Almeida’s scoop, which cited anonymous government sources, confirmed long-suspected rumors of a rift between the country’s civilian and military leaderships over counter-terrorism efforts. The revelations have since become known as “Dawn Leaks” .

Pakistan’s interior ministry first denied the story and put Almeida on the Exit Control List (ECL), an extraordinary measure usually reserved for hardened criminals or people involved in mass fraud and corruption. When Almeida’s publication stood by him and refused to reveal their source, the government was forced to remove Almeida from the ECL and launched its own investigation into the source of the leak.

Shortly after the investigation into the leak began, top state authorities fired information minister Pervaiz Rasheed from his job, as the government felt Rasheed should have stopped the story from being published. A statement from the Prime Minister’s office read:

Evidence available so far points to a lapse on part of the Information Minister, who has been directed to step down from office to enable holding of an independent and detailed inquiry.

In a video interview several months after his dismissal, Rasheed spoke to media channels and said his job as an information minister isn’t to stop the press from publishing reports. In a video aired by several news channels, Rasheed said:

Under a democracy, one can only inform journalists about the factual errors and share your point of view with them, however, you cannot force your views on them.(…) If the state wants information ministers who can stop news stories, it should instruct universities “to teach journalism students a course, titled ‘How to block news’

An inquiry committee created to investigate the leak submitted a report to Prime Minister Nawaz Sharif recommending that action be taken against additional staff, including Rao Tehsin Ali, the principal information officer of the Ministry of Information and Tariq Fatemi, special assistant to the prime minister on foreign affairs.

The report also recommended referring Dawn to the All Pakistan Newspapers Society (APNS) for “necessary disciplinary action,” but did not elaborate on what the charges against the editor of Dawn or journalist Cyril Almeida are if any.

The prime minister’s office subsequently issued directives to remove Fatemi from his post, alleging he was responsible for “leaking” information to Almeida.

A few hours later, the director of military’s media wing said that the military had rejected the notification (the order that led to the firing of several key government members):

Notification on Dawn Leak is incomplete and not in line with recommendations by the Inquiry Board. Notification is rejected.

Under Article 243 of the constitution of Pakistan, the military chief is appointed by the president with the consultation and confirmation needed from the prime minister. Therefore the tweet from a military officer rejecting the notification issued by the head of state is seen as subordination.The tweet was a rare public contradiction of the civilian government’s orders by the military and created an uproar that exacerbated civil-military tensions in public.

This tweet by investigative reporter Matiullah Jan sums up the reactions and scrutiny that followed:

How dare a notification by prime minister is "rejected" by the officer in ISPR.

Following the uproar, the military’s media wing “retracted” the tweet and said it was not aimed at any government office or person.

What does this mean for journalism in Pakistan?

Several activists and reporters have weighed in on the issue on Twitter. Media rights advocate Iqbal Khattak shared his concern about #Dawnleaks issue being used to suppress journalism:

Netizen Hassam Tahir raises the issue of reporters being forced to reveals sources:

Journalists cannot be made to give away sources, this is not what freedom of press stands for #DawnLeaks

Journalists Umar Cheema and Nadeem Malik shared their concerns about the investigation and the subsequent firing of government officials:

#Dawnleaks issue resolved after taking jobs from 3 men; none of them had made any leak. How national security was breached? Still unknown.

Why action against a newspaper & journalists for #DawnLeaks, while saying nothing who committed "Security Breach" from a closed door meeting pic.twitter.com/xXaljAWWD6

Dawn’s editors consistently stoody by their story and Almeida despite pressure from both the millitary and civillian authorities. prompting renowned anchorperson Asma Shirazi to lauded their decision:

Salute to the editor #Dawn newspaper @abbasz55 @cyalm for the unflinching fight to protect freedom of expression.

Despite the fact that the official inquiry is now complete, the issue has raised serious concerns about the future of journalism and whistleblowing in Pakistan.