It is a visually stunning technical masterpiece that ignores the humans that made the wilderness what it is. 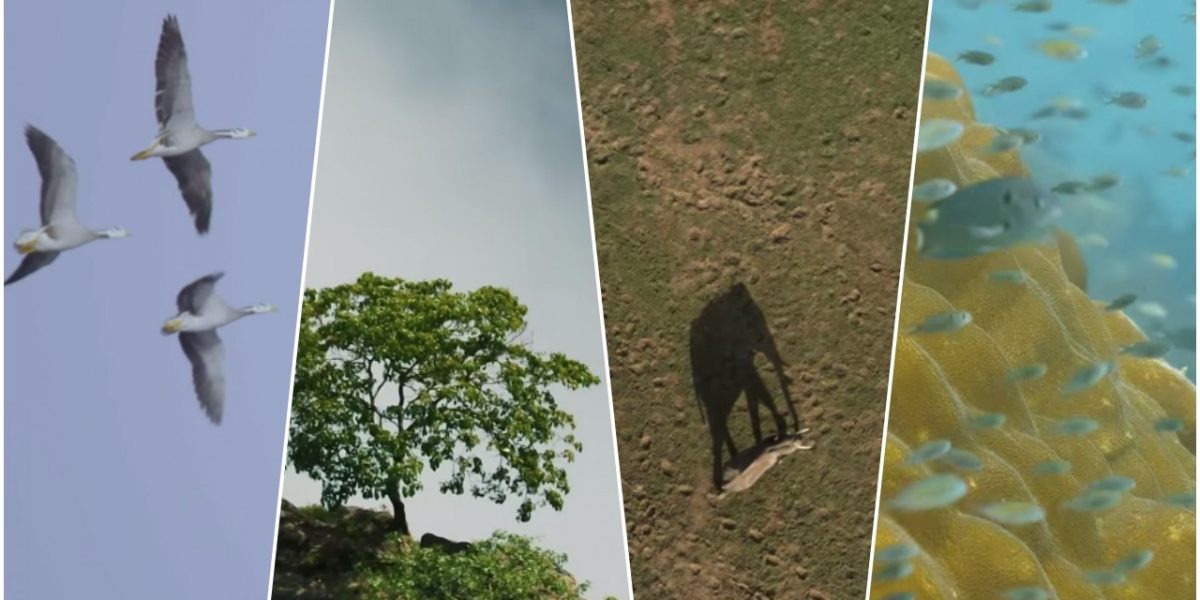 Everything you have heard about Wild Karnataka, India’s first blue-chip wildlife documentary, is true. It is a visually stunning technical masterpiece. The drone shots of elephants are almost worth the price of entry (and since the film is being screened at PVR, the price is steep).

The 52-minute runtime begins with a soaring introduction that also doubles up as the trailer, and is followed by a rather conventional set of chapters drawn as if from a wildlife handbook: tiger, elephant, peafowl, sloth, jungle cat, king cobra, flying lizard, dhole, otter, sand bubbler crab, common langur, leopard, wolves and frogs, then ending with the fiction that elephants from across Karnataka congregate at a bend in the river.

The preening, nesting, caring, hunting, eating, chasing, mating and courting scenes have been filmed with immense passion and skill. The music by Ricky Kej is appropriately cinematic for a film that aims to overwhelm your senses with colour and sound. The filmmakers have transitioned from one animal chapter to the next with artful scripting and striking landscape photography. The team, led by Amoghavarsha and Kalyan Varma, have made a film that would warm the cockles of any a nature loving heart.

The story of the film is that in a far away place called Wild Karnataka, there are some fascinating animals that live in unexplored forests and seas. And guess what – there are no people!

This is also where the joyride ends.

In Serengeti Shall Not Die, a deeply racial wildlife film released in 1960 and which defined conservation policy in East Africa for half a century, the film maker Bernhard Grzimek says, “A national park must remain a piece of primordial wilderness to be effective. No men, not even native ones, should live within the borders.” Decades of careful conservation science, environmental history and political ecology research in Africa, South America and Asia have laboured to systematically dismantle this jaundiced view.

Now, 60 years on, we have Wild Karnataka – narrated by no less than David Attenborough, the high priest of telling a “single story as though it were the only one” (to use John Berger’s words) – advancing Grzimek’s imagination of a nature bereft of history and people, in turn setting the conservation debate back half a century. Wild Karnataka ignores the history of humans in Karnataka’s forests, implying that this place is no place for people. It is worth checking who exactly benefits from this idea and what the consequences of this film could be for the people who live in this wilderness.

The film has been produced by the Karnataka forest department with funding from a range of CSR sources at a cost of Rs 2 crore, according to Better India (a figure that should have been much higher but was kept down thanks to some goodwill). But whether it is 2 crore or 5 crore, the use of such vast sums of money to create the impression that the wild is devoid of people raises a host of problems.

Also read: In Conversation With Kalkuli Vittal Hegde, the Last of Sringeri’s Farmers

Indeed, one of the funders is Sandur Manganese and Iron Ores Limited, a mining company that operates in the state of Karnataka. Mining is a big threat to forest and wildlife in India, with a significantly greater area of forest having been diverted for extractive projects in the last decade alone, together with weakening regulations and protections for forest-dwellers (both human and non-human). At a time when the rapaciousness of economic development is laying waste to Earth, the film’s decision to feast on the spectacle of the wild while collaborating with the very actors who threaten wildlife habitats is deeply problematic.

For viewers interested in a nuanced and more respectful treatment of the historical and social processes that have produced our landscapes, the outstanding BBC documentaries on the Serengeti, Amazon and Yellowstone, entitled Unnatural Histories, should be a much-watch. These films seek to undo “the dominance of just one way of looking at the world”, arguing that there is nothing ‘wild’ about any of these edenic landscapes and that they have been actively managed by native peoples using fire, axe and livestock. Herders in the Serengeti in particular managed this vast grassland through the mindful use of controlled fires and seasonal grazing. Similarly, we need to produce films set in India to counter the singular representation of the wild, as in Wild Karnataka, instead considering the Indian wildlife landscape together with the people who have used and managed it for generations.

Separating the spectacle of the wild from the lived forest is the first step towards commodifying wildlife for tourism. There have been quite a few shrill attempts to sell Karnataka thus. Attenborough himself ceaselessly invokes superlatives such as the highest number of tigers and elephants on Earth (false: Madhya Pradesh has more tigers); the highest biodiversity on Earth, second only to the Amazon (false: species diversity is higher in the forests of Northeast India and Southeast Asia); the largest cat, the largest monkey, and so on.

The film enters its final denouement in the flagship tourism site of Kabini, where the Karnataka forest department runs a high-end tourist lodge under the name ‘Jungle Lodges and Resorts’. Attenborough calls Kabini an “elephant Shangri La” and claims “hundreds of elephants from across Karnataka assemble in this jungle paradise”. Drones are deployed to striking cinematic effect to bolster this wild fiction. Elephants do congregate here but we don’t need a national registry of elephants to understand that not all elephants from the state make a beeline to this glorified hotel.

Also read: ‘We Have Hills and Forests and We Live Here’

The film ends with Attenborough declaring “Karnataka is one of the most glorious and important wildlife refuges on Earth.” This is a tall claim and one that will no doubt be contested; it is quite possible, even if it sounds surreal, that such declarations could precipitate a ‘wilderness war’ among India’s various state forest departments. Coming soon to a theatre near you might be Leonardo DiCaprio narrating ‘Wilder Madhya Pradesh’ or Akshay Kumar extolling ‘Wildest Uttar Pradesh’.

If indeed things are going to come to that, watch Wild Karnataka when you can still enjoy it.

Nitin D. Rai is at the Ashoka Trust for Research in Ecology and the Environment in Bangalore. The views expressed in this review are his own.