While the Pradhan Mantri Ujjwala Yojana is an important effort, there are many barriers to LPG uptake that won't go away when simply presented with alternatives. 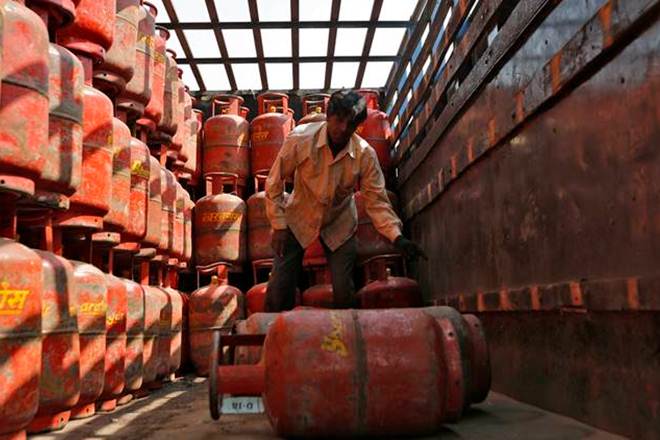 Of the 24.3 crore households surveyed in the last Census, 7 crore used LPG as the primary cooking fuel. Credit: Reuters

Air pollution is a public health emergency in India. Air pollution reduces our life expectancy by at least 1.5 years, is the leading cause of cardiovascular and pulmonary diseases, and is worsening our quality of life. In India, pollution levels have risen consistently since the 1990s, with cities on the Indo-Gangetic plain regularly featuring on the list of the world’s most polluted. Given the year-round high pollution levels across the country, there is now a growing political acknowledgement that we need to act urgently.

Of the most common sources of air pollution in India, biomass and coal used for cooking and heating and kerosene for lighting – collectively household emissions – is among the top five, followed by power plants and other industries, resuspended dust, passenger and freight transport, and open waste burning.

In India, ~673,000 premature deaths a year are linked to outdoor air pollution. Of this, up to 30% are linked to household emissions, per a policy brief published by the Collaborative Clean Air Policy Centre. An additional 480,000 premature deaths a year are attributed to exposure inside the houses. These deaths are the result of, as well as reassert, the link between air pollution and respiratory diseases, heart disease, stroke, lung cancer and diabetes. However, air pollution control efforts have for the most part not dealt with this source.

A peer-reviewed paper published on May 28 sheds more light on the significance of household emissions. Its authors found that if this source was eliminated completely, the national average PM2.5 concentration will come close to the national ambient standards.

The paper’s results also highlight another critical aspect of air pollution: emissions typically affect air quality over regional scales. Tackling pollution in a city like Delhi or Kanpur or Nagpur will need us to tackle the major sources that contribute to air quality in their ‘airshed’, which typically includes industrial emissions, vehicle exhaust, dust and burning garbage. But by applying a city-centric lens to pollution, like the National Clean Air Programme does, we neglect air pollution in the rural areas and ultimately limit the extent to which the air quality inside cities can be improved by ignoring sources outside their borders.

The household sector is a non-point source: each household includes many individual ‘polluters’ with modest contributions but together are a bigger problem. So tackling household emissions will require concerted action: access to clean fuels, well-targeted incentives or subsidies, behavioural nudges and awareness campaigns.

The Ministry of Petroleum and Natural Gas took an important first step with the Pradhan Mantri Ujjwala Yojana (PMUY) in 2016, providing LPG connections to the poorest households. As of June 2019, PMUY has apparently connected 7.2 crore beneficiaries (although the data is marred by inflation) by directly transferring subsidies to the bank accounts of women in these households. The ‘give it up’ campaign to voluntarily say ‘no’ to LPG subsidies has also helped divert much-needed funds from urban to rural consumers. 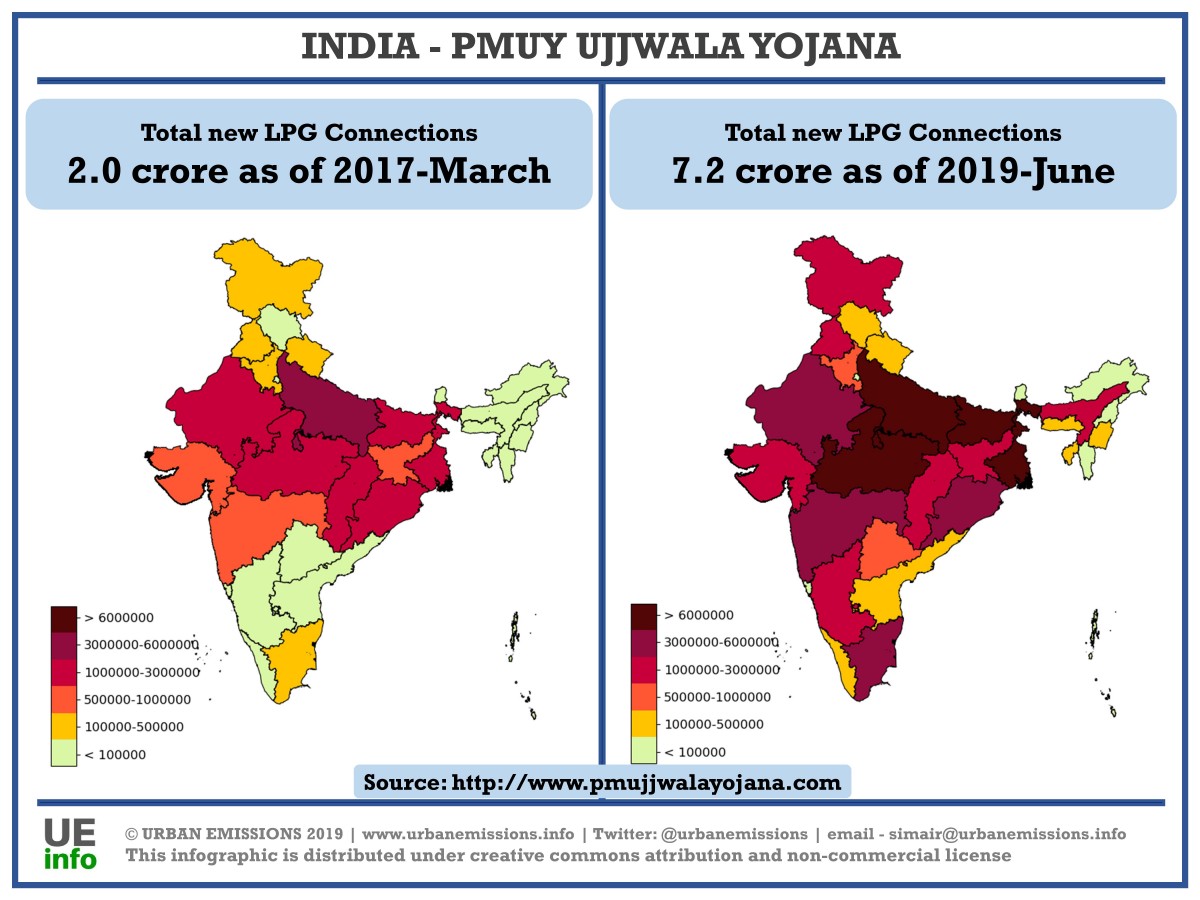 New LPG connections under PMUY, according to data released by the government. The have been reports of data inflation. Photo: Urban Emissions

Of the 24.3 crore households surveyed in the last Census, 7 crore used LPG as the primary cooking fuel. Between existing and new customers, let’s assume that half of India’s households have access to LPG for cooking. In the process, India has become the world’s second largest LPG importer: according to the petroleum ministry, net imports tripled from 4.3 to 12.7 million metric tonnes between 2010 and 2018.

By all accounts, PMUY should be considered an important mitigation effort. A two-phase survey by the Council of Energy Environment and Water, New Delhi, found that access to LPG among rural households between 2015 and 2018 increased 42% in Bihar, 30% in Jharkhand, 34% in Madhya Pradesh, 20% in Odisha, 36% in Uttar Pradesh and 50% in West Bengal. More than half of those newly connected were PMUY beneficiaries.

However, ensuring LPG is used continuously is a challenge. Firewood and dung cakes are plentiful and cheap, and traditional taste preferences are attached to food cooked on chulhas, so households have to be persuaded to change their preferences; just presenting new options won’t do.

For example, a RICE institute study found that 85% of PMUY beneficiaries it surveyed in rural Bihar, Madhya Pradesh, Uttar Pradesh and Rajasthan continued to use chulhas. The barriers to LPG adoption included cost of refills, difficulty transporting heavy cylinders in areas without proper roads, socio-economic aspects (such as women gathering biomass for fuel and not being the primary decision-makers at home) and cultural preferences for food cooked on wood stoves.

At the same time, it’s important to not blame those using biomass. There are geographic factors that encourage its use. For example, winters in northern India can be very severe; for those living without electricity, a chulha is often the difference between life and death. Instead, this is a plea to policymakers to offer alternatives so that both cooking and heating needs are met in a way that doesn’t contribute to outdoor air pollution.

Further, LPG is just one option; we need to be creative and offer other alternatives in areas where access to LPG is difficult. Solar stoves and heaters, or even efficient wood heaters, will be necessary. In cities like Delhi, where a major part of the emissions is from small (and controlled) fires in residential communities that security guards, support staff and homeless people light to keep themselves warm, an electrical heater will help.

The bottomline is that the government needs to recognise the main reasons for biomass use in Indian households are socio-economic and cultural, and promote policies that provide access to alternative fuels. The PMUY is only the start. We need to address factors currently in the way of wider uptake before the positive impact on the air pollution can be felt.

Sarath Guttikunda is the director of Urban Emissions (India), an independent research group on air pollution, issuing three-day air quality forecasts for all Indian districts. Santosh Harish is a fellow at the Centre for Policy Research, New Delhi. He tweets at @santoshharish1. The views expressed here are personal.