The data suggests that we needed a severe and widespread economic crisis for emissions to fall by a mere 1.2%. 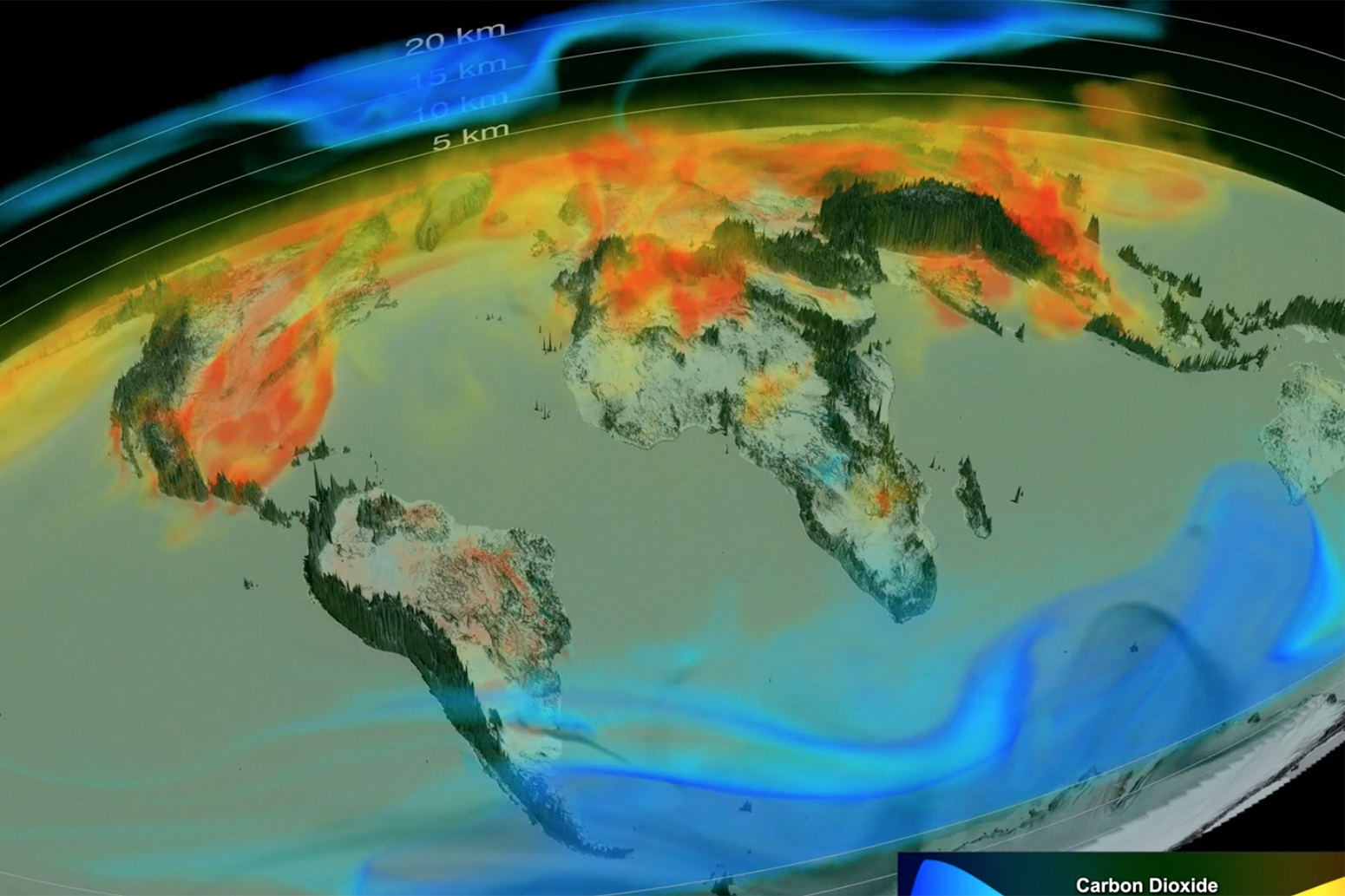 A moment in time of global carbon dioxide emissions as observed by NASA's Orbiting Carbon Observatory-2 in 2017. Credit: NASA

The world’s carbon dioxide emissions are on the upward march again, at a time when all recent climate science urges that they should be going downhill instead.

These numbers are from the European Union’s Emission Database for Global Atmospheric Research (EDGAR), considered to be among the world’s most reliable sources for greenhouse gas data. It presents such data for nearly all the world’s countries annually, with the data going back to 1970.

For one, it puts an end to the optimistic theory that the world economy is decarbonising. Three years ago, as emissions flattened even as global economic growth rose by about 3%, there was much relief, even a sense of triumph, about this in the popular press and in some of the scholarly literature. Writers hazarded that we were witnessing “a partial decoupling between the growth in carbon dioxide emissions and that in the economy”. Emissions, it was felt, would possibly stay flat or even decline in the near future even as economic growth continued. As a clear trend, that is yet to happen and will not for many years.

Also read: India Has an Ammonia Problem but No Policy to Deal With It

Second, we need to abandon conceptual categories that place countries like China and India in the same frame. The sheer scale of China’s carbon emissions and energy use makes that untenable. It is by now a truism that China is by far the world’s largest emitter: 10.9 billion tonnes (Gt) in 2017. It is followed by the US (5.1 Gt), the EU-28 (3.5 Gt) and India a distant fourth (2.5 Gt).

The per capita metric in particular, which has had considerable traction in India since at least 2007, should give us pause. China’s per capita emissions, at 7.7 tonnes of carbon dioxide, is not just over four-times higher than India’s, at 1.8 tonnes per person, but it is in fact 10% higher than even the European average of 7 tonnes per capita in 2017.

Additionally, there is simply no comparison between energy use by the two countries. According to the latest BP Statistical Review of World Energy (2018), China’s primary energy consumption in 2017 was 3,132 Mt of oil equivalent (mtoe), or 23% of the entire world’s energy consumption. India’s, in comparison, was less than one-fourth at 753 mtoe – for what are comparable population sizes, 1.4 billion for China versus 1.33 billion for India. This is to say nothing of the abysmal inequities in energy access and use within India: hundreds of millions of people still face forced underconsumption of both energy and other material goods that could contribute to their well-being.

Third, the EDGAR data reflects a political unwillingness among the industrialised, Annex-1 countries to sharply reduce their emissions. Notwithstanding all their welcome changes like, say, legislating climate change solutions in the UK, Germany’s expansion of solar and wind power, and a partial shift to natural gas in the US, industrialised countries have reduced their emissions only by a modest amount. And their reductions are lower than what the science demands as well as what is needed for countries like India, Bangladesh, those in Africa and small island nations to develop without further threatening the planet, and themselves.

Further, as experts have pointed out, developed country emissions are low because they have exported energy-intensive production to countries like China. Taking consumption emissions into account, embodied in the goods imported and consumed, would raise Annex-1 country emissions by a further 1.3 billion tonnes. And this would be on top of these countries’ historical emissions, rooted in colonialism and imperial extraction, which only deepens the inequity between these blocs.

Second, what can one glean from EDGAR data of the last decade or so, as presented in the chart below?

The numbers tell us at least three things. One, the years of massive rises in carbon dioxide emissions that one witnessed in the first decade of this century are over, with 2012 possibly the year in which things began to turn around. This is particularly the case with both China and the world in economic slowdown.

Two: However, despite emissions in 2015 and 2016 being almost flat (2016 was a leap year with an extra day, so the small rise), economic growth and a very partial energy transition will ensure that carbon emissions will rise in spurts over the foreseeable future. There are multiple and complex reasons for this. But at its core, an economic system that valorises accumulation and growth on a global scale will not permit sharply reduced emissions that the science demands.

Three: Notwithstanding the recent expansion in renewable energy sources, the only year in which carbon emissions fell with any sharpness was in 2009, following the economic crisis of 2007-2008. They were effectively flat in 2008, another leap year with an extra day, and then dropped the following year.

This is sobering because it suggests that we needed a severe and widespread economic crisis for emissions to fall by a mere 1.2%. The world’s workers are still facing the brunt of the 2008 crisis. Europe and the US are facing their political backlash. However, the science, as in the IPCC’s special report, demands far steeper cuts than that starting next year for this planetary crisis to not become much graver than it already is. How we can rapidly transition to a much lower emissions trajectory, and yet one whose burdens will not be borne by the world’s underprivileged everywhere, is the urgent challenge that confronts us all.

Nagraj Adve’s booklet Global Warming in the Indian Context: An Introductory Overview (2019) has been translated into Hindi, Kannada, and Tamil.