Why Is Narendra Modi Allowing Nitin Gadkari to Destroy the Ganga?

The National Waterway 1 project on Ganga is being developed, under Gadkari's watchful eye, to meet industrial demands with no consideration for the life that is dependent on the river, or the river itself 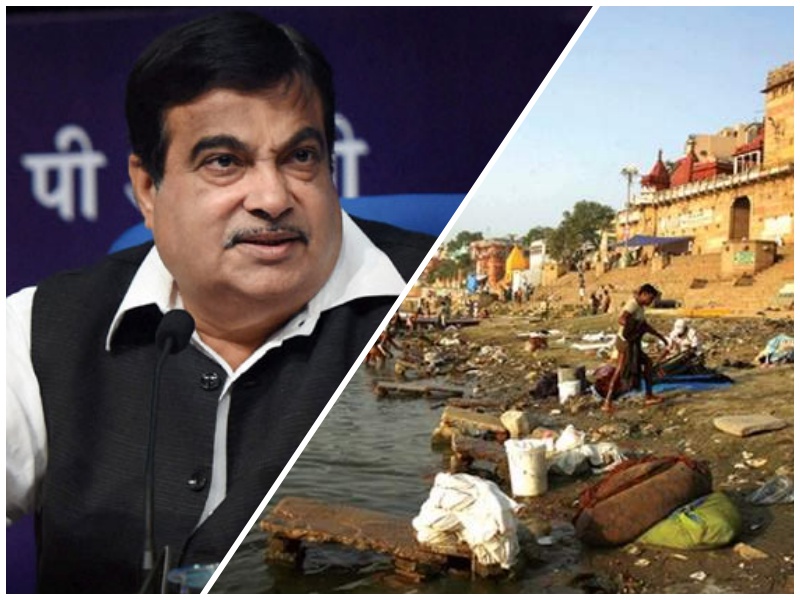 The Ganga is considered to be India’s most sacred river. Hindu mythology has it that the Ganga’s descent from the heavens gets muted as it gets entangled in the matted locks of Lord Shiva. Every 12 years, the largest religious gathering in the world, the Kumbh Mela, is held at the confluence of the Ganga and Yamuna rivers.

Despite the Ganga being so interwoven with the culture – and economy – of the country, Nitin Gadkari, the minister of water resources, river development and Ganga rejuvenation has not hesitated to destroy the river.

He also has plans to convert the Ganga into a canal that barges can use to transport coal, bauxite and other goods from Varanasi to Haldia port, West Bengal. Work on this project – to convert a living river into a navigational channel – has started without any clearances from the environment ministry.

Work is going full swing to construct a multimodal transport hub at Ramnagar (Varanasi) on the banks of the Ganga.

This multi modal transport hub at Ramnagar (Varanasi) on the banks of the Ganga will be connected to Eastern Freight Corridor (EFC) by a rail extension and also to the national highway. The EFC will extend from Ludhiana to Haldia and land acquisition for this has also started.

Similar multi nodal hubs are being constructed in Bur in Bihar and in Sultanganj in Jharkhand.

This massive construction program is being undertaken under the aegis of the Inland Waterway Authority of India (IWA). The National Waterways Act was operationalised on April 12, 2017 and will permit the setting up of shipping and navigation systems in 111 waterways in the country.

The first river to operationalise this grandiose plan is the Ganga between Varanasi and Haldia, called the National Waterway 1, with Gadkari determined that work on the Ramnagar hub be completed by 2019.

As though to show he means business, Gadkari flagged off an extravagant trial run of this on August 12, 2016 by flagging off two large vessels from the Aghoreshwar Bhagwan Ram Ghat in Varanasi for the Haldia port. The IWA has already signed a MoU with the Dedicated Freight Corridor Corporation to develop this Ramnagar hub so that cargo can be moved from Waterway 1 to the EFC or to road transport as required.

Dredging and its dreadful impact on the river

For barges to move between Varanasi and Haldia, the river will have to maintain a depth of over two metres and a minimum width of 45 metres. To ensure these levels, the government has started major dredging operations as well as the construction of barrages along the river.

Environmentalist Shripad Dharmadhikary, who has co-authored a detailed report on the National Inland Waterways along with Jinda Sandbhor and visited the Ramnagar site, pointed out, “Dredging work is going on at full speed in the Ganga. The question is where are they going to dump all the malba? Surprisingly neither the fishermen who live along the river nor the mallah (boatmen) community have been taken into confidence, although it is no secret that their livelihoods will be the first to get adversely affected.”

Part of this dredging is being undertaken by the Dredging Corporation of India while the rest of it will be done by private corporations. “The construction of riverside jetties, ports, navigational aids and control points, material handling sites, storage godowns, barges, terminuses, barge maintenance and repairing centres, refuelling points and parking areas for vessels will be given to private contractors, who are expected to complete this work by 2024,” claimed Adhikary.

The main concern of environmentalists is that these dredging operations are going to adversely impact the river water. Dredging operations make the water turbid as there is a continuous generation of suspended solids. This turbidity reduces the penetration of sunlight which means lesser photosynthesis thereby impacting both the aquatic floor and fauna and in fact the entire food chain.

An irate Vikram Soni, an emeritus professor of Jawaharlal Nehru University who has specialised on water issues, said, “There is more live carbon sitting on the soil of a river bed than there is carbon sitting on trees. Concretisation of the river bed will see huge quantities of cement and fly ash being dumped onto the bed, which will destroy the porosity of the water. With ports coming up along the river, there is going to be more concretisation. All the special functions of the river, including its metabolic functions, like the ganga jal will come to a halt once the river’s aviral (continuous) and nirmal dhara (unpolluted flow) are destroyed.”

Researcher Nachiket Kelkar, an expert on fisheries, is convinced dredging will only serve to further endanger the Ganges river dolphins, the national aquatic animals, as also fish living in these waters.

Since the Hooghly river between Haldia port to Farakka was being used to transport coal by the National Thermal Power Corporation (NTPC), the Ministry of Environment had asked the user to conduct a study on the impact of this coal transportation. The study conducted by Central Inland Fisheries Research Institute, Kolkata had found that the barge movement had reduced the fish haul as well as the fish diversity substantially. The other, even more, serious apprehension is that channel creation can require cutting into the river bed, in which case the local aquifers can get destroyed. This will result in a major loss of water from the river and groundwater from the surrounding areas.

Barrages as a solution for lean months

But the important question is, does the Ganga possess the kind of water flow that can enable large barges to move up and down the river? The river will need to be three metres deep and between 45 to 60 metres wide throughout the year to sustain these operations. The costs of maintaining such depths by dredging are exorbitant as has been pointed out by studies undertaken by Hamburg Port Consulting GmbH and UNICONSULT.

Already, 80% of the Ganga water is being diverted at Haridwar and Narora for irrigation purposes. Activists vouch that during the lean months, the river is no more than a nallah in Allahabad and they can walk across the river then. Several water activists believe that during the lean period, the Ganga does not have this kind of water and therefore water will need to be diverted from other rivers for this purpose.

Dharmadhikary had filed an RTI asking for a Detailed Project Report on the water flows of the Ganga from the Ministry of Water Resources but was informed that water data is a confidential matter, since the Ganga is an international river, and cannot be disclosed. To get around this problem of lack of water, Gadkari has announced that barrages will be constructed on the river to ensure adequate depth.

But barrages are known to cause excessive silt deposition downstream as has been witnessed with the construction of the Farrakka barrage. No state has been faced this problem more than Bihar. Siltation caused by the Farakka barrage resulted in massive flooding across the state in 2016 with flood waters entering the capital city of Patna, leading chief minister of Bihar, Nitish Kumar, to demand, “Farakka khol do, Bihar ko badh vibhisika se bachao” (Open the Farakka barrage, save Bihar from the tragedy of floods).

Cheapest mode of transport? Not quite

Why is Gadkari pushing ahead with this scheme? The spin being given by the ministry is that inland waterway transportation is much cheaper than that of railways or highways. But this is also not borne by facts provided by government agencies themselves.

The report also emphasised that road transport may appear to be more expensive but it has an edge over the other two modes as it offers door to door services thereby reducing local terminal costs. It also stated that rails have its own operational advantages of carrying bulk cargo on longer leads.

The NTPC officials who have been using National Waterway 1 to transport coal for its power plant at Farakka told the Parliamentary Standing Committee (PSC) members that “transportation costs through waterway is only slightly lesser compared to the railways since the cargo is transported one way only.”

The question water experts are asking is whether this kind of tampering with the ecology of the river is justified. On one hand the government speaks about making the Ganga pollution free and have made an allotment of Rs 20,000 crore to clean up the river, but if all the instrumentalities being used are to concretise the river, then precisely the opposite it being done. A further condemnation of this scheme has been given by the IIT Consortium which had prepared a detailed report for the government on how the Ganga could be clean up so that its aviral and nirmal dhara can be restored. They have spelled out several steps for its ecological restoration which can take place by restricting river bed farming, stopping the plying of noisy vessels, stopping dredging and ending bank modifications.

Gadkari is moving ahead with full force ignoring all these recommendations. He believes, on the contrary, in making huge interventions in the rivers, its estuaries and creeks though dredging, channelisation, river straightening, building of barrages, locks, gates and terminals without paying any heed to the destruction of the entire river ecosystem this will cause.

What is worse is the non-transparent manner in which the work is being undertaken. We have an example in the Dharamtar port where large barges are parked at jetties where their goods are unloaded by huge cranes and excavators. Excavators unload this coal at the bank of the creek and directly load it into trucks. These operations create a lot of dust thereby polluting this entire area. The coal stockpiles have been placed on the bank of the creek thus creating a threat to the creek ecosystem as the water draining from these stockpiles is entering the creek.

But the last and most frightening aspect on this is still to be expressed. Not only will pollution levels on the Ganga rise even more drastically because of coal and coal dust, but oil and diesel from vessels will pollute the river further.

And it seems like the government is not considering transporting only coal and bauxite. They have plans to push ahead with even more hazardous cargo. The RITES report has said that water transport “is the safest mode of transporting large quantities of chemicals and toxic materials with the least danger to surrounding cities” and had no hesitation in recommending that “IWAI may take up with concerned ministries for enacting regulations for compulsory movement of hazardous cargo and certain percentages of cargo by IWT mode.” The report makes no mention of the fact that if these hazardous chemicals enter the water system, they will destroy not only the river ecosystems but will pollute the water supply systems for all the cities.

It is obvious that the BJP leaders led by Gadkari believe that since the European rivers like the Rhine are used to transport goods, the same can be duplicated here without realising that Indian rivers have their own unique and living ecosystem. Indian rivers are monsoon rivers with large flood plains. Vimal Bhai who runs the NGO Matu Jan Sangathan in Uttarakhand said, “Rivers are worshipped in India- Gadkari wants to commercialise them.”

Economist Bharat Jhunjhunwala who filed a petition in the National Green Tribunal against the inland waterway project also questioned how Gadkari was being allowed to destroy the spiritual dimension of this sacred river. He said, “The BJP has no interest in Hinduism. They raise Hinduism to get votes but will not raise Hinduism for the Ganga because this goes against their commercial values.”