Why Do Delhi Roads Get Water-Logged?

Unplanned urban expansion has ignored factors such as natural slope of land. Flow of water cannot be regulated easily and hence, planning in necessary to ensure that flooding does not occur.

Why do Delhi roads flood? Everyone in Delhi asks this question throughout the rainy season. It can be answered without much difficulty. Delhi roads are flooded every monsoon because urban planning in Delhi is not only faulty, it is also ham-handed and short-sighted; it does not merely border on the idiotic, it is absolutely mindless.

These are serious charges. Let me substantiate them with a few simple examples. Of the seven cities of Delhi, Mehrauli does not suffer from water logging, even though it is highly populated. Only potholes that are not repaired properly by the municipality get water logged. The last of the seven cities is Shahjahanabad, which also does not complain about water logging and surprisingly, neither do large areas of New Delhi that were built prior to India’s independence.

The major sites of water logging are the areas where the city has expanded in a haphazard manner in the immediate post-Partition period and then in the nightmarish eruption of urban growth beginning in the mid-1960s.

You might be shaking your head in exasperation at these sweeping generalisations and saying to yourself, this fellow has got a very long rope that he is going to hang himself with soon. Sorry, but I am not going to oblige – I know what I am talking about, let me spell it out for your consideration. 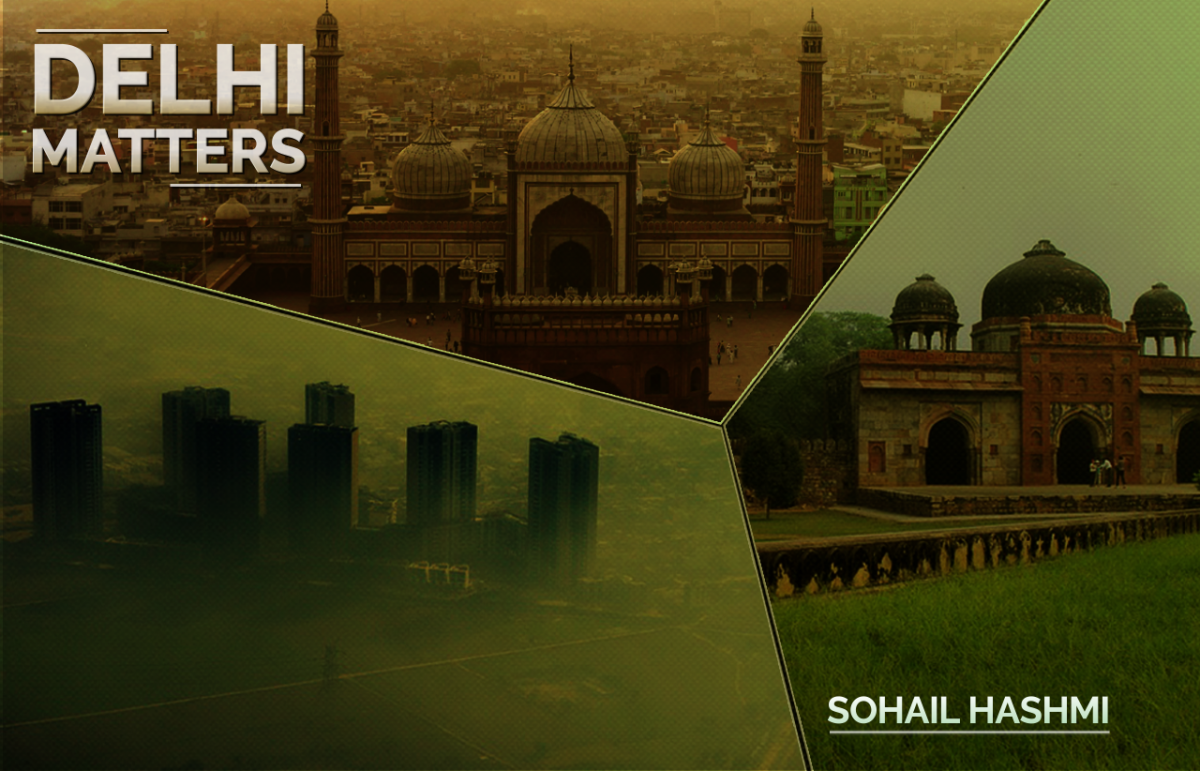 Two of the three sites that I mentioned, Mehrauli and Shahjahanabad are old settlements. Mehrauli goes back to the 10th century or thereabouts and Shahjahanabad celebrated 370 years of existence in April 2018. The foundation for the third site – New Delhi, was laid in 1011. It has not become a city yet and is not likely to ever become one, as long as it continues to be nothing more than an administrative headquarters. Without people, wholesale markets, manufacturers, its own crafts, artisans, working class, cuisine and culture, it is not likely to grow into a city. Be that as it may, those who planned it followed the same basic principle that was followed for the first two.

The principle is simple and has been followed across the world for centuries, even millennia, by those who planned cities. The principle is born of common sense. Locate your city on elevated ground and never in a depression. Do not locate your city in a floodplain, do not build residences, institutes, laboratories, workshops, factories. In fact, do not build in low lying areas, period.

We have thousands of engineering colleges, universities offering courses in civil engineering and other institutes of planning and architecture. How many of them offer a course in geography? How many sensitise future town planners of the need to understand the general slope of the land  understand the porosity of the soil they are going to be building on, the way alluvial soil and rocks behave in an earth quake?

How many architects and town planners working with DDA, NBCC, HUDCO, HUDA and other Central and state government agencies designing huge residential, industrial, commercial, institutional complexes factor these elements in their plans? What about those working with major real estate conglomerates and the countless fly-by-night, get-rich-quick real estate sharks?

When we begin to plan a new complex, do we even stop and think about the slope of the land we are going to be building on? Do we realise that the natural slope of land cannot be altered, primarily because the costs would be too high and also because slope is not something restricted to the two bits that you are working on? It was determined by geological movements and follows the geological scale. For example, the slope of land across Rajasthan and Delhi and parts of Gujarat follows the logic of the Aravalis. So when you are building in Tughlaqabad, Badshahpur, Badarpur, Jhilmil, Shakarpur, Model Town, Gurgaon or Noida, you have to keep the contours of the land in mind. 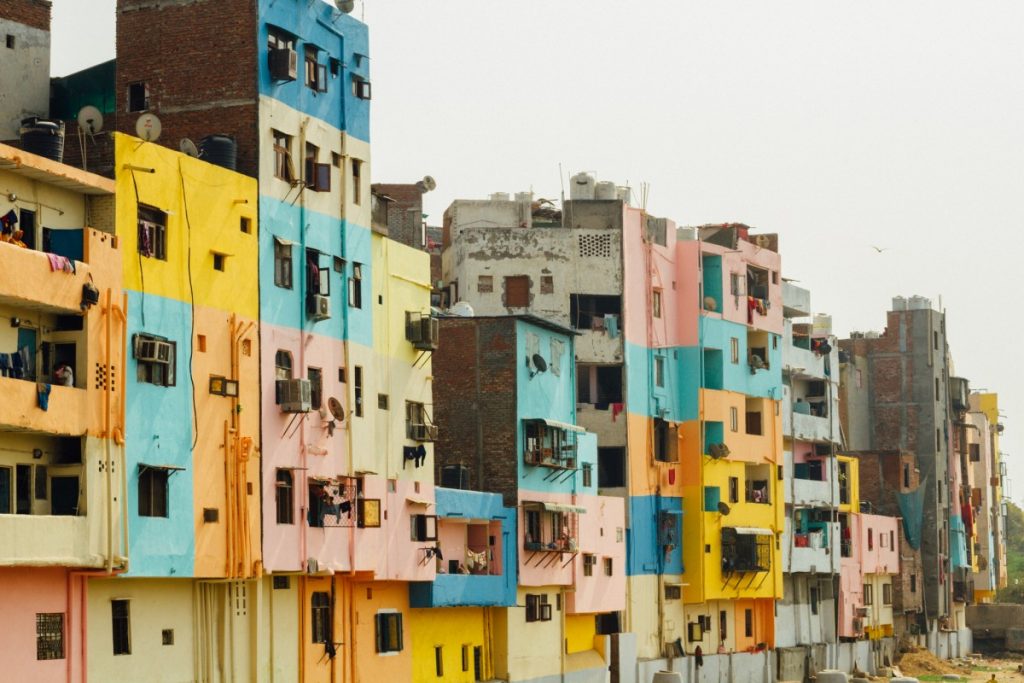 When we begin to plan a new complex, do we even stop and think about the slope of the land we are going to be building on? Credit: Adam Cohn/Flickr CC BY NC ND 2.0

Incidentally, those who did not keep slope in mind while building in Leh were in for a rather rude dunking in mud and slush. Unplanned tree plantation here played havoc with the dry desert’s soil. The roots have led to the melting of the permafrost, loosened the earth, released moisture in the otherwise cold-dry climate and led to occurrences of rain fall in an area that only received wisps of snow fall. Now there are floods and water logging because the people had also built without any regard to the slope of the land. The officials who planned this should have been sent packing to where they came from.

So, not factoring in slope of land while building is just one, but the most important reason, for flooding of our streets, residential areas, markets and malls.

A couple of examples will show how this refusal to acknowledge the natural slope leads to situations that seem to be unsurmountable. A hospital in south Delhi acquired a lot of land. A large part of it was used to build the hospital, while the remaining land was levelled and kept for later expansion. This large plot of land sloped from south-east to north-west. The hospital was built near the south-east and open land was left to the north-west.

There was a heavy downpour a couple of years ago, leading to the formation of a lake about two feet high inside the boundary wall. The management panicked and in the middle of the night, broke a hole in the wall. Water gushed out, rushing down the natural slope, gathering into a torrent towards a slum. Water entered the small shanties and fortunately, no serious accident was reported. Everything was covered in mud, filth and slush. In lower parts of the slum, water rose up to the first floor. This was not a natural occurrence. It happened because we think that we can do as we please, refusing to learn that we cannot fiddle with nature.

A lesson from history

There is a lesson to be learnt from someone who had ruled from the first city of Delhi and had built the second city. I speak of Al’a Ud Din Khilji, the second of the Khilji Kings.

Khilji was a rare man, builder, administrator and able ruler. Very few know that he was, perhaps, the only ruler in the world who stood up to the Mongols and in half a dozen occasions, succeeded in pushing the Mongols back. He was able to do this due to two reasons. He had a rather effective network of spies and found out in advance every time the Mongols planned an incursion and was able to stop them in their tracks. The other reason for his success is connected tangentially to our story.

Khilji wanted to keep the bulk of his army in one place. This was to ensure that he could move them at short notice. And so he built a garrison town known as Siri, the remains of which can be found scattered through Shahpur Jat and also hastily buried beneath the badminton courts erected by DDA, for the commonwealth games of 2010.

Now this large army needed water to drink, wash, cook and for their horses, camels, elephants, bullocks, mules and donkeys. Khilji created a huge reservoir known as Hauz e Al’ai, now known as Hauz Khas. It was created by diverting two natural streams that flowed down the slopes of Aravali, into a natural depression, behind a village known in those days as Tarbabad. Both streams that flow through the Sanjay Van and the IIT Delhi Campus, have turned into dirty Nalas today.

The point of this narration is to underline the fact that Khilji had the sense to tap the natural flow of water to provide for his army. The Aurobindo Marg, follows the old Qutub Road and the road gradually climbs up all the way from Madrasa Safdarjung to Mehrauli. We have constructed roads that cut across the natural slope and institutes enclosed in boundary walls and both obstruct the natural flow of water and so we have water logging at the Press Enclave road at every intersection from Aurobindo Marg all the way to Josip Broz Tito Marg, Adhchini, IIT, Hauz Khas, Green Park and on all the intersections on these roads. Remember the lay of the land is such that it slopes from the west to the east, from the Aravali to the Jamuna and all these roads sweep in a general south east to northwest direction, cutting across the slope of the land. That is why we have water logging on all these roads.

We will talk about the other causes of water logging in Delhi and about common sense solutions in part two of this piece. Do send in your reactions.