Who Benefits from the Ken-Betwa Linking Project? Field Notes from a Walking Tour

There is a way to increase the supply of water in the region of the two rivers without spending Rs 44,000 crore, destroying the biodiversity of the area and displacing hundreds of people from their homes. But the government seems blind to it. As the palash trees showed off their blooms and the sun roasted the green wheat fields a golden brown, the river Ken enjoyed a siesta, its clear jade green waters revealing a school of tiny black fish and a black saur (common black carp) lazily gliding through water weeds. Meanwhile on the bank of the river, fire ants marched up and down my feet and it was only the ‘cuaao-cuaao’ of a bird that broke my trance. It was time for me to walk down this river.

The Union government is determined to link the river Ken with the river Betwa. Thousands of crores have already been sanctioned for the project and only the courts block the government from beginning work. With time running out, I decided to stroll the banks of the Ken one last time before it is mechanically tied to the Betwa, ready to learn who will really benefit from the river-linking project: Tigers? Fish? Farmers? Politicians? Contractors? The water mafia? India?

‘Our river will become a sewage drain’

The Ken starts its flow from Katni in Madhya Pradesh, continuing through the Panna forests towards the Yamuna in Uttar Pradesh, forming canyons and seeding valleys with life along the way. It is home to over 50 species of fish and hundreds of plants and animals.

My first stop was Madla, Panna, about 30 minutes from Khajuraho. This is a major tourism hub, with lakhs of visitors every year. Over time, this tourism helped to transform the economies of the local riverine communities. After spending some time among the people of Madla, I realised that they are weary of the project and not just because it may affect tourism.  As part of the river linking project, the government has proposed to build a dam inside the Panna national forest and this has upset the locals. Heera Lal Prajapati, wearing a washed-out pink t-shirt, kept an eye on his granddaughter as she frolicked in the Ken, which runs five feet deep at this point. He also spoke to me about how he feels about the Ken-Betwa linking project.

“Earlier, when we had time for leisure, we came here to fish. But now all that has changed,” Prajapati told me. “There is less water in the river than there used to be and the fish population has gone down by 50%.”

Prajapati does not believe that the Ken-Betwa linking project will be beneficial for him and his community. “It will be very bad for the people who live downstream because, as you can see, the river already runs very low. Our cattle and farmers won’t have water and even the river’s waste-cleaning properties will diminish. We don’t want our river to become a sewage drain,” he said.

Like the rest of his community, Prajapati has lived through several floods. Yet he does not want the Ken to be linked with another river. “The government should help prevent floods, yes. But floods only happen in the monsoon season, so river linking is not the answer,” he said.

I spent the rest of the day visiting other communities in Madla. As night descended, I found myself sitting with three women: Bhavna Kumari, a local hotelier, Divya Singh, the president of a local chapter of the Congress party, and Joanna van Gruisen, a wildlife photographer and conservationist. The trio has been building local resistance against the linking project for years now.

All three have had their struggles with the Ken. Bhavna Kumari’s retreat has been washed away by floods on two occasions, yet she vehemently opposes the river-linking project.

“Why are they taking our water?” she demanded. “This area is already very water scarce. The water level in Panna is going down drastically and if the Ken water is further diverted, what will happen to this area? Our government is about to commit an ecocide.” 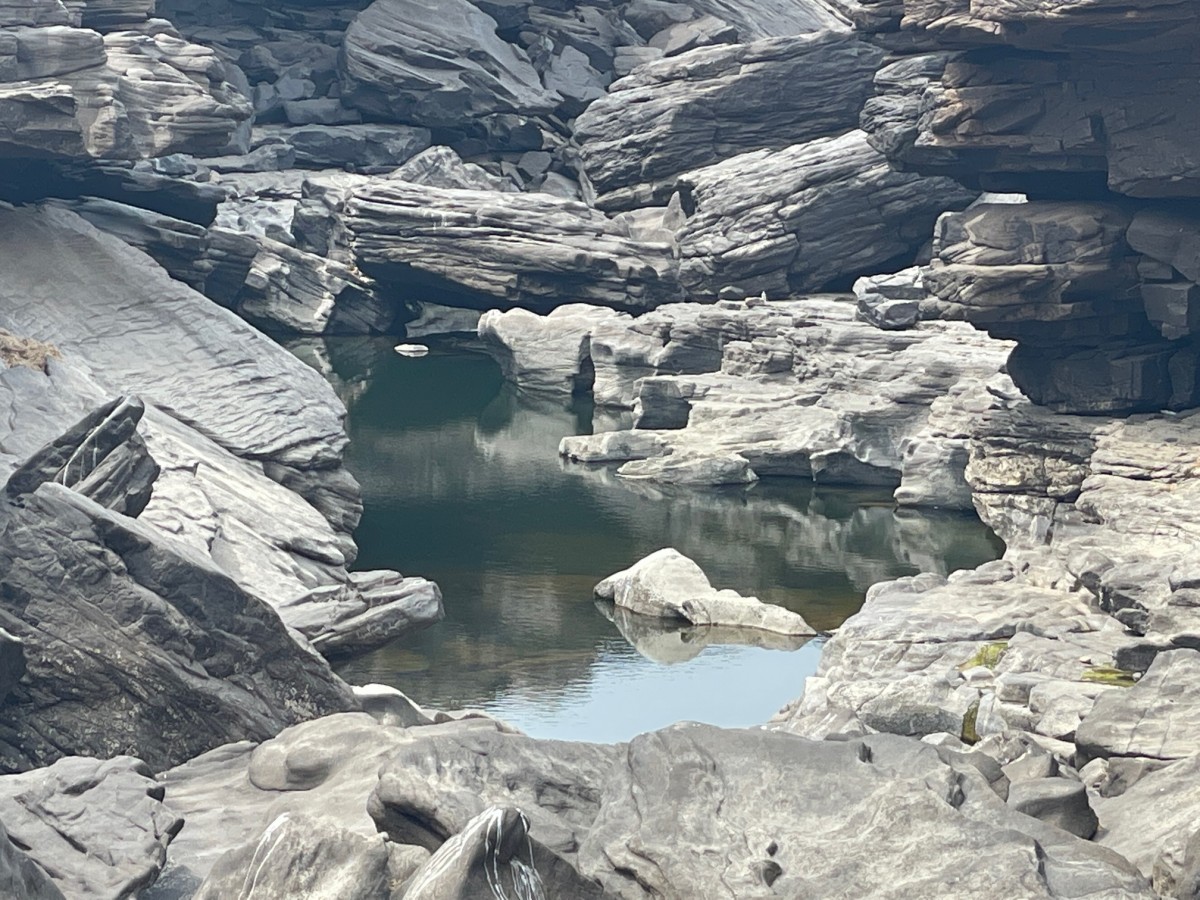 It is no secret that if the Ken waters recede, not only will Kumari’s business fail, but the water table and wells will also dry up and life in Madla will be unlivable. Over the years, Kumari has meticulously collected thousands of documents related to the project, carefully analysing them for contradictions. She believes that the government hasn’t been truthful with the data it has shared and oftentimes even misleads the public.

Could the river-linking project destroy the Panna National Park, I asked. Joanna van Gruisen spoke up. “The dam is to be built inside the Panna forest area and will destroy the tiger habitat along with the forest. The project is in gross violation of the wildlife protection acts and will be highly detrimental to gharial, vultures, etc, as well. Tigers and other wild animals will lose their natural corridors and their migration paths will be disrupted,” she said.

The courts are currently hearing the matter, listening to much the same arguments as those made to me by van Gruisen. Despite the government’s insistence that the creation of hydro-power must supersede environmental laws, van Gruisen was confident that the courts will give the Ken the justice it deserves.

Divya Singh, a native of Bundelkhand, then pointed out various inconsistencies in the river-linking project’s plans. “First of all, water availability in the Ken has been kept outside the environmental impact assessment,” she said. “The project is based on the unverified, outdated and incorrect assumption that there is a surplus of water in the Ken, without any third-party verification. The drought in the region served by the Ken has not been accounted for. Aside from this, nothing has been done as per procedure, whether it is compensation for the resettlement of the people who will lose their homes to the project or putting up public notices. It has all been done in a hush-hush way,” Singh said.

‘We need to avert this disaster’

By this time, other people had joined my discussion with Kumari, Singh and van Gruisen. Each one expressed anger towards the project. But were they all speaking the truth? I had to find out for myself.

So I spent the next three days on a wild goose chase along the Ken, with mustard fields and thick teak forests to keep me company. The area overall was dry and rivers looked like little streams. But to test the trio’s words, I stopped at Gugahri. It is one of 10 villages that will have to be resettled because the proposed dam will inundate it.

Strolling through the village I found a notice in Hindi that asked people to give their consent for the dam under article 11 of the Land Acquisition Rehabilitation and Resettlement Act, 2013, so that the resettlement process could begin. I caught hold of three residents and asked them about it. None of them had even a clue about article 11 or the notice because they couldn’t read. I was surprised.

“We don’t know what the government has said in the notice, but we are not leaving our lands,” said Dhanush, one of the residents I spoke with. “No one can remove us. We have the papers for our land. Our forefathers lived and died here, so why should we leave?” Unlike Dhanush, I had no option but to leave. My little walking tour of the Ken was over. But the question I had been seeking the answer to was still unresolved. Who benefits?

It was clear that the people in the downstream area weren’t happy. But was that enough of an answer? I needed an answer with some authority behind it, so I spoke with Amit Bhatnagar, a local organiser and a Gandhian.

“Who benefits? See for yourself.” Bhatnagar told me. “More than 40 lakh trees will be cut, thousands of people will lose their land and we are not sure whether this project will even be successful. Our politicians are corrupt and not in touch with reality. The actual costs of the project will easily touch Rs 70,000 crores rather than the Rs 44,000 crores that has been budgeted for it. The government is destroying the local habitat to benefit contractors and project managers. This is a disaster in the making.”

Bhatnagar’s answer to my question alarmed me. So since I didn’t want to leave the area despondent, I searched for a solution too. I met Sanjay Singh, a water rights activist who has worked for two decades on the conservation of water. His answer was simple: “We need to revive the traditional chandeli water ponds and traditional ways of water conservation. By doing this the government will save 20 times the water for a fraction of the cost. The Ken-Betwa project is unscientific and a disaster, which we all need to help avert.”

All images by Indra Shekhar Singh.

Indra Shekhar Singh is an independent agri-policy analyst, host of The Wire’s Krishi ki Baat and a writer. He is also the former director of policy and outreach, National Seed Association of India. He tweets @Indrassingh.