From unwise land-use change to infrastructure erected to disrupt the natural flow of waters, India's engines of economic change are actively making life worse for coastal people and environments.

A worker places sandbags on a beach in Kochi after Cyclone Ockhi struck it on December 2, 2017. Credit: PTI 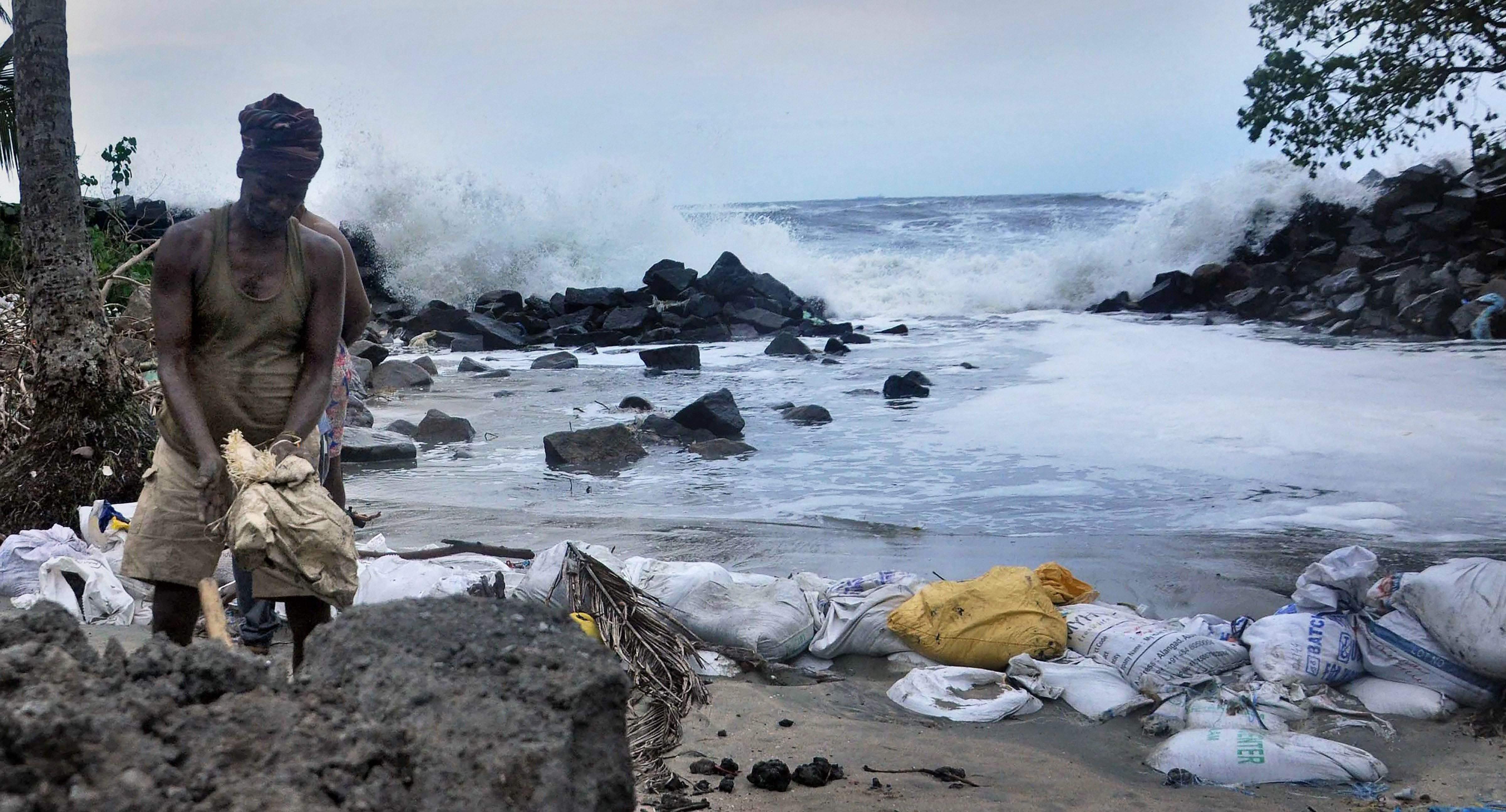 A worker places sandbags on a beach in Kochi after Cyclone Ockhi struck it on December 2, 2017. Credit: PTI

Cyclone Ockhi has come and gone, and we’re picking up the pieces of many of the same lessons from yet another natural event that ended a major disaster. As state and central relief agencies tweet out self-congratulatory photographs, questions remain on whether the disaster itself could have been averted, mitigated or managed better.

Accusations against the government disaster management machinery of mishandling Ockhi fall broadly in three categories. First, that the warning was delayed; second, that the warning was ineffective because it could not be conveyed to hundreds of fisherfolk already out at sea; and third, that the rains quickly turned to flooding because – like in Chennai in 2015 – the government’s mega infrastructure projects encroached on water bodies and water courses.

The science of warnings

Ockhi’s deadly dance was well underway barely 12 hours after the first “rough seas” warning was put out, on November 29. The weather system around the Comorin area remained a “deep depression” till late night on November 29, and rapidly evolved into ‘Cyclonic Storm’ Ockhi in the early hours of November 30. In Kerala and Tamil Nadu, the Indian Meteorological Department (IMD) and state governments were taken to task for delayed warnings.

S. Raghavan, who retired as deputy director general of the IMD, clarified on the allegation that the cyclone warning was not given in time. The duration of advance notice that is possible for a cyclonic storm, according to him, is not just a function of technology. The circumstances under which a low pressure system evolves into a depression or a severe cyclonic storm also dictate how much advance notice can be given.

“If a depression evolves into a storm far from the coast, it is easy to give plenty of notice. With the 1990 [Machilipatnam] cyclone, a five day notice was possible, and a large scale evacuation was conducted,” he said. Ditto with Phailin, which began as a tropical storm in the Gulf of Thailand and had a long trail before making landfall in Odisha.

With Ockhi, however, the evolution of the low pressure into a deep depression and then cyclone happened just 60 km south of Kanyakumari, leaving very little time between warning and event. “I am not convinced the short notice is a lapse of the IMD. It is the nature of this cyclone,” he said.

However, even if the warning had been given a day or two earlier, Ockhi’s carnage couldn’t have been averted. There’s a reason why.

The devil and the deep sea

The first ‘rough seas’ warning was issued on November 29. Such conditions may have deterred fisherfolk in other parts of Tamil Nadu but to those in Kanyakumari, they could just have been a nuisance. This is because Kanyakumari has the highest density of fisherfolk and the second highest population of fisherfolk in Tamil Nadu, with 40,000 families squeezed along a 72-km coastline. Given the limited fish resources in the nearshore waters, a bulk of the fishers have diversified into deep-sea and long-distance fisheries and venture long distances off the shore.

Fishing voyages last from eight or 10 days to more than a month (as in the case of the shark hunters of Thoothoor). These voyages are undertaken in 12-15-metre-long wooden gillnetters, trawlers and long-liners of local construction. These are working boats with bare facilities.

The November 29 warning and the fishers’ own reading of the seas’ condition may have prevented boats from venturing out. But those who had already left on their 10-day, or longer, voyages were out at sea with no way to be reached.

This is where the criminal lapse on the part of the state and central governments lies. According to Siddharth Chakravarty, a former merchant navy officer, India’s marine safety laws are borrowed with little or no modifications from international maritime ones that were keeping big commercial, merchant operations in mind. So conventions of the International Maritime Organisation, such as ‘Safety of Life at Sea’ or the ‘Global Marine Distress and Safety System’, enumerate the kinds of gear and communication equipment to be carried by seafaring vessels.

However, the international codes apply only to vessels more than 20 metres long. Indian lawmakers never paid attention to the fact that more than 90% of the country’s marine catch is landed by small crafts, including by those that venture out of territorial waters.

Worse, existing laws do not allow deep-sea fishing vessels – of the kind that were caught at sea when Ockhi set in – to carry communication equipment that could have helped them access weather warnings from shore or other nearby ships. Our laws actually condemned them to their fates; disaster management was restricted to the ham-handed rescue efforts that followed the storm.

Kanyakumari’s fishers carry handheld VHF (very high frequency) receivers that have a range of 5-6 nautical miles (9-11 km), according to Chakravarty. This is of no use in the deep. Satellite phones and other devices that could have been used to facilitate boat-to-shore communications have been denied to fishers citing security reasons. But for Kanyakumari fisherman Kurumpanai Berlin, the real reason is something else. “We have begged and pleaded for some system that allows our fishers to get updates while out at sea. India claims to be a superpower but we continue to fish with the most primitive technology. Is it not possible to secure India without sacrificing us?” asks an irate Berlin.

The nature of our urban centres is such that every time it rains heavily, it floods. Such disasters, unlike those faced by fishers at sea, are caused not by the lack of early warnings but by unwise land-use change and a drought of integrity in the regulatory agencies tasked with safeguarding public assets and the environment.

Between the mega-ports (Sagarmala) and the road and railway lines (Bharatmala) radiating out of ports into the hinterland, the infrastructure of mega-commerce may be seen by some as engines driving the Centre’s ‘Make in India’ campaign. But if you ask the fisherfolk of Enayam in Kanyakumari or Ennore near Chennai, where port-based projects have been proposed, they will tell you that Sagarmala and Bharatmala are nothing but garlands of death for coastal environment and communities.

The heavy rainfall associated with Cyclone Ockhi has only confirmed these fears.

For another example, the National Highways Authority of India is building a second NH47 from Kanyakumari to Nagercoil, in defiance of opposition from the local people. M.G. Devasahayam, a retired IAS officer who now lives in his hometown of Kanyakumari, calls this the ‘duplicate highway’. “Just south of Suchindram, a bypass road skirting [the] town takes off from the duplicate highway,” he said. “This is being built on paddies and low-lying lands.”

This road bounds the western length of the famed temple town and runs north towards Nagercoil. The town’s eastern boundary is the Palayar River, which joins another stream just south of town. The road being built pays no attention to the water’s need to flow. Suchindram drains in a southeasterly direction through the Palayar River, which then empties into the Indian Ocean through the Manakkudy estuary. But the bypass road slices across the main river after its confluence with the other stream in the town’s south.

As a result, heavy rains on November 30 saw waters backing up into the Suchindram temple. Large parts of the town were submerged. The duplicate highway’s bypass, shaped like the bund of an irrigation tank, loomed like a deadly garland around Suchindram, blocking Ockhi’s waters from draining into the Palayar. The town was saved only after the road was cut in three places on December 1.

The Tamil Nadu State Disaster Management Authority tweeted: “DC orders road cut to mitigate situation in Sucindram town.” While the action of the district collector may have saved the town, the tweet hides the fact that previous administrations and the environmental bureaucracy, not to mention highways engineers, had failed to accommodate the water’s need to flow.

“The road cuts enabled the waters to rush to Manakkudy estuary, where they filled up the 1,000-acre salt marshes near the estuary to four feet,” Devasahayam recalls. This is an area naturally designed to hold excess waters as they wait their turn to drain out through the river’s mouth. But Devasahayam warns that, even as we are battling one disaster, the government is building up for the next: “The government wants to build an airport over the Manakkudy salt pans.”

As disasters go, natural ones like the Chennai floods and Cyclone Ockhi pale in comparison to the disaster that our governments have become.